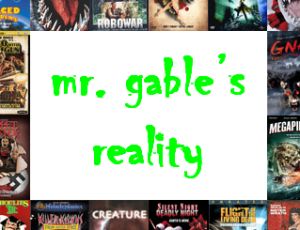 Today I am pleased to present a guest post by Mr. Gable, my go-to guy for any horror, cult, or Z-grade movie. Mr. Gable’s Reality is your one-stop shop for all things bad. If it’s a bad movie, Mr. Gable has seen it. Are you too scared to rent Killer Condom? Too intimidated to watch every movie Tim Thomerson ever made? Unwilling to use the phrase “eternal bloodlust for stabfucking people with knives” on your own blog? Then call 1-800-Mr-Gable, my friends, because he will do all that and more!

Now seems like a perfect time to remind you all that the next Netflix Instant Bad Movie Twitterthon is coming up this Saturday — and this time we have a theme! I’m not sure I can reveal this super secret amazing theme without blowing your damn minds, so you’ll just have to come to the Twitterthon and see for yourself. Check Mr. Gable’s Reality later this week for more details.

And now, the eagerly-awaited feature event: Mr. Gable’s entry on the Roger Corman classic Attack of the Giant Leeches. 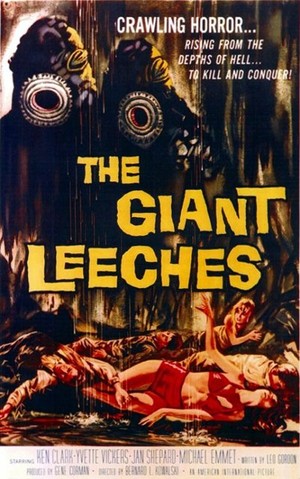 Attack of the Giant Leeches is a movie about love, loss, and Giant Leeches eating people. Would we want our Roger Corman movies any other way?

I learned some valuable lessons while watching Attack of the Giant Leeches.

1. Giant Leeches are terrible swimmers. In fact, they kind of just flail around until they move somewhere.

2. Moonshine is MANDATORY while in the swamp.

Roger Corman is a household bad movie name. You know when you see that giant banner on the front of a movie poster proclaiming, “ROGER CORMAN PRESENTS:” that you’re in for a whole heaping pile of awesome. Watching Attack of the Giant Leeches just reinforced that statement. Whether you’re watching this, Galaxy of Terror, Carnosaur, or Sharktopus, one thing remains constant: Roger Corman’s brand of bad movies remains the same from humble beginnings to ancient experience. The guy is awesome.

Seriously. These movies are absolutely ridiculous. Yes. I get it, you get it, but you know when you see that title sitting on the shelf, you just gotta see it. It’s kind of like that ex-girlfriend/boyfriend that was really into S&M. You’ll take your beating and walk away with a smile. 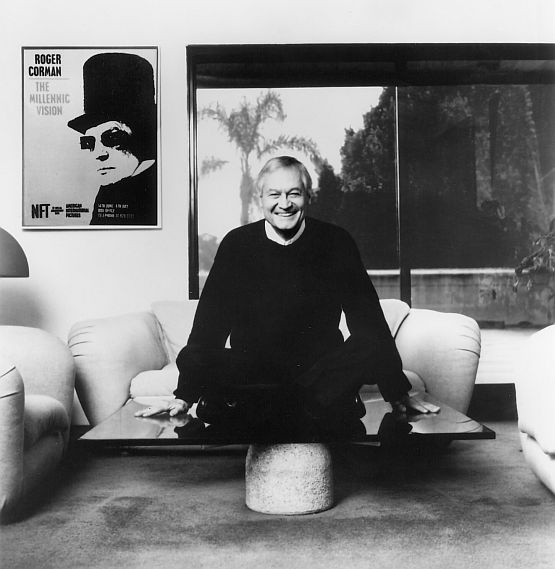 Attack of the Giant Leeches. This movie is just a hair over an hour long. And the first 30 minutes is nearly LEECH FREE! That’s…not good. But there’s an interesting little love triangle that takes place between a fat old shop owner, his smoking hot floozy of a wife, and the shop owner’s hunky friend. (And gun toting, gator fuck upping Rednecks. Lots of Moonshine swillin’ rednecks.) This all eventually leads out to the swamp where the hunky guy and hot chick are ATTACKED! by giant leeches. That’s about it. Then the cops figure it’s the fat guy with the shotgun but then there’s a scientist who’s been hanging around that figures there’s something strange going on. For whatever reason, the gators are all gone. Something scared ’em away. And ain’t nothin’ scares a gator. Nothing. So long story short, they throw a ton of dynamite into the swamp and take care of this little problem. (Don’t worry, that’s not a major spoiler. It’s just how townfolk solve problems.)

I wish ALL Roger Corman movies would follow this formula a little closer. For some reason 90 minutes or more has been engrained into our society so much that we feel cheated if it’s anything less. I bet if you’d shorten half the Corman library down to 60 minutes you’d have 50% more action, 75% less “story”, and 100% more love for his movies. I liked Attack of the Giant Leeches. Yeah it’s old and in black and white but…it was hardly painful. Just as you’re getting sick of watching it, the leeches attack. And just as you’re getting sick of watching leeches attack…it’s over! 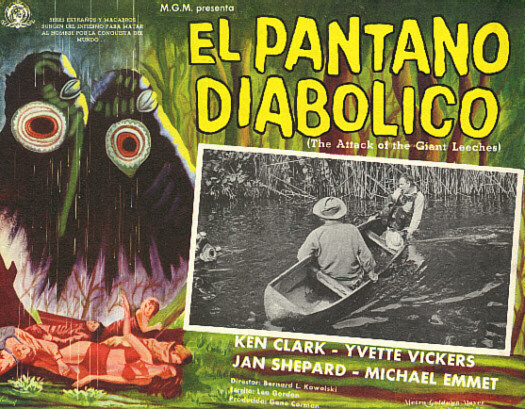 Actually, I was really starting to enjoy this movie…right up until they insinuated that their Giant Leech problem was caused by NASA. FUCK YOU Giant Leeches. NASA IS AWESOME.