This is my entry for Ivan’s Dick Van Dyke Show Blogathon, celebrating the revolutionary sitcom that first aired 50 years ago today! 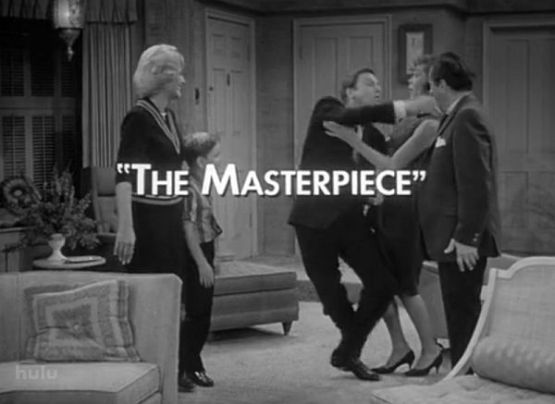 “The Masterpiece”
Season 3, Episode 2
Rob sidesteps the ottoman! He then spazzes out and almost falls on Laura.

“The Masterpiece” was the second episode of season 3, nestled between the classics “That’s My Boy???” and the two-parter “Laura’s Little Lie.”

Laura Petrie has decided to attend an estate auction, and Rob, Sally, and Buddy have tagged along, ostensibly to do research for their writing gig at “The Alan Brady Show.” You have to admit, “The Dick Van Dyke Show” had a pretty good conceit going with the team of comedy writers, because you could have them do almost anything under the guise of research. Today’s guise: Estate auction.

Sally wants to turn everything into a lamp, Buddy has a punny crack for everything he finds, and Rob tells Laura just how much she is allowed to spend. You know, just in case you forgot the show was set in the early 1960s. 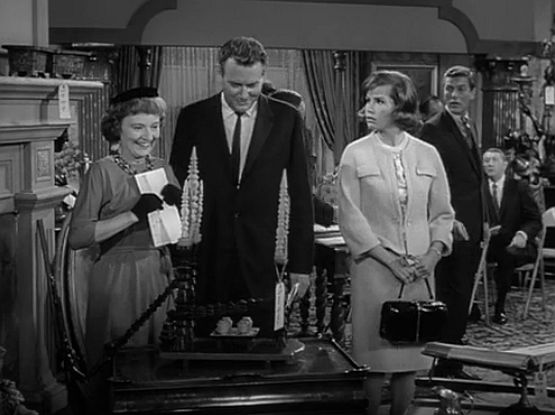 Laura finds a thing she loves. Unfortunately, character great Amzie Strickland loves it too! Laura gets her allowance upped by digging her nails into Rob’s arm and wins the thing, a thing that is so unidentifiable that even the auctioneer doesn’t know what it is. Up next is a truly rotten clown painting signed by Artanis, which spurs quite a few jokes from the writing gang.

Rob Petrie is really boring. I always forget this for some reason, I guess because it’s such a common trope in ensemble sitcoms. The lead is slightly kooky at best but mostly normal, surrounded by complete nutters in the supporting cast. In the opening act of”The Masterpiece,” most of Rob’s lines are basically throwaways or setups to someone else’s punchline… 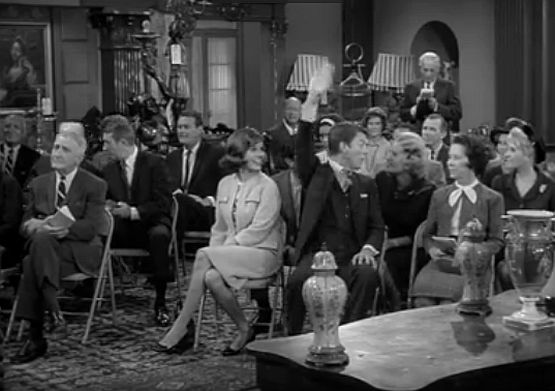 …until the birth of the sitcom staple: The accidental auction bid. 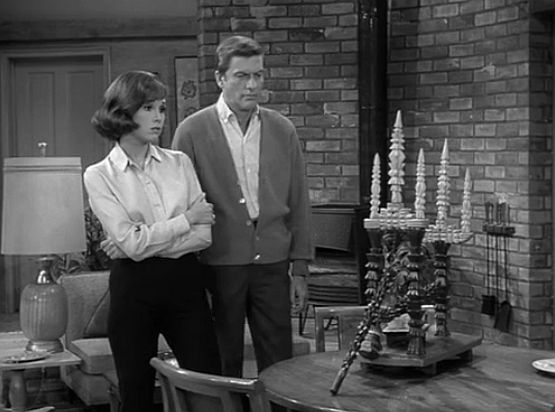 The Petries get home, Laura dons her jazzy capris and gets to work deciding where to put the thing while Rob stews over the Artanis. He quickly realizes that there is another painting underneath and, after liberal application of turpentine, reveals what he thinks is a Grant Wood. 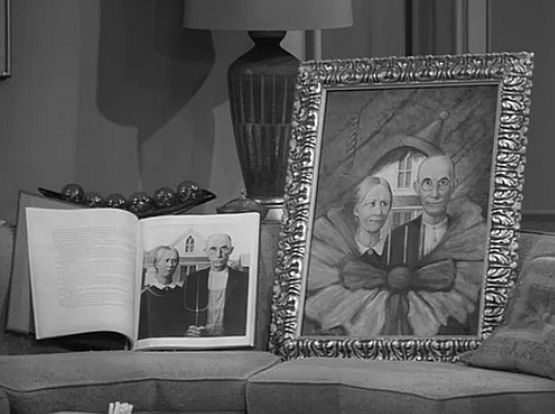 Rob contacts an artist the auctioneer recommended, Mr. Holdecker, who comes to the house to appraise the situation. Mr. Holdecker is Howard Morris, and now you know the real reason to watch this episode. 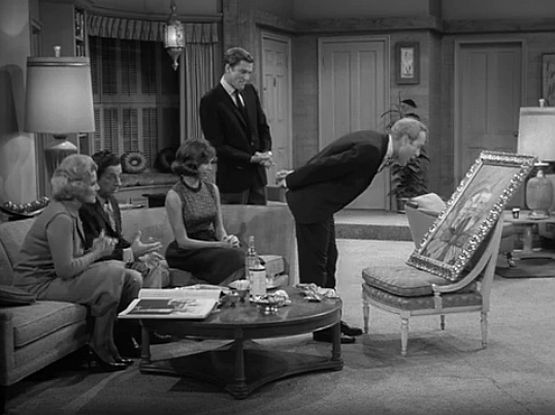 Fame is fickle, and I don’t think you can find a better example of said fickleness than by looking at the career of Howard Morris. By the time he appeared on DVDS in “The Masterpiece,” he was famous for his unhinged charm on “Your Show of Shows,” voice work as Beetle Bailey on the animated show, and feature film appearances in The Nutty Professor and Boys’ Night Out. The studio audience clearly knew who Howie was, because his every step, every syllable, every breath elicits an anticipatory chuckle. Morey Amsterdam can be seen gazing at Howie with expectant awe; Dick Van Dyke has to stop himself from laughing. Howie was loved.

Morris’ career didn’t exactly end at “The Masterpiece.” In his future was Ernest T. Bass, Dr. Lillolman, Atom Ant, Splash, Wade Duck, and dozens of directing gigs. Yet back in the early days of the internet, roughly 15 years ago, I encountered a relatively large group of people who had no idea who he was. At the time I was young and even dumber than I am now, so I thought dead pools sounded like a lot of fun. I entered a well-known pool and I listed Howie in my entry. This dead pool organization curtly informed me that there was no celebrity named Howard Morris. I explained who it was; no one else on this particular Usenet group knew who it was, either. In 1995, all those 40-something Usenetters didn’t remember Howard Morris! I ask you.

The good news is that Howie lived a solid decade after that, which means for once I did not accidentally jinx a celebrity with my foolishness. (Again, Dana Elcar, I am so sorry.) More good news is that you can’t step foot on YouTube without being accosted by the classic Uncle Goopy episode, and everyone on the internet knows who Howard Morris is. This is scientific fact. The man had an excess of talent, so his fame is now as it should be. 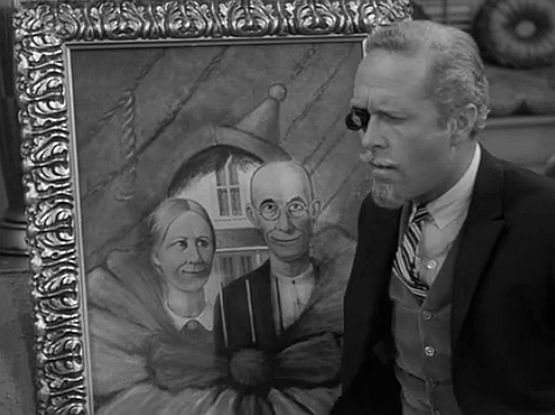 Mr. Holdecker arrives, requests wine, approaches the painting. It’s good, he announces. When the cheers subside, he clarifies: It’s not good, it’s Goode, as in Nathaniel Goode, a well known imitator of Grant Wood. No one wants one of Goode’s paintings except for a few chuckles and maybe the frame. “Goode kids around too much,” says Holdecker. “Look at that smiling, it’s terrible!”

There’s more bad news! The painting Rob has wiped away with turpentine was by Frank Sinatra who signed his name backwards as a pseudonym. That painting was worth quite a bit. “You know, it’s too bad you schmutzed it up,” says Holdecker in a line I have quoted for decades. 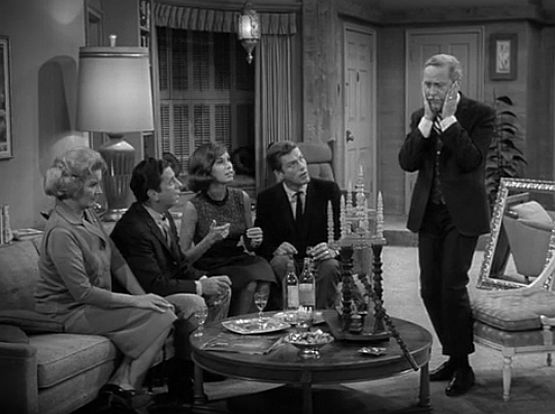 But what of the thing? Laura proudly shows it to Mr. Holdecker, who is enchanted. His mother had one of those things! When asked what it is, he says “Eine zach! A thing!” That’s probably gibberish and not German, by the way. “A thing” would be ein Ding, but I suppose Howie could have been saying eine zinke, which means “a prong.”

Mr. Holdecker explains that his father knew what to do with eine zinke: He took the handle and smashed the rest of it to smithereens. Sadly, we do not see the thing smashed, only an approximation. 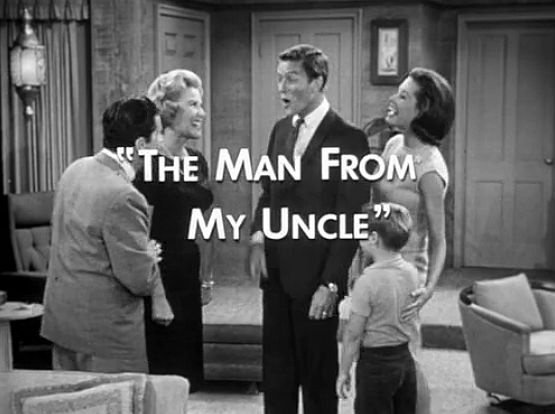 The Man From My Uncle
Season 5, Episode 27
Rob sidesteps the ottoman again, then brags about it like this is a huge accomplishment.

Rob is not only boring in this episode, he’s bored. With a day off work, he has resorted to wearing funny hats and making Polish jokes at his wife’s expense. The boredom is broken by the arrival of a federal agent who wants to use the home to spy on Mr. Gerard across the street. Mr. Gerard’s nephew is running some kind of racket, so they want to station an agent in Richie’s room to keep an eye on the house. This is one of those episodes where Richie is conveniently off somewhere. I’m surprised anyone remembered they even had a son. Just say the bedroom is where Rob stores all his toys, we all know that’s what’s going on anyway. Don’t hide it anymore! 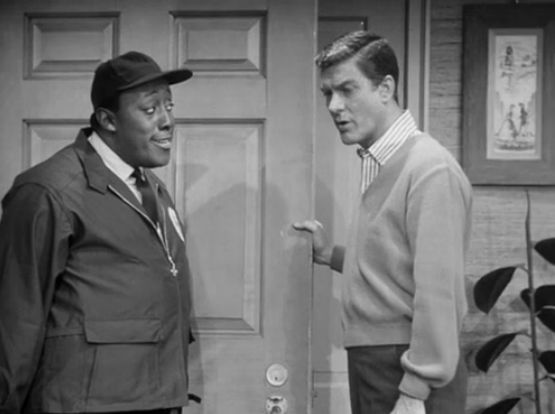 The agent arrives disguised as a television repairman… and it’s Godfrey Cambridge! Yaaaaaaaaaaaayyyy! Cambridge is agent Harry Bond (“no jokes, please”) and his presence livens the episode up a bit. Rob is as excited as a kid that a G-man is in the house, so he bugs poor Harry about his equipment… 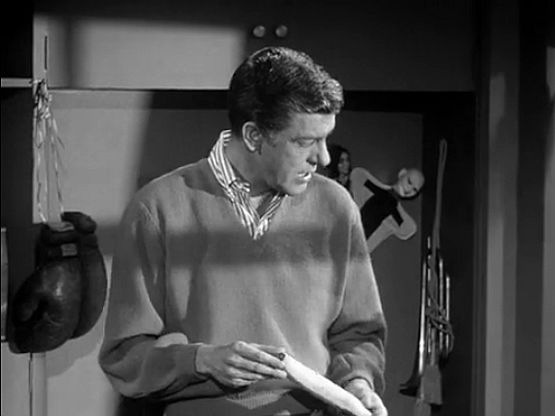 …and about his lunch. Leave Godfrey’s banana alone, Dick. It is not for you.

Harry speaks over the walkie-talkie with a fellow agent who sounds a lot like Jason Wingreen, but the role is uncredited so I can’t be sure. Maybe it’s Biff Eliott, the actor who played the first agent to arrive at the house.

Harry is suffering from a toothache so Rob convinces him to rest while he looks for Mr. Gerard’s son. Rob fools around with an infrared camera and takes a photo of Harry while he’s dozing, and Godfrey’s weary “Why did you do that?” is absolute gold. 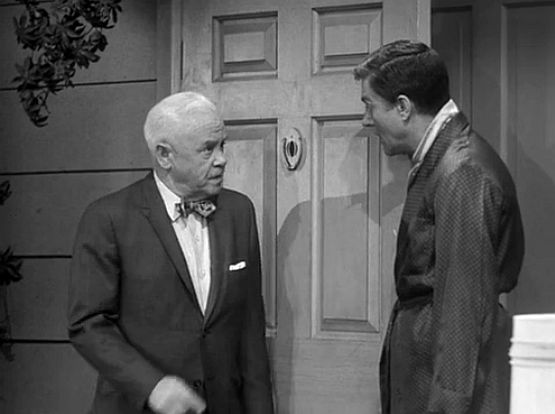 In a shocking twist, Mr. Gerard comes over to the Petrie’s house. It’s Steven Geray! Yaaaaaaaaaaaaaayyyyyyyyy!!! The poor man is beside himself, trying to tell the Petries he needs help turning in his no-good nephew while they cower in comedic fear because they think he’s a criminal. The best bit is when Mr. Gerard takes out the gun he swiped from his nephew, and you can tell the audience is starved for laughs at this point because they practically go into hysterics while Rob and Mr. Gerard toss the gun back and forth in a pretty decent panic shtick until Harry comes in to calm the situation down. 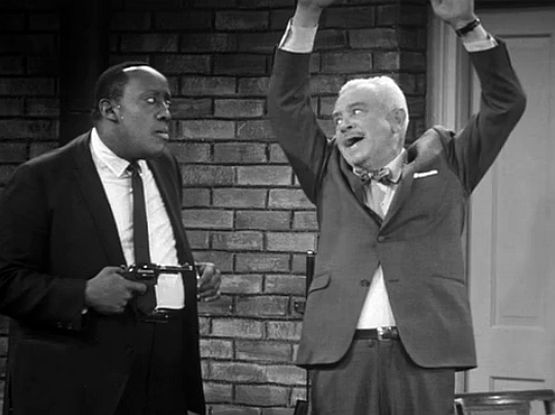 This is the kind of thing I live for, kids: Godfrey Cambridge and Steven Geray in a scene together. Absolute bliss.

Harry figures out quickly what Mr. Gerard wants, they go across the street to apprehend the nephew, and Rob follows wearing the goofy hat he had on in the beginning.

Paul Cullum at The Museum of Broadcast Communication interestingly considers “The Man From My Uncle” an example of reflecting the Kennedy-era zeitgeist, although I personally believe the G-man references and Rob’s childlike obsession over the agents hearkens back to movie serials of the 1940s that he undoubtedly grew up with. There is very little Cold War about this episode; in fact, the agents are low key, quiet, friendly, and professional. There is nothing cinematic or sinister about them at all, which must have been deliberate. The focus was on the funny, but that is not to say the episode lacks statement. There is no mention at all about Godfrey Cambridge being black or a large man in this episode. No comment at all about Biff Eliott’s glorious East Coast accent. Not a single mention that Mr. Gerard is French.

It’s shocking to watch this episode nowadays because the focus of humor in our era is almost entirely based on superficiality. Can you imagine a French neighbor in a modern sitcom not being the target of French jokes? A black character who doesn’t have to put up with a cluelessly nerdy white male lead trying to act hip? A fat guy whose weight isn’t mentioned? No implication that Biff Eliott was a mobster?

And yet, this episode has a subtle but clear Polish joke. One would dismiss this as a symptom of a transitional stage, an era where some things were still considered acceptable… but what have we transitioned to? “The Dick Van Dyke Show” had an easy sophistication that simply could not exist today, and even with its flaws this show from half a century ago is more mature and tolerant than what is produced today.