Be ye warned: There be spoilers. I don’t reveal the murderer, but I reveal a lot of important plot points.

The Lady in White (1988) was mentioned in a double feature post last year on the now-defunct The Dark Sublime, and was accompanied by screencaps of delicious fall scenery — I knew I had to see it. 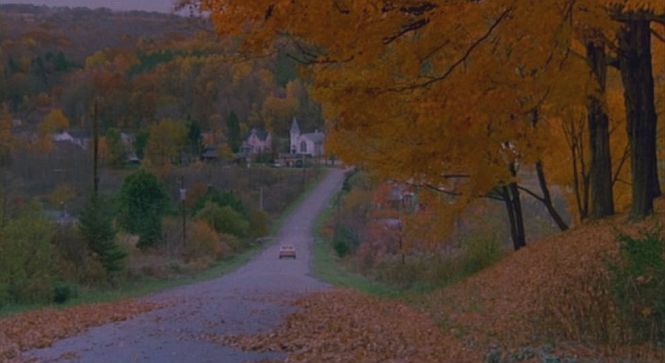 The Lady in White is nostalgia overload. Impossibly perfect fall landscapes and cute kids in adorable costumes overcrowd the first act of the film, and I quite frankly would watch this again just to see the opening 20-odd minutes. I feel the same way about the brief outside shot of Gimble’s at Christmas in Fitzwilly or the parade and shopping mall scenes in A Christmas Story. They induce sentimental warm fuzzies all around, even though I wasn’t alive in any of those depicted eras. 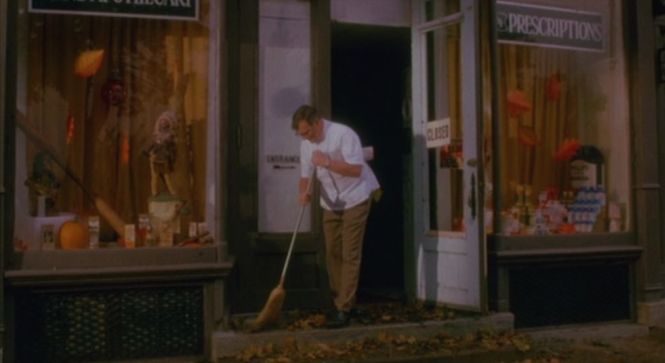 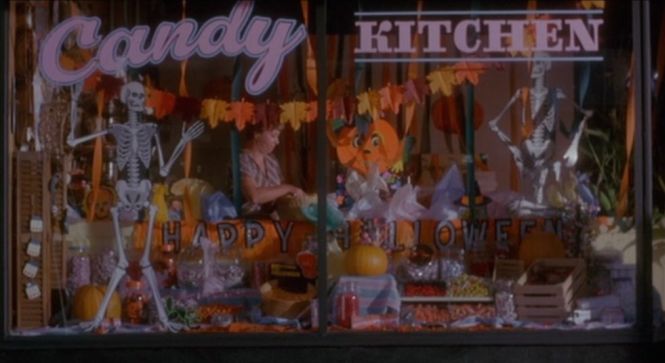 There are some genuine scares in the film, mostly due to the immediate impulse to protect a young child who is bullied by racist asshole kids and then attacked by an adult molester. The actual business of ghosts seems detached and flat when compared to the family dynamics at play and the usual Bildungsroman elements one expects in a story of this type. 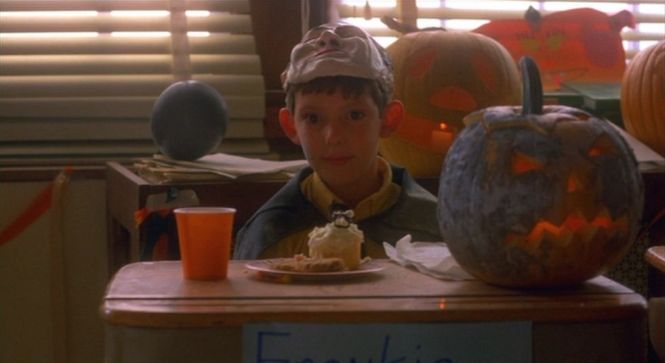 Despite the charming and effective world created for this film, there is some inexcusable tastelessness that would give most viewers significant pause. Frankie is locked in a school coat closet after hours by some bullies, and hours later sees the ghost of a little girl. She’s led away by a man, obviously a pederast. The man is first an apparition, then returns as a real man, someone who had been in the coat closet many years before when he lured and killed the little girl Frankie saw the ghost of. The man in the cinematic present of 1962 returned to the closet looking for something he left behind during the crime. Because of planned school renovations, he was afraid the item he accidentally dropped in the duct work all those years ago would be found and implicate him.

The day after Frankie’s attack, the newspaper reports on the previous unsolved murders of several kids over the years, which is difficult to stomach. It’s not taken very seriously by the town, this idea of a serial pederast who apparently molests and murders kids, living amongst them — and obviously the guy has gotten away with it for decades. 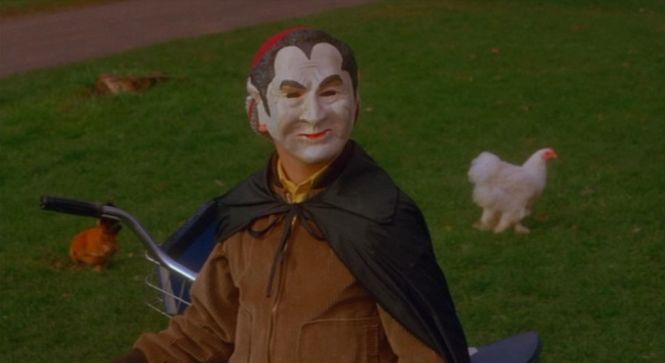 To add to this questionable movie morality, a black school janitor is arrested for all the crimes. The film uses the inherent racism in the town as a commentary on the civil rights movement during those years, but does so more to show Frankie’s dad as a nice guy than anything else. Further, the way it’s presented forces the audience to hate the mother of a child who was killed years ago by this serial murderer, because her racism is violent and rampant. After the janitor is released from prison, the mother shoots him in the head, the bullet passing through the man’s brain and into his wife’s chest.

That particular subplot ends right there, with no follow up as to whether the wife survived, what charges were pressed against the mother, nothing. Not even a pointless commentary about how if the real killer had just been found sooner, the janitor would be alive. Early in Lady in White, I was convinced events were unfolding in a manner to present the collision of invented childhood evil, like Dracula masks and ghost stories, with real, persistent, societal evils, but no such link is made. The racism and the serial murders were only there for background flavor, and there is something uncomfortable about a film that can so blithely use the rape and murder of little girls and racially-motivated murders to create empty nostalgic fantasy. 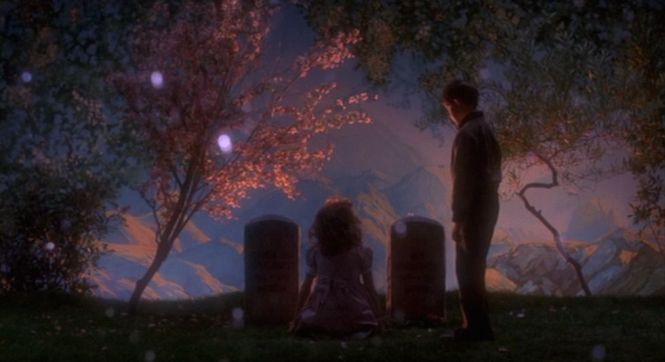 That’s not to say there aren’t other, lesser loose ends in this film. Frankie’s teacher, played by character great Lucy Lee Flippin, clearly has a crush on his widowed father, but as soon as she reveals this, she’s neither seen nor mentioned again. A surprisingly touching scene about Frankie’s dad and the orphaned friend he grew up with ends and is never referenced again.

So where does the titular Lady in White fit in all this? The serial murderer killed the little girl Melissa by throwing her off a cliff many years earlier. Melissa’s mother died while searching for her daughter, and legend has it that she haunts the cliffs still looking for her little girl. After the twin tragedies of Melissa and her mother dying, her mother’s sister had tried to kill herself out of grief, but she was rescued and sent to a sanitarium. When she was released, she returned to her dilapidated old home near the haunted cliffs, and it’s this very real woman — Melissa’s aunt — haunting the ruins of her own home that people see and interpret to be the ghost. 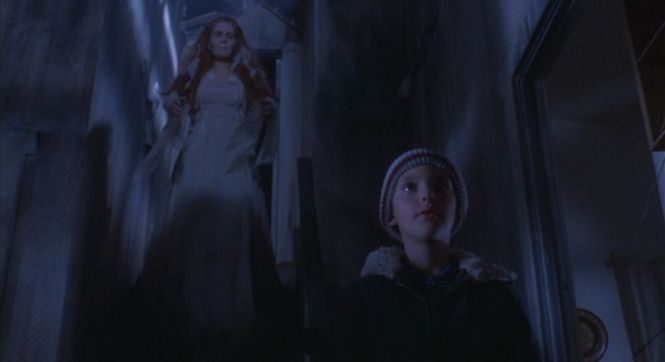 Yet Melissa and her mother are genuine ghosts that Frankie can see, and he’s tasked with reuniting them so their spirits can rest. He also discovers who the serial murderer is. Frankie is chased to the cliffs and the aunt’s home by the murderer, but when she tries to rescue him, the murderer kills Melissa’s aunt and almost kills Frankie before he is rescued. 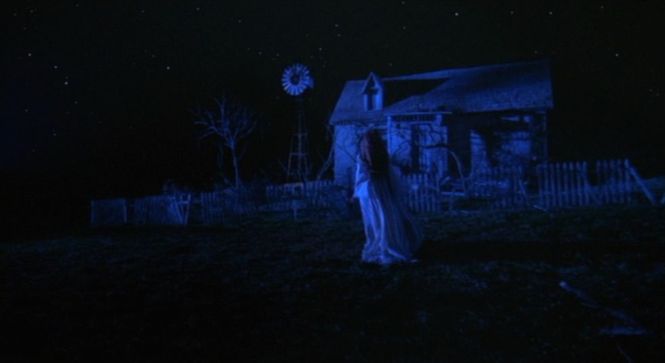 That he will be rescued is not in question, but the usual trope in this genre of a young child burdened with adult responsibilities seems unduly heavy here. Frankie must solve the problems of both the corporeal and spiritual worlds, the kind of stuff fantasy heroes are tasked to do. It’s this recurring inappropriate escalation of drama that relegates LiW to the ranks of the merely good, never great.

Pursuing the Lady in White and Durand-Eastman Park: Locations and legends behind LiW at The Cabinet.

Basement of Ghoulish Decadence on The Lady in White.

The Lady in White at Obscure Hollow: Check out the last one with the old photo of the Lady in White before she died. It’s actress Karen Powell I believe, who in that photo looks a lot like Alice Faye.