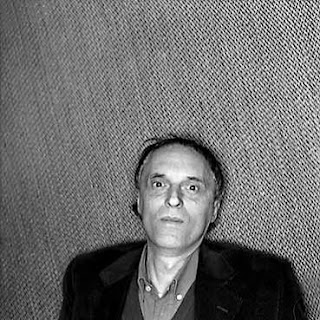 Italian director Dario Argento is known for his giallo films featuring excessive style, bloodshed and sex. His surrealist and controversial horror thrillers of the 1970s are often cited as some of the most influential films by modern horror filmmakers. In the mid-2000s, Argento directed two episodes of the Showtime “Masters of Horror” series. While not strictly Italian horror, the influence and signature style of Argento is unmistakeable.

Argento’s first short film for “Masters of Horror” was Jenifer, based on the graphic novel by Bernie Wrightson and Bruce Jones.

Police Detective Frank Spivey and his partner are on a boring stakeout. When Spivey accidentally stumbles across a man taking a cleaver to a woman he has dragged under a bridge, Spivey shoots the disheveled man and kills him. At first thought beautiful, when the woman’s blonde curls pull away from her face, Frank sees that she is quite disfigured. Spivey is immediately obsessed, unable to forget the woman he has just saved. 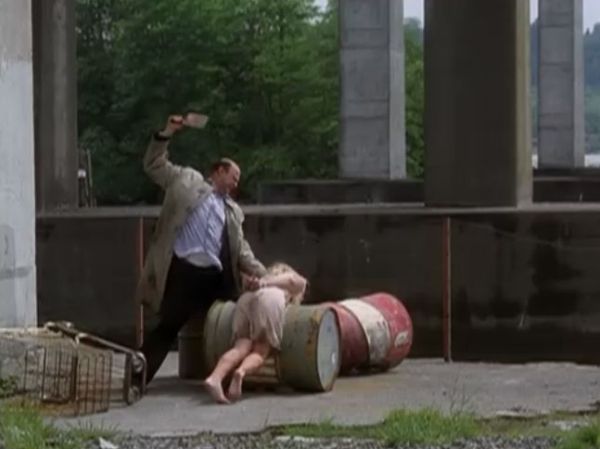 Spivey is put on administrative leave pending psychological counseling after killing the suspect. He returns home to a distant wife, irritating teenaged step son, and even a hostile cat who hisses at him every time he approaches. The next day he follows up on the girl. Her name is Jenifer, he is told, and she has no family, no information is in the system for her, and she is unable to speak. They assume she is mentally challenged and place her in a poorly-run state institution, from which Spivey rescues her again. The wife and stepson are not amused when he brings her home, although the stepson is not completely freaked out as he had a chance to see Jenifer’s impossibly beautiful naked body.

Frank has noticed Jenifer’s body as well, and after Jenifer is kicked out of the home for killing and devouring the family cat, Frank tries to find a place for her to stay. No one will take her, so he attempts to abandon her at the pier near where he found her. Pale, sweaty, shaky and sporting a thousand-mile stare, Frank barely attempts to resist Jenifer as she unzips and unbuttons his pants in short order. After some rousing car sex, Frank is back at home with Jenifer insisting she has to stay. 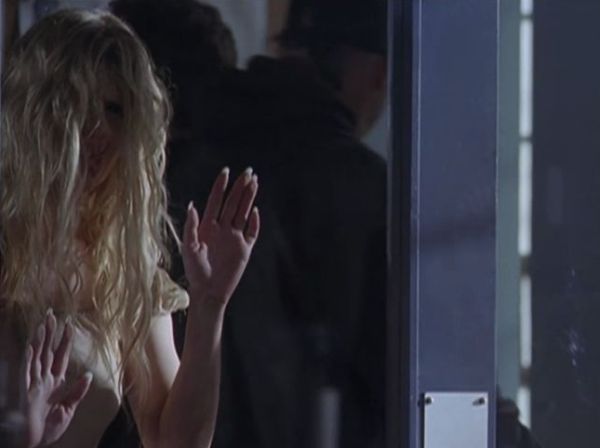 It’s all fun and games until Jenifer attempts to eat Frank’s wife’s face, at which point his wife and stepson leave for good. Things continue to deteriorate in a horrific manner until the inevitable denouement; the fun of this film is the ride, not the conclusion, as there is only one possible conclusion to be had.

Directed by Italian horror maestro Dario Argento, this film is a one-hour episode of the “Masters of Horror” series that aired on Showtime from 2005 to 2007. Sixty episodes were filmed but only 59 aired in the U.S., the first-season Takashi Miike film Imprint having been held back because of its extremely graphic violence. The other first-season film that had issues with its graphic nature was Jenifer, edited for Showtime and also in the DVD release. The removed scenes were sexual in nature as well as gory, and can apparently only be found as DVD extras.

In Jenifer, it is obvious the director is having fun, injecting psychological horror into the old “butterface” joke and relishing the results, particularly notable in his many lingering close-ups of Steven Weber’s wrenching “I am so fucked” face. A few allusions to horror classics such as Frankenstein and Freaks also add a lighthearted tone, while the audience meanwhile is properly horrified by Jenifer’s actions. Much of the film’s conflict comes from the discrepancy in perspective between the director and the audience, making for a rather odd feel to the film that nearly punctures the fourth wall.

What is notably missing in this film is Argento’s signature extravagant lighting and cinematography, replaced instead with competent but mostly mundane television camera work that would not be out of place in an episode of “Law & Order.” Visuals are often lifted directly from the classic comic this story is based on, I presume in an attempt to stay true to the source material. The source comic, by the way, is fantastic, a tight and disturbing little number by Bruce Jones and Bernie Wrightson, originally published in Creepy #63 in July of 1974.

One of the most interesting facets to this film is how the major crimes go unnoticed, how people caught up in Jenifer’s destruction remain so stubbornly silent. People disappear and are attacked, yet no one seems to notice enough to call authorities. The man early in the film who tries to kill Jenifer turns out to have recently had a good job and a normal life, but his family now refuses to even claim his body. It’s this silence that allows the horror to continue, and it’s a fascinating addition to the story.

On the surface, the original “Jenifer” does not seem to be the kind of source material that Argento would be attracted to. With the male lead adapted to a police detective who ultimately finds himself covering up heinous crimes and living on the lam, it becomes almost a giallo film, but never reaches that designation, not for want of trying on the sex and blood fronts, but due mostly to its uninspired visuals. Adding a giallo feel to the story is moderately interesting, but mostly unnecessary. 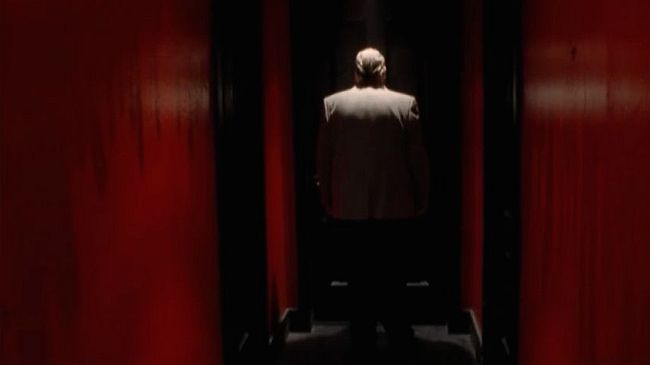 For the second season of “Masters of Horror,” Argento filmed a much more stylish, intense, and bloody thriller entitled Pelts. Meat Loaf Aday stars as furrier Jake Feldman, a very angry, desperate, egotistical man who feels he can take anything he wants. Jake is obsessed with Shanna (Ellen Ewusie), a beautiful lesbian stripper whom he attacks and tries to rape after paying for a lap dance. She fights him off and he leaves with a warning that he will return with the kind of money and power that she will be unable to resist.

Meanwhile, a local trapper (John Saxon) and his son go out to check raccoon traps they have set on Mother Mayter’s property — without permission, of course. In the dead of night, they wander into the fenced-off area and are confronted with the sight of dozens of raccoons, every trap filled. The traps are set amongst what appear to be ancient ruins that neither the trapper nor his son realize depict raccoons. The animals are fighters, one even chewing its own foot off to escape, but they are of course no match for the violent greed of the trapper who bashes their heads in with a bat. They take about a dozen dead raccoons back to their home and skin them, only to find the pelts are a beautiful silvery fur, hypnotizing and ethereal, and all identical. 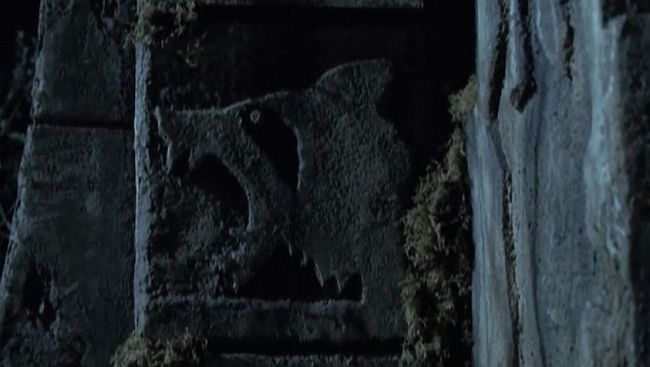 The beauty of the fur possesses the son, who is compelled by forces unknown to bash his father’s head in with a baseball bat, then to put his own head into a raccoon trap.

Jake and his partner find the pelts and the bodies the next morning, recognize the value of the gorgeous, ethereal fur, and hardly hesitate before stealing the pelts first, and then calling the police. Jake’s plan is to make a unique coat out of the fur and enter it into an international exhibition with Shanna as the model. As his undocumented and abused workers begin to assemble the coat, Jake makes his way to Mother Mayter’s, hoping to get her to agree to let him trap on the land.

What she tells him shocks him, but not enough to quell his greed. It’s too late to save Jake. His workers and partners are slowly killing themselves off in gruesome ways, but he myopically sticks to the plan to achieve both success in the industry and possess Shanna as his own. Things, as they say, do not end well. 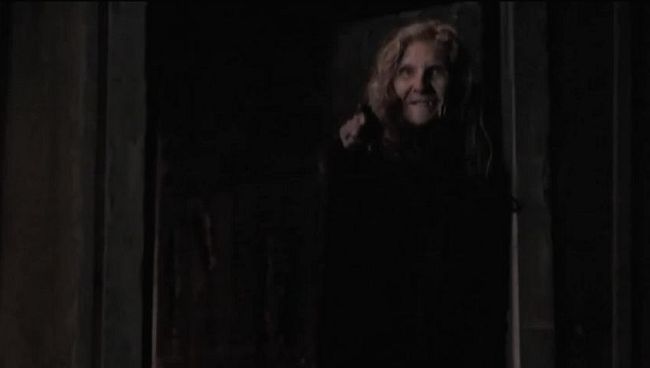 Argento’s direction and Attila Szalay’s lush cinematography are unqualified successes in this film. Heavily saturated colors and impossible shadows abound. Gorgeous, languid nature shots punctuate quietly unnerving interiors that mimic cages, traps, and abattoirs. The violence is intensely graphic, making Pelts one of the few films that has made me physically ill.

The ultimate lesson of Pelts is not a unique one, as it speaks to the perils of succumbing to greed, abuse of nature, and the underlying philosophical idea that humans are merely animals, “beasts with big brains” as Agent Mulder might say. Again, as with so many of Argento’s works, the fun is in the drive and not the destination. Outstanding performances from Aday, Saxon, and especially Ellen Ewusie elevate this short film from mere television shock thriller to a very compelling piece.