“One of these days I’m going to write a song that makes someone want to cry.”
— Neil Diamond, Teen Screen Magazine, March 1967

Roughly one week later, sober and trusting that every package delivered to the house contained either happiness or fun or, on really good days, both, I opened the box to find Neil Diamond staring at me. 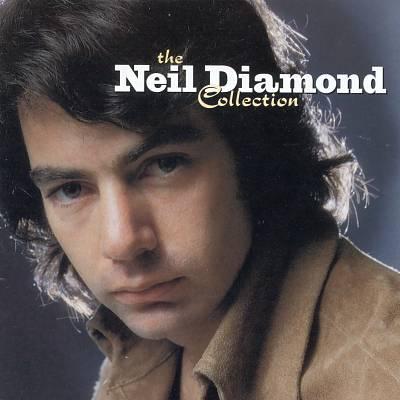 That photo bothered me, induced an unidentifiable, inexplicable, but very real disturbance. A few days later my husband, who knew I was in the throes of some weird ennui-induced thing improbably triggered by a greatest hits album, kindly turned the album cover around. Now it was a slightly older photo from Diamond’s Greek Theater engagement in 1972. Young, lithe, gorgeous, confident, godlike hair and sad eyes. 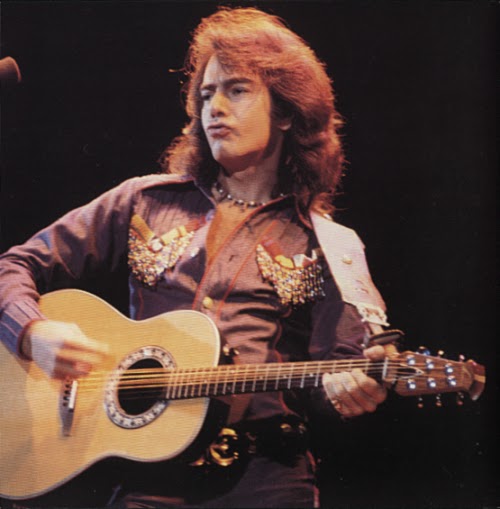 When I saw these photos, I realized I was not familiar with the Neil Diamond that existed before the beaded blouses and glamour shots album covers. At the same time, I was overwhelmed with the realization that 40 years had passed since I was born and since that greatest hits album photo was taken and holy shit that has been a long time. Time will not stop, loss is inevitable, and what was will never be again.

These are basic concepts, things I figured out decades ago; why was I suddenly having so much trouble accepting them now?

Re-acceptance was not easily had, and after several very shaky days I was nearly unglued. The unidentifiable ennui-induced thing had turned into an unwavering sense of loss and grief. It was an unstable situation, tragicomic in retrospect but mostly frightening at the time. In an effort to ferret out what was happening and with an ill-defined feeling of having forgotten something important, I searched out early Neil Diamond performances and interviews.

It was in that state that I stumbled across a 1971 BBC “Top of the Pops” performance by Neil Diamond.

Please, if you have a spare 38-odd minutes of time, watch this. I don’t ask this because I wish gut-wrenching emotional turmoil on you, because I acknowledge that I am odd and different and what happened to me will not likely happen to you. Normal people do not suffer irrational headspins after watching a 40-year-old “Top of the Pops” episode. But I think you will be surprised, maybe even a bit moved, by Diamond’s performance. Within one minute of the show opening he is expressing pure, unadulterated joy at performing with the string section. He’s confident and happy and very much in control of his art. Even when his untrained fingers get tangled in an arpeggio or the lead trumpet cracks on an important high note, he’s completely together. As much as he wants to hide those gangly arms behind his guitar, as hard as it is for him to force his eyes open and face the crowd or finish a particularly raw lyric, he does it.

Neil Diamond has said songwriting is the hardest part of his work, performing the easiest, but I am not convinced that live performance has ever been easy for him. There are numerous early television appearances where Diamond is obviously uncomfortable. Watch his eyes on this 1970 “Glen Campbell Goodtime Hour” clip at about 4:25 where he momentarily freaks out after glancing directly at the camera. When he’s not waylaid by nerves, it’s emotion. In the 1971 BBC appearance, he visibly cringes at the end of “I Am…I Said” and very nearly goes silent without finishing the song. Manufactured or genuine, that’s pain writ large upon his face. He’s offering up his soul, and when an artist does this, they ask for your soul in return. At least some of it, at least for a while.

People will forever argue about when Neil changed, but there is no denying that there was a change, a walling-off of emotion coupled with a growing propensity to shake his moneymaker on stage.  Sometime in 1976, after the Thank You Australia Tour in March yet before The Band’s “Last Waltz” concert on Thanksgiving, Neil went from offering his soul to merely displaying it like a museum piece. Yet while he relied on little more than past glories and sex appeal, he continued to expect fans to keep up their half of the artistic soul exchange. The sublime had turned to kitsch, embraced mediocrity to save itself, abandoned its art for the soul-numbing safety of its 17th greatest hits compilation, this time with a bonus demo reel and tiny pictures in the liner notes.

I combed through any interviews, TV appearances, or concert footage I could find from the mid-70s and beyond just for one small sign of the Neil Diamond that used to be. There are tiny little winks of light scattered amongst the decades of debris, but that is all.

It felt more like a betrayal than a revelation, and at random moments over the course of a few days, bits of Diamond’s BBC performance would pop into my head. It was never a welcome memory, instead making me feel as though I just been given some very bad news. More than once I risked giving way to a debilitating scream, a powerful noise that would alter time, change reality, correct the past, destroy evil, win bets and fell a nearby shepherd and his flock.

So I went back to that BBC concert footage to face it, straightened myself up, shoulders back, steeled myself and stood in front of that 1971 Neil Diamond and looked him right in those soft fucking eyes. I was Randolph Fucking Scott and I was not going to run, and man, if you are going to kill me, then you are going to have to do it now.

I did not die, of course. Broken hearts don’t kill.

I’m fond of saying that art which affects me to the point of shredding my emotions has ruined my life, and I’m fond of saying it because it’s the goddamned truth. When this happens, my emotions, philosophy, and spirituality are demolished, the pieces scattered, never put back together the same way again. Sometimes it’s wonderful and exciting, like watching Milton Glaser in To Inform and Delight, or listening to Laurie Anderson narrate Andy Warhol: A Documentary Film, or hearing Pink Floyd’s “Brain Damage/Eclipse” or that Handel sarabande in D minor I love so much. Sometimes, though, it really fucking hurts. The Bad Sleep Well hurt, as did Brave New World and The Sound and the Fury. Rick Danko’s “It Makes No Difference” in The Last Waltz destroys me every time, and I’m certain my sworn lifelong nemesis Elton John wants to kill me dead with the 1977 live “I Feel Like a Bullet (In the Gun of Robert Ford)” — even though he and Ray Cooper fuck up about two minutes in. Especially because they fuck up. Goddammit, Elton. I will get my revenge, you be-sequined bastard.

Once this whole Neil-induced pseudo-breakdown simmered down, there were a lot of things I had to acknowledge. I may imagine myself as a gunslinger facing down evil, beating the bad guys to the draw and saving my own life — soul, really — but that’s not true. At best it’s metaphorically true; all my conflicts are artistic and all the duels one-sided and internal.

Last year I briefly touched on The Bad Sleep Well and how it ruined me. I hesitated for months before posting that entry because I was scared, and frankly I’ve been scared and a little bit lazy my whole life, at least when it comes to writing. And I’ve never honestly examined these Stendahl-like reactions that bite my neck and get tangled in my hair every six months or so. Is it appropriate when I say The Bad Sleep Well killed any lingering hope for humanity I had left? Is it merely drama queening? Is it even real?

Yeah, it’s real. It’s real for me, at least. Maybe it shouldn’t be. Maybe I shouldn’t get so caught up in fictional corruption or Quentin Compson or a “Top of the Pops” performance. But I do get caught up in it, and I’m tired of pretending as though I don’t and avoiding the subject in my writing.

I want to write and I want to be good at it. Writing is not easy for me. When I started this blog, I thought it would afford me practice and experience that would turn me into someone who could produce quality work on a regular basis. Four years on, it was obvious I had not become that magical creature.  As banal as it sounds, all that time spent digging through Neil Diamond interviews inspired me when I didn’t realize I even needed inspiration. He has said that “I Am…I Said” took four months to write, that he’s not an inherently good songwriter and he has to work hard at it. I knew I wasn’t working hard enough at my own writing, digging deep enough, or even doing enough research. Again, it’s banal, but I decided if Neil Diamond can change himself from that goofy scared kid on the “Glen Campbell Goodtime Hour” into the modern day troubadour on the BBC a year later, then maybe I can transform into a decent writer, someone who is respected amongst my peers.

Of course, Neil kept transitioning and didn’t stop, flying in spectacular fashion through a series of phases: Larger-than-life panty-dodging sex god, attention-starved bead-covered sell-out, and finally respected and loved showman who gets to smack the shit out of Jimmy Kimmel. That’s his thing, and though right now I am disappointed in him, I am also sane enough to know that it’s not my place to judge.  Still, I plan on taking his career path as a cautionary tale, although I don’t imagine I’ll ever get to the point where I need people to throw their knickers at me to prove that I’m worthwhile.  Panty throwing is always optional. (It’s not optional.)

After spending about an hour laying in the hallway, staring at the ceiling and tightly hugging Dark Side of the Moon because I failed to get a firm hold on this post — it took me weeks to manage the final sentence — I wonder how hard this is going to be. It’s easy for me to say I should work at writing. It’s not going to be easy for me to actually do it, but I have to, and that means less posts on the blog.  I will still post here because the only thing I’m moderately good at writing is film and cultural criticism, but it will mean less overall posts and hopefully less of the half-formed almost-critiques that I’ve been just barely getting away with. And when I’m not struggling over some epic screed on how Ginger Rogers’ ostrich feather dress represents fascism and the decline of the bourgeoisie, I will still be posting important Regis Toomey updates via The Phantom Creeps recaps, photos, schedules, my Projects and screencaps, because those things are fun.

And now the final sentence that took me so long to write: Wish me luck.