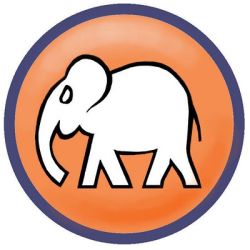 It’s April Fool’s Day, kids, and you know what that means: The White Elephant Blogathon! I missed last year, but my 2009 entry was the infamous “3 Ninjas: High Noon at Mega Mountain,” a post which still receives a concerning number of hits to this day. What are they looking for?

The White Elephant is hosted by the gracious Paul of Silly Hats Only, where a list of all the fine submissions this year can be found here. I know it’s Friday evening, but if you get a chance, check out the other entries. They were all excellent.

The rules of the ‘thon are simple: Everyone submits one (allegedly) bad movie, and bloggers are randomly assigned one of these films to review. Earlier today I only hinted at the movie I submitted, but now that it’s evening I’ll tell you: “Big Trouble”, John Cassavetes’ final film, which was reviewed at The United Provinces of Ivanlandia — NSFW for breasts unrelated to the film “Big Trouble.”

Meanwhile, I was assigned “Deadlier Than the Male” (1967), a film that I quite honestly would have watched without being dared to, so my first reaction on being assigned this film was “Yay!” Turns out, I yay’ed too soon…

Ah, the ’60s spy flick. Full of camp, cleavage and corny one-liners, this genre began as near spoof and evolved so quickly into full-on pastiche that no one really noticed. The spy genre had been around for decades prior, of course, primarily as an ingredient of war films, but also often featured in some of Hitch’s best movies. In the early 1960s, two unapologetically campy films changed the way we thought about spies: “The Manchurian Candidate” and “Dr. No.”

One main ingredient in the spy film is the sidekick. Capable, loyal and dependable, every well-dressed hero and villain have at least one for formal occasions. James Bond movies created the templates by which all typical sidekicks were formed: The male assistant/friend, often sacrificed to make the protagonist’s mission more personal; the person from another country, often Asian, with the exotic specialty; and the buxom female in skimpy outfits.

Speaking of the ladies, haven’t you ever watched a spy film and wanted to know what those sleek, organized women in the background were doing, rather than listening to some middle aged white guy bloviate on and on about how he’s stolen all the Prussian Blue in the world, thus forcing artists to buy only his oil paints at extortionate prices? For those of us who always wanted to know, “Deadlier Than the Male” delivers, or at least tries to.

Women in the spy genre of the 1960s and early 1970s tended to be the bosom-baring sidekick-slash-lover type, used sparingly and more as window dressing than actual characters. Sometimes a fully functional female spy appeared within the genre, often as a novelty, yet while a few characters transcended the restrictions of the genre, they never transcended the form-fitting restriction of their wardrobes.

With the female sidekicks, there is often a very fine line between sexy ornamental assistant and sexy spy woman who can make it on her own. Pussy Galore, for example, is technically Auric Goldfinger’s partner in crime, capable, strong, and independent… until taken down by James “I’m forcing myself on you because you know you want it, baby” Bond and turned into an almost-forgotten background character. The capably campy Emma Peel and her predecessor Catherine Gale of “The Avengers” are arguably the most well-known examples of sexy spy women who could make it on their own, yet they are always paired with a male partner, a superior in the organization.

Notably missing in campy 1960s spy flicks is a more detailed, focused portrayal of the female spy. “Deadlier Than the Male” attempts to show us the life of the women working for a crazed male megalomaniac, while making the leader of the organization almost secondary. The result is fascinating, until attention is shifted away from the women who do all the work and we’re forced to watch the boring rich psychopath wandering around his lair in a smoking jacket.

This film is not a total loss; there are a few fabulously appointed bachelor pads to stare at.

And it’s true, the first half of the film is wonderful. “Deadlier Than the Male” is an unabashed James Bond rip-off, which is rather ironic considering that the Bond character undoubtedly owes some of its origin to Bulldog Drummond. In DTtM, Richard Johnson plays Hugh “Bulldog” Drummond, yet the nickname “Bulldog” is never used, and he has been changed from private detective to insurance investigator. An insurance investigator who knows several styles of martial arts, many languages, and how to diffuse bombs, but an insurance investigator nonetheless. The title of the film is a reference to Kipling’s famous poem “The Female of the Species”, also used as the title of one of Herman “Sapper” McNeile’s Bulldog Drummond books in 1928. Yet the plot of the film is not based on the book, and very little publicity mentioned that the male lead in this film was supposed to be Bulldog Drummond.

Irma Eckman (Elke Sommer) is a stylish stewardess aboard a fabulous jet liner owned by Keller, zillionaire oil magnate. Immediately we see her plotting and, after she kills Keller and plants a bomb on board, she parachutes out to the waiting safety of her partner Penelope (Sylva Koscina). Soon, they don revealing bikinis and come out of the sea with harpoons — sound familiar? — to assassinate the only guy who knows what they have done. Unfortunately for them, that man was Drummond’s friend, and Drummond is asked by another oil company to investigate the deaths.

Soon, the plot is revealed: Irma works for an unknown individual who promised to stop Keller from delaying a profitable business deal, but at the cost of £1 million. After she kills Keller, she reports to the oil company to claim the £1 million, but one board member balks at paying. She quickly dispatches him as well, the rest of the board takes the hint, and she walks away with the money. Meanwhile, Hugh Drummond pieces together a few clues while his young American nephew hangs around and acts like a complete and utter knob. To his credit, Drummond is willing to shell out hundreds of pounds to send the little knob off to sail with friends, but it turns out these friends include his friend from an Ivy League university, King Fedra of some unspecified oil-rich country. The king is next in line to be assassinated, so Drummond tags along.

Tangent time! I’m a computer nerd from way back, so when the opening credits promised an “electronic computer” — the GE 115 — I was pretty damn excited.

When I first watched the film, though, the only computer mentioned was one used to control the enormous chess pieces, and that was obviously a fictitious computer. “They cheat and they lie!” I cried, until I recalled a fleeting glimpse of Peterson’s high tech control room, where I found the elusive GE 115:

It’s on the far left in the very back, enormous and stylish, but hardly noticeable. Apologies for the fuzzy screen capture; the film is grainy and very soft, causing screencaps taken during camera movement to look… well, to look like that. But if you’re interested in computers from 1967, there’s a fun page with photos of the GE 115 and the 120 along with a little info here.

This little diversion into the heady world of 1960s computing is not only fun, it illustrates nicely my problem with the latter half of the film: Once the secret head of the organization is revealed, the behind-the-scenes workings of the evil empire are so quickly glossed over that there’s no time to enjoy them. Not only that, the women who do all the work are shown from a distance, no more than props, with Peterson narrating as though the women were tchotchkes on a shelf. This is not a case of merely illustrating Peterson’s sociopathic tendencies, sadly, because the film itself changes focus and attitude, resulting in an uneven story.

In fact, at right about the 45-minute mark, the story becomes so implausible, unfocused and dull that it’s difficult to maintain interest. It’s at this point that Penelope kidnaps and tortures Drummond’s unbelievably irritating nephew, as though anyone in the audience cared about this twit. Well, that’s not entirely true, because I cared — I cared enough to cross my fingers and hope the little bastard would get blown into a hundred million fluorescent chunks flying brilliantly across the sunlit sky. But then his uncle arrived and saved him in the most eye-rolling way possible, and the film slid straight to hell, all joy and life sucked away, the resulting vacuum filled with lifeless drudgery and really bad wigs…

…brightened only by the occasional penis metaphor.

If you’ll pardon a second brief intrusion, I can’t help but note that the theme song to DTtM is a Walker Brothers single from their album “Portrait”, and which features lyrics that are so unsubtle that they might just as well have been replaced with a loop of “bros before hos” repeated indefinitely. That should have been a hint that not all was well in the land of strong and sexy female killers.

So you know how Peterson behaved as though people were things for him to play with at whim? Well, apparently showing us this wasn’t enough, we had to see him reveal in dramatic and exciting fashion an enormous chess set of slightly larger-than-life pieces that he can move around at whim!

On the one hand, it’s a big, cheesy, shiny, campy chess set where pieces were allegedly moved by voice-activated computer, yet obviously just rolled about on dollies, and that’s fantastic. On the other hand, we get it already, you’re a psychopath. Stop hitting us over the head with these metaphors, movie, we aren’t wearing helmets.

That pretty much sums up the entire film. Half of it was enjoyable, wacky fun from the viewpoint of the sexy killer sidekicks. The other half was dull and desperate, switching abruptly from giving the female characters autonomy and power to making them ridiculous and stupid. While I cannot condemn, I cannot fully recommend, either.