Take a good look at this poster. 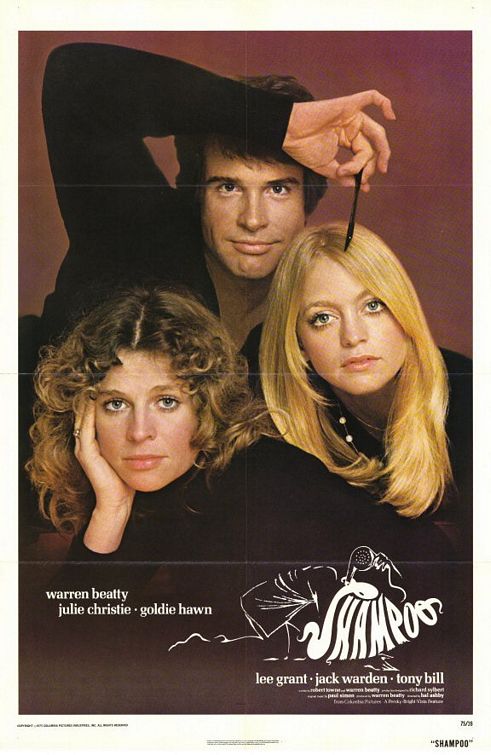 Nice poster, innit? Evocative, stylish, everyone looks lovely. There is just one problem: The hairstyles in the poster for Shampoo (1975) do not match what the actors sport in the film, not on any level.

The only way I can cope with the earth-shattering failure of the hairstyles in Shampoo is to pretend as though they were a deliberate part of the satire. It’s not that the hair is always bad, oh no. Goldie’s hair is terrific as always, not the straight 60s look in the poster but a slight modification of her classic bouncy 70s look. It’s a bit anachronistic, but nothing horrifying. Lee Grant’s hair is the same style she’s rocked since 1962, slightly fluffier. I do not quibble with their hairstyles, as both Grant and Hawn have signature styles with little deviation. 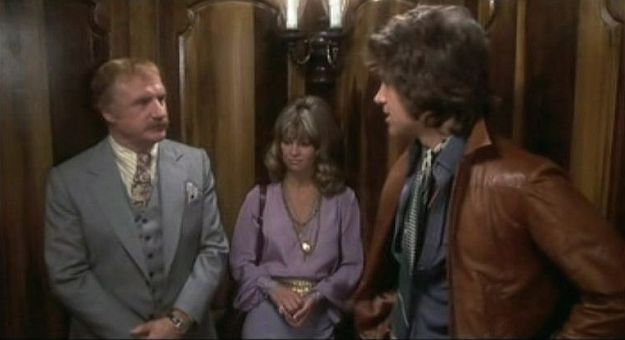 But. BUT. Jack Warden is in an embarrassing red toupee, this weird little wiry thing just sitting on top of his head. Carrie Fisher is in a long reddish wig that’s so obvious, scarves were required to make it look semi-presentable. And Beatty… oh, dear. Beatty’s hair is almost indescribable. It looks like a remnant of shag carpeting escaped from a split-level home and hijacked Warren’s head, then forced him to drive 65 MPH in a convertible with the top down.

Julie Christie is put in a series of increasingly unbelievable wigs until she finally ends up here: 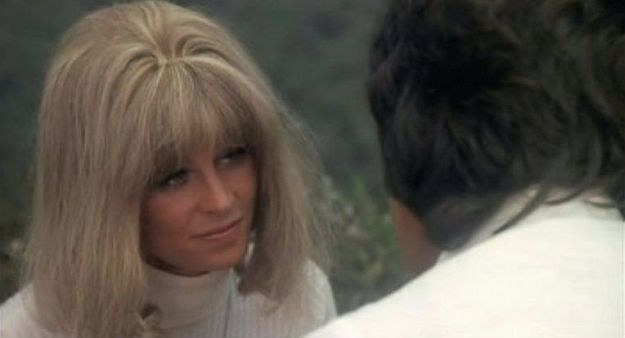 It’s equivocal whether Warren is simply too old for the part of George, the trendy, sexy hairstylist with dreams of celebrity, or if George is supposed to be a pathetic almost-40 who tries to act 25. Everyone involved in the story is vapid and self-centered and pathetic. They are all hypocrites, cheating on their partners while becoming violently angry when their partners cheat on them.

George, though, takes the hypocrisy to a new level. At the beginning of the film, he asks for a bank loan to open his own salon. The banker explains interest rates and other details of the loan that George doesn’t understand and, frankly, doesn’t care to. But when he starts ineptly blathering about his dream of owning a salon, the banker doesn’t understand him. And who would? George hasn’t said anything of substance. George becomes self-righteous and goes off on the banker for not understanding his business. He throws a tantrum better suited for a preteen than a man nearing 40. 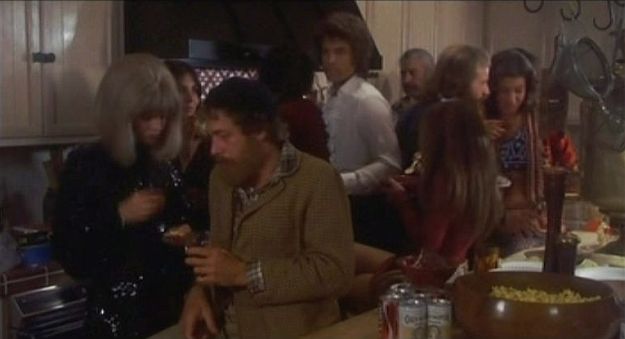 Howard Hesseman in a role that was almost completely cut from the film. The day before I saw Shampoo I watched Petulia (1968) where he was in a very similar background hippie role. Coincidentally, he had lines in Petulia but did not get credited, while he was all but cut out of Shampoo and yet gets a character name and a decent credit.

Later it becomes clear that George has no real work ethic. He’s constantly late, leaving in the middle of styling a customer, acting inappropriately, and so self-absorbed that he doesn’t even pretend to care about co-workers’ serious problems. If the haircut he gives Jackie is any indication, he’s not even good at styling. Her hair goes from long bouffant to mid-length bouffant cut at an angle — not a huge change — and it’s almost identical to the style he gives Felicia.

Finally, George fully admits that he only went into beauty school to get laid, and that’s the only reason he has continued with this career. He tries to explain himself, confessing that he knows he should have gone further with his life by now but he doesn’t care, because sex is all he wants, and he’s not going to apologize for that. 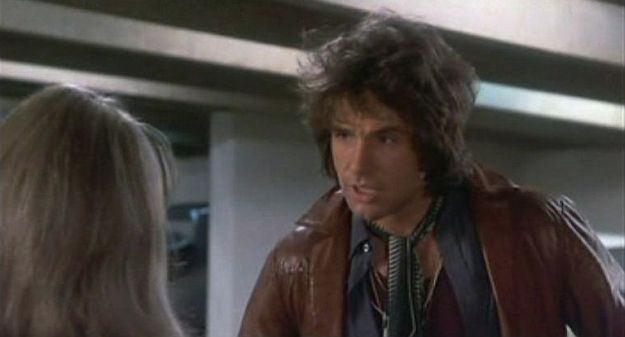 Some reviewers at the time felt that George’s confessions in the film detracted from the film and were a cheap attempt to garner pity for the lead character, but I think that misses the bigger point. The other characters have moments of genuine introspection and insight, but George can manage nothing more than a childish manipulation tactic, one no deeper than when he called the banker an asshole and threw around a trash can at the beginning of the film.

Shampoo is generally regarded as a sort of time capsule, one that invokes both the year it was made as well as the year it portrays. Unfortunately, the film itself is almost as vapid as its characters, and it reduces the enormous cultural and political changes of those few years into mere curiosities. It’s difficult enough to care about characters who are so oblivious to lives outside their own humorously-coifed heads; it’s next to impossible to care about a film that does the same. It’s unfortunate that the same observance of detail utilized to physically invoke the world of spoiled white Californians of a certain class wasn’t utilized to invoke their hypocrisy and self-imposed seclusion. By asking us to care about the love affairs, haircuts, and insecurities of these characters, the film asks us to validate their lives, which undermines any substantial message the film may have been trying to make.

Read More or Else:
Senses of Cinema on “Shampoo”
“Iconic Film Styles: Shampoo” at House of Mirth and Movies