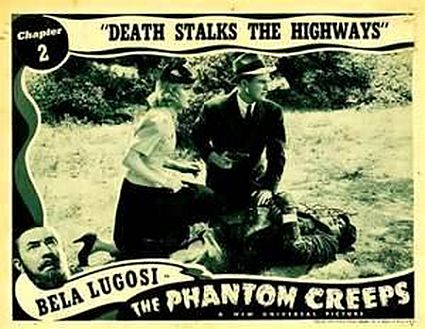 For the next few days, we are revisiting the episodes of The Phantom Creeps that were previously posted on the old She Blogged By Night, before we go thrilling to the final solution I mean conclusion. Sorry, I think Plucky Girl Reporter’s sleepy-eyed antisocialism is starting to wear off on me. The post is the same as what appeared on the old SBBN, though I have added a new picture to the left. It’s very exciting. So now, please enjoy Episode #2 of The Phantom Creeps: 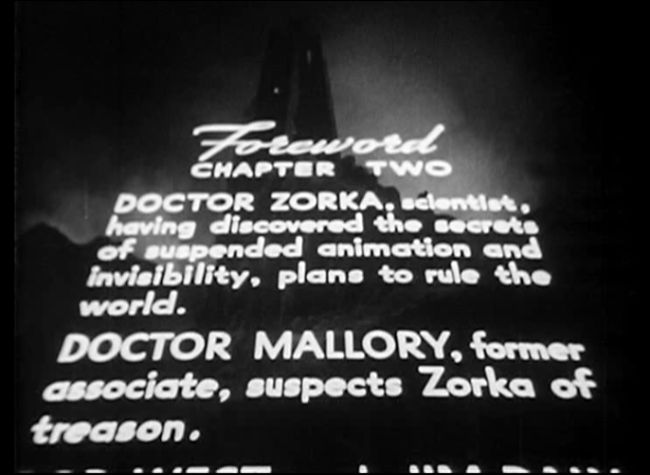 Welcome to another edition of The Phantom Creeps (1939). Each episode is approximately 21 minutes long, with at least three minutes of credits, fancy schmancy scrolling summary, and repeat of the finale of the previous chapter. If you’ll remember, we just saw a spider bomb — which I have dubbed the Little Gem ArachnoBlam Mechanism ™ — go off near G-Man and ace pilot Jim Daly (Regis Toomey), causing the plane to crash! 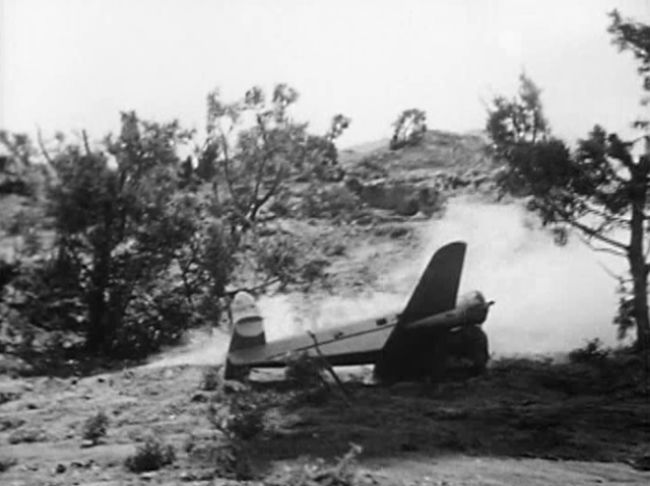 Hey, wait a minute. That doesn’t look the same at all! I think this serial exaggerated the seriousness of the impact in the last episode. Why… why, that’s cheating!

Also, I question how a fragile plane like that can survive intact after a three-minute head-first plunge ending only after impacting into the hard baked soil of the California desert, but I’m not a scientist. I cannot possibly understand the complicated physics that explain such rare phenomena.

Captain Bob doesn’t get even a bruise in the crash, but Mrs. Zorka and Jim Daly are both unconscious. Meanwhile, our fair haired reporter gently crashes into a tree as Dr. Zorka and his sidekick Monk drive toward the site of the airplane crash. 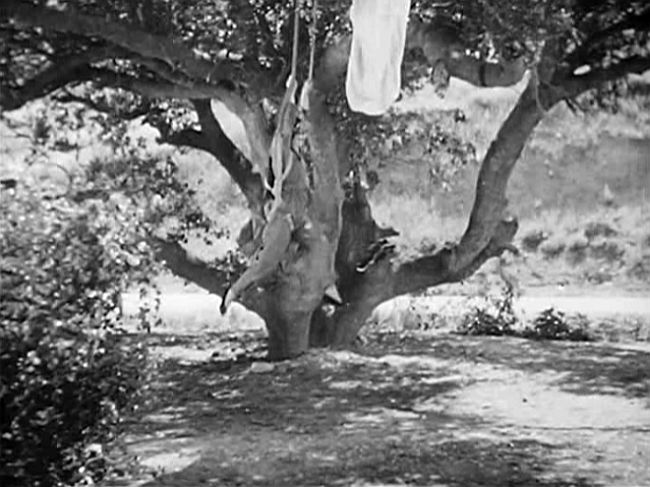 Zorka is in disguise as kindly Dr. Zane, remember, so he acts like he’s a helpful doctor instead of a mentally deranged psychopath. He, Monk, and PGR drive to the crash site, where a bunch of fedoras with men attached panic around an unconscious Jim Daly. 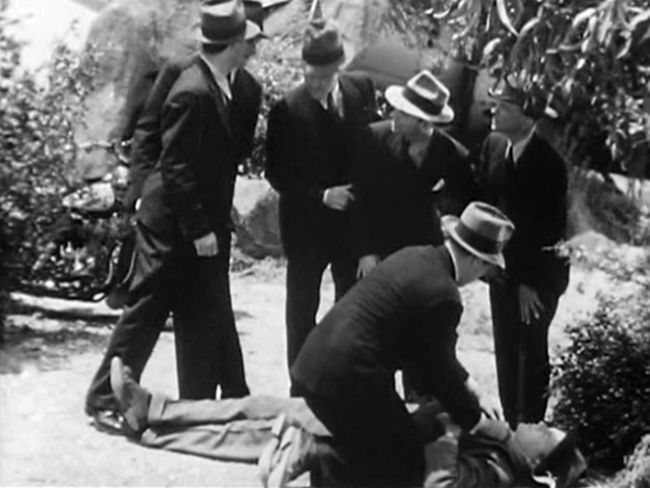 Look at Toomey, just chillin’ with his legs crossed. Probably taking a nap, the lazy bastard.

Zorka examines the victims and finds his wife is dead. He’s pretty pissed off despite the fact that this is all his fault for deploying the Little Gem ArachnoBlam Mechanism ™ in the first place, but reality doesn’t mean much to Zorka, so he begins to plot revenge.

When they take Jim Daly to the doctor, it’s discovered he’s not so much in a coma but in suspended animation, which is an effect of the ArachnoBlam that we were not aware of until now. All it did before was wilt a plant, now it semi-zombifies people, which makes a ton of sense once you accept that this serial was written as it was being filmed. 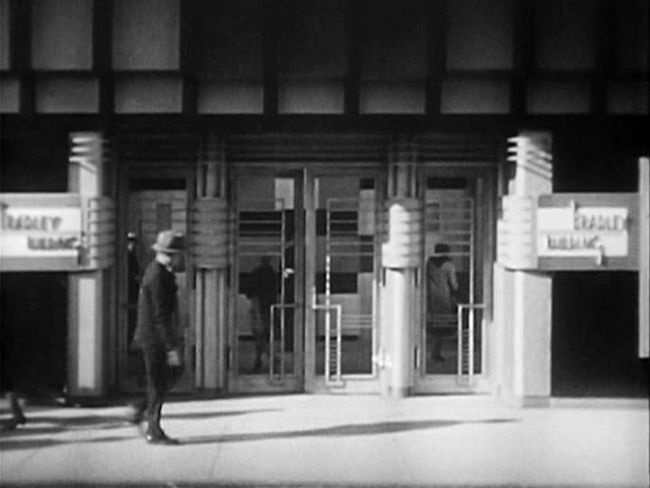 And now a word from our sponsor: Fabulous Art Deco Buildings. This is the Bradley Building (unless the signs are liars) and it looks to me like an actual structure, not a set, but I can find nothing about it.

In this gorgeous art deco building is a business called the International Language School, a front for an international spy ring. They believe Zorka to be dead and they want his technology, because there are hundreds of household uses for the ArachnoBlam and the invisiblator. You can tell these spies are super professional because they put on fake moustaches before doing their spy business. 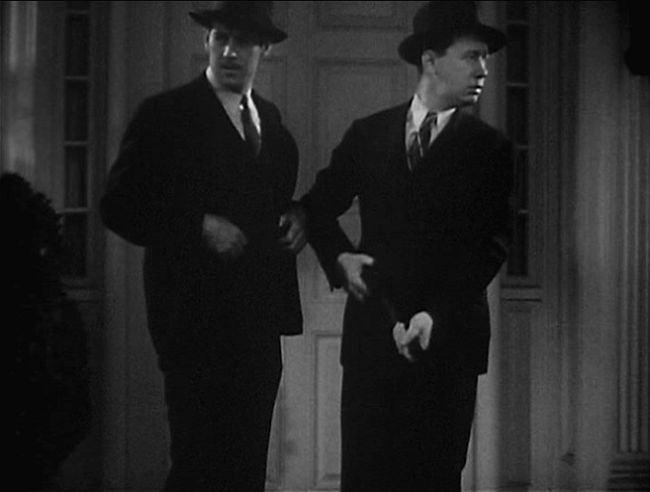 There’s nothing more frightening than the sight of Eddie Acuff holding a loaded rifle.

Zorka and Monk head back to their manse to get the remaining ArachnoBlams, but the law and the spies are both lurking about, preventing them from getting inside. Now, before you ask, yes they already moved out of the laboratory in the house and into the secret underground lab, but they left the ArachnoBlams upstairs for some reason, I don’t know why, please don’t ask me. 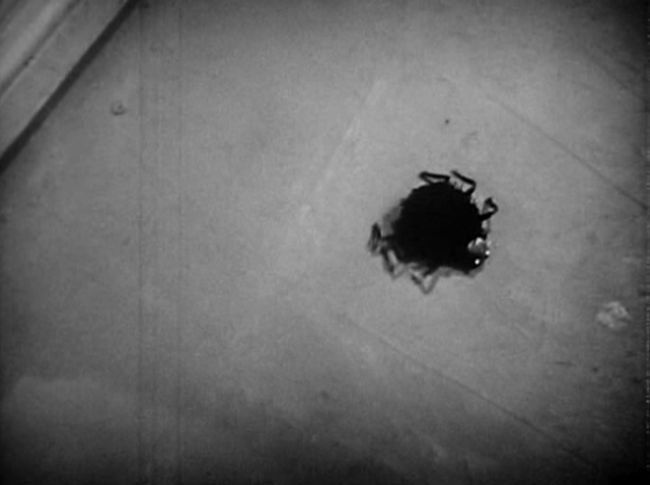 Observe the adorable ArachnoBlam in its native habitat.

They manage to sneak in and grab a bunch of the stuff they left behind before. Meanwhile reporter lady sneaks in, too. With a dozen G-Men and international spies hanging around, you’d think it might be difficult to get in through the front door. But you’d think wrong. PGR finds the disk left over in the plant Zorka destroyed, puts it in her kicky handbag, and sneaks around some more. 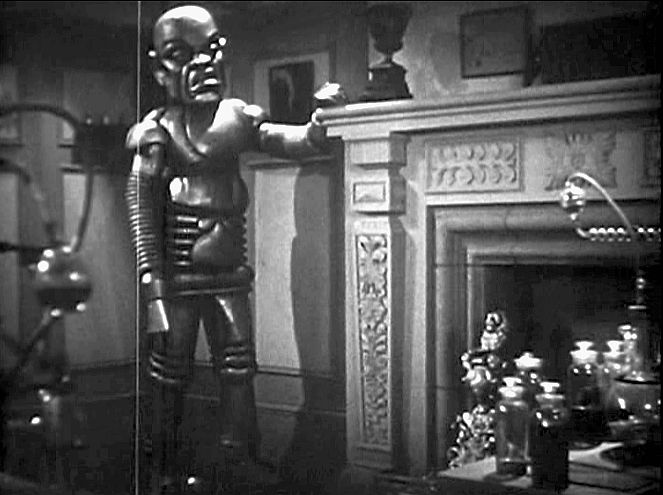 In case you were wondering, Iron Man is apparently kept only to open the secret passageway to the underground lab. This seems inefficient somehow, but again, I am not a scientist.

PGR screams when she sees an ArachnoBlam coming toward her, but fortunately G-Man Bob has arrived just in time to shoot the spider. You know, Bob, it’s not that big. Just slam a book on it dude, don’t waste a bullet. Monk panics because he’s always afraid that he’s going to get sent back to Alcatraz, but as he runs off G-Man Bob shoots him in the shoulder. Still, he manages to get pretty far with the help of an invisible Zorka who discombobulates Eddie Acuff (not difficult). Monk gets shot in the back by Bob, falls face first into the ground, only to be handcuffed by Bob moments later.  The humiliation is not necessary, Bob.  Let it go.

Just then, InvisiZorka jumps in a nearby car and drives off, so Bob, Eddie Acuff, and the rest of the government-appointed knobs give chase while leaving Monk handcuffed, shot, and face down in the dirt, completely unattended. Bob says Monk is only stunned, but I fail to see how a gunshot wound to the arm and another to the back would merely stun someone. Stunned or not, the spies grab Monk when the cops leave him behind, hoping for information on where Zorka has stashed his wacky inventions.

Bob and PGR are right behind Zorka as he drives off, but he gets ahead enough to park his car in the bushes, plant a disk in it, and hide in shrubbery.  While Bob investigates the empty car, InvisiZorka conks Bob on the noggin and pushes the car off a cliff! 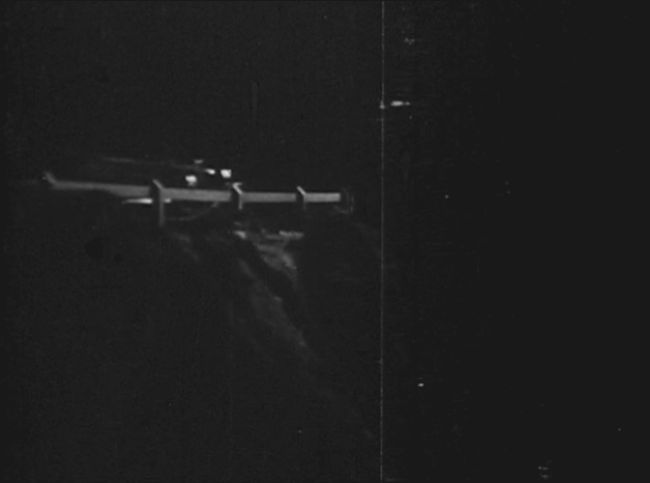 Mostly Dark Theater Presents: A car going off a cliff. Squint a little, it’s there, I promise.

Will Bob survive this deadly plunge? Will the film crew find a few 40-watt bulbs so we can see what’s going on? Is Regis Toomey still unconscious somewhere? Tune in later to find out!