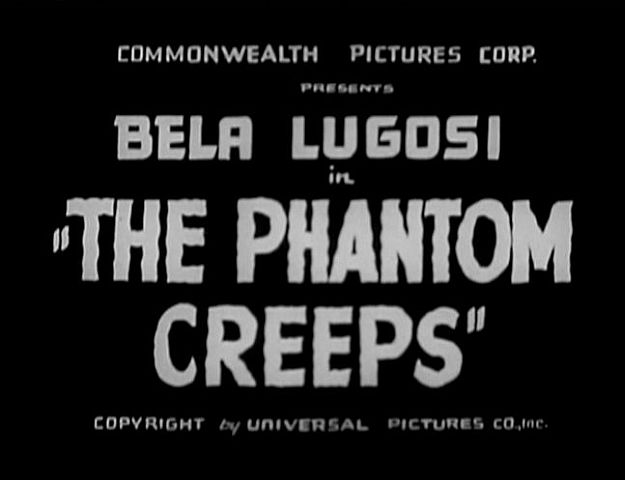 Dastardly Dr. Zorka (Bela Lugosi in a super realistic beard) and his escaped dastardly convict sidekick Monk have created many dastardly things. Mrs. Zorka worries about her be-bearded husband and enlists the help of Zorka’s former partner, Dr. Mallory, in an effort to try to talk Zorka down from the dizzying heights of mad sciencedom. 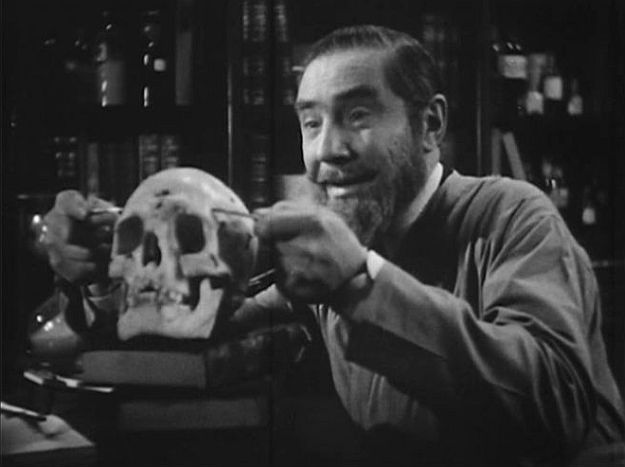 While they discuss this in the foyer of Dr. Zorka’s creepy manse, Zorka for no discernible reason starts reviewing his most recent insane inventions, first unleashing the Iron Man. 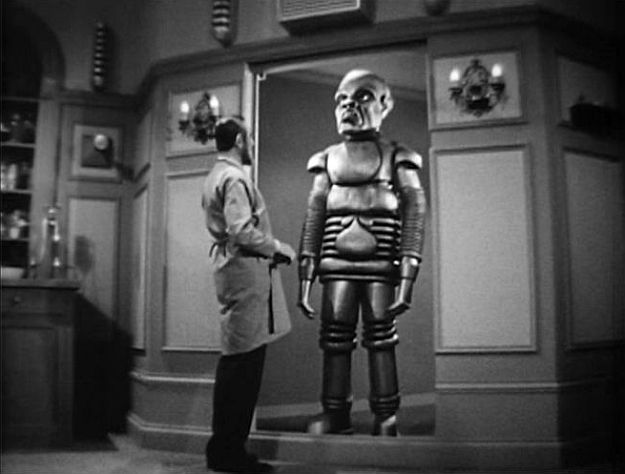 Before Iron Man can mosey about, he has to get out of the broom closet he’s kept in. Sadly, the set designer didn’t have a ruler with him, so the doorway is too short for Iron Man to cross without ducking down. Sadder yet, this leads to many scenes where Iron Man takes one step toward the doorway, we cut to a head-on shot of Iron Man looking straight at the camera and wobbling a bit, then we cut back to Iron Man having already gotten past the doorway. HILARIOUS.

Another hilarious invention are the spiders. The story changes moment to moment as to whether these are supposed to be real or not, but the fact that they have six legs and big cute googly eyes pretty much assures they are fake. Yet Zorka claims he injects actual spiders — spiders Monk is afraid to touch — with a special element that makes them track little disks he can plant anywhere. The spiders then explode (in a very cute manner) when they reach the disks. Zorka ruins a perfectly nice houseplant in demonstrating the spider-disk-bomb device.

Mrs. Zorka and the doctor try to talk sense into Dr. Zorka, who went into the discussion claiming he would just tell them enough to fool them into thinking he’s 100% Certified Sane. In less than 15 seconds, however, he’s ranting and telling them his crazy spider invention will be sold to evil doers in other countries, heh heh heh. 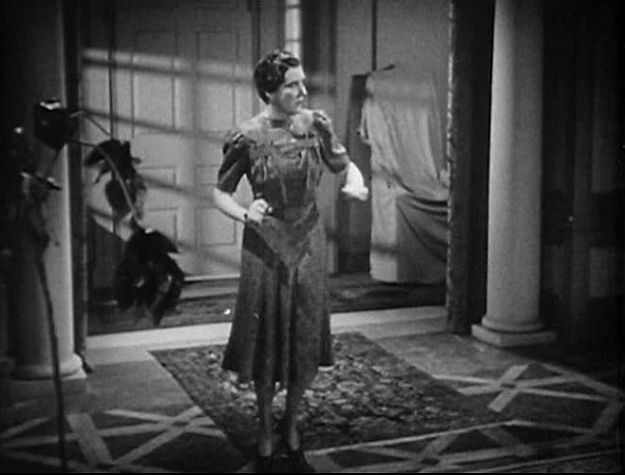 Mrs. Zorka standing in the foyer. Note the floor from the MGM ballroom set where these scenes were apparently filmed.

Dr. Mallory heads off to tell the government of Dr. Zorka’s plan. Mrs. Zorka stays to try to talk some sense into her husband, but he’s too busy heading out to sell his wacky inventions. “We will go to meet the agent of the spy ring,” he declares in dialogue more stilted than a Herb and Jamaal cartoon.

A couple of G-Men show up after Dr. Mallory rats out Dr. Zorka (he’s just jealous that he didn’t invent exploding fluffy spider toys), and seconds after they arrive by landing their light plane in the middle of an area with lots of trees and shrubbery, plucky girl reporter Jean Drew arrives. Drew spends the series in a series of inappropriate outfits for daytime work, stuff with veils and sequins and elaborate hats, and her makeup is caked on in a really unappealing way. She can’t muster more than a sleepy-eyed dullness for any reaction shots, and most of her scripted actions are positively priceless. 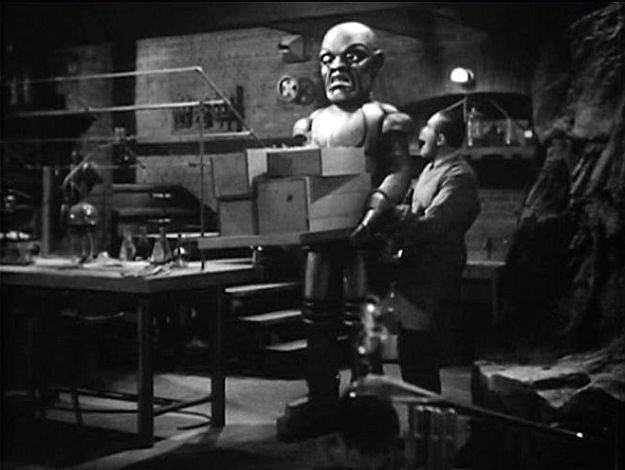 The G-Men, Bob West (Robert Kent) and Jim Daley (Regis Toomey), are on the case, and Zorka overhears the G-Men are after him. Zorka then unveils his devisualizer, one which sidekick Monk was supposed to finish so it could render the wearer invisible, but clearly Monk just bought a cheap rip-off from Sharper Image. 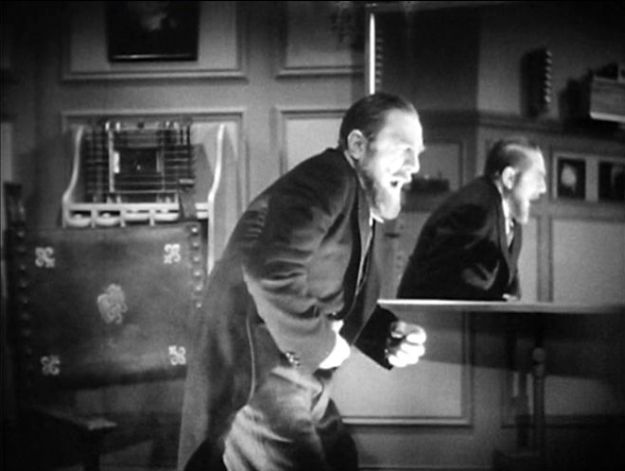 So it takes a little tweaking, but it finally works and Zorka is as invisible as 1939 special effects can make him. He then engages in De-Bearding Sequence #4 (ask Tom Cruise, he’ll tell you) and heads out with Monk posing as his limo driver. They pick up a hitchhiker and fortunately crash the shit out of their Model T, killing the transient but leaving nary a scratch on their bods. The dead dude looks like Zorka dressed as Torgo, so they get the completely sane idea to dress him like Zorka instead and place him near the burning wreckage so the G-Men think Zorka is dead. 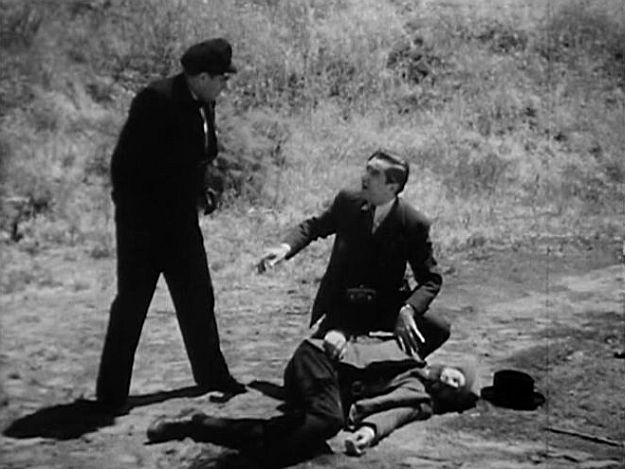 Zorka continues his completely normal, everyday plan by planting a disk in Plucky Girl Reporter’s purse. When she sneaks onto the G-Men’s plane, a fuzzy spider bomb follows her. She hides in the plane’s closet — yes, apparently tiny planes have closets — while Mrs. Zorka and the G-Men board and fly off. Meanwhile Jim Daley (Toomey) is both flying the plane and playing with one of the disks when he learns the hard way just what those disks are. The spidey explodes, Daley is knocked out cold, and Bob West goes hunting for parachutes… 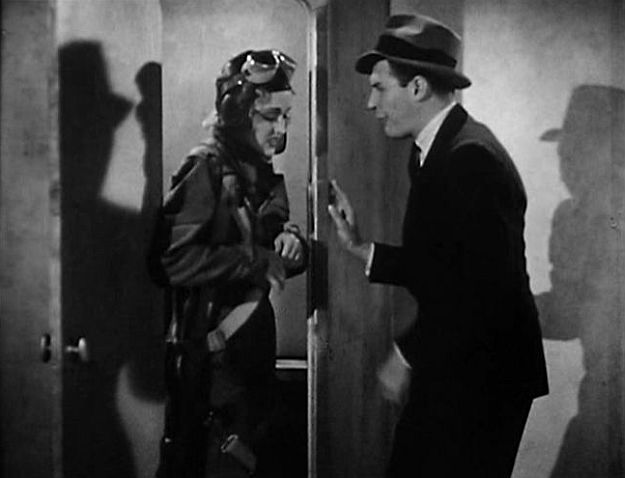 …only to almost get knocked over when Plucky Girl Reporter, who has already stripped to her skivvies and put on a flight suit, parachute, helmet, and goggles in the 17.2 seconds since Toomey got his ass knocked out, bursts out of the closet and runs for the door. She looks somewhat ashamed of herself, at least. As she pops the chute and floats gently down to Opportunistic Asshole Island where she belongs, Bob and Mrs. Zorka are still in the plane when it hits the ground.

OH MY GOD! THE HUMANITY! IS REGIS TOOMEY OKAY?!

Find out in Chapter 2: Death Stalks the Highways!