This is my entry for the Pussy Goes Grrr! Short Animation Blogathon.

Warning: Naughtiness to follow. No pictures will be unsafe, but the videos linked and the words posted are NSFW. You have been warned.

We begin our hour-long program of animated shorts with a Chuck Jones double feature of the 1951 Looney Tunes short “Rabbit Fire” and the 1952 “Rabbit Seasoning.” There is precious little difference between the two, with the latter considered a sequel to the former. Both are part of what is called the “hunting trilogy” with “Duck! Rabbit Duck!” — known to most of us as the “It’s fiddler crab season!” episode — being the finale. Honestly, none of the films differ significantly from each other, with the exception of a few gags and the choice of drag Bugs wears, though in “Duck! Rabbit Duck!” he doesn’t even appear in drag, which is a shame because he’s a knockout in a dress.

Both “Rabbit Fire” and “Rabbit Seasoning” feature the same music, the same plot devices, and even the same style of an outdoor background with fall colors; despite Wikipedia’s claim to the contrary, “Rabbit Fire” doesn’t seem to be set in the spring, unless spring is known for red, orange and yellow leaves. Yet even though both episodes have similar landmarks, such as a group of four trees repeatedly seen in the distance, these backgrounds are unique to each episode and not simply recycled from the first.

The plots are the same, though: Daffy learns it’s duck hunting season and decides to try to confuse dimwitted hunter Elmer Fudd into thinking it’s rabbit season instead. Bugs gets the upper hand, of course, while Daffy gets repeatedly shot.

Actually, most of “Rabbit Seasoning” is spent with Elmer Fudd impatiently jamming his rifle into holes, then prematurely pulling the trigger when a sexy rabbit in drag kisses him. 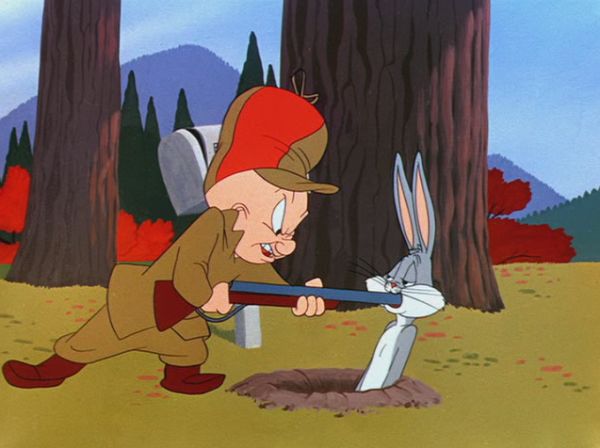 This hunting trilogy changed the dynamic of previously-defined Looney Tunes characters, retaining Bugs as a trickster but re-casting Elmer as a hunter out to kill the animal characters and Daffy as up to no good, yet always thwarted by Bugs just as Elmer is.

Chuck Jones (director) and Michael Maltese (writer) quite clearly knew what they were doing when invoking transgender, gay, and even bestiality subtexts in these ‘toons — though I confess I don’t know what subtext a duck with a plunger on his butt invokes. The fun of these cartoons is that the cross-dresser is not being judged but is rather the smart one, the one who brings out the obvious, shall we say, affection the hunter has for that which he tries to kill. In the 1990s, Cartoon Network began to fiercely court the 21-34 demographic by repurposing the 1960s cartoons shown in incessant reruns until the 1970s; that is, during the childhoods of the demographic they wanted to draw. “Sealab” became “Sealab 2021” and Harvey Birdman eventually passed the bar, but it all started when an aging Space Ghost took a job as a talk show host. “Space Ghost Coast 2 Coast” ran for a full decade and was 15 minutes of wacky interviews interspersed with Space Ghost bitching about whatever was upsetting him that day and, when things got slow, zarking the shit out of his enemy-slash-sidekick Zorak.

Not only did the callback to the original “Space Ghost” cartoon appeal to a 20-something audience, so too did the irreverent interviews with subjects clearly never briefed on what the show was actually about. Some interviewees like Schoolly D and Adam West knew what the show was about and were happy to engage in shenanigans, while other guests like Joel Hodgson and Fred Schneider seemed deeply irritated. 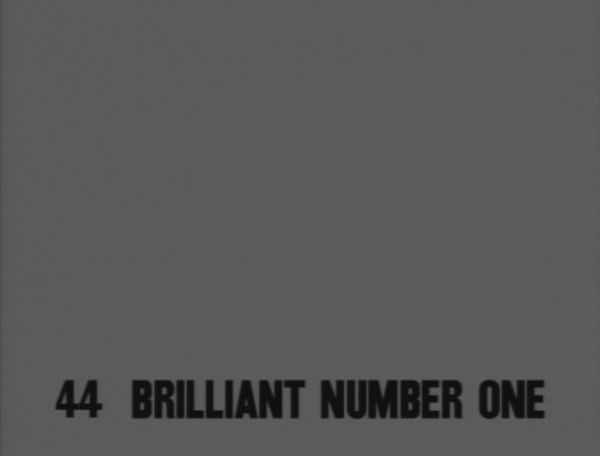 One of the best episodes and a clear fan favorite is the fourth season “Brilliant Number One” featuring interviewees Peter Fonda and Buzz Aldrin. This episode only aired once, with subsequent showings appearing under the title “Brilliant Number Two” which was merely “BNO” edited with a new beginning explaining that Space Ghost was caught in a rerun. Thankfully, Cartoon Network’s burn-on-demand DVDs offer the original episode, because I think we were all getting a little tired of playing our worn-out VHS copies.

The intro to the original “Brilliant Number One” that was later replaced was probably off-putting to those unfamiliar with European art cinema of the 1960s. Let’s just say that it’s a bit esoteric. Once the seemingly random laughter and deep thoughts fade out, the usual color fullscreen presentation changes to atmospheric black and white in letterbox format — something still pretty novel back in 1997. Sonny Sharrock’s SGC2C theme “Hit Single” is replaced in this episode with the song “Rammstein” from Rammstein’s album “Herzeleid.” (Sharrock died in 1994, soon after composing “Hit Single” and other music for SGC2C. This music was released on a soundtrack.) 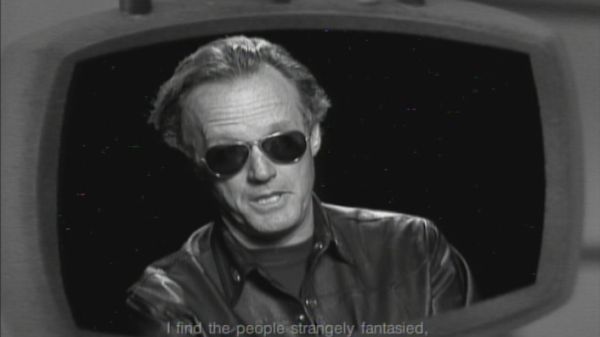 What follows “Rammstein” is a trippy version of the usual SGC2C antics. Low audio feedback plays throughout the show as stanzas of Shakespeare’s poetry fade in and out like subtitles. Fonda relates stories obviously based on spaced-out pseudo-spiritualism of the 1960s while Aldrin, having decided the interviewers’ questions were so silly they must be working for a kids show, cheerfully asks what they imagine the Ghost Planet looks like. 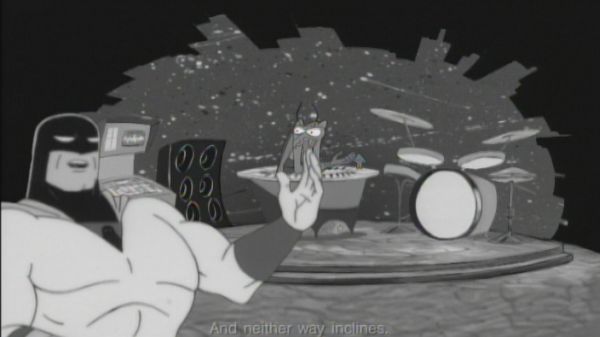 Yet Space Ghost is his normal incompetent self, blaming his own errors on a series of unlikely and never-seen villains such as The Polisher, The Subliminator, and The Confusatron. (“I can feel his baffling presence.”)

The early 1990s were a rather odd time for animated shows, as college aged kids were tuning in on Saturday mornings to The Kids’ WB, catching “Earthworm Jim” and “Freakazoid!”, and heading over to CBS to watch “Garfield” (mostly) unironically.

Don’t try to fight it, folks, it’s time for “Screaming With Binky.”

Animated shows directed to an adult audience really took off in the late 1990s thanks to Fox and Cartoon Network, especially CN’s nighttime programming block known as Adult Swim. Adult Swim showed anime, reruns, and 15-minute shows based on repurposed Hannah-Barbera ‘toons, but also quickly branched out into new programming. These programs are still in production today, and more often than not only last a season or two before being replaced with something that has more butts in it. Eventually Adult Swim will reach Peak Butt, and lord only knows where they’ll go from there. 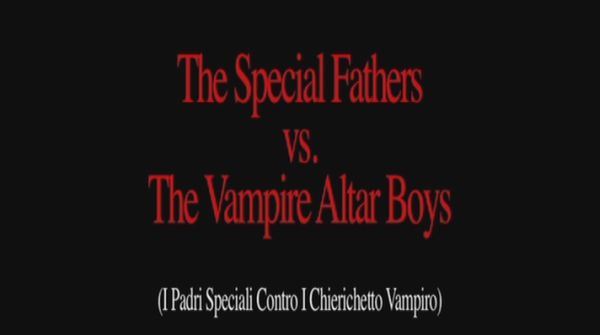 One of the shows that apparently did not contain enough buttocks for regular Adult Swim viewers was “Lucy, Daughter of the Devil.” Produced by many of the same people behind “Home Movies” and “Metalocalypse,” LDotD was about the hipster 20-something daughter of Satan. She has an art degree and no real ambition, but her goofy, Cosby-sweater wearing father tries to push her into her destined role as the Antichrist. Meanwhile, three Special Clergy of the Catholic church have been sent by the Pope to destroy the Antichrist and prevent the end of days. Because everyone is deeply flawed and often incompetent, hilarity ensues.

Only eleven 12-minute episodes were produced. Episode 8 was “The Special Fathers Vs. the Vampire Altar Boys,” where we learn the Catholic church has been keeping a deadly secret: Altar boys have been turning into vampires and devouring entire congregations. The situation is clearly equated with the real-life issue of pedophilia and abuse within the church, and though the show is a comedy, the parallels are treated with a dark sarcastic tone that does not diminish the real-life problems being referenced. Not every episode of LDotD was the same, unfortunately; an early episode had a rape joke that rightly caused plenty of complaints. 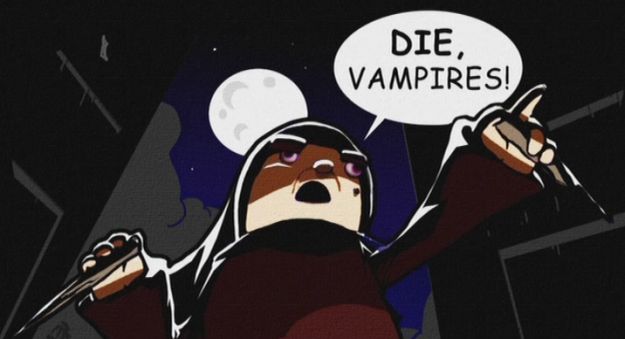 LDotD references Italian horror films as well as films such as Mulholland Dr., Play Time, and The Royal Tenenbaums. “The Special Fathers Vs. the Vampire Altar Boys” owes much of its overall feel to almost every vampire hunting film in existence, but with added ass-kicking nuns and “Boogie Oogie Oogie.”

Meanwhile, one of the most successful shows on Adult Swim has been “The Venture Bros.” which, admittedly, has more going for it than an impressive butt quota. Usually a half-hour show, a 10-minute Christmas short was produced in its first season in 2004. 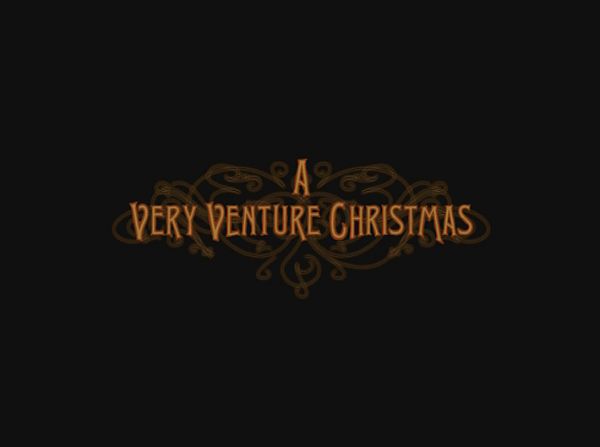 The Christmas episode immediately reminds you that “The Venture Bros.” began essentially as another retread of old 60s cartoons, complete with an intense angular retro style and goofy pastiche, but “Venture Bros.” quickly evolved into its own themes and artistic style. Yet “A Very Venture Christmas” (as well as the show’s pilot episode) heavily borrow on 1960s Hannah-Barbera kid-friendly dopeyness, apparently in an attempt to create a wildly irreverent take on “Johnny Quest.” Though they succeed on the irreverence, the episode fails to provide much else. 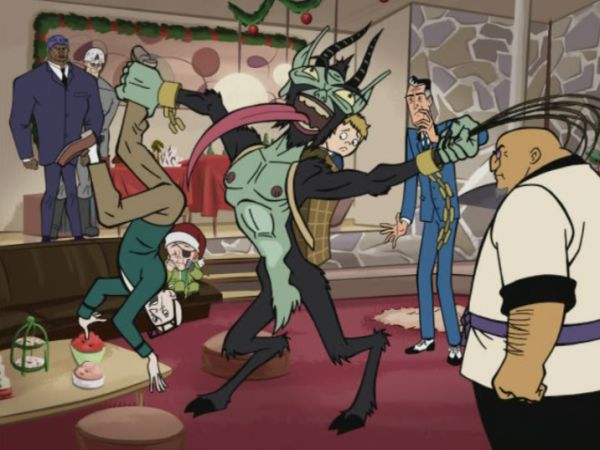 Everyone is rescued when bodyguard Brock Sampson runs in screaming, “Fuck you, here’s your Christmas special!” And if you take that dialogue as coming from the writers of “The Venture Bros.” rather than a character on the show, it goes a long to way to explaining just why this particular episode, while not a bad episode by any means, still falls flat in comparison to other much better “Venture Bros.” outings. 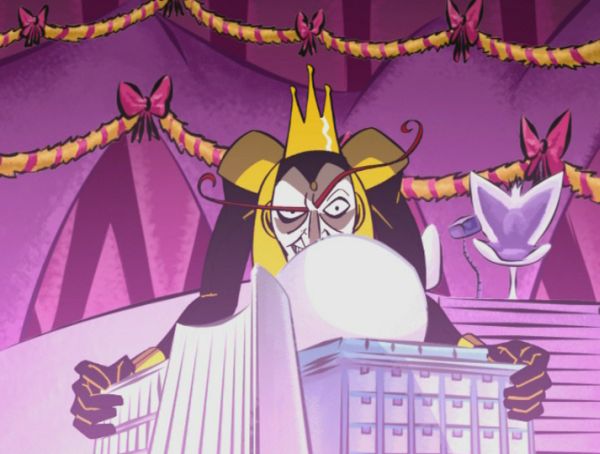 A sub-plot involves The Monarch trying to blow up the Venture compound, and he seemingly succeeds until Dr. Venture wakes up. It was all a bad dream! In reality, they had simply crashed the Venture jet into the birthplace of Christ on Christmas Eve. So that’s better.

In my misbegotten past, I spent a lot of time collecting nude photographs from the late 1800s through the 1920s. I’m not even going to coyly pretend it was for historical reasons or research; those women are beautiful, the photography amazing, and the fashions delightful. Nowadays these photographs are all over the internet — follow any five Tumblr blogs and you’ll find one that features these nudes — but at the time I collected them only a couple of pay-to-view sites and Usenet had any. I first heard of “Buried Treasure” nearly 20 years ago on one of these Usenet groups, and I later asked about it on alt.movies.silent, which was probably the last question any of the AMSers expected because they behaved in a manner, well, a lot more genteel than I do, let’s put it that way. Very little was said in response to my query, mainly the stuff you read on Wikipedia nowadays, though one AMSer related that a local channel he watched in the 1970s which showed silents after midnight on Saturdays ran “Buried Treasure,” unannounced and without music; apparently, no one complained. That’s how we used to see things like this. You kids with your YouTubes and your torrents, I swear. 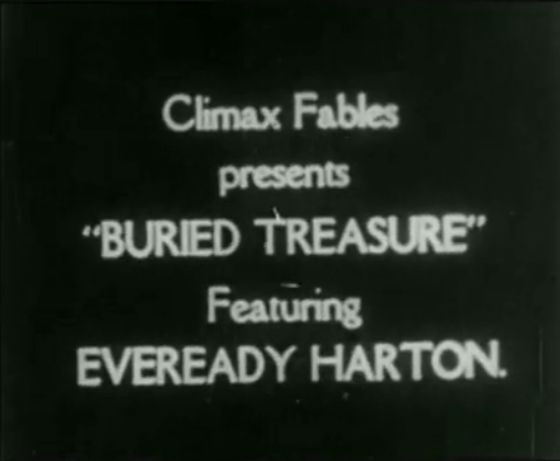 “Buried Treasure” is about Eveready Harton, a nude man with a penis that must be about 2 1/2 feet long, stranded on an island and forced to, er, make do with whatever orifices are available. The tale told in the Winsor McCay party story states that once the first part was animated, the final frame was given to the next studio who then created the next segment, and so on. Since Eveready starts out stranded on an island and quickly ends up on a farm in the U.S. Southwest, that story seems likely.

“Buried Treasure” is puerile, designed entirely for laughs in a stag party atmosphere, and available in its entirety here on DailyMotion. It is so X-rated that I am going to tell you again that it is NSFW. As silly as it is, it’s interesting in a historical sense — I mean it this time — and occasionally funny. I confess a fondness for the lovely floating heart generated by smooching that immediately turns into an erect penis; it’s funny because it’s true. 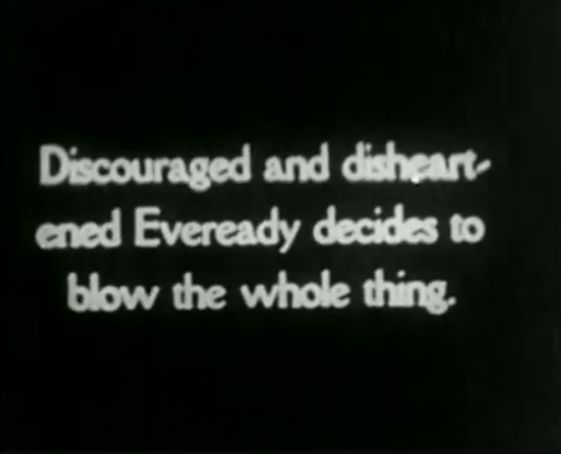 Whew. Anyone else hot in here? 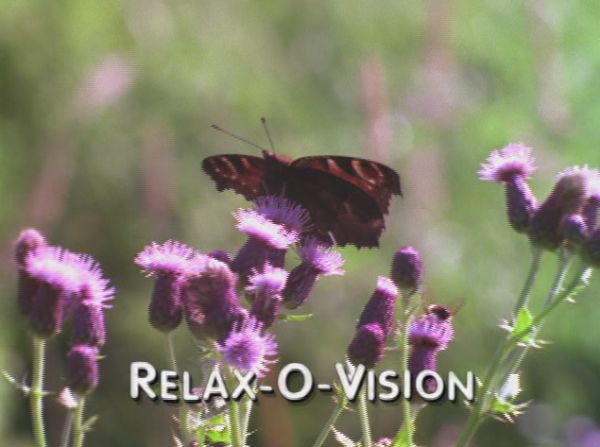 Please visit Pussy Goes Grrr!, the kind host of The Short Animation Blogathon, for more posts from other fine participants! And a big thanks to Pussy for hosting the ‘thon!