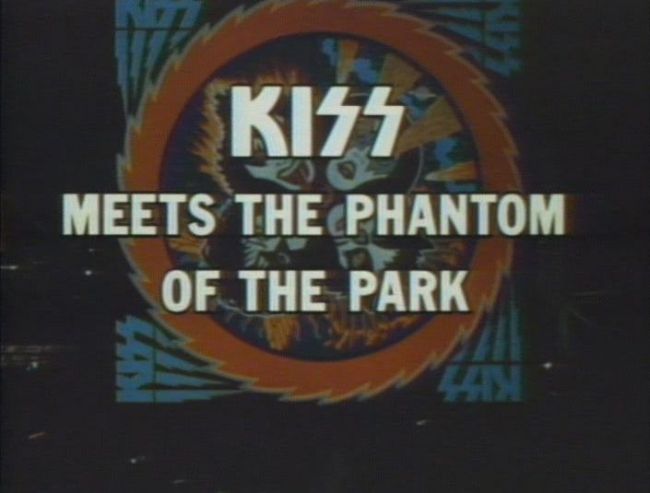 Welcome to (technically) Day One of the Camp & Cult Blogathon! Don’t forget to check out all the great entries here at the main Camp & Cult Page. If you do the Twitter thing, I am tweeting entries via my account @glitterninja, and I use the hashtag #sbbnccb if there is enough room in the unforgiving 140-character limit.

Also, I would like to apologize for the delay on my own first post for the ‘thon. My goal of one-a-day has not wavered, though I didn’t realize until too late that my late-night writing schedule means that, to do a post a day starting on the 17th, I should really have begun blogging the night of the 16th. In an effort to catch up, I hope to get two posts done in short order so I don’t spend the entire blogathon a day behind. It’s just like me to black flag myself on the first lap, though.

Now, I’d love to use that as a lead-in for this particular cinematic pile of goo, but there is no smooth way to segue into KISS Meets the Phantom of the Park (1978). As I’m fond of reminding people, while I may have been alive for most of the 1970s, yet I do not understand the 1970s, and that goes double for the KISS, er, phenomenon.

The opening moments of Phantom of the Park perfectly illustrate my confusion: KISS, in a series of double exposure shots, is shown performing “Rock and Roll All Nite” over scenes of carnival rides at… well, at night, because this movie is nothing if not terribly literal. It’s all very boring, especially because the music of KISS is decidedly bland — this is pure dull pop, and not a single riff, lyric or drum solo matches the attempted hardcore, leather-and-metal antics of Gene Simmons’ waggling tongue or Paul Stanley’s head thrashing. What was the appeal?

This must have been obvious to the culture at large, given that the clownish band was marketed toward children instead of the hot, nubile groupies and their hard-rockin’ boyfriends the band apparently thought it should attract. It is therefore no surprise that a KISS television special geared for the 12 and under crowd came to pass, though it is kind of surprising (and a whole lot of amusing) that the band still expresses shock that they were portrayed as buffoons.

I can tell you with expert certainty that Phantom aired on October 28, 1978 on NBC, and I know this because I watched it myself that night, as did my husband, so when you ask yourself, “Self, what kind of idiot kids wanted to see this movie?” now you know. To be fair to my husband, though, he was living in California at the time and so watching a film shot at a California amusement park was kind of like watching a home movie. Me, I didn’t have an excuse.

There are two versions of the film, the television version and an international version released in theaters called Attack of the Phantoms (among other titles):

The international version is the easiest to find nowadays, though there are used VHS copies of the original TV version floating around. There are big differences between the two versions, but having seen both within the last year, I can’t for the life of me remember more than two differences, the biggest being the talismans: 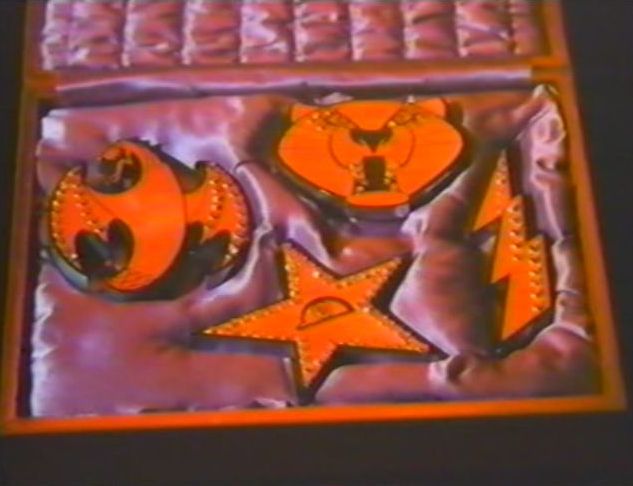 Each KISS band member has a theme BECAUSE THIS IS TOTALLY A KID’S BAND I MEAN COME ON… ahem. Each band member is basically a superhero in Phantom, which explains why they’re always roaring like jungle animals and shooting lasers from their eyes. Their power comes from the talismans, or is at least represented by these talismans, and please don’t get on my case because I don’t remember which. The top pic is of the TV version of the talismans, which are clearly a set of cheap plastic Cracker Jack trinkets. The bottom pic is from the international version, which is an improvement, though someone must explain to me why the lightning bolt is the one talisman that is not lit with Christmas bulbs.

For more about each band member’s persona, check out Bargain Bin Review and Thomas Pluck’s entry on the movie for his 2008 Schlocktoberfest series.

Behold the excitement of concert balloons.

There is a lot of concert footage in this film, which is helpful because it’s easier to nap through than listening to Gene Simmons speak banal bits of dialogue with post-production reverb. The fight sequences are pretty weak, which is a hell of an achievement since KISS fights either strange animatronic creatures or strange animatronic versions of themselves, something that seems pretty bad-ass on paper. But since everyone on screen is a stunt double in various forms of makeup, masks, or makeup plus masks, it gets tiresome quickly. The stunt doubles for Ace Frehley change frequently, and if you’re looking for the infamous scenes where a black man doubles for Ace, I don’t know if I can help you. During the fight with Frankenstein’s monster about an hour 15 minutes into the film and the finale where KISS fights animatronic KISS, it appears to me that an Asian man is doubling for Frehley.

The real Ace stumbles and squints and sways throughout the film, and surely the only criterion for a take making the final cut is that it be one where Ace remained standing. The dialogue is poorly dubbed, even more poorly written, and I get the impression that Paul Stanley is a very nice man but has difficulty with polysyllabic words. As more than one person has pointed out, this film is a live-action Hanna-Barbera cartoon, complete with sound effects and weak puns and Joe Barbera as a producer. 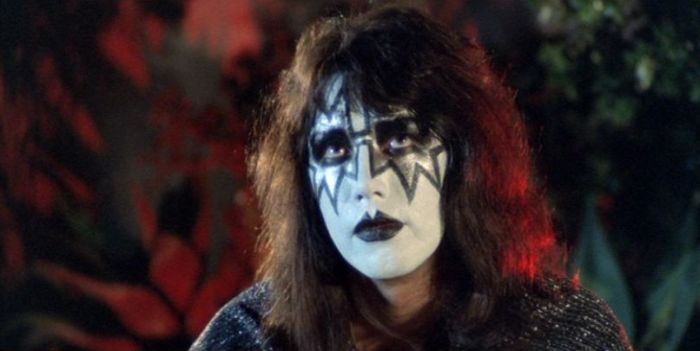 So what is this film about? Fuck if I know. No, wait, I do kind of know: It’s a riff on Phantom of the Opera, where a completely bugfuck scientist (Anthony Zerbe) who has discovered how to turn people into robots gets fired from his animatronics job at the park and takes to the underground… er… areas to lurk and get revenge. Those underground areas are really his workspaces from back when he had a job, so it’s not so much a lair as an office, complete with paperwork even after he’s been fired, which I guess would make anyone mad.

KISS is playing a concert at the park just as science guy, who is also an avid caneshaker and kids-these-days-er, goes nuts. The band uses their so-called powers to fight his evil, evil robots. Meanwhile, there is a love story with two bland 20-somethings, plus buttstars.

Very silly things happen, such as the band lounging near the pool in full 12-layer leather gear plus heavy robes and makeup, and the robots that evil science guy has invented stick their tongues out for no reason. 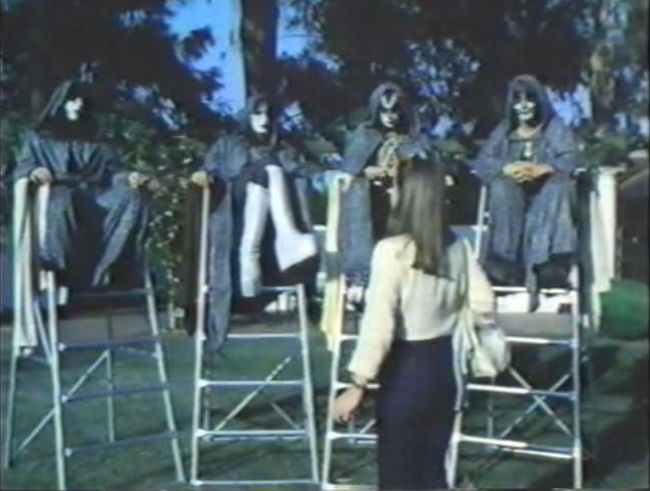 Watch for Brion James as one of the two security guards that a rampaging animatronic Gene Simmons almost disembowels (family fun!) and Lisa Jane Persky as an adorable TV-approved punk chick who gets her comeuppance thanks to the robot scientist, whose shtick is totally not stolen from House of Wax at all. 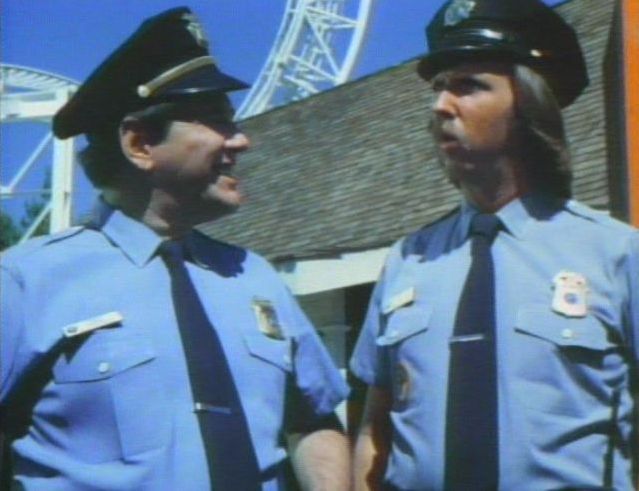 Brion James also appears in the background of a certain 1980 movie I’m going to review soon. You know the one I’m talking about.

Basically, if you’re wanting to drink cheap sangria and laugh at stupid shit, KISS Meets Phantom of the Park may be for you. It depends on your tolerance of sitcom antics, middle-of-the-road pop and essential buffoonery. If you’re looking for something entertaining, I suggest skipping this film and spilling a little Country Time pink lemonade on the floor and watching it dry instead.