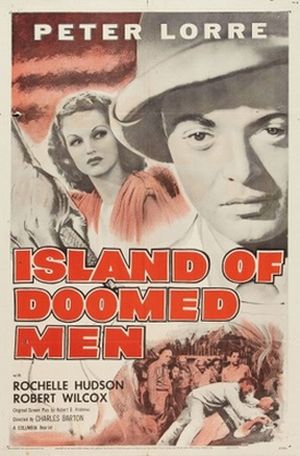 It’s Day Two of the Camp & Cult Blogathon! More terrific entries have been added to the main Camp & Cult Page — check them out! If you have a post you want to submit, comment or email me a link. Details here!

As the years go by and I see more and more really just, I dunno, horribly shitty movies I guess you’d call them, I question what exactly it is that makes some bad movies fun to watch. Not all bad movies are good bad movies, as the saying goes. Most are boring, barely fleshed-out cinematic skeletons unable to support even a moderate plot.

Many programmers back in the studio days are such films, and Island of Doomed Men, despite its lurid promises and moderate reputation, is a prime example. Its subject matter couldn’t have garnered anything more than incredulity even in 1940, and so one must assume the plot was chosen for its lurid nature. Yet the promise of salaciousness is never truly delivered upon, which renders Island of Doomed Men mostly pointless.

Make no mistake, there is an unspoken promise of both overwrought acting and naughty things. Government agent Mark Sheldon (Robert Wilcox) is given his first undercover assignment, as well as a partner, Agent #46, played by an uncredited Addison Richards. Agent 46 lays down the deets for Sheldon’s mission: He’s to infiltrate Dead Man’s Island, explained by 46 as “United States territory, but it’s so small and unimportant that nobody pays any attention to it!”

Trying to give a fictional location some reality by explaining it away as being completely unimportant? Giving an agent the most boring non-prime number ever as his character name? Assigning a newbie to such an important project? Film, you have my attention.

The island is owned by Stephen Danel (Peter Lorre), a plantation owner who employs paroled men to dig for diamonds in his mines, but the government knows he runs it like a slave camp. It’s never explained why they can’t do anything about it without sending the inexperienced Mark Sheldon to infiltrate the place, and trust me when I tell you this man is a complete noob. After a ton of newbie mistakes that Agent 46 scolds him for, 46 is shot by a mysterious man outside the window. He continues to scold Sheldon until the moment of his death, which is absolutely hilarious. 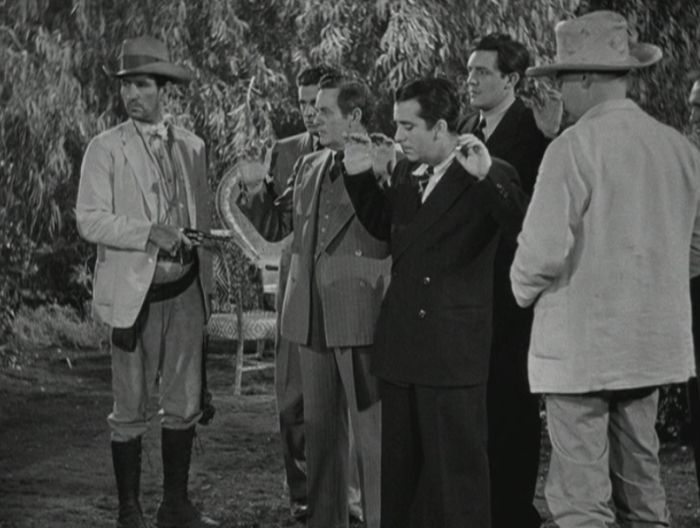 See these men? They’re on an island, and also doomed.

Sheldon is so hopeless he gets nabbed by the cops immediately and sentenced to prison for 46’s murder, despite the fact that the state only knows him by the fake name John Smith, never did figure out who 46 was, and could not provide a motive for Sheldon to commit the crime. Now, I’m no legal expert, but I think the state (or government) has to know who you are before they can convict you.

Okay, so the film is completely bonkers up to this point, but don’t get your hopes up. It loses steam, mostly because the character of Danel is weak, not for lack of strength on Danel’s part but for lack of conviction by the screenwriters. Danel had an office across the hall from 46 — everyone in the same place is a time-honored tradition, as the Bradley Building residents could attest to — and he was monitoring the Feds during the meeting, then sent one of his men over to kill 46. Danel at this point is menacing in a very cold, austere sort of way, and continues to be so as he first arrives back at his island. But after a time-passes montage showing Sheldon in prison for about a year, no more work is put into making Danel sinister. He’s a bit menacing toward his wife Lorraine (Rochelle Hudson) but it is woefully unconvincing, and the calculating man of the early scenes is replaced with someone mostly boring. 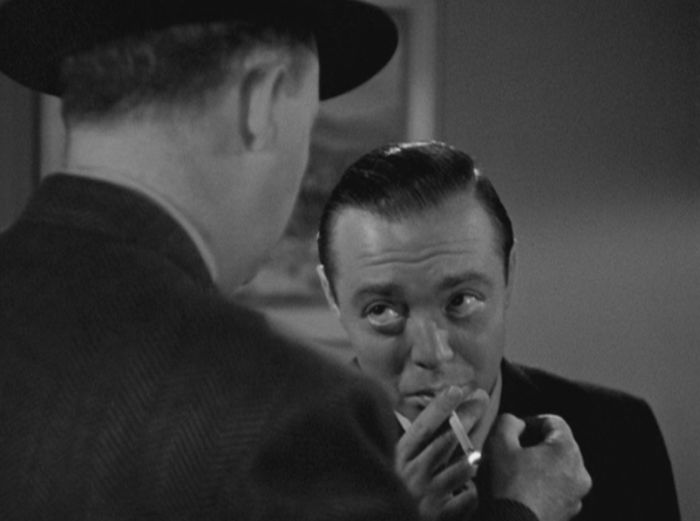 Back when everything in this movie was gearing up to what I hoped would be absolute insanity, the recurring theme of men lighting Danel’s cigarettes for him was introduced. This was about the most the film ever did in its half-hearted attempt to create a homoerotic context of Danel keeping a bunch of sweaty mens under his control, whipping them with the lash when they misbehave. The context is never solidified, and frankly, I need more than an afterthought of salaciousness to keep me amused. For instance, all the slaves are kept quite clothed except for a couple of brief whipping scenes, and even then bodies are well covered by setpieces; I mention this only because the IMDb keyword phrase “bare chested male bondage” applied to this film seems a bit overzealous. Danel doesn’t whip the men himself or linger to watch, and with the exception of one up-and-down look during some rather dull dialogue, there is just no there there. 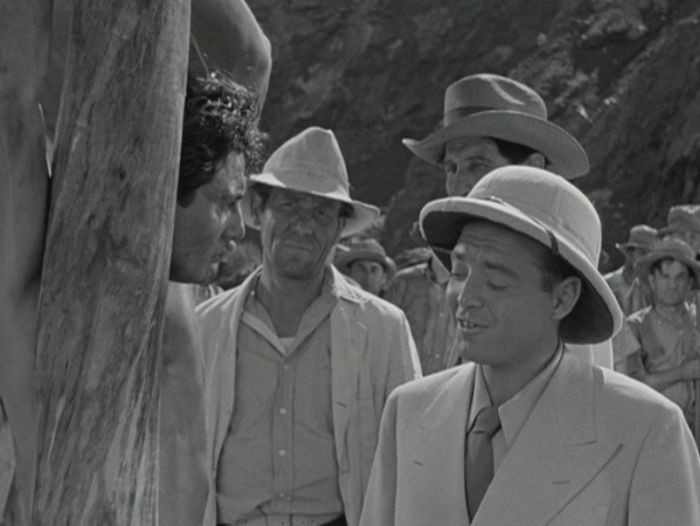 Danel’s former showgirl wife Lorraine is now kept a prisoner on the island, though I find this difficult to believe, as her wiles plus the obvious access many henchmen have to various parts of the island would make for a pretty good escape plot on its own. Hell, a good bumrushing from maybe 1/4th of the men would have overthrown Danel’s island. Yet everyone apparently just put up with the situation until Sheldon arrived, which seems like poor planning.

A year after Sheldon was convicted of 46’s murder, Danel, who knows Sheldon is a Fed, arranges for him to serve his parole on Dead Man’s Island. Sheldon knows about the island of course, but when he gets there all he does is flirt with Lorraine. Not once do we see any reference to his previous knowledge of the island, at no point do his skills as a Fed come into play. Further, Danel knows Sheldon is an agent yet keeps him alive just to find out how much he learned about the island from Agent 46. What does it matter? Sheldon is disgraced and abandoned by the government, 46 is dead and it’s been a year without anyone coming for you, Danel. Just kill Sheldon and move on with your evil, evil life.

But this does not happen, so the plot continues. Hudson is about as dull as anyone on screen can be, though her enormous wardrobe of flowy gowns — during one cinematic day, she changes at least four times — and her too-high pencil eyebrows add some interest. And by interest I mean cruel chuckling. 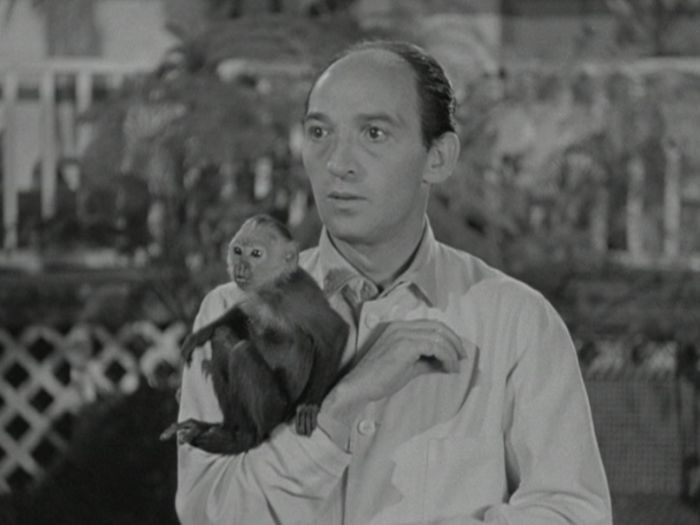 This is Siggy (George E. Stone) and his adorable, uncredited monkey. Danel hates this little critter (the monkey, not Siggy) and at one point grabs an obviously stuffed model monkey from Siggy and shoots it. This comes back to haunt him, as you would expect.

Robert Wilcox plays as though he were in a Dana Andrews mimicry contest and there were only two prizes, First Place or death. He has Andrews’ mannerisms down pat, from the blinks and the furrowed brow to the head gestures when indicating something off screen. But he doesn’t have the wry, world-weary nature of Andrews or the natural charisma, and I doubt Wilcox could manage much emotion for any reason, so the performance just seems kind of sad.

Lorre is quite good if understated, though I don’t personally agree with the choice of underplaying a role that is so lifeless in the script. Yet when Lorre added some cruelty or lasciviousness to his actions while speaking some of that ineffective dialogue, there was a clash of styles that often rendered scenes bizarre, and not in the good off-kilter woo-everyone’s-fucko-bazoo kind of way, but in the “Wait, was there even a director on this film?” kind of way.

Clocking in at barely 76 minutes, Island of Doomed Men is a pleasant enough time-killer, but disappointing for anyone looking for campier fare.