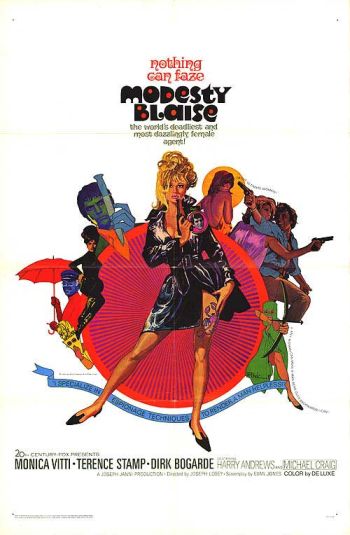 Welcome to Day Twelve, the final day of the Camp & Cult Blogathon! Don’t forget to read the submissions here on the main page. If you have one to submit today, please email me or comment here, and it will go up later tonight.

Thanks go out to so many of you for the terrific submissions, great comments, retweets, participation, and general revelry during this really, really long blogathon. It has been an amazing time, and I hope you’ve had as much fun as I have.

For my final entry, I hope you will forgive me for submitting a short post. My acromioclavicular joints are madly protesting these twelve long days of typing and won’t allow me to do much today.

But that is probably for the best, since I have very little to say about Modesty Blaise (1966) that has not been said before. A terrific run-down of the film can be found at Cult Movie Reviews here, and it is highly recommended reading.

Monica Vitti is Modesty Blaise, fabulous international spy-slash-jewel thief. She is hired by Sir Gerald Terrant (Harry Andrews) of the British government — I think, but I’m not sure, for reasons I’ll explain momentarily — to make sure £50 million in diamonds gets to the proper Middle Eastern sheik in exchange for oil reserves. Modesty warns them that if she is not told the full story about the diamonds and the plans to rob them en route, she will consider herself a free agent and steal the diamonds for herself. Thus begins a strange series of events that are part spy spoof, part random stream of consciousness events, and partly based on the long-running comic strip begun in 1963.

Something that this ‘thon has solidified for me is that a film can be as crazy, stupid, strange, inept or dull as possible, but as long as there is a cohesive internal theme running throughout, I will forgive a lot. A lot. For instance, Sh! The Octopus is one strange damn movie, irritating on all fronts, but the finale explains the entire film and thus redeems it for me. You’ll Find Out sticks to its really silly guns for the entire film; Where Love Has Gone insists upon being trashy for every second of its run time. Meanwhile, Lace only dreams of being as trashy as WLHG, Island of Doomed Men simply can’t keep its focus for even a short run time, and Modesty Blaise, similarly, jumps all over the place like a bad Vaudeville act. “You don’t like that joke?” says the film. “Well then, I got another, and another, and another, and eventually, you will laugh.” 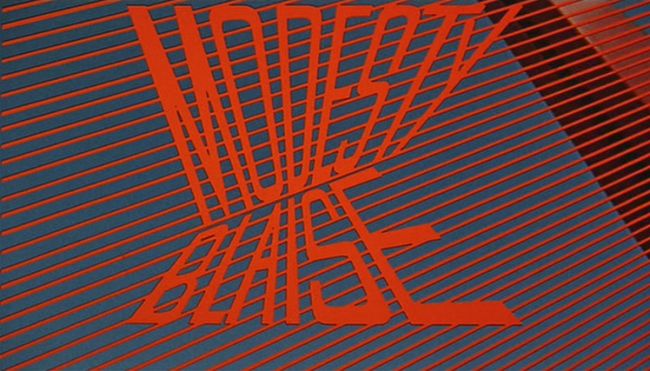 Truth be told, you probably won’t. The plot is obviously secondary, which is why it’s impossible to know why the British government hired Blaise in the first place. They keep important information from her and try to send her on pointless errands in the same way they try to fool the actual thief, Gabriel (a tremendous Dirk Bogarde). Maybe they want to keep an eye on her in case she steals the diamonds, or maybe they were hoping to fool her into helping, or perhaps knew she could get the diamonds to the Middle Eastern powers they want to have them because she knows Arabian royalty. 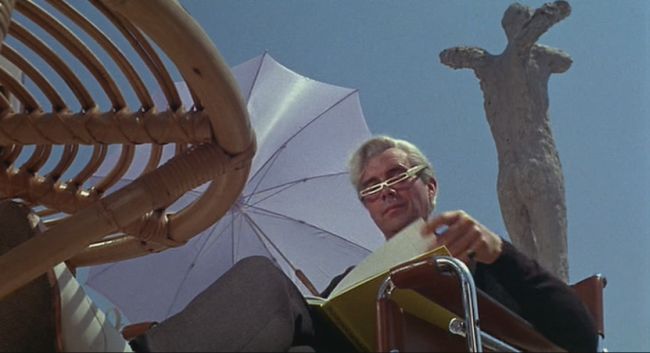 It’s all unclear, which would be fine if the action or if the satire was worth watching on its own. There are times when Modesty Blaise is truly playful and fun, mostly when Dirk Bogarde and Rossella Falk are on screen, but so often it’s just inexplicable. For instance, the humor intended in the scene where Modesty sneaks into her sometimes-boyfriend’s apartment is completely unfocused. It’s impossible to tell if she’s there to spy on him because she believes he’s working for the government that is trying to trick her — and of course we have no idea why they would be anyway — or if she thinks he’s after the diamonds too, or what. There’s a moment where he thinks she’s an ex-girlfriend with another name, and it’s possible Modesty was once in disguise as that other woman, but what does it mean? Was he previously in a relationship with both Modesty and her alter ego? Or did he just find out he was dating Modesty the whole time and never knew? 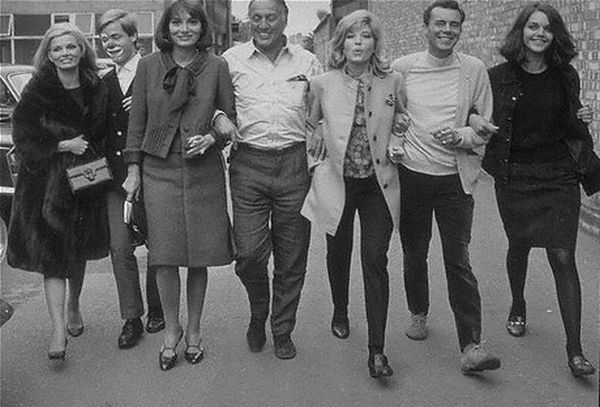 The biggest question, though, is why the viewer should care. There has to be a reason to care about Modesty and her antics, but when a character has no actual character to relate to, it kills audience interest. Modesty in the film is whatever the filmmakers wanted her to be at that moment. If bumbling seemed funny, then they made her bumbling. If hyper-intelligent was funnier, then that’s what she was. That said, I wondered often if Vitti’s obvious disinterest (or inability) to pull off the more gymnastic action scenes was responsible for her seeming to be so bumbling. 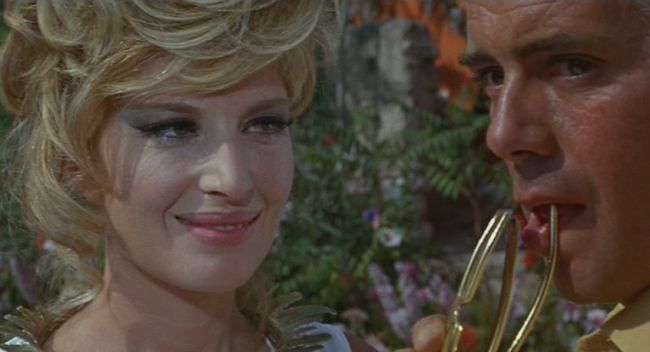 Joseph Losey, responsible for films such as Boom! and Secret Ceremony (both 1968), These Are the Damned (1963), and The Boy With the Green Hair (1948) knows how to craft a film. But imagine a film made up entirely of the slower, unfocused parts of Boom! and Secret Ceremony, with added forced wackiness and a hint of stunt casting, and you’ll have Modesty Blaise.

That’s it for the official SBBN contributions to the ‘thon! I’ll be back with a final wrap-up post on Saturday. Meanwhile, it’s not too late to get your own submissions in! Any posts I receive today will go up later this afternoon and evening.