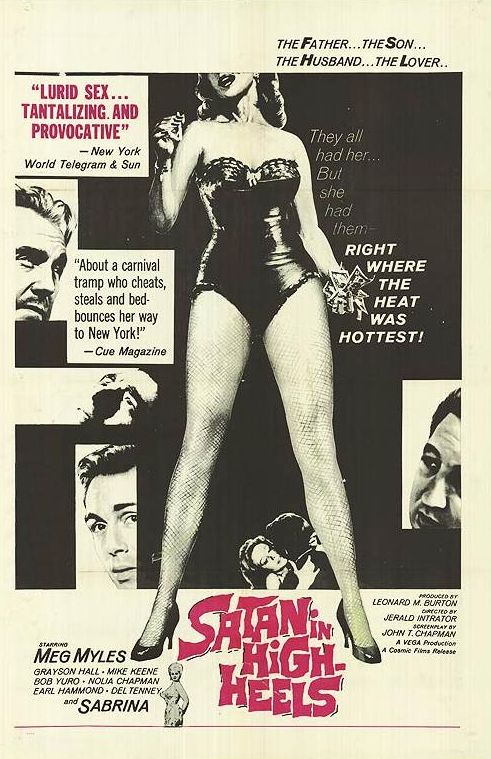 Welcome to Day Five (five!) of the Camp & Cult Blogathon! Yesterday was a bit of a slow day, but Thursdays are a difficult day to get the hang of. Don’t forget to visit all the fine participants, listed here on the main ‘thon page, and if you have a post you want to submit, please drop me a comment here, on Twitter, or in email!

For years, I have been an avid fan of The Bachelor Pad Radio Show hosted by Jason Croft and broadcasting weekly on WEFT out of Champaign, Illinois. It was through The Bachelor Pad that I first heard jazz guitarist Mundell Lowe and his orchestra, usually something from the soundtrack to the movie Satan in High Heels.

Jason Croft has said many times that it’s one of his favorite films, and of course it’s an exploitation flick I’ve heard much about over the years, but despite all that I’m a procrastinator and had not watched the movie until recently.

The entire soundtrack is delightful, pure cinematic jazz, with the beatnik coffeehouse bop of the title track and the mournful intensity of “The Lost and the Lonely” being my personal faves. “From Mundy On” is classic Bachelor Pad Radio Show fare, though I don’t think it’s played nearly as often as “The Lost and the Lonely,” which I’ve posted here so you can take a listen:

Mundell Lowe and His Orchestra: The Lost and the Lonely

It’s impossible to hear that game show orchestra opening leading into a rainy-day sax and guitar and not be compelled — driven, really — to watch Satan in High Heels. 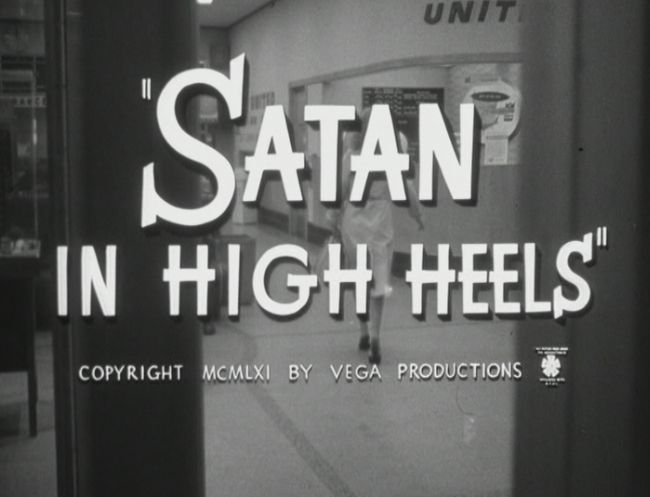 Legendary 1950s pin-up and singer Meg Myles plays Stacey Kane, a perfectly satanic name for our titular well-dressed female devil. Stacey is languishing in a two-bit carnival, decked out in a tacky bustier, giving leering men a look at her body for a couple of bucks a pop. When her junkie husband shows up, claiming to be off drugs and high on life, he waves a wad of cash at her and begs her to come back. This is a man who tried to kill her not so long ago, and one can hardly blame her for taking the $900, tossing on a trenchcoat over the stripper duds and running off to New York post haste. But then the title screen comes and up you know this woman isn’t merely seeking justifiable revenge. This woman is bad, bad news. 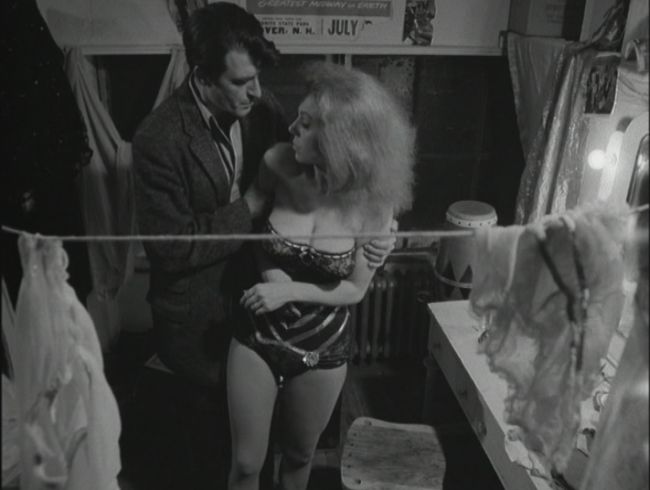 Stacey quickly hooks up with a businessman on the plane, someone who buys her new clothes and knows immediately she has the voice and the figure to make it in New York. He takes her to Pepe (pronounced “Peppy,” played by the most fabulous Grayson Hall), the proprietor of a hot nightclub. Stacey immediately clashes with nightclub manager and pianist Paul (Del Tenney, also a producer on the film). It is implied that Paul is gay, but so is Pepe, and Stacey clearly doesn’t care one whit about their sexual identity as long as she can manipulate them with her body. Pepe is pliable but Paul is not, which is why he is on the receiving end of Stacey’s physical wrath. 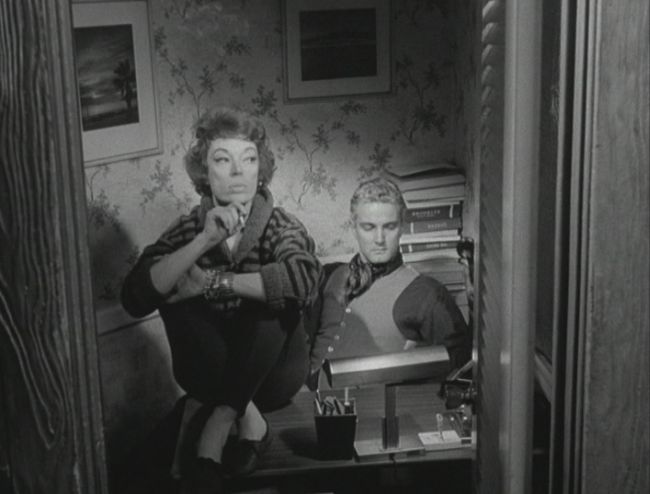 Stacey’s fists may rarely deploy but her temperament, however, is distributed to everyone without exception. Kane is a frustrating amalgam of demanding, petulant, strong and determined, happily using others to make it big in the city but also willing to put in a lot of work of her own, though must be kept in line by Pepe, who grooms and trains her for a big opening night to begin the fall season at Pepe’s.

Stacey quickly dumps the first businessman and hooks up with a second, Arnold Kenyon, a rich married man who always keeps a favored woman in a lavish apartment. His previous kept woman Felice (Nolia Chapman) has worn out her welcome; she’s 40-something and tragically in love with the selfish Arnold, and he wants to trade up for a newer, less clingy model. Stacey is more than willing to be kept, but has no plans on remaining faithful.

Enter Arnold’s troubled rich kid son Laurence (played by prolific character actor Robert Yulo). He and Stacey fall for each other, though Arnold has forbade his son from seeing her for obvious reasons. They sneak around, Laurence’s obsession growing stronger each day. Like the husband she left behind, Laurence is an unhinged mess, always on the verge of shaking apart from major emotional instability. 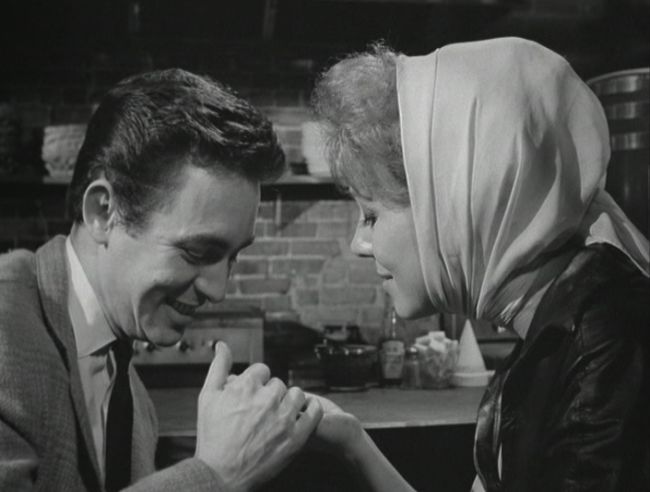 Stacey, though, wields power over almost everyone around her, and that includes Laurence, even though she is truly fond of him. Arnold keyed in to this aspect of her personality immediately and suggested to Pepe an all-leather wardrobe for Stacey’s act, as well as for her off-stage image.

And the leather wardrobe credits at the beginning of the film certainly delivered on what they promised. Meg Myles is shoved into so much leather she’s creaking like an old car seat throughout the film, the leather straining across precisely every part of her body that a sexy leather outfit is going to strain across. 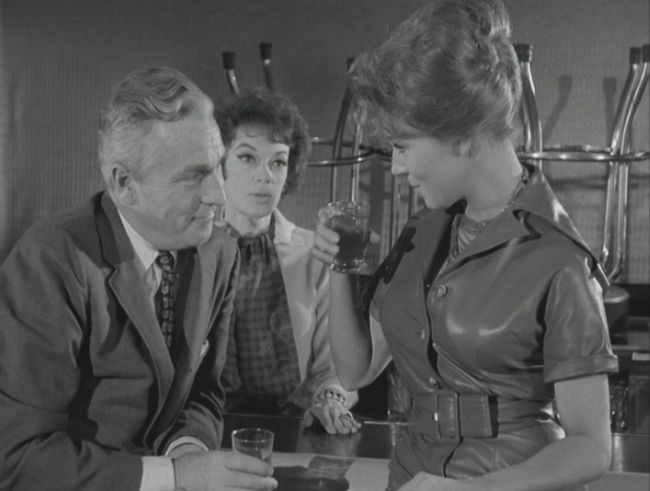 It’s notable though that Kane’s power as a woman is codified as domination, not determination or drive. And her power depends on what men are willing to give her; it’s a symbiotic psychosexual relationship, and as long a she gives them sex and possession of her, or at least the illusion of possession, she gets power… or at least the illusion of power.

Stacey and Laurence spend a romantic day together at the family lake house. When she returns, Arthur is in her apartment, distraught, realizing she does not belong to him but rather his son. He hits her, then falls to his knees, begs and pleads with her, debases himself at her feet, gives her control of his entire self. She is where she always wanted to be, what she has worked so hard to achieve: On the verge of stardom, in control of a rich man who will give her anything she desires, his young impassioned son as her true love. The trashy life of a carnival stripper is fully behind her, her junkie husband gone, his hands never on her body — or around her neck — again.

And we fade out, Arthur still at her feet, and fade in to the opening night at Pepe’s. Suddenly it is clear that the power dynamic has changed. Arthur says he’s glad they cleared the air earlier that day, and he isn’t referring to his prostration at her feet but rather the sex they had afterward. We only hear about the sex second hand, and when Pepe sees something has changed and asks if Stacey has made a big mistake, she acknowledges that she has; Pepe surely believes the mistake is that Stacey almost screwed up her sweet deal with Arthur by sleeping with his son, but we begin to sense her real mistake was allowing Arthur to sleep with her, to reclaim his power in their relationship and make her subordinate once again.

When Stacey makes her debut that night, stalks about the stage in leather pants and a riding crop, singing “The Female of the Species” which, as Chuck Darwin so famously said, “is more deadly than the male.” She is a hit, of course, the men and (most of) the women delighted by her act. She retreats to her dressing room, only to find her discarded husband laying in wait. With her riding crop and fueled by panic and fear, she beats him into a cowering blob under a table, but soon realizes she can manipulate him into getting her out of her now-powerless life with Arthur. 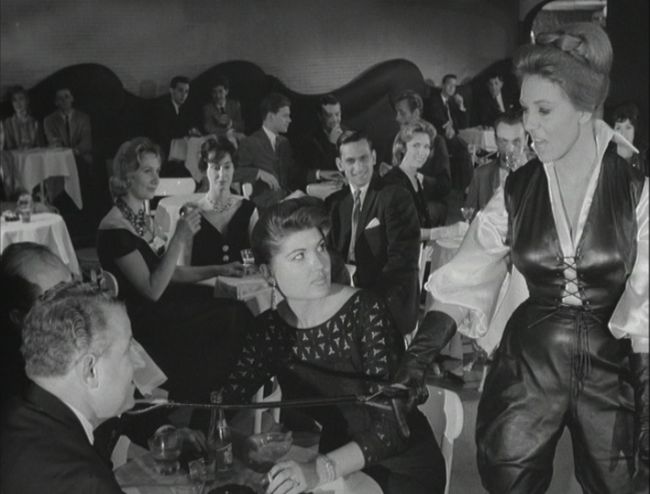 This final attempt to wrest her existence away from the men who control the world backfires, likely because it involved asking one man to destroy another for her. When the plan fails, all the men in her life appear at her dressing room door to literally gang up on her, the gaze she receives from them not the lustful, jittery gaze of the patrons but the exclusionary, withering gaze of men asserting their dominance.

One questions, of course, if the old canard that the female is deadlier than the male is even true. Felice, Arthur’s discarded former lover, shows up for the debut. There is a shot of her during the song “Female of the Species,” a tight shot that borders on the sublime. 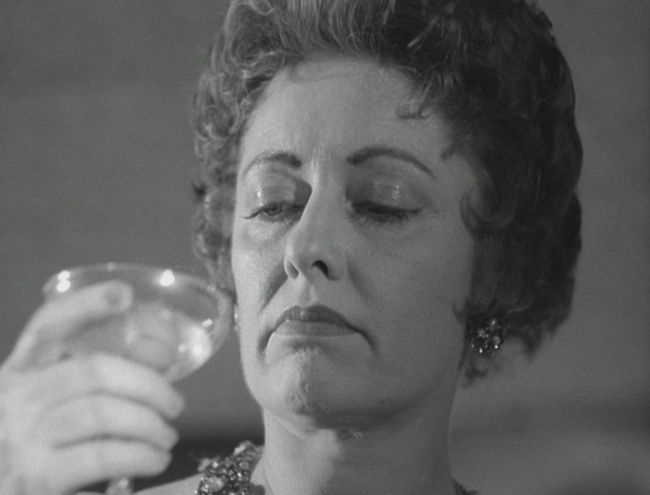 The cinematographer for Satan, Bernard Hirschenson, only a few years earlier had been cinematographer on the Oscar-winning short “Day of the Painter.” Hirschenson creates some astonishingly strong, unwavering close-ups in Satan in High Heels, views of the characters that tell us as much about them as their dialogue and bring the audience in to assume the role of the gazer, making us just like those unblinking men staring at the women who are willing to put their bodies on display.

Felice is obviously tired, soused, looking only at her drink while Stacey growl-sings that women hold all the power over men… and that’s the last we see of Felice. She’s made Arthur momentarily uncomfortable, but that’s it. It’s a complete contradiction to the notion of the female being deadlier than the male because Felice is obviously no threat to anyone at all, probably never was, especially once she fell in love with the man keeping her.

It should be noted, though, that it’s unclear if Satan in High Heels is presenting the idea of women ultimately ruling over men as ironic or not. Its intent is questionable, despite the ambiguity as to who is really evil in the Satan in High Heels universe. Stacey gets hit, almost murdered, used, lusted at. Her social standing is not her choice, though. She has to work within the parameters of the existing male-dominated society, and if that means she has to wear leather and bustiers and let herself be hit to get what she wants, that’s what she’s going to do. She knows that if you don’t work within the existing social constraints, you end up tossed out like Felice.

Yet the film may be saying she’s driving the men to violence against her. Perhaps this film was created with the idea of an exploitation flick that would explore how women ruthlessly destroy men, or at least try to, for their own selfish gains.

But I don’t think it is, and here’s why: 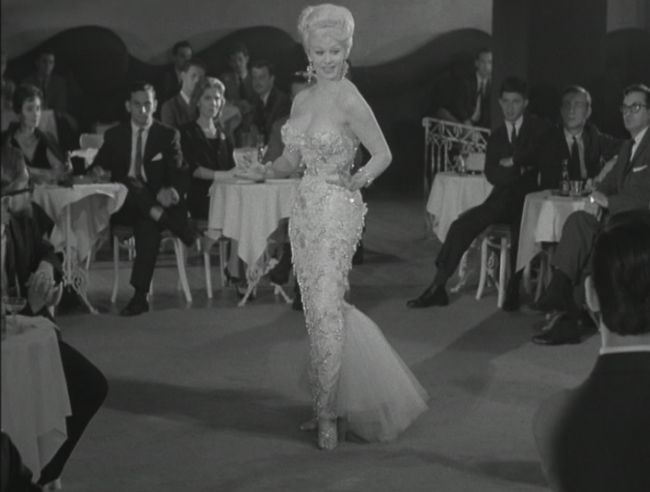 Sabrina, a well-known international model in the 1950s, portrays herself in Satan in High Heels. When Stacey first arrived at Pepe’s, they cleaned her up, changing her nasty ratty hair and trashy clothes to more glamorous fare. But Sabrina’s gown here is merely an expensive version of Stacey’s old carnival bustier, and the men who gaze at her are no different than the ones staring at Stacey at the carnival. Better dressed, sure, and with slightly less drooling, but still jittery and tense and unblinking. It’s all the same no matter how you class it up, pretty costumed tits served up for the hetero male gaze.

But maybe Stacey, too, will find a new place to go, and maybe she’s not just trotting off to find a new sucker to leech off of. Maybe she’s on her way to carve out her own life instead of merely existing in the tiny space reserved for women who briefly fulfill a sexual fantasy.