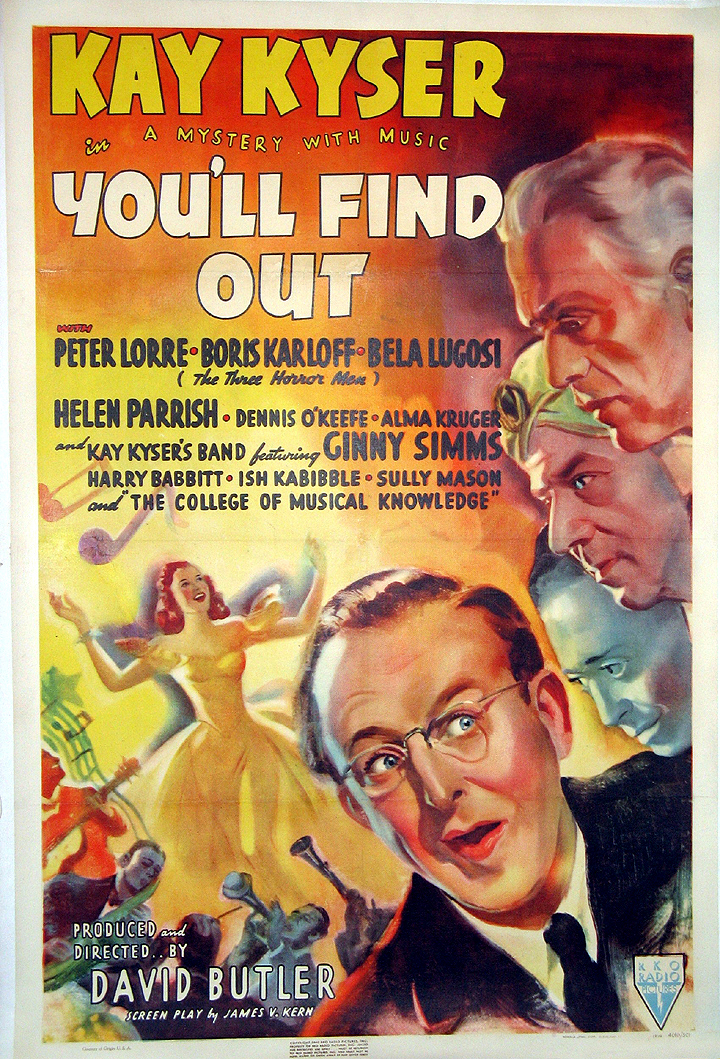 This is Day Six of the Camp & Cult Blogathon, and boy are my arms tired. Don’t forget to check out all the submissions on the main page, found at the top of this blog! They’re all terrific, and the turnout has been positively amazing. Thank you all.

Now, if you will indulge me here at the halfway point of the ‘thon, a short post for Day Six because kids, I have been watching — enduring, really — Lace for three days now, and I am verklempt.

Today’s cinematic curiosity is the 1940s never-heard-of-it flick entitled You’ll Find Out. Filmed as a vehicle for the Kay Kyser Band — yes, that’s right, it was a vehicle for an entire band — this comedic riff on the old dark house theme is surprisingly less irritating than one would believe.

And I say that despite the fact that a major player in the film is Ish Kabibble. 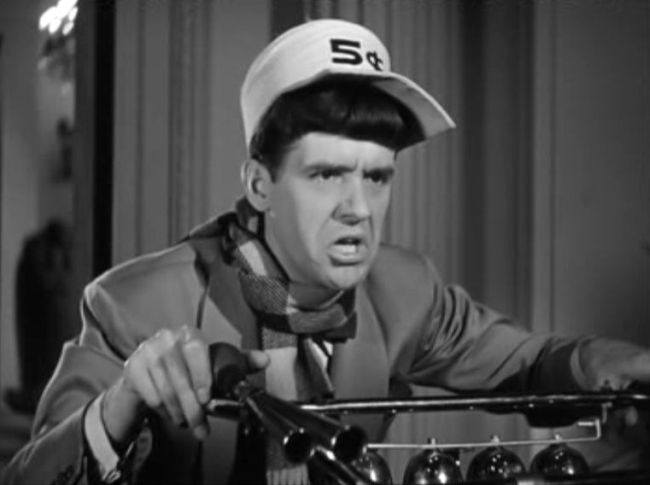 Ish as “The Bad Humor Man.”

Ish was born Merwyn Bogue and took the name “Ish Kabibble” from an early 1900s novelty song, where the Yiddish phrase “nisht gefidlt” (roughly, “I don’t care”) was bowdlerized into “ish kabibble.” Now, one would think that it was nearly impossible for someone as young as me — 39 and holding for as long as I can pull it off — to have heard of Ish before watching this film. Yet one would be forgetting that Ish was mentioned many times on “M*A*S*H,” the television show that raised me when my parents couldn’t be arsed to do so. My dad, a happenin’ hepcat of the 1940s, knew who Ish was and happily explained the joke to me. For years I wondered what kind of strange, strange person would willingly take the name Ish Kabibble… and now I know.

Even if you’re not familiar with old-time radio, you’ve probably heard Ish singing the (extremely irritating) child-like lyrics to “Three Little Fishies” which, if you will pardon the sacrilege, was done much better by The Muppets.

Kay Kyser and his band were ridiculously popular from 1939 to about 1950, primarily for their radio show “Kay Kyser’s Kollege of Musical Knowledge.” Even if you don’t think you know any of Kay Kyser’s songs, you do: “Praise the Lord and Pass the Ammunition,” “On a Slow Boat to China,” “Woody Wood-Pecker” (fnarr), “Hello Mr. Kringle,” and probably even “Like the Fellow Once Said,” performed in You’ll Find Out:

Now children, what you need to remember is that this shit was the epitome of cool in 1940. We white people just weren’t (publicly) listening to “Papa’s in Bed With His Britches On” or “The Java Jive” so we had to make do with Glen Gray and Kay Kyser and the ultra hep… uh… Sonovox.

Kyser and his band became popular thanks to the gimmick of combining a quiz show with swingin’ tunes, and in 1939 signed with NBC radio for a show that remained popular for a decade, moving to NBC television in 1949. During his heyday in the wartime years, Kyser, often with his band, starred in seven films.You’ll Find Out wasn’t the first Kay Kyser film, unsurprisingly. That honor goes to That’s Right – You’re Wrong from the previous year. The quality of this video isn’t the greatest, but this clip from the film showing Kyser and his band performing their Kollege of Musical Knowledge radio show is still worth watching:

Now, despite the fact that I’m teaching this crash course in Kyserology 101, Kay Kyser wasn’t the first reason I wanted to see You’ll Find Out. Honey, he wasn’t even in the top five reasons. You’ll Find Out is most notable nowadays for being the only film where Bela Lugosi, Peter Lorre, and Boris Karloff starred together. Billed as “The Three Horror Men” on the poster, they spend their time lurking about, doing sinister things and being possibly involved in bad doin’s at the house of an heiress. They also get to lay some serious “Are you shitting me?” looks on Kay when he gets silly-stupid. 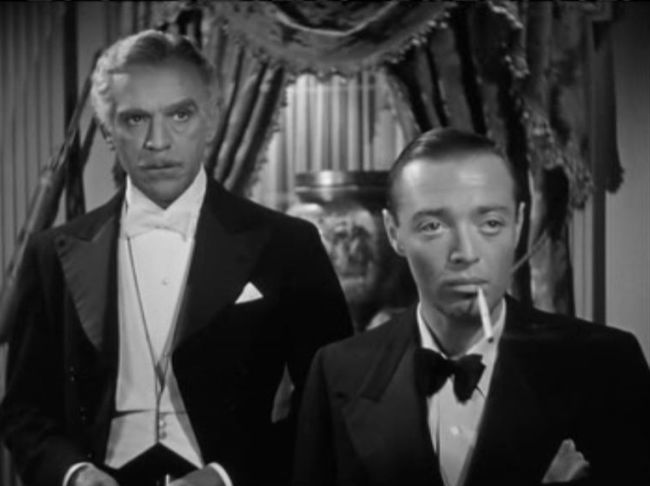 I could watch an entire movie of nothing but Karloff and Lorre droppin’ the “you are a damn idiot” look on people.

Kyser and his band were hired by an heiress to play for a party, but a storm wipes out the only bridge back to the mainland, and soon the band and a few dozen co-eds uncover a sinister plot involving murder and intrigue and weird songs about evil ice cream men. You’d think a few dozen co-eds would have better things to do, especially since their only chaperone is a dotty aunt fond of the occult, but the scriptwriters begged to differ. If you want to know more about the plot, you can’t go wrong with my BBFF Ivan’s post on the flick.  You may also want to check out the Rich-Dimick Horror Project, which accurately summarizes You’ll Find Out: “Musical horror is a hard thing to do right.”

Still, I enjoyed the fact that Bela, Boris and Peter all seemed to be having a good time, as you can tell in this screen capture where they are playing the weirdest version of Duck Duck Goose I’ve ever seen and trying not to laugh: 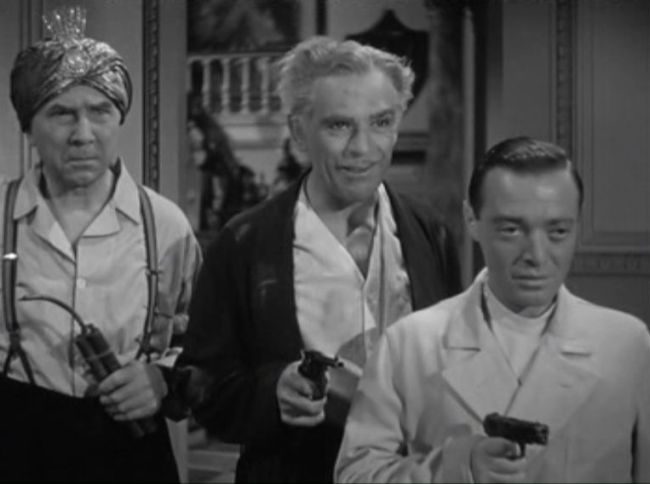 This isn’t a great film, but if it shows up on TCM again, watch it. It’s a little lengthy at 97 minutes, but we live in the super futuristic year of 2012. We have Sonovoxes and fast forward remote controls. The world is ours.