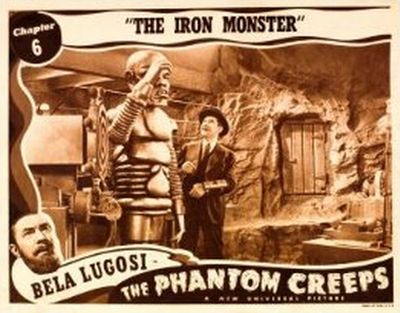 This is the final repost of The Phantom Creeps recaps from the old She Blogged By Night. The posts are the same, though I have occasionally added new photos or corrected mistakes.

Starting with the next episode, Chapter #7, the recaps will be brand spankin’ new. They won’t be posted at the rate of three a week like these reposts were, but they will be relatively frequent.

It’s been a while since we spent time with The Phantom Creeps, the 1939 movie serial and cinematic blunder brought to the screen by schlockmeister Ford Beebe and his semi-acceptable co-director Saul A. Goodkind. While I’m sure most of you memorized every word I wrote about the previous five chapters, a few of you need a little refresher course. That’s okay; nobody’s perfect. Here’s what’s gone down in Creepville so far:

Dr. Zorka (Bela Lugosi), bearded evil scientist, has possession of a really neat meteorite that does all sorts of cool x-ray spex types of things. Whatever the plot demands, the meteorite delivers! Dr. Mallory (Edwin Stanley), former partner to Dr. Zorka, snitches to the Feds about Zorka’s plan to sell evil meteorite-based technology to an unspecified foreign enemy. Zorka fakes his own death to escape the Feds, and becomes a non-bearded evil scientist who stays really super-duper hidden in the basement of his own home, where both spies and Federales come looking for him every five minutes or so. Zorka is assisted by his unbearably awful assistant Monk (Jack C. Smith). Every episode, Monk freaks out and thinks he’s going to get sent back to Alky-traz, so he attempts to betray Zorka, fumbles it, and Zorka half kills him with one of those wacky inventions. Then he decides nah, Monk’s a cool guy, just a little misunderstood, all is forgiven. 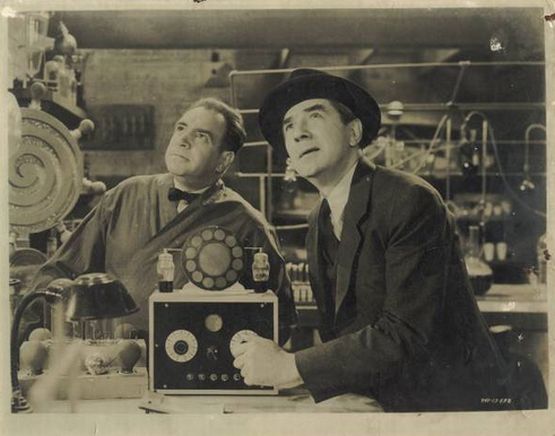 The Feds want to find that meteorite, so G-Man Bob West (Robert Kent) and his able partner Jim Daly (Regis Toomey) are hot on the trail of the meteorite, accompanied by dull-eyed chronic mumbler and plucky girl reporter Jean Drew, played in knockoff haute couture and thick false eyelashes by nightclub chanteuse Dorothy Arnold. A spy ring of accidental hipsters in fake moustaches and goggles is also after the meteorite. Possession of this magical space rock of joy is constantly rotating between the G-Men, the spies, and an invisible Zorka sneaking around and making chumps of them all. Every single Fed and spy thinks Zorka is dead, you see, even those who have actually, physically, undeniably seen him since his “death.” 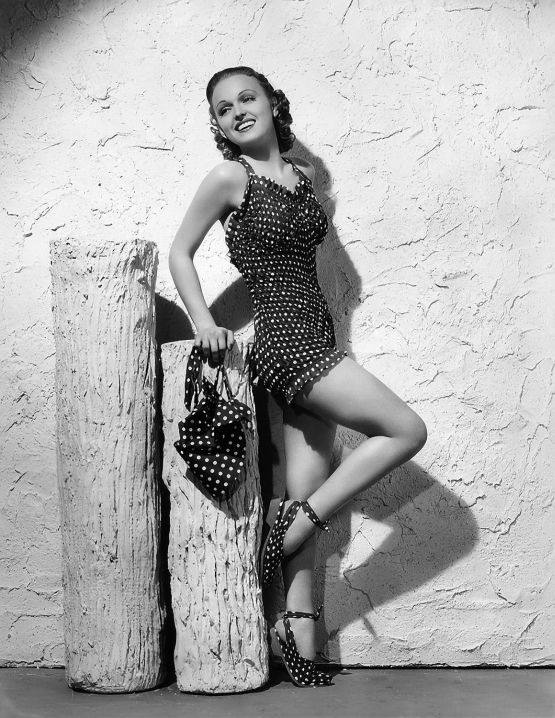 What you need to know here is that everyone is a damn idiot. G-Man Bob is constantly telling his men to not bother chasing after the bad guys, the spies are constantly losing the meteorite, Zorka’s exploding fake spider contraption (the Little Gem ArachnoBlam Mechanism) is nearly worthless, etc. It’s incompetence on parade, and it is hilarious. Zorka is the only non-moron in the group, but he’s got a little problem with impulse control that’s highly entertaining but slightly detrimental to his plans for world domination.

Also, Regis Toomey can’t be fucking killed. He’s been in plane crashes, blown up, smooshed by a collapsing antenna tower, kidnapped, jostled, ArachnoBlammed, burned down, pushed over, and sunken into swamps, and he is still alive. It’s frightening and, frankly, a little arousing at this point.

Don’t you judge me! 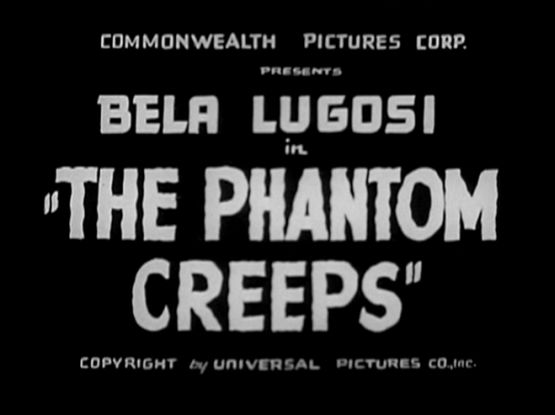 In our last episode, Dr. Mallory was kidnapped by the spy ring and forced to work on the meteorite for the brief moment that they possessed it. Between Dr. Mallory being a colossal dick and Dr. Zorka once again making himself invisible and unleashing some ArachnoBlams, we lost the only character we ever truly cared about: Doorknob Man, the kindly old man who lived in the abandoned Acme Storage Unit building and who obviously spent his days screwing doorknobs to the walls. It may have been a bit part, but Doorknob Man touched all our souls.

Dr. Mallory was rescued by G-Man Bob, the spies gave chase, and Bob decided the best way to get them off his tail was to drive straight into a speeding train. The car was obliterated in the cliffhanger of the last chapter, but do not fret because Bob was thrown free!

After five minutes of recap and introduction — a full fourth of this episode was spent on recap and intro, plus several more minutes filled out with stock footage — we see Bob creamed by the train again. He’s thrown several yards from the car. Once again, a second car full of his associates arrives moments later and begin to investigate, puzzled at the obvious lack of a Bob-shaped corpse inside the destroyed car.

Bob is found by a perpetually-confused fellow Fed (Eddie Acuff), just in time for the super pissed off engineer of the train to arrive and chew Bob out. The Feds bitch back, saying Bob should be left alone because he’s a G-Man. “Oh, that’s fine, sir!” responds the engineer, because carelessly threatening the lives of dozens of innocent civilians in a stupid stunt is both patriotic and really fucking smart. 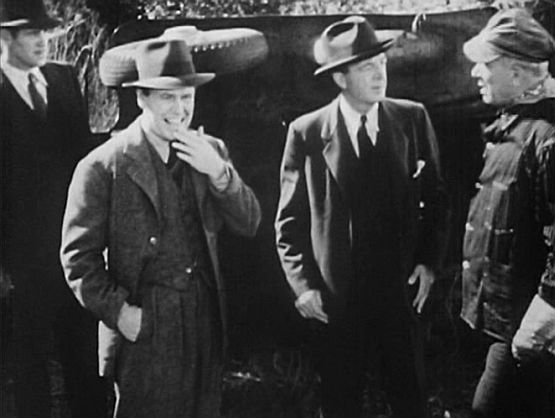 “I could bust his skull with a rock and throw his lifeless corpse back into the car, and no one would ever know…”

The spy goons return to Acme and find poor, dead Doorknob Man, who actually may not be completely dead but rather affected by the coma-tizing powers of an ArachnoBlam, but who knows at this point. They fret about the missing meteorite when Plucky Girl Reporter arrives, so they hide behind a door and let her discover dead Doorknob Man, which doesn’t faze her a bit. 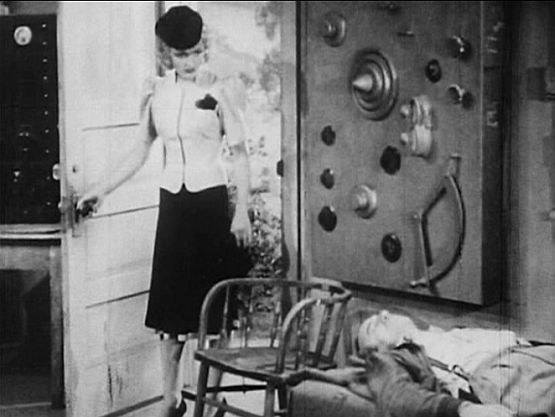 “Oh sure, I’m stuck wandering around looking for shit to do and you get killed by a fuzzy exploding spider! Why doesn’t anything exciting ever happen to me?”

She claims she’s trying to find the meteorite herself, which would have been a pretty solid plot development had it been true instead of PGR simply throwing out lies to spice up her meaningless existence.

Meanwhile, G-Man Bob and Dr. Mallory puzzle over how the meteorite could have disappeared right in front of everyone. Mallory insists there is no way in or out except for the front door, which he was standing near the whole time, and no one came in. Well, except when the door opened fully and InvisiZorka came in and explodiated something just a few feet away, which somehow you didn’t notice at all. You screwed up, man. You lost the damn meteorite! We all know it was your fault, you lying bastard, so stop being a child and cop to it.

Mallory’s assistant Perkins (silent film star Hugh Huntley) suggests that maybe Zorka took the meteorite. Instead of positing that Zorka was not really dead and somehow sneaked in through the front door while Mallory wasn’t paying any attention — which is, you know, exactly what happened — Perkins suggests that Zorka was so evil his spirit returned from the dead to torment them all. Uh… yeah, thanks for that, Perkins. Can you go out and pick up some celebratory snacks while we talk about how that’s a completely plausible theory?

Idiotic though it is, Perkins’ suggestion is enough to cause Bob’s and Mallory’s brains to engage and, their little brain cells chugging away, they conclude Zorka faked his own death.

Mallory assumes that Zorka must have some means of going invisible (and didn’t just sneak in while you were scratching your ass and daydreaming about Hostess Fruit Pies, right, Mallory?) Despite not knowing if Zorka can make himself invisible or not, despite not having seen the device or knowing the first thing about how it operates, Mallory stays behind to work on a de-invisiblator. Because science works exactly like that. 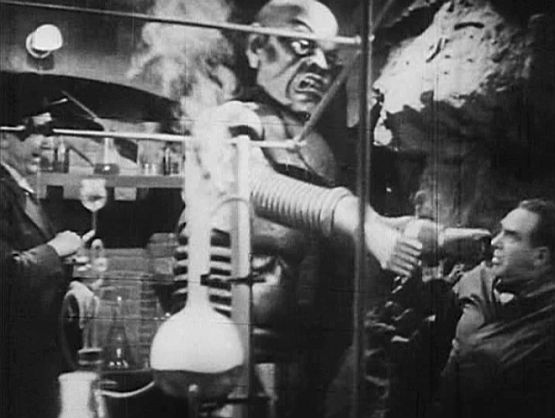 Reeg heads off to Acme, and G-Man Bob goes back to Zorka’s house. For whatever reason, Toomey parks about a half mile away from the Acme Storage Unit building and wanders through the brush of the empty lot next door. He arrives just in time to see the spies and PGR leaving. Toomey is pretty cranky by now and so assumes PGR is up to no good despite having seen her do nothing but walk down three concrete steps. Instead of hauling her in to the Federal offices, he takes her to Zorka’s mansion to see Bob, who is combing the place with a neometer in an attempt to detect the meteorite somewhere in the house.

Now here is where G-Man Bob’s years of training and finely-honed investigative skills come into play: The neometer detects the meteorite, so he follows the trail throughout the house. Zorka, hidden snugly in the basement where no one has yet bothered to look for him (incompetent, remember?), puts the meteorite in a secret safe behind a brick wall. Suddenly, the meteorite cannot be detected… so Bob immediately gives up looking for it.

Genius. Fucking genius, Bob. Don’t try to find out why the meteorite is suddenly undetectable or anything, just shrug and randomly walk around. That’s a good plan.

Instant karma as punishment for heroic stupidity comes in the form of The Iron Man, who has learned how to duck through the doorway. Yeah Iron Man! He’s the only character in this series who is not too dumb to learn. Bob tries to shoot Iron Man but bullets cannot stop the metallic giant! Iron Man rassles with Bob for a bit then gives him a big ol’ man hug, the kind that causes embarrassing, traumatic internal injuries. Will Bob survive?! 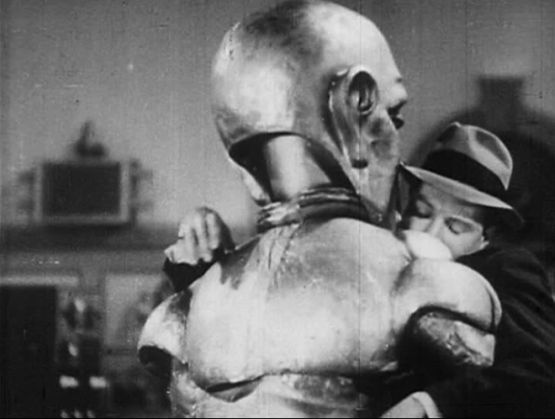 Probably. We’re only halfway through this fershlugginer thing and Bob is, ostensibly, the star.