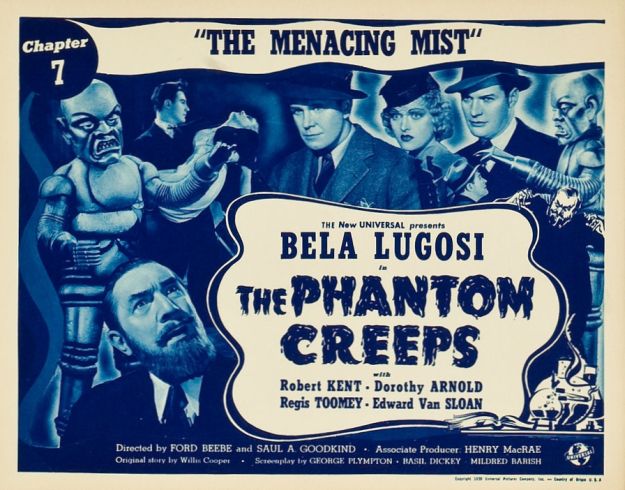 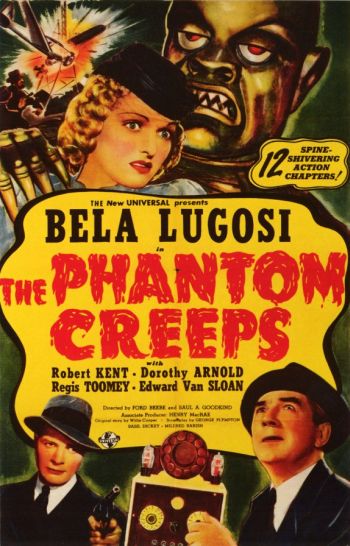 Our story so far: Formerly bearded mad scientist Dr. Zorka (Bela Lugosi) has a lot of super spiff inventions that he wants to sell to unspecified enemies of the United States. His former scientific partner Dr. Mallory  (Edwin Stanley) discovered this and narked on him to the FBI, causing G-Men Bob West (Robert Kent) and his suspiciously able sidekick Jim Daly (Regis Toomey) to pursue the mad scientist. Zorka outwits them (not hard) by faking his death and using his belt of invisibility; when he is invisible, he calls himself The Phantom, sorta, when he remembers to do so, which isn’t as often as one would expect given the title of this serial.

The title The Phantom Creeps, by the way, is supposed to mean Dr. Zorka Creeps Around While Invisible, not There Are Creeps Who Are Also Phantoms In This Serial.  I tell you this because it took me two full viewings to comprehend the title; I didn’t read “creeps” as a verb, I read it as a noun, and I suspect some of you did, too.

Meanwhile, spies working for a different set of unspecified enemies of the United States want to steal Zorka’s inventions, primarily by obtaining a meteorite Zorka used to create all of his neat toys. Plucky girl reporter Jean Drew (Dorothy Arnold) smells a hot story and follows the FBI and/or spies around to uncover the news, irritating pretty much everyone ’cause dames are nothin’ but trouble.

Here in Chapter 7, the FBI has, thanks to Dr. Mallory’s assistant, finally begun to realize Zorka might have faked his death. To this end, G-Man Bob heads back to Dr. Zorka’s allegedly abandoned palatial estate to uncover clues. Dr. Z, in hiding in the basement of his own home where neither highly-trained FBI agents nor experienced spies have bothered to look, sends out the Iron Man to crush the shit out of G-Man Bob. However, the robot — charmingly pronounced ROW-butt by everyone in this film — is called back by Dr. Z before he can finish the job. 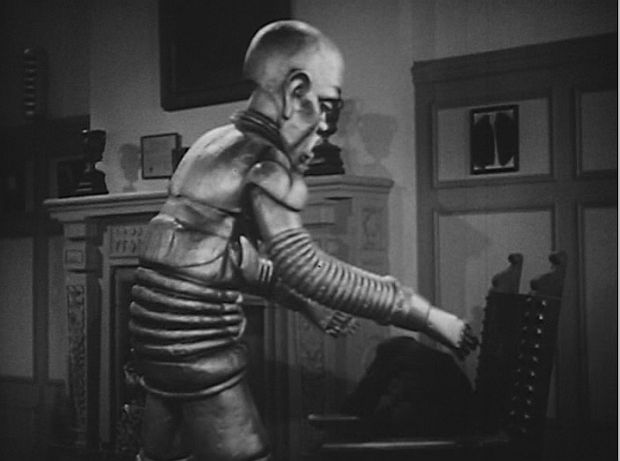 Iron Man proves chivalry is not dead by placing G-Man Bob’s unconscious body gently into a chair before wandering off into his closet.

While all this is going on, Zorka’s sidekick Monk tries to kill him again. Monk is an escaped felon on the lam, safe for now because Dr. Z has allegedly changed his appearance, but the price Monk pays for his safety is being kept as basically a slave by Zorka. How he is prevented from running off during the many, many, manymany times he is left unsupervised is never fully explained because… well, because this is The Phantom Creeps. The end result of this abject silliness is that Monk freaks out every week and betrays or tries to murder Zorka, fearful that he will be caught by the G-Men and be sent back to Alky-traz.

In the first few episodes, Monk’s panic always gave us the best part of the chapter: The weekly Monk menacing. Iron Man would be deployed to wave his freaky-ass arms at Monk while Zorka cackled in glee, then at the last minute would decide Monk was harmless, put Iron Man away, and the episode would continue on as though nothing had happened.

During this week’s Monk menacing, I noticed something disturbing: Doorknob Man’s collection of knobs is now in Zorka’s basement! 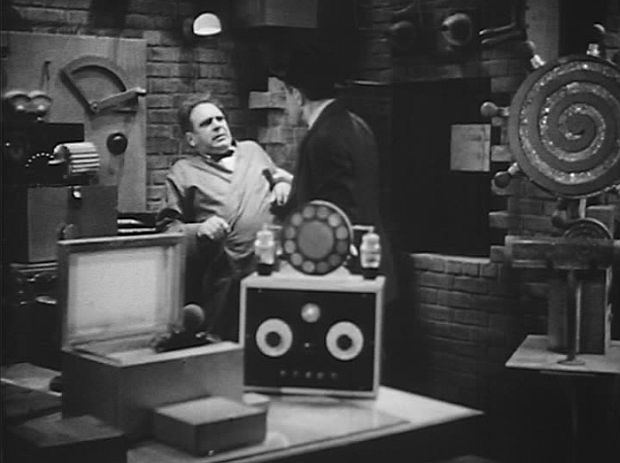 It’s to the left of Monk, placed upside down so the lever mechanism is on top, but you can still see the doorknobs around it. Compare with the panel Doorknob Man was sleeping in front of a couple of episodes ago. You might think this is the product of poor continuity and the inability to keep track of props, but not so. Clearly, Dr. Zorka has stolen a dead man’s property! Probably rifled through the guy’s pockets, too. What a mean thing to do.

Realizing at some point between chapters six and seven that using the Iron Man for the Monk menacing had become repetitive, the writers changed things up and had Monk go completely fucko bazoo and steal Zorka’s Invisiblator in a mad attempt to escape. He gets the first part right, fading out of sight and running away, but shmutzes it up by turning off the invisibility almost immediately, thus learning the valuable lesson that being invisible only works if you remain invisible until you are out of peril. 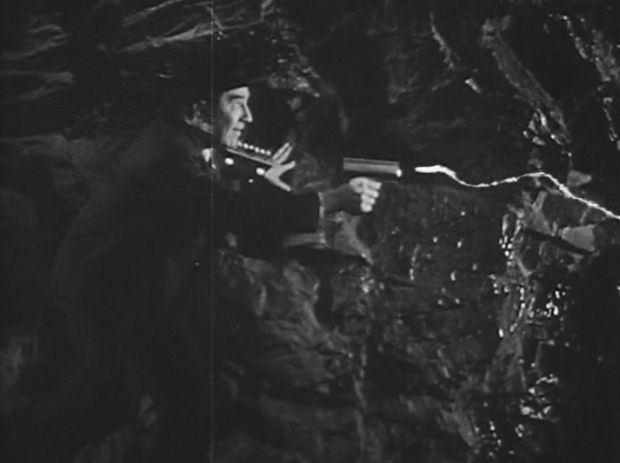 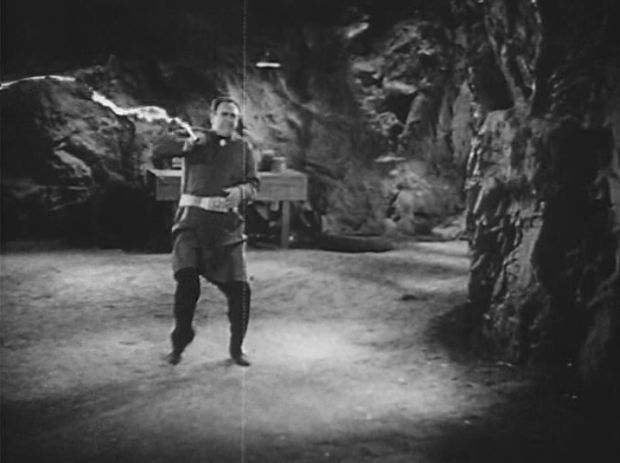 It’s a hard life being dangerously stupid around a boss who owns a lightning gun.

After being laughed at by Zorka, Monk gathers up what’s left of his pride and helps the mad doctor move to a new office, conveniently located in the same lovely art deco Bradley Building that houses the fake International School of Languages front for the spies. We learn today that the Bradley is also near the government headquarters. They’re all neighbors! How friendly, and not at all a stupid coincidence written into the script just to make location scouting easier. 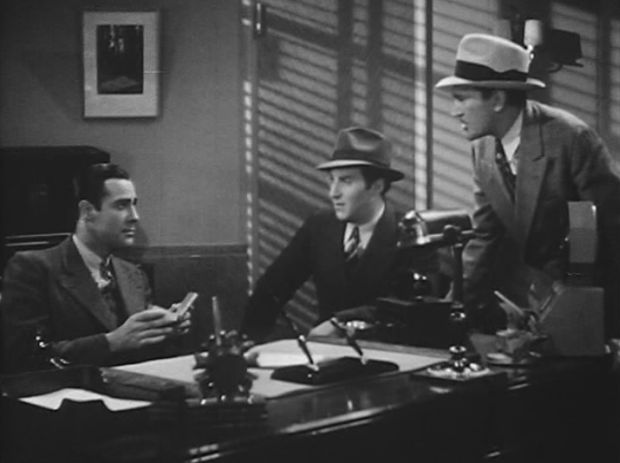 Allow me to introduce you to actor Anthony Averill, seen here on the left as Rankin, lead henchman for the spies. In this chapter, Rankin appears to have been promoted, working behind a desk and featuring prominently in the story itself. Averill had a very short career with few notable roles; most people know him as the guy in The Phantom Creeps who looks like George Clooney.

Averill was only active in films for two years, playing gangsters or henchman almost exclusively. He is, somewhat ironically, one of the best actors in this serial. He has a natural ability in front of the camera and manages to say his lines without sounding like he’s rolling his eyes. It’s strange and even a little sad that there is almost no information on him to be had. He appears in cast lists in books about other bigger-name actors, and there is one whole publicity photo of him online, but nothing more. 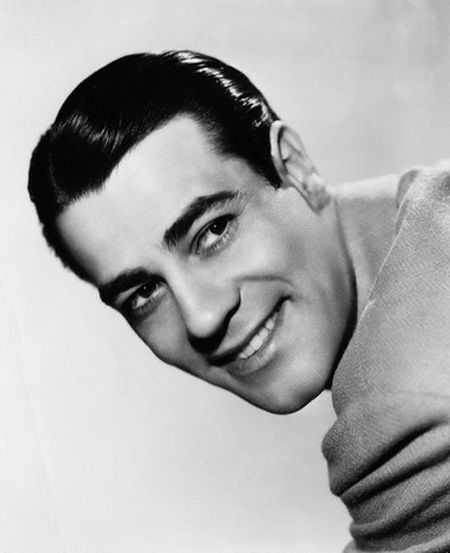 Averill’s extended role, along with more humor and focus on the characters’ personalities, signals a clear change in production and writing here at the halfway point of the serial. Averill was definitely underused in the earlier episodes, and someone must have realized this and increased his presence, to good effect.

The henchmen gather in their spy offices with a neometer, the device used to detect the location of Dr. Z’s meteor. How did the spies get a neometer? Because Dr. Mallory lost it. The man has lost everything during this serial: The meteor, the neometer, Doorknob Man, and now, finally, our respect.

The neometer beeping away as the new tenants move in, Rankin orders henchmen to investigate to find out who it is and why they have the meteor. Despite knowing only the Feds or Dr. Zorka and his assistant could possibly know about the meteor, and despite using fake moustaches themselves in every episode, they don’t recognize Monk at first because he’s in a moustache. You think that proves they’re idiots; I think that proves that a faux ‘stache is an impenetrable disguise. 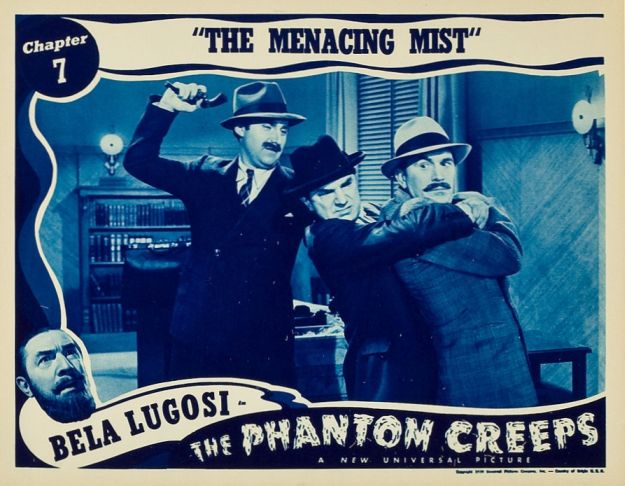 The spies finally figure it out and easily overpower Monk, but Dr. Zorka kicks their asses for a few minutes — and that’s Bela doing the ass-kicking, too, not a stunt double. Every episode has one good moment, and I think chapter seven has just had two: Monk getting zarked for mind-boggling stupidity and Bela Lugosi kicking spy ass.

Yet the spies get the meteor, which has at this point been passed around more than a desirable object amongst several people who very much wish to possess it. G-Man Bob, Regis and Plucky Girl Reporter show up at the Bradley Building, and PGR assures G-Man Bob that she can help investigate: 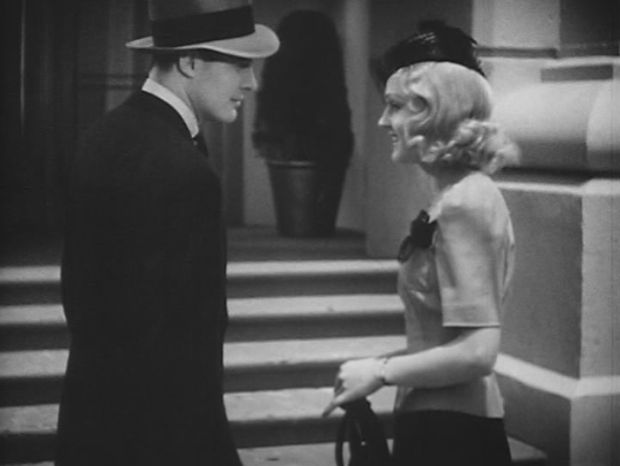 “My editor hired me because I am fast!” PGR tells G-Man Bob.  I present this dialogue to you without further comment.

The spies saunter out with the meteor in its hermetically sealed safety container, i.e. a nasty, broken doctor’s bag likely still infected with the Plague of Justinian. PGR sees them and overhears mention of “dynamite” which they are taking to the pier. 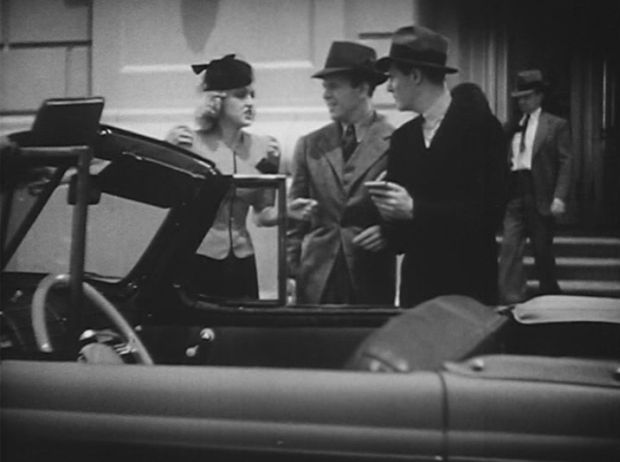 Finally showing some life, surely because she is ecstatic to hear that shit might blow up at any moment, she rushes back to G-Man Bob and Regis to report the exciting news. Regis, not getting the point, snaps, “So what? I hope they throw all the dynamite off the pier!”

Three great moments in this episode. Folks, we have a new record.

The spies take the meteor to a yacht hired by the lead spy, a guy who I’m sure has a name but looks so much like an incidental Mel Brooks character that I just call him “Gov.” In response to the yacht development, Bob gets into another plane. Robert Kent’s contract must have specified he end each episode in an airplane, though the writers, with their genetic predispositions to be both surly and contractually accurate at the same time, have made sure G-Man Bob has obliterated every single plane he has touched. 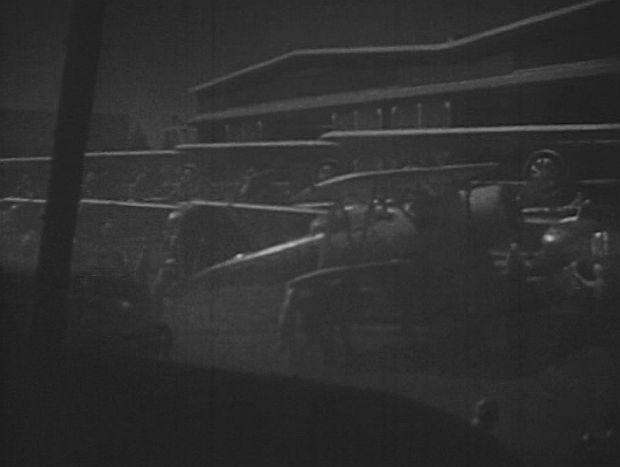 Bob apparently requisitioned a six-pack of planes from the FBI office supplies closet before he began this mission.

Bob flies overhead, in the dark and during a dense fog — that titular “menacing mist” — but somehow everyone can see well enough to shoot at each other a bit before the spies on the yacht shoot Bob down. Instead of the hardened earth or electricity poles, this time he crashes into a pier, which is more of the same-ol’ same-ol’, but at least they show us the crash instead of leaving it at a cliffhanger. Bob getting into a plane leads inevitably to the plane crashing; it is a foregone conclusion, and there is no use pretending otherwise.

G-Man Bob won’t die in the crash and no one else appears to be in any real danger at this point, so there’s nothing left to tempt you back for next week’s exciting installment… unless you dig on stock footage, improbable plots and low-rent character actors floating about in the San Francisco Bay, that is.