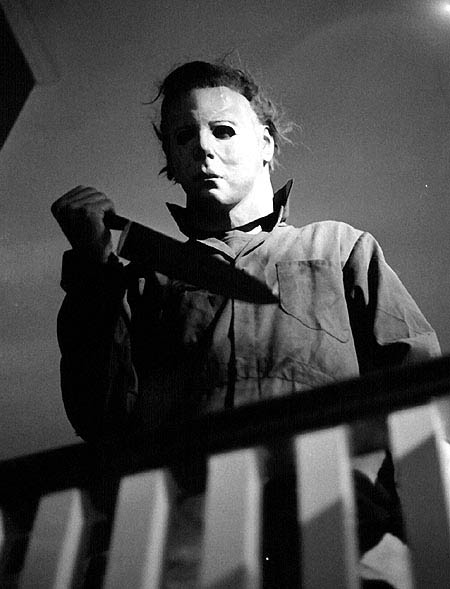 William Shatner as Captain Kirk as Michael Myers in Halloween (1978).

It’s one of the most iconic props in modern horror movie history, but what was it, anyway, and where is it now?

The first mask used for the character of Michael Myers in the now-classic John Carpenter flick Halloween (1978) was a store-bought Captain Kirk mask, made by Don Post Studios (DPS). DPS had created what are called “life casts” of various actors during production of The Devil’s Rain (1975), and these molds made of the actor’s faces were then used for facial prostheses during the melting scenes. In my old Shatnerthon post linked above, you can see Ernest Borgnine in a goat mask made from what must have been a life cast, and Ida Lupino in an eyeless mask using the same process. 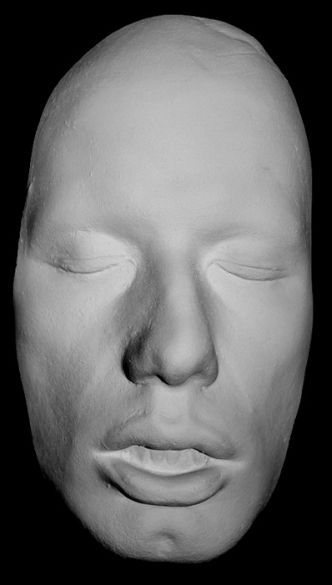 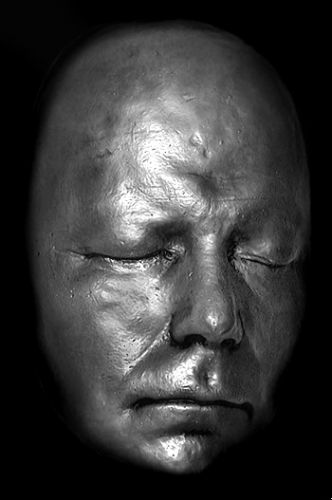 To the left, a replica of the Devil’s Rain life cast for John Travolta. To the right, a replica of William Shatner’s, the face that went on to become Michael Myers.

Many, myself included, have thought Shatner was wearing a full mask during some scenes of The Devil’s Rain, and that exact mask was later used in Halloween. That’s not the case; in Devil’s Rain, he was only wearing a facial piece or pieces, not a full mask. The reason there is a striking similarity between the Devil’s Rain facial prostheses and the Captain Kirk mask used in Halloween is because both were made by Don Post Studios, and both made from the above life cast of William Shatner. The year after Devil’s Rain, DPS produced an entire series of “Star Trek” masks, sold in stores during the mid and late 1970s. The masks used in Halloween were the store-bought versions, chosen after considering another Don Post Studios creation: an Emmett Kelly sad clown mask. Can you imagine the nightmares? 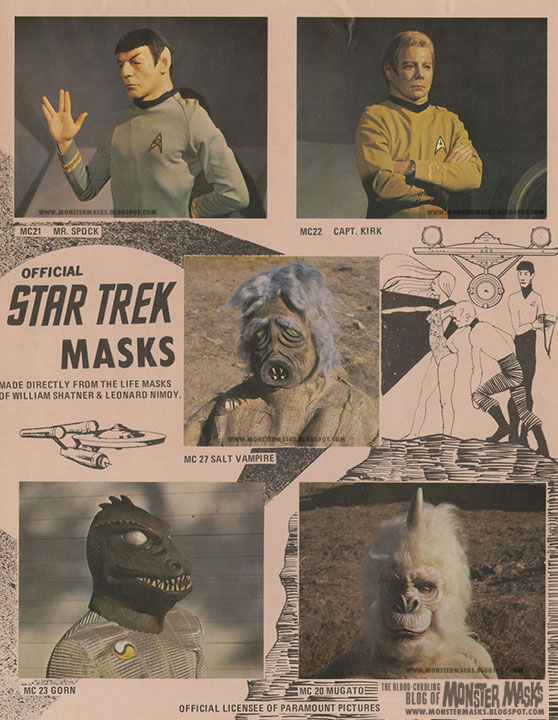 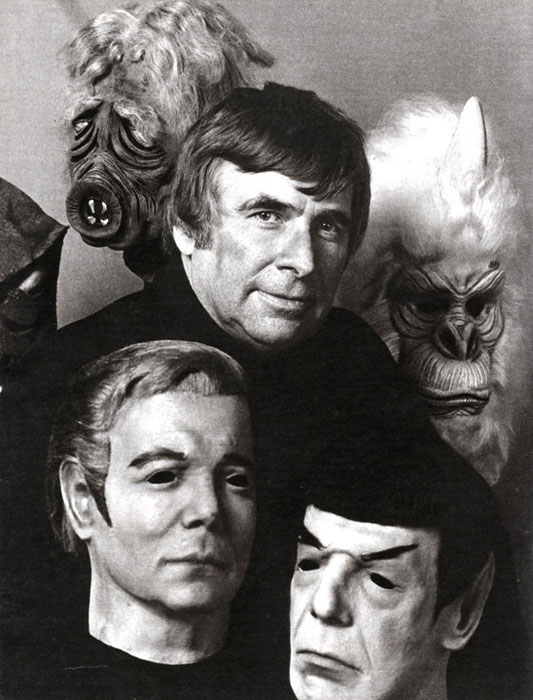 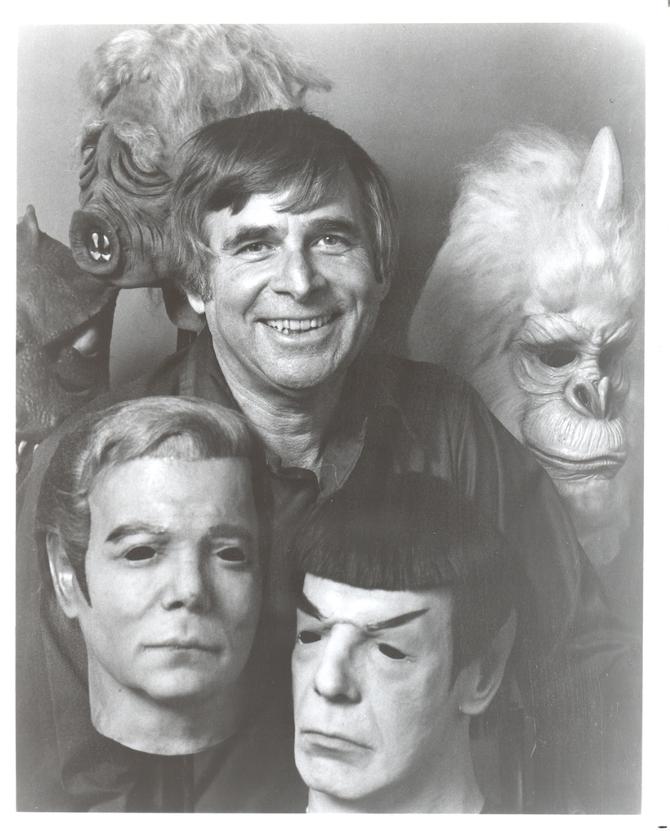 Gene Roddenberry in promotional photos with the “Star Trek” masks. (Via and via.)

An unidentified photo of the Kirk and Spock masks from the 1970s. I found this unlabeled, with no indication how old the photo is, or where it’s from, but it’s got some great detail. The Spock mask was also made from a life cast.

There were at least three Kirk masks bought for Halloween, one for filming and two for stunts, all modified by enlarging the eye holes, getting rid of the space sideburns (they’re triangular! just like space!) and painting the faces white. 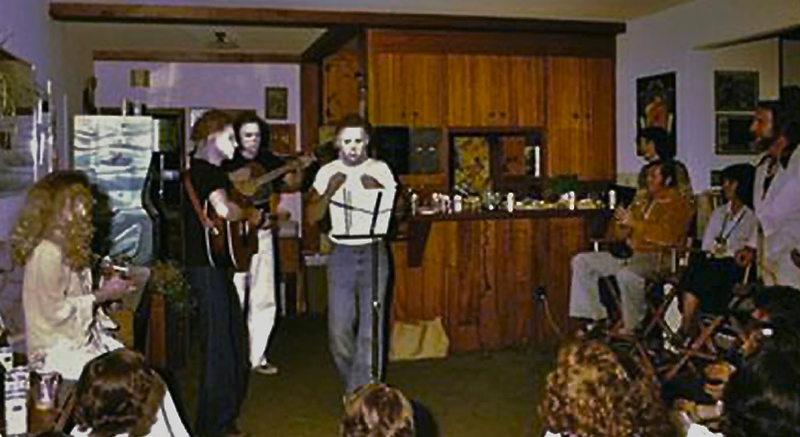 Above are three cast members in a band apparently called The Coupe DeVilles playing at the wrap party for Halloween. (via) It’s this picture that confirms there were three masks, not just two, though there are always rumors that there were more, now in the hands of secret collectors.

Below is a pic that is said to be of two members of The Coupe DeVilles, John Carpenter, Halloween director, and Nick Castle, stuntman and actor who played Michael in the original film. This picture was also taken at the wrap party; however, they’re not wearing the same clothes as anyone in the wrap party band picture above, so it’s equivocal whether they were really Coupe DeVilles members or not. (Via.) If I understand correctly, the mask on the right was worn by a stuntman, and the one on the left was probably worn by Castle during filming:

Nick Castle in a series of behind-the-scenes photos: 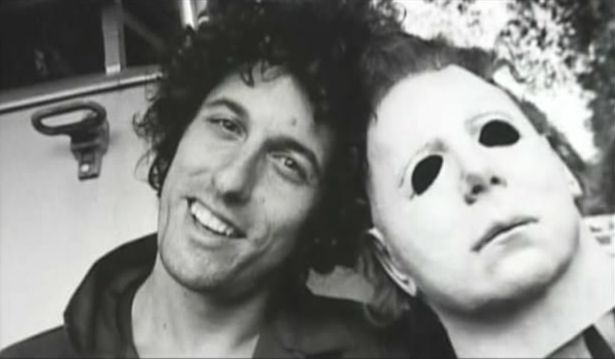 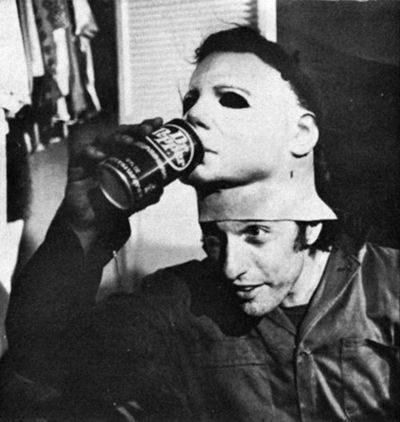 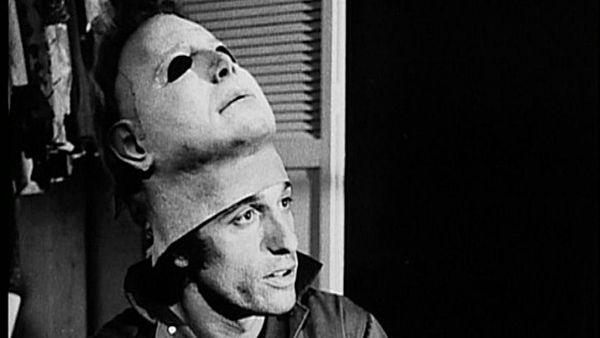 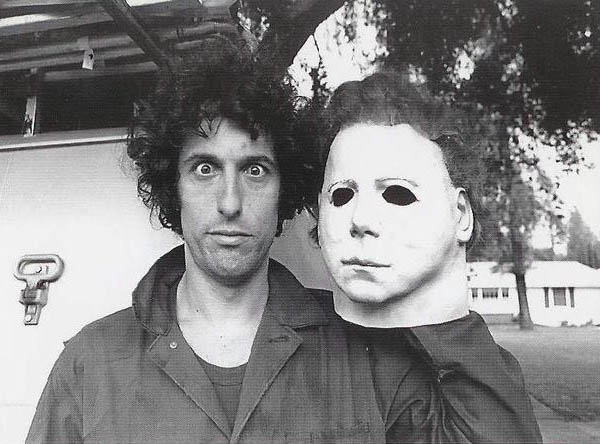 The same masks were used in Halloween II, where Myers was played by Dick Warlock: 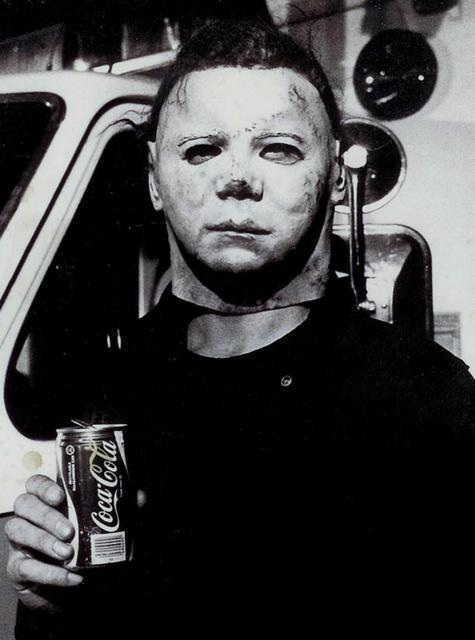 Photo courtesy Anatomy of the Halloween II Mask. Though a lot of people think the H2 mask was not the same as the original Halloween mask, they definitely are — you can see the same facial landmarks on the two masks in this comparison photo.

Debra Hill, producer on Halloween, had — depending on who you talk to — either kept one mask in a box under her bed and brought it in for use for the sequel, or had all three masks. The two stunt masks were apparently burned during scenes for the finale of Halloween II. The only one that still exists, officially, is the one worn by Castle and Warlock and seen on screen in Halloweens I and II.

After filming of H2, Dick Warlock took the mask and other Michael Myers props home. Here is a short video comprised of segments from a 2001 interview with Warlock, showing the mask up close.

Warlock with this mask can also be seen here at From Midnight, With Love, in a terrific post that has photos of all the actors who played Myers over the years, posing with their respective masks. The original Michael Myers mask was never used on film again after H2.

If you’re like me, and of course you are, you’re wondering where the mask is now. After owning and displaying it for years, Dick Warlock sold it to a collector who (I think) displays it in a haunted house in Ohio. This is apparently the “last known picture” of the original mask, with Warlock and its new owner, who doesn’t allow photos to be taken of the mask anymore: 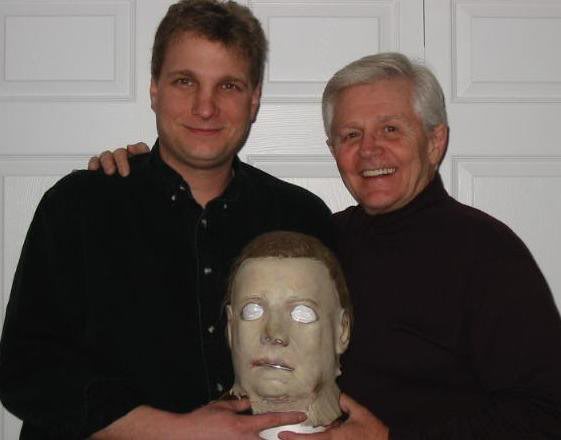 Meanwhile, the original mold used by DPS was either stolen or misplaced, who knows. The studio has since made replicas based on similar molds, as have other companies who have purchased molds used for subsequent Halloween films. Collectors spend hundreds or even thousands on various DPS masks, the original molds, and the originals from the films if they can be found. Original 1975-era Kirk masks go for a pretty penny and are quite rare, apparently because the latex simply doesn’t age well, and also because many of the masks were cut up to look like the Michael Myers mask and didn’t survive after the modification. Here’s a great thread on The Official Halloween Message Board from someone who purchased an original 1975 Kirk mask a few years ago. You can see how the latex has degraded over the years, and how much the conversion of the mask to look like the Halloween one made it difficult to preserve. For most of these masks, this conversion was done by original owners back in the 1970s and 1980s.

The collecting of these masks is confusing and expensive and I can’t tell you anything of substance about it, but this thread at MichaelMyers.net has a lot of great info on the masks used in the original movie and sequels. I can tell you that things get kind of sticky with Halloween IV, when Don Post Studios didn’t make the masks for the sequel, yet a Shatner-esque mask was still seen on screen, in a possible violation of both copyright and ethics.

It’s a strange history for such an iconic film prop. One would assume it had been well preserved, in storage, and easy to locate for research if not viewing. One would, of course, assume wrong. Hopefully the mask has been preserved and will see the light of day sometime soon.

The photos used in this post are found all over the web at different sites; I tried to find the best quality pics to put them in one location, and I have credited all sources for the photos, which are linked in the captions below them. Also note that there’s conflicting information about the masks and, as with all collector’s items, outright lies and misdirection to be had, plus I’m no expert, so I’m bound to get some of this wrong. Feel free to correct any mistakes you see!