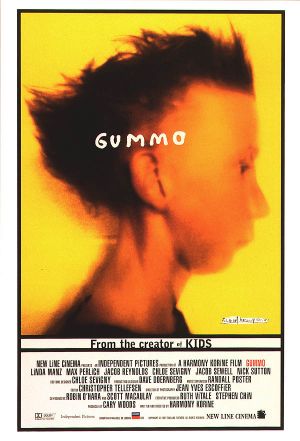 Gummo (1997) is a difficult film that too often feels outrageous for the sake of outrageousness, though fans of the film seem to love it for just that reason. Personally, I’ve never been able to fully accept artistic expression that exploits people in order to show that sometimes our society exploits people. It’s impossible for me to reconcile the hypocrisy in that specific kind of artistic statement, though at the same time I don’t question those who have no moral qualms about it. At the end of the day, Gummo is the quintessential “your mileage may vary” film.

Gummo is a series of loosely-connected episodes in the lives of poor families in a Xenia, Ohio that never recovered from the devastating tornadoes of 1974; this is a film that cannot be accused of having a plot. The film was shot entirely in Nashville, and features only a few professional actors, the rest of the cast mostly Nashville locals and friends of director Harmony Korine. Tummler (Nick Sutton) and Solomon (Jacob Reynolds) are the two young stars, such as they are, with supporting stories featuring three sisters (Chloe Sevigny, Clarissa Glucksman, and Ellen Smith), plus arguably the film’s most famous character, Bunny Boy (Jacob Sewell), who undeniably influenced 2001’s Donnie Darko. 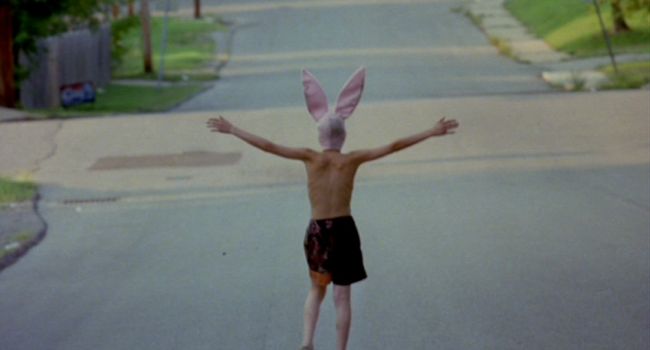 There is a recurring theme in Gummo, something that is admittedly fascinating on paper, but in practice is pretty disgusting, thanks to centering on the murder, torture and consumption of cats. Despite claims to the contrary, actual dead cats are used at times, and given Korine’s “I’m so hardcore” comments in interviews, it wouldn’t surprise me one bit if cats were killed for the film.

Besides (to be as vague as possible to avoid spoilers), this theme is undermined by a ridiculous racist joke. And it’s not the only ridiculous racist joke in the film! There is some striking imagery and thematic composition, as well as a compelling underlying narrative (despite Korine’s claim that there is no narrative at all), but at the end of the day, Gummo feels like a poster child for the “Let me tell you, it’s tough being white” brigade. 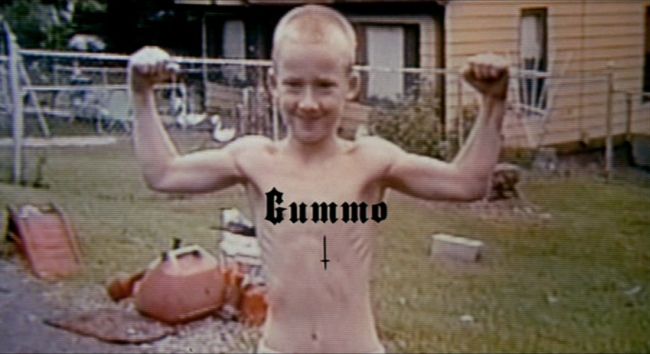 Gummo lacks both form and function, and one feels that when Korine states in the DVD’s accompanying interview that he never cared about a sociopolitical statement, it’s a bit of revisionist history on his part. There is more than a hint of a larger point to be made in the film. Unfortunately, Korine’s stylistic choice, while not the result of bad filmmaking, is not a format that really fits the subject matter, either.

The MOD DVD release of Gummo comes with cast bios, a short audio interview with Korine that is accompanied by still photos from production, and the film is subtitled in English.