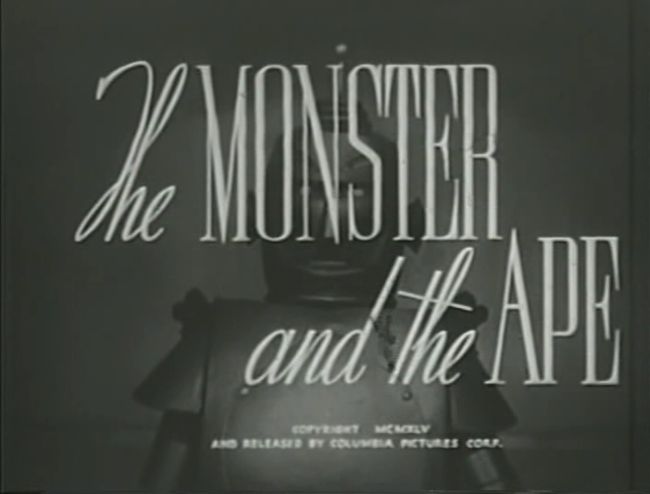 The Monster and the Ape
Chapter #1: The Mechanical Terror

Against my better judgement and as every synapse in my brain pleads with me to stop, SBBN is proud to announce a new series of recaps based on a classic movie serial: The Monster and the Ape (1945). A touching story of a robot — The Metalogen Man — and his big angry monkey pal Thor, The Monster and the Ape is silly serial cinema of the highest order, and promises to just irritate the everloving hell out of me. You can join along here at OVGuide, which has the entire serial in one huge chunk, apparently sponsored by Fandor, which is a bit of a surprise because Fandor is a pretty classy jernt and I can’t see them getting mixed up in something like this. Perhaps they are not aware that this serial features a man in a gorilla suit. 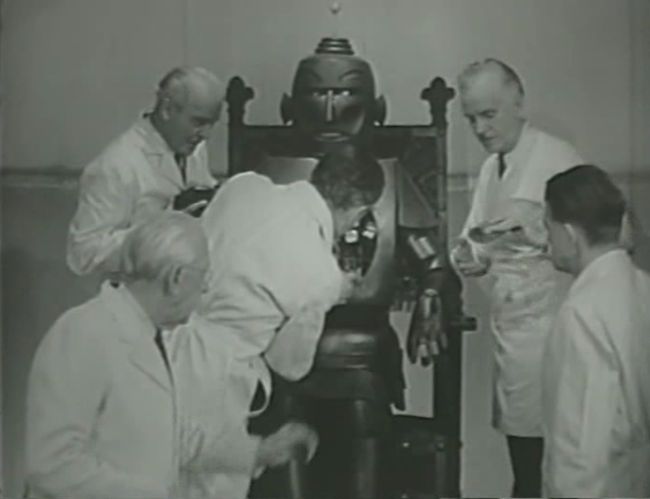 We open as a group of important scientists — you can tell they’re important because they have pristine, starched and pressed white lab coats, bestowed upon them at their graduation from Important Science University — fiddle with a robot, who has been sitting comfortably in his chair, just chillin’, lookin’ around, ain’t no thing.

“If we flange this widginator into the modulatron, this feller might just be able to do long division!”

Professor Franklin Arnold (Ralph Morgan, who I am going to call Frank one of these days, so just be prepared for it) addresses the crowd, explaining that The Metalogen Man will have myriad industrial uses, i.e. will put all humans out of any decent-paying jobs left in the country. The crowd has gathered to see the Man activated for the first time, because it always makes sense to present new scientific discoveries to a general public audience without having tested anything first. 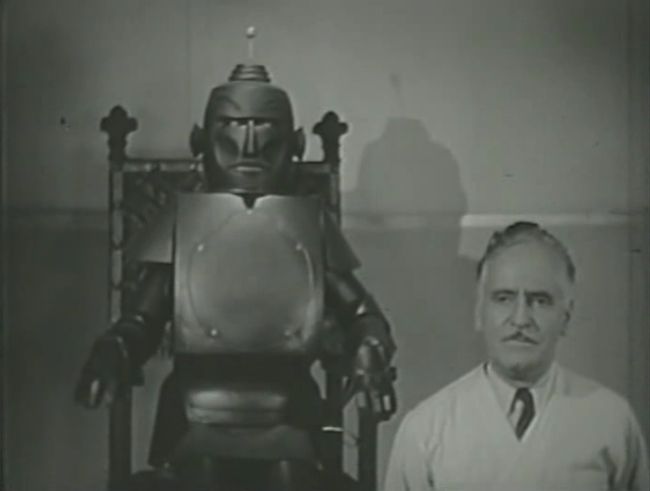 M-Bot passes the demonstration with flying colors, lifting enormous blocks of styrofoam, rapidly blinking his little light bulb eyes and bowing at the ladies. Damn attention whore. Everyone is most pleased.

But this is a bad movie serial, and pleasure does not last long. As two of our esteemed scientists drive away from their evening of stunning success, a mysterious voice commandeers all radio frequencies and announces the scientists have taken credit for his invention and are passing off The Metalogen Man as their own. This induces a lot of harrumphing and monocle dropping in our fair scientists, when suddenly behind them: 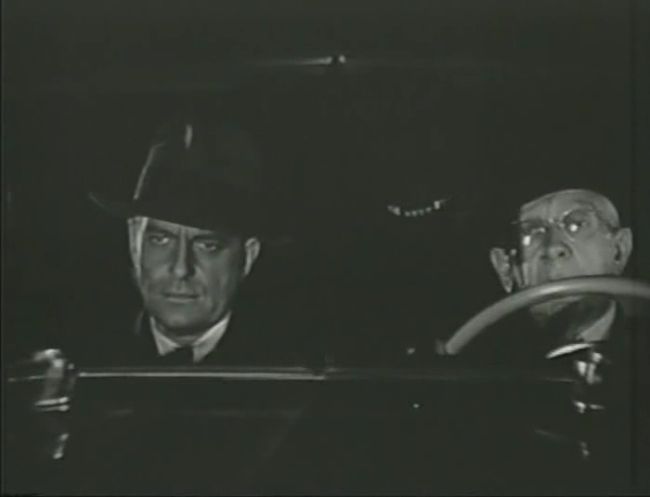 A guy in a gorilla suit with glow-in-the-dark teeth! Well, you can’t say that’s not frightening.

I just want to note here that M-Bot, so dubbed by me because he da man, is often referred to as “the Metalogen Man,” which is pronounced very oddly, even for an invented word: met-AL-oh-gun. It sounds like a reference to someone who lives in the country of Metallica, “In 1583, Jeff Splitends was named leader of the Metallican empire…” And “robot” is of course pronounced “row-bitt,” which I enjoy.

Our new friend, Guy In Gorilla Suit, neatly dispatches the two scientists and then sneaks into the home of a third, where the classic comedy routine of someone looking to the right, then to the left just as a creature from the left jumps on them is deployed, though I suspect the serial did not mean it as a funny. It is hilarious, though, trust me on this. 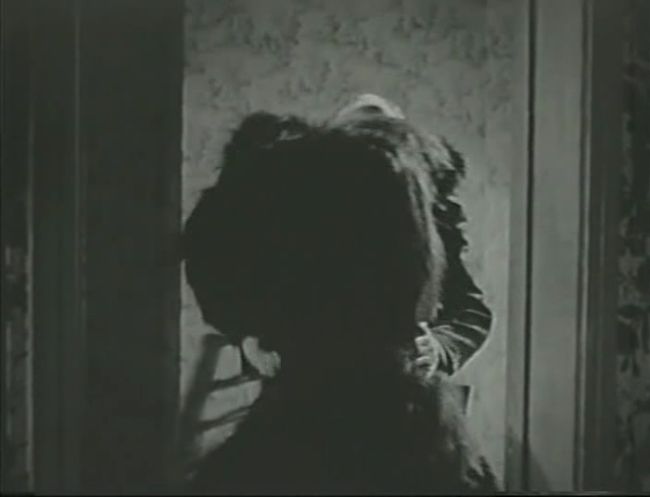 Hey, hey, watch your hands, professor. He’s not that kind of ape!

A struggle ensues, the scientist is vanquished, and only Professor Arnold (Ralph Morgan) and Professor Ernst (George MacReady) from the original team survive. Meanwhile, Prof. Arnold informs his daughter Babs (oh god, the bastard screenwriters named her “Babs,” you assholes) that a new scientist is coming to their lab to study M-Bot. Keep in mind he doesn’t know the other scientists are dead yet; the new scientist isn’t a replacement.

Two men that you know are up to no good go to meet our hero at the train station: 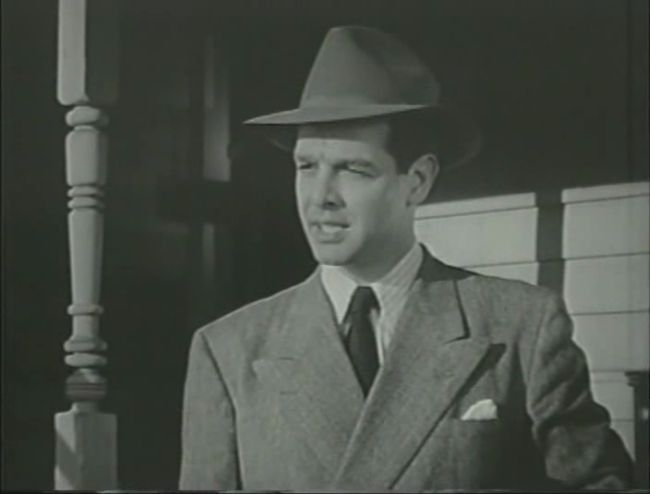 That’s Robert Lowery as Ken Morgan, ladies and gentlemen. Now, we in the audience know that the men who have come to meet him are nogoodniks, because the sinister voice on the radio is our friend Jack Ingram, possessed of a voice that’s a distinctive blend of John Wayne and Al Bridge. We heard him over the radio and now realize he’s the driver of the truck, so are shouting, “Nooo, Bland White Alleged Hero Guy, don’t go with them in their truck!” But Hero Ken, and even though he should know that these guys are up to no good, because he was asked at the last minute to meet someone at the Oakland stop many miles away from the station he was scheduled to be at, plus these two are in a beat-up truck with some handpainted “laboratory” signs on them, doesn’t heed our warnings.

Jack Ingram of the interesting sinister voice, by the way, was Braddock in Raiders of Ghost City. Ingram plays henchman Dick Nordik, which is just the funniest name ever, and I’ll be laughing about it for days. “Dick Nor Dick.” Heh. You know the screenwriters didn’t catch their own joke.

True to bad movie serial form, Hero Ken gets into the truck and within seconds finds himself blackjacked and splayed on the ground: 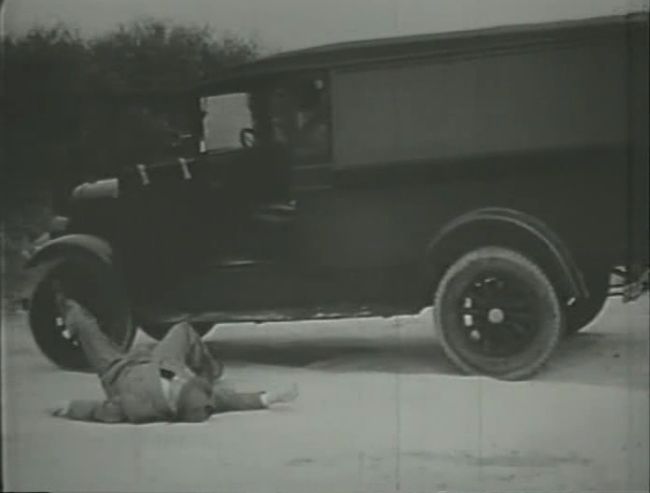 He’s left behind as the henchmen head off to the laboratory to steal M-Bot. Ken, who was literally punched down a hill in one of those scenes which weren’t supposed to be funny but I laughed at a lot, climbs back out just in time to coincidentally hitchhike a ride from Prof. Arnold and Babs (Carole Mathews). By the time they get back to the lab, the robot is gone, but the henchmen forgot the computer tape needed to run the guy. Arnold decides to take the tape to Prof. Ernst’s house and let him know about everything that has been going on.

Here’s where we find out the sinister plan: Prof. Ernst is the guy behind all of this! George MacReady, playing a bad guy? So strange. Ernst has his henchmen hanging around to mug Arnold and get the tape as he arrives at his home, and it works, so now Ernst has the power of M-Bot at his disposal! 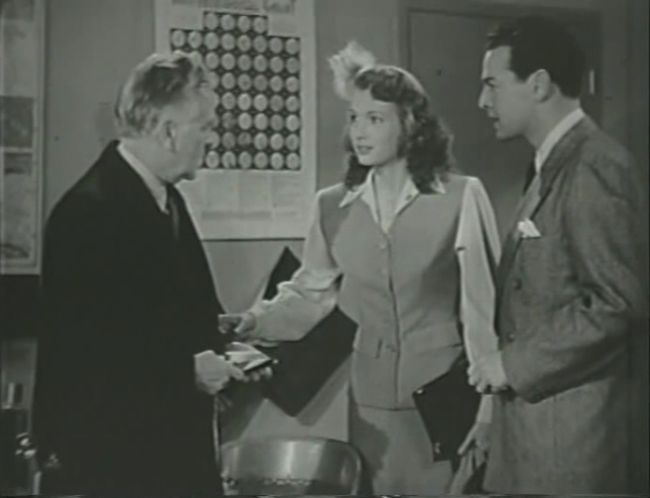 Professor Arnold, Babs and Ken. I haven’t mentioned one of the main players in this serial: Willie Best. As “Flash” (ugh), the chauffeur and assistant, Best doesn’t have much of a role in this episode, though he’s well credited so I assume his role will increase in due time.

But Arnold quickly figures out that Ernst is a bad man, thus the henchmen are tasked with dragging him into a hidden laboratory filled with neat stuff stolen from Kenneth Strickfadden’s garage. Babs and Ken arrive at Ernst’s home, too, and also quickly realize Ernst is a big meaniehead, forcing Ernst to shove Babs behind a secret wall while Ken gets into a lengthy fight sequence with the henchmen as he tries to save Arnold from being shoved into a pit full of sparks. The sequence ends when M-Bot gets activated, picks up Ken and drops him into a pit full of sparks. 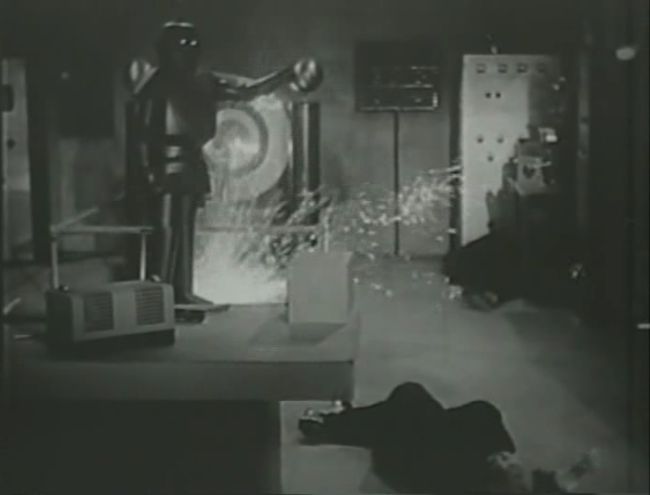 None of this makes much sense, but you cannot deny that a sinister robot framed by the flames of hell as his victims lay conquered before him is a frightening sight.

We end this week’s episode with Babs behind a wall, Arnold just coming to and Ken laying in a pit full of sparks, as one does. 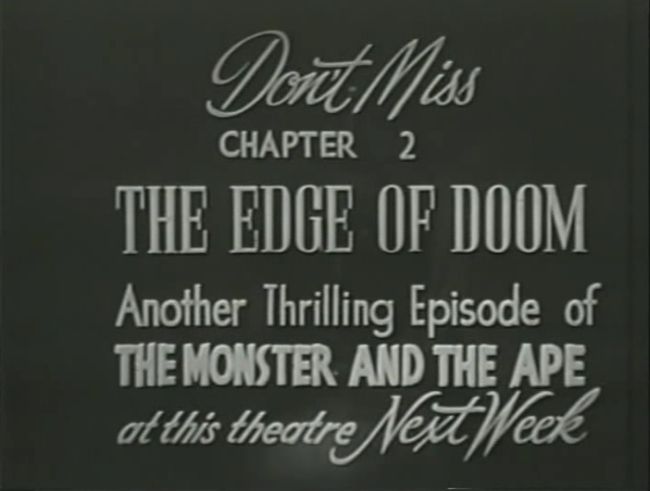