Gloria Swanson: Glamorous star of the cinema or victim of a horrible smear campaign designed to make her seem mortal, adorable and occasionally clad in a swimsuit, just like those harlot Sennett broads? 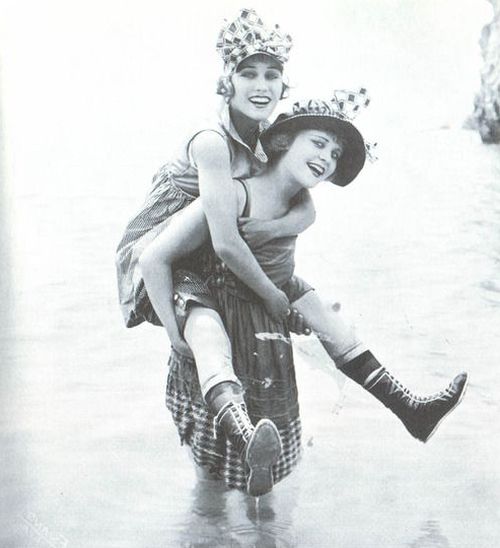 Gloria Swanson clowning around with Phyllis Haver while on the set of The Pullman Bride (1917), absolutely not being a Bathing Beauty at all. 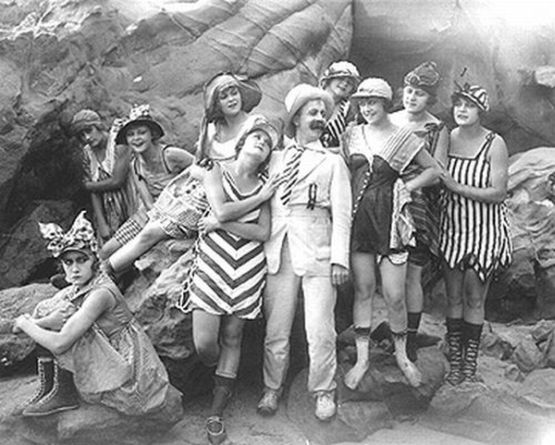 Gloria sulks while the Beauties yuk it up with Chester Conklin in The Pullman Bride.

Gloria Swanson’s career began when she was a teen and was given roles in a few slapstick shorts at Charlie Chaplin’s Essanay Studios. When she left Essanay, Gloria spent nearly a year out of films until hired by Keystone in 1916. She had worked with Wallace Beery at Essanay and again at Keystone, and they married in 1916 on her 17th birthday. The marriage did not last and was, by Swanson’s own account, a nightmare of abuse. 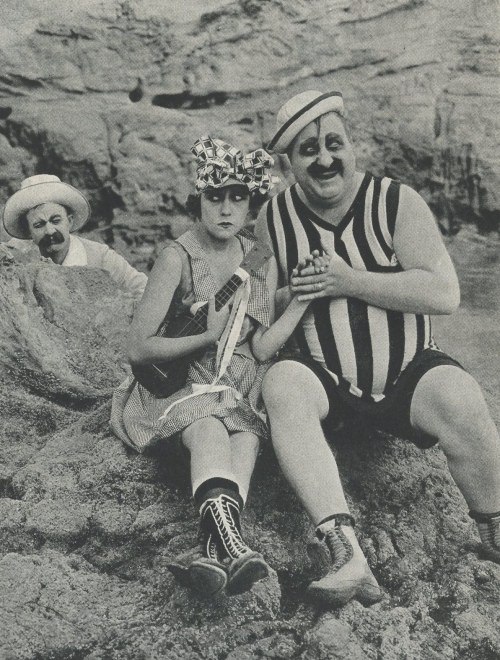 Gloria and Mack Swain in The Pullman Bride; Chester looks on.

The Pullman Bride was Gloria’s final film with Keystone. She had been spotted by director Frank Borzage and cast in 1918 as the lead in his drama Society for Sale, co-starring William Desmond.

Gloria always maintained she was not actually a Bathing Beauty, but rather a featured actress in Sennett comedies that also starred Bathing Beauties. More about her Bathing Beauty Days can be found at Anne Helen Petersen’s The Hairpin, which hilariously repeats the mistake that the photo of Marie Prevost on a boat helmed by Sennett superpooch Teddy is actually Gloria. The confusion likely comes from Gloria starring in Teddy at the Throttle while working with Sennett — though the throttle in the film is of a train, not a boat. The Silent Movies Calendar misidentified the same photo in 2011, which may be where Petersen got her info. 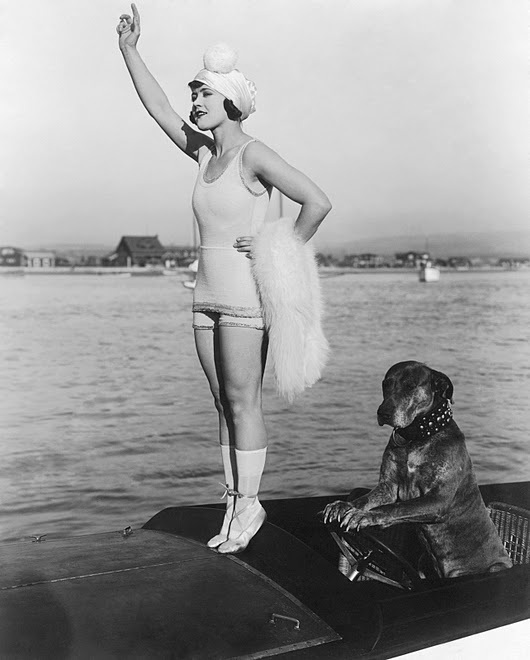 The problem is that many on the internet have posted this picture of Marie as proof that Gloria was a Bathing Beauty. Personally, I think she was, at least for the first couple of Sennett shorts, but this picture doesn’t prove anything of the sort — it’s not Gloria.

We don’t need that particular picture to see Swanson looking like a Bathing Beauty, anyway. She was certainly a featured actress in several shorts, but at the same time was frequently shown in the same adorable hats and suits in frisky poses as other background Beauties. 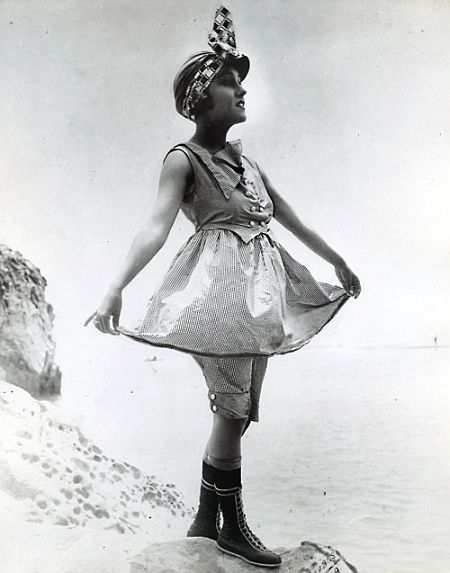 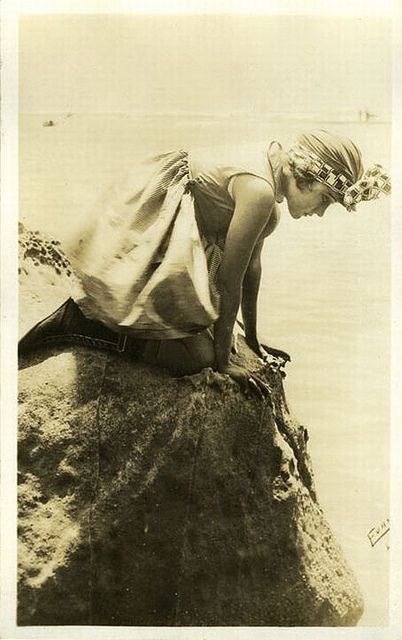 Below is a series of pictures of Gloria and Marie Prevost, usually credited to the film Why Beaches Are Popular (1919). Life Magazine’s 1950 article on Sunset Blvd. dates a photo in this series to 1918. Both credits are unlikely, as Swanson wasn’t in any Sennett shorts after 1917 — she had left Sennett by the time she did her first film with Borzage in 1918, and by 1919, she moved on to a series of unfathomably popular and slightly saucy flicks such as Don’t Change Your Husband and Male and Female. These photos of Gloria and Marie must date to 1917 or 1916.

Complicating matters is Stardust and Shadows, an unfortunately inaccurate book that quotes Sennett as saying he asked Gloria to pose in a swimsuit only briefly, for her third Keystone film (Hearts and Sparks, presumably). But Marie wasn’t in Hearts and Sparks, nor was Phyllis Haver, both Beauties who Gloria obviously posed in a bathing suit with.

The only film Gloria and Marie were in together, at least according to the IMDb, which is the only source I have until some kind benefactor buys me Brent Walker’s Mack Sennett’s Fun Factory, was the elusive 1916 flick Sunshine: 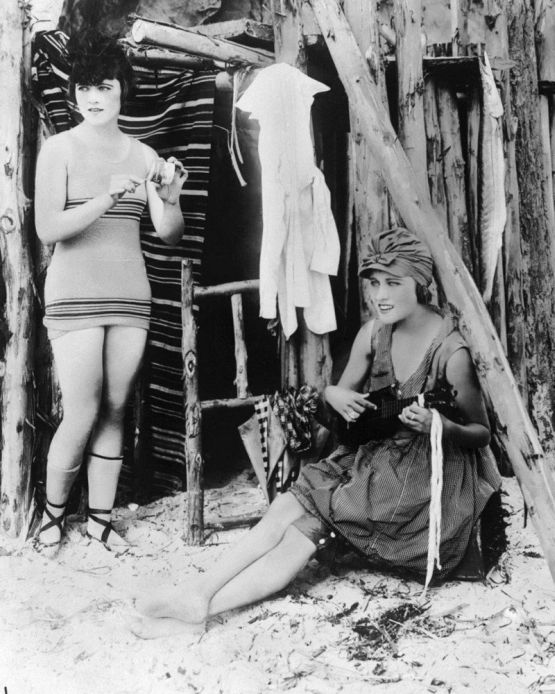 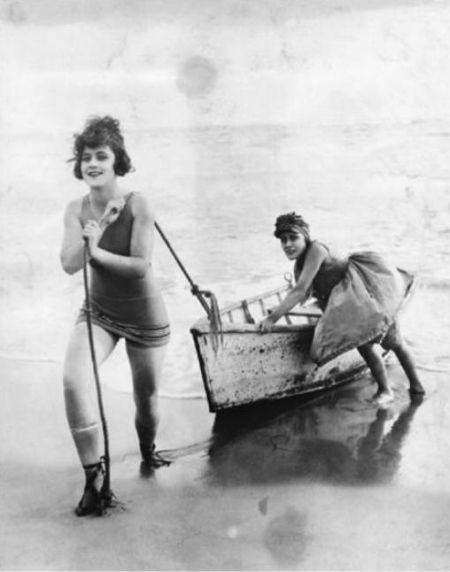 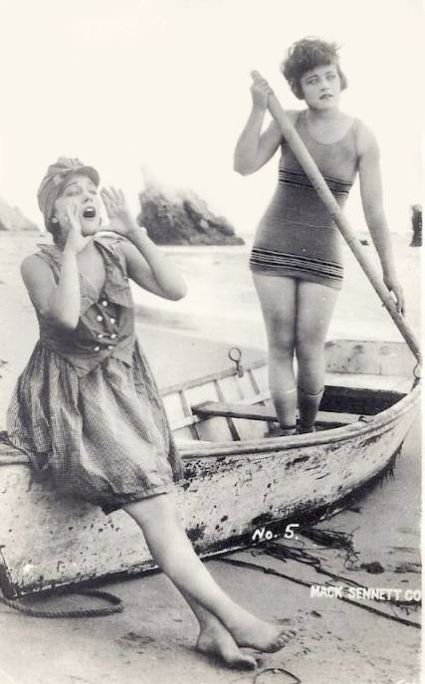 Without details about the first films Swanson did for Keystone, and with all the conflicting reports (and since these shorts do not survive), it’s impossible to know for sure if these are from Sunshine or not. However, it’s curious that Gloria is posing with Marie who, during Gloria’s time with Sennett, was mostly unknown. One would assume that if Gloria was a featured star and not a Beauty, they wouldn’t be putting her in a series of swimming suit promotionals with unknowns, or by herself in those flirty little poses.

However, it’s possible Marie wasn’t as unknown as we often assume. She was in a couple of shorts for Sennett prior to Sunshine, probably including Those Bitter Sweets, though someone has removed that title from her IMDb listing, which I hope happened because of actual research and not from idiocy. Marie was also in Unto Those Who Sin (1916), a feature length film from Selig Polyscope, one in which she plays a small but named part. If Marie had indeed been in what I will loosely call a “real” film prior to Sunshine, then her billing above Swanson on the IMDb may truly reflect the credits in the film; that is, Marie and Phyllis Haver may have “only” been Beauties, but they were on equal star footing with Gloria. That’s one reason I don’t think it’s fair to say Swanson was always better than the Beauties and not one of “those” kind of girls. 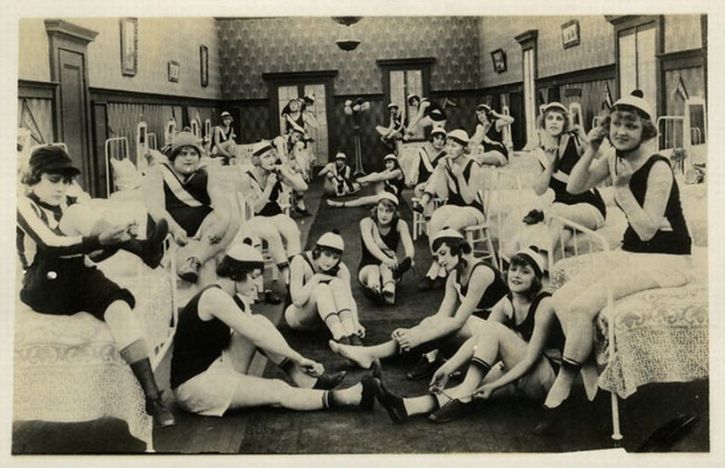 That said, Gloria was indeed regularly featured as separate from the Beauties. We already saw her as a featured player in Pullman Bride. In the above photo, she’s the referee on the far left. Though this picture is often credited as being from the Baseball Madness short, it isn’t; Madness is a “Baseball Bill” flick from Universal and did not star Mack Sennett’s Beauties. I couldn’t tell you what short this is from or who the girls are, although both girls on the floor to the front are alternately credited as Marie, depending on who you read. 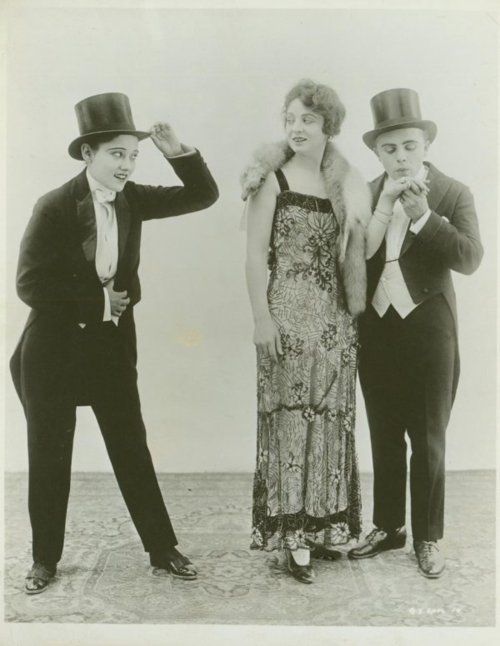 Above, Gloria in drag in The Danger Girl (1916). Marie would also appear in a tux in Mack Sennett’s 1918 His Hidden Purpose in a non-Beauty role. Note that no one has a problem calling Marie a former Bathing Beauty.

There is no indisputable answer to whether Gloria Swanson was a Bathing Beauty. Mack Sennett has said both that Gloria was a Beauty (in King of Comedy) and that she wasn’t (page 330 of the unreliable Stardust and Shadows). Newspapers called Swanson a former Bathing Beauty, she was described as such by Harvard before a 1949 visit, and the above-mentioned Life Magazine article takes a still from Sunset Blvd. where Norma is spoofing Bathing Beauties to entertain Joe Gillis, and places it immediately beside a promotional from that series of pics with Marie above, calling both Gloria and Norma Desmond former Bathing Beauties. Her Associated Press obituary says she started her career as a Beauty.

Gloria herself repeatedly stated she was not a Beauty, and in various interviews and her biography she made no bones about the fact that she considered herself above the others at Keystone. Swanson was obsessed with being glamour incarnate, a woman of significant social standing, and Beauties were considered relatively low class by comparison; she obviously wanted to distance herself from that reputation. 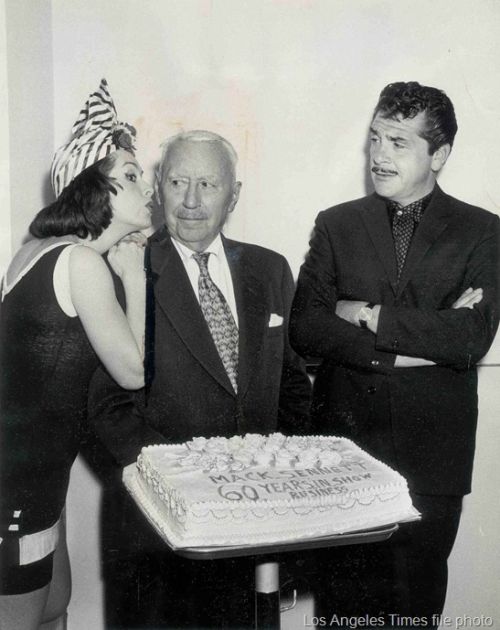 A little bonus picture courtesy The Los Angeles Times archives: Edie Adams, Mack Sennett and Ernie Kovacs celebrate Sennett’s 60th year in show business. That would date this to 1962, though Kovacs died in January of that year, and (as pointed out in comments) Sennett died in 1960, so this is probably from about the same time Mack Sennett appeared on Kovacs’ show “Take A Good Look,” which aired in 1960 (per a listing of Kovacs’ shows on Facebook). Note Edie is dressed exactly like Gloria Swanson, with the same scarf bow in her hair and everything.

It’s understandable that some want to defend Swanson and encourage people to respect her wishes. At the same time, Swanson and others felt the need to demean the Beauties, to shrug them off as inexperienced girls with nothing but their bodies as talent, and all in the service of elevating Swanson to god-like heights. Even Jeanine Basinger in Silent Stars sympathizes with Swanson’s anger at being called a Bathing Beauty, because Swanson was more than “just another pretty face” and had acting experience, and it was “demeaning” to equate her with a Beauty.

It’s a classist, even sexist thing to dismiss the Beauties in that manner. While they were undoubtedly cheesecake used to get butts into theater seats, to sell postcards and magazines and newspapers, they were also on the front lines of the flapper generation. They continued to pose, enter contests, appear in films, and be fun-loving women wearing what they wanted in an era where swimsuits like theirs were banned across the U.S. Further, the Beauties aren’t given credit for what they did beyond looking pretty. Many performed admirably in roles comparable to men in Sennett shorts, those guys in the police uniforms and hilariously unconvincing facial hair. Several Beauties took turns being the featured female lead in Sennett shorts, and they along with the Beauties in background roles often performed their own stunts.

Many stars began their careers in the cheesecake or beefcake biz, and there is no shame in a young Gloria Swanson doing the same. Maybe she wasn’t technically a Mack Sennett Bathing Beauty, but she probably was, and that’s okay.

If you’re doing research and would like to use these posts, please note the following:
1) You can use my blog posts for sources, but they must be credited in footnotes or bibliography (as should any book, blog, magazine, or other source). You cannot just cut and paste sections of my blog into your own work. Please know that I will not just ignore copyright infringement, should it occur.
2) There may be errors in my blog posts. You’re responsible for doing your own research and verifying anything you read.
3) I will not help you with your Marie Prevost research. Please don’t ask.
4) I own some memorabilia, photos, archival docs, etc., but I do not lend them out for any reason. Please don’t ask.
5) Despite any claim you may have heard to the contrary, I have not assisted nor collaborated with anyone in their book or article on Marie Prevost.