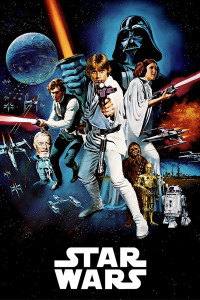 A quick note for fans of all things Stacia: I’ll be watching Star Wars (1977) for the first time ever this Friday, August 16, at 8:00 PM Central. I’ll be tweeting along to it with the hashtag #starwars, and would be tickled if anyone wanted to join in, or just come by to point and laugh.

The version of Star Wars (1977) I’ll be watching is the original theatrical version, the one found as a bonus on disc two of the 2006 DVD limited edition. I’ve heard this is a bad version from a 1993 telecine and blah blah blah, but I got tired of trying to sort out the mess caused by the re-edits (have you seen the Wikipedia articles on the edits? I blame you for this, Lucas), so I settled on this version.

Why haven’t I seen Star Wars before? It just worked out that way, I guess. I was a little too young to have seen it in theaters. When it was re-released in 1981, I was busy being moved from town to state to another town by my parents, although I understand the movie had already been altered by then. We ended up going to Wrath of Khan in 1982 as a sort of consolation prize, and I consider that a Big Win, as ST:WOK was the first film I saw in a theater that I had a real emotional, visceral connection to. Then somehow I missed Star Wars when it was shown on CBS in the mid 1980s, and after watching the “Lace” miniseries recently, I am almost positive my parents were watching that instead, and I doubt I was much interested at that point, anyway.

By the time I was living on my own, Star Wars had infamously been edited for its 1997 video release, and I wasn’t interested in seeing it unless I could see the theatrical version. For years, I was strangely proud of not having seen Star Wars. It was a conversation starter, and I often mentioned it to people who I figured would be particularly irritated by this factoid.

But now I’m trying to fill in the obvious gaps in my cinema experiences, and Star Wars is an enormous gap, even bigger than all the Disney I have cheerfully refused to watch (that’s a whole other post), and I might as well do this publicly to get maximum lulz from the situation.

Consider this post both an invitation to join me Friday at 8:00 PM and a warning to those who follow me on Twitter that I will be unusually irritating that night.