Last week on Raiders of Ghost City! Steve follows a trail that leads to Rackerby, a coffee company owner in San Francisco who is also a member of the nefarious gold raiders. After falling into a trapdoor and letting someone else defeat Rackerby, Steve rifles through the dead guy’s stuff and finally discovers — finally — that the gold raiders are actually Prussians. When Steve returns to Oro Grande, he sets up a trap to uncover the mole he suspects is hanging around the Wells Fargo office, feeding info to the Prussians. The trap doesn’t work at first but then does, and Bill, the stage driver, is caught. The baddies want to get to Bill before Steve tortures him with blandness and forces him to talk, so they kidnap Cathy and propose a prisoner exchange. Steve goes to rescue Cathy, but while he tries to untie her, a henchman sneaks up on him with a knife! Stabby-stabby motions are made! Did Steve survive? Let’s find out.

You can follow along with Raiders of Ghost City for free thanks to the Interhole, just click here. 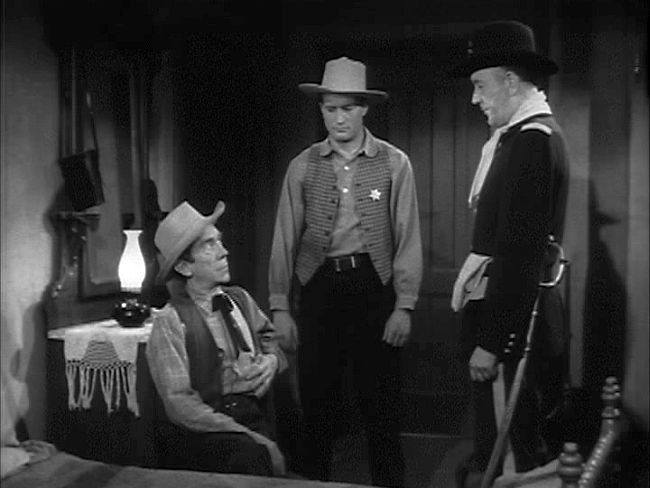 Bill is being questioned by Col. Sewell and another guy we’ve never seen before, the deputy sheriff, whose name I didn’t catch but I can only assume is Dirk Downtrodden. Bill insists he’s not a traitor, he’s a Prussian, therefore can’t technically betray the United States. It’s presented as a warning to all in the audience who may not know just how sneaky and low-down Germans really are, and a little “loose lips sink ships” propaganda is thrown in for good measure.

Just in case the presence of Dirk Downtrodden wasn’t enough of an indicator, Idaho Jones arrives just as Col. Sewell was leaving to deal with a tense situation with a tribe of Modoc Indians nearby. When everyone asks where Idaho has been since he apparently just wandered off after helping to apprehend Bill, he explains: “Chasing bull-bats! Always do, this time of night!” 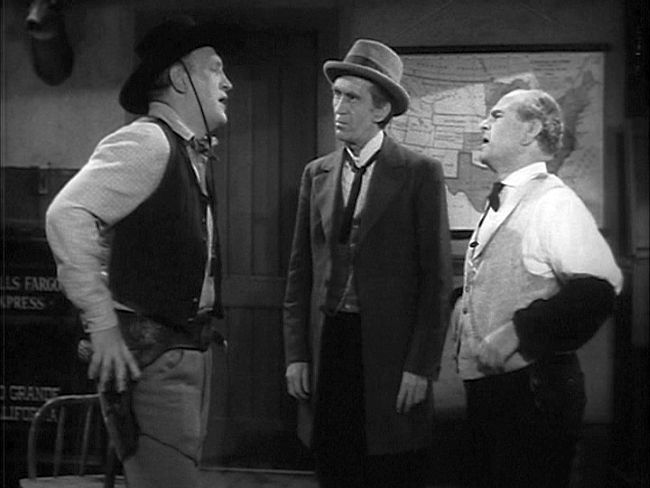 Waldorf here is rightly angry with him, while Doc stands straight as a board with a Frankenstare on his face, never blinking. Never. Blinking. I guess the mescaline has finally kicked in, folks.

Idaho is reminded that big doin’s are going on around here and rides off to find Steve, who is, as you will remember from last week’s episode, about to get stabbed while saving Cathy. But the serial cheats because the serial has no honor, and just as the guy who brought a knife to a gun fight is about to stab down… 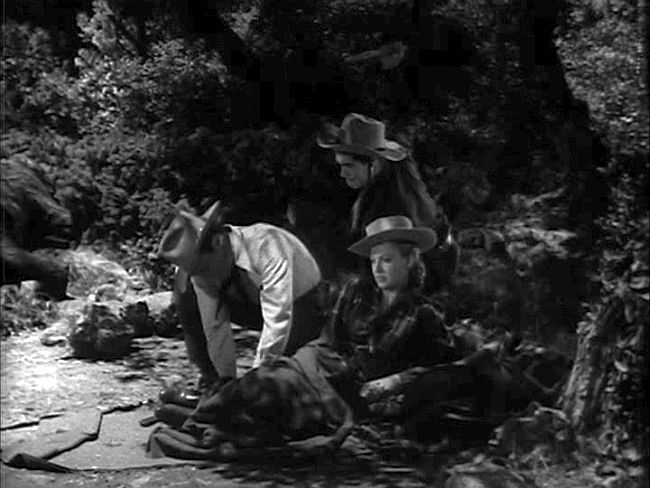 The trio ride away from the henchmen, but riding double slows them down, so Steve climbs up the same tree he hung by the armpits from back in Chapter 6 and perches, waiting for the slowest, dimmest henchman to pass underneath him. 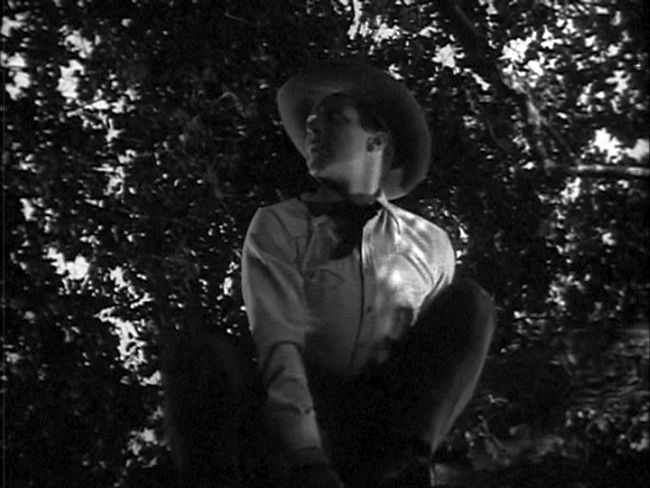 That henchman would be Harmon, a little guy we never really get to see because Steve straight up jumps on his head, kicks him a little and steals his horse. None of the other henchmen notice Harmon is gone except Braddock, and Rawhide just shrugs and says whatevs, the guy is always tired, he’ll show up sooner or later. He never does. Thus Harmon the Henchman is forgotten, forever lagging behind, forever laying under Prop Tree #17.A with a kicked head and no horse.

Steve peels outta there on his stolen supercharged horse of speed, but by the time he arrives at the Wells Fargo, he’s casually tying the horse down and walkin’ in like he ain’t got a care in the world. Every time one of the good guys escapes from the baddies, they just saunter into the  Fargo like this is a game of fucking Tag and as long as they get to their home base, they’re fine. And the henchmen act this way too, never once going into the Wells Fargo, with the exception of Trina who has more guts than the rest of raiders combined. So Steve moseys happily into the Wells Fargo… 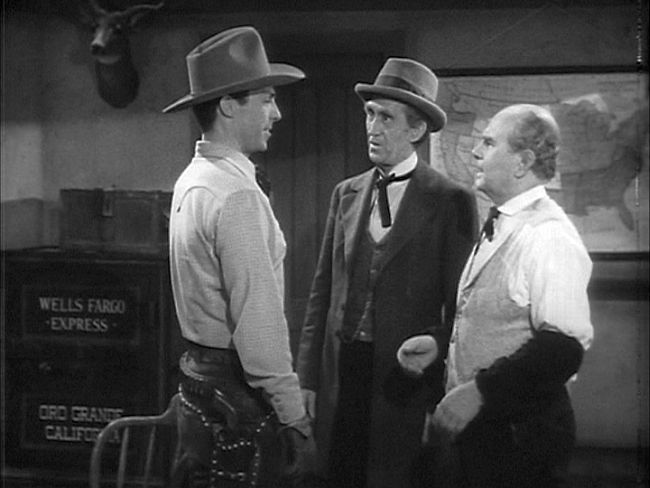 Where Doc and Waldorf have been standing ever since Bull-Bat Jones scurried out of the building a few hours earlier, trying to catch up to the plot. Doc informs Steve that Col. Sewell has returned from the Modoc village and an uprising is imminent, which complicates the matter of trying to find the raiders before they ship their ill-gotten gold out of the country.

Meanwhile, Bill. Remember Bill? Yeah, the bad guys can’t exchange Cathy for Bill anymore since they lost Cathy, which is pretty sad since she’s not so small she’ll just fall out of your pocket or anything. Alex Morel concocts a plan to send Bill some poison food to kill him dead before he can talk. Now, that’s just silly. No one in the Wells Fargo is going to let a stranger come in with food for their prisoner 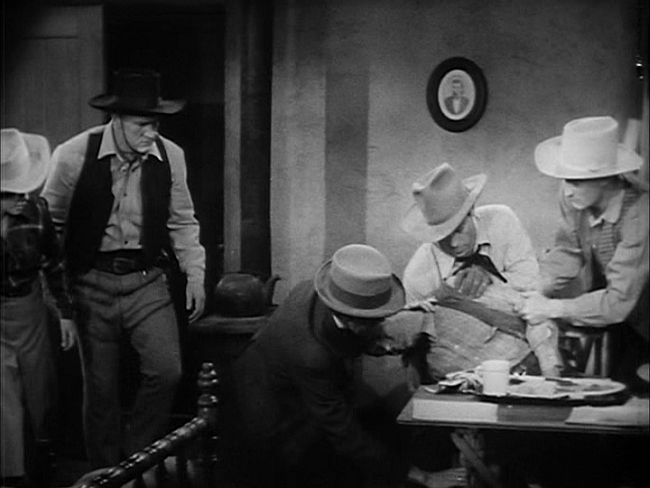 oh wait, I forgot who I was talking about. Everyone walks into the room and sees Bill pulling a whole Rose For Emily deal by dying during dinner, and deputy sheriff Dirk Downtrodden, standing right next to him, never noticed. Rest in peace, Statler-Bill. We never liked you and don’t give a damn that you croaked while eating poison beans.

Steve gets his friends in on the corpse-robbing act and they all start rifling through Bill’s old room. 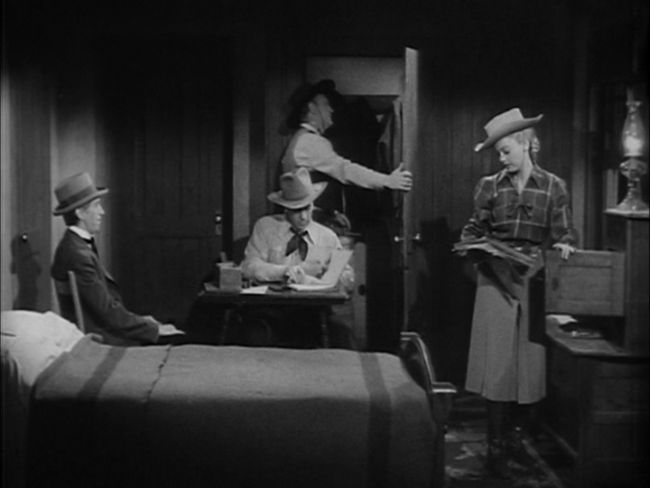 They discover another 1752 coin, and eventually piece together the story: Cathy’s dad, dead before the serial began, had discovered Bill was a Prussian, but Bill killed him and planted a 1752 coin on him to make investigators believe he was one of the raiders. Then Bill apparently stole someone else’s coin, a guy who, per the code book stolen out of the deceased Rackerby’s belongings, is named Frederick Lanz. I don’t know who that is, and neither does the IMDb, so we’ll disregard it. Not important; moving on.

After briefly considering leaving because the crime he was investigating, the death of Cathy’s dad, was now solved, Idaho decides to stay and help Steve find the Prussians. They discover the tapped telegraph line in Bill’s closet, and Idaho knows immediately he doesn’t have to bother digging it up, it goes right to the Golden Eagle. 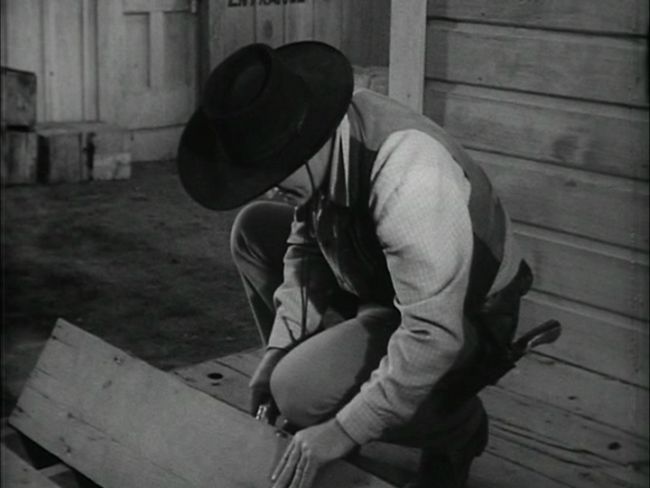 Which is why in the very next scene we see Idaho digging up the telegraph line to see where it leads.

This unsurprisingly gives the bad guys time to pack up their Deep Dark Lair of Telegraphy and hatch another brilliant scheme: Have Braddock and the boys rob the Golden Eagle so Alex and Trina can claim they had no idea that the raiders were using it as a meeting place, no sir, not them. 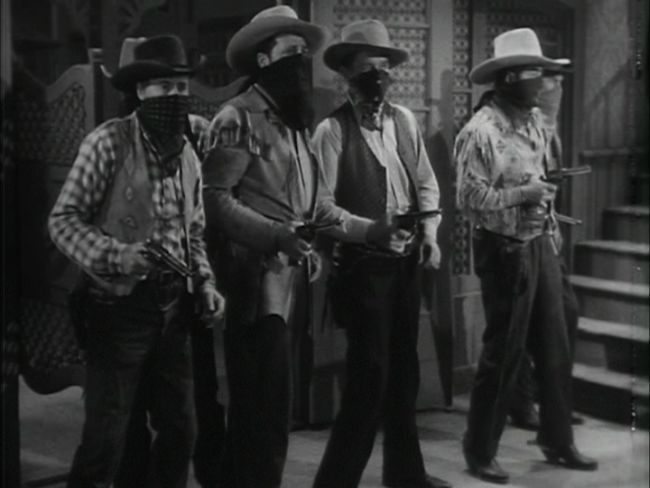 During this entire damn serial, the henchmen have refused to do sensible things like go into the Wells Fargo to get that nosey Steve guy, claiming that they have regular lives and jobs and can’t be outed as raiders. They even made a big deal of Rawhide’s face being seen by the good guys, meaning he won’t be able to work in town anymore, now that everyone knows he’s a raider, which they couldn’t tell despite the big fringey unique jacket he wears everywhere identifying him as well as his face ever would. But seeing their faces was a problem… and yet, here they are in kerchiefs. Kerchiefs that hide their faces! What a grand idea, and a solution to so many problems they have had over the last nine chapters! Well, I’m glad that’s settled.

Okay, so the henchmen, who we just discovered really are smart enough to learn things, begin fake robbing the Golden Eagle. 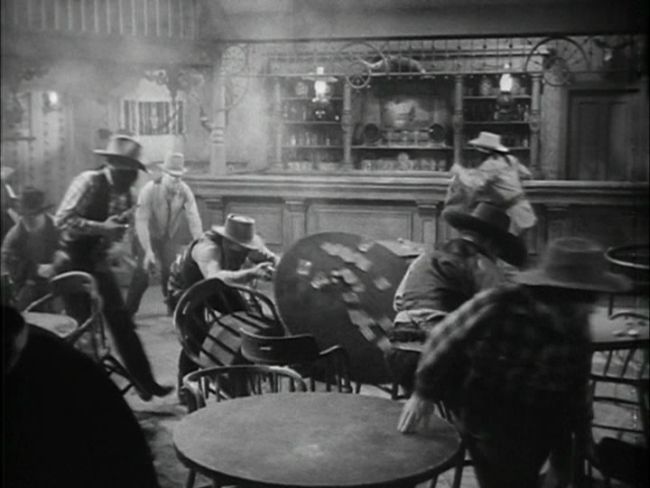 All they really do is shoot guns randomly and tip tables over and cause a scene, while Rawhide grabs the satchel allegedly full of money and tries to make off with it. 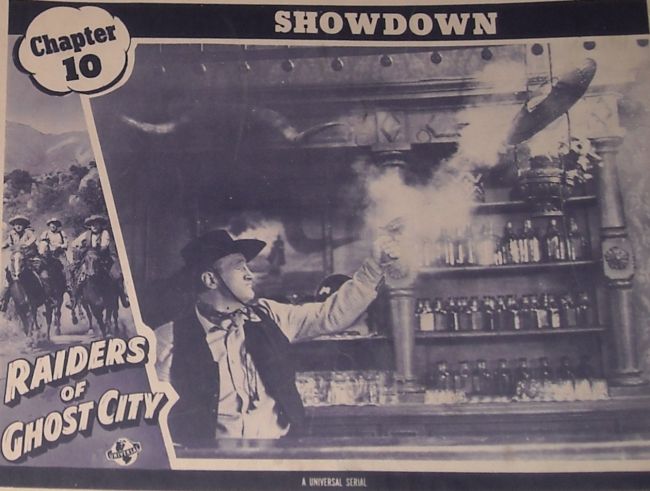 Bull-Bat over here shoots out the lanterns because why not, but kudos to the producers for finally having a photo on the lobby cards that matches the episode it goes with. Meanwhile Steve runs upstairs, because why not. He sees Rawhide with the important luggage outside a window, so once again just jumps right on top of a henchman’s head. 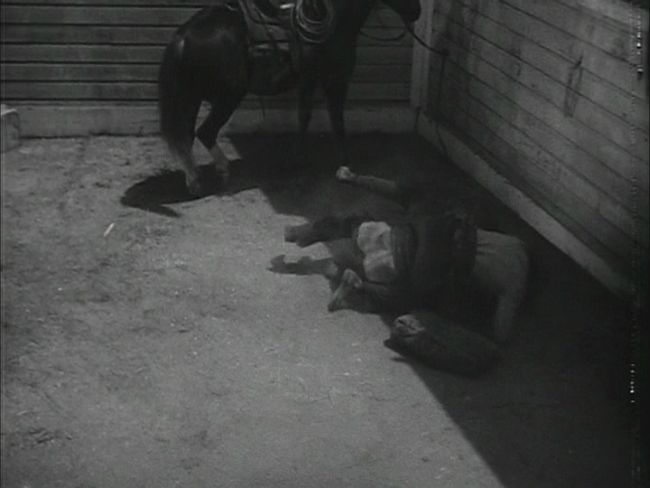 The love that dare not speak its name.

Trina, once again proving smarter and braver than anyone else in this sordid Prussian gold affair, shoots the shit out of both of them down below.

Who will survive? Probably Trina, but I can’t guarantee anyone else in this serial is smart enough to not eat poison beans or shoot themselves in the foot while tying their shoes.