Last week on Raiders of Ghost City! Both the secret Prussians and our ostensible heroes are on a search for luggage! Specfically, the bags belonging to head bad guy and now dead guy Von Rinkton, known far and wide as Der Dinkerplatz ¹, which they believe contains vital information about the gold raiders. The Prussians are afraid Der Dinkerplatz had documents that will reveal them as, er, Prussians, while Capt. Steve and Idaho Joe are looking for any information at all about the gang. The luggage turns out to reveal nothing, but a business card for a coffee company in San Francisco was on Der Dinkerplatz’s person, so Steve decides to take a trip. Meanwhile, someone has been feeding info to the Prussians, and when they learn Steve is off to San Fran, Trina rushes to get there before him and inform Rackerby at the coffee company of what’s going on. When Steve arrives, we learn through his attempt to fool Rackerby that these 1752 European coins we keep finding on corpses can be opened to reveal a short code which matches up with names in a code book, thus identifying the holder. Unfortunately, Steve has already been identified as a good guy, so Steve obligingly walks onto an obvious trap door that Coffee Man springs open. Steve falls! What will happen next?

Thanks to the magic known as the intertubes, you can follow along with Raiders of Ghost City here.

Sure, this episode has the same title as an epically bad 1987 action movie starring Sharon Stone, Brad Davis and Jonathan Banks, but I can promise you before watching even a frame of Chapter Nine that it will never, ever be as awesome. And we know this because… 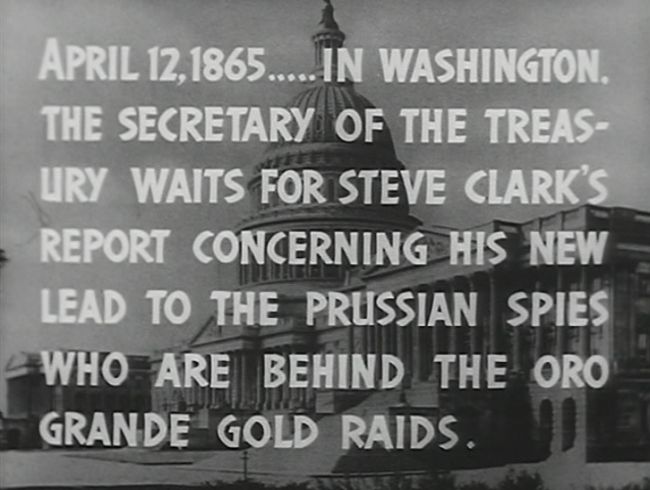 Yeah. Again, serial, and please listen to me this time: The good guys don’t know it’s Prussians yet! They don’t!

The appearance of the chinbeards confirms this: The soldier has just brought word that Steve is investigating Rackerby, and neither know who Rackerby is, so they sure as hell have no idea Prussians are behind the gold thefts, which stopped back in Chapter One but we’re going to pretend like we don’t know that. 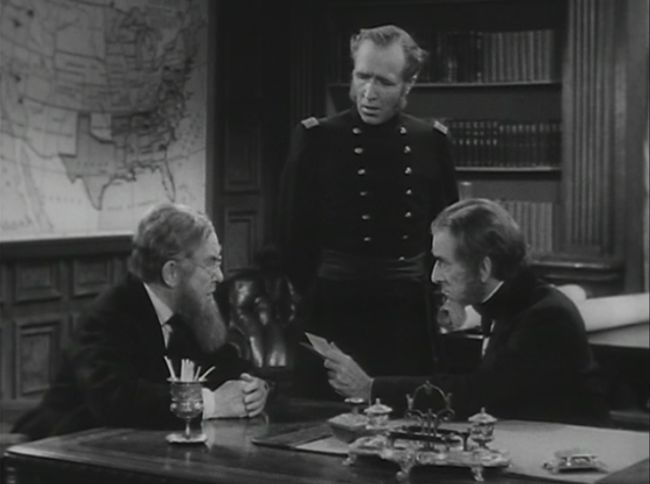 Oh, and this is interesting: Chinbeard on the left is a senator, while the one on the right, the one made to look like Lincoln, is known as “Fesserman.” The soldier pronounces this in such a way as to sound like “president,” all while “Hail to the Chief” is playing. But why? Why did they create a Lincoln-esque stand in and then change him to Fesserman the bureaucratic chinbeard? Oy.

Back at the coffee company, Trina and Rackerby act as though Steve is already dead, even though he just fell a few feet through a trapdoor and is now being held by a burly sailor. 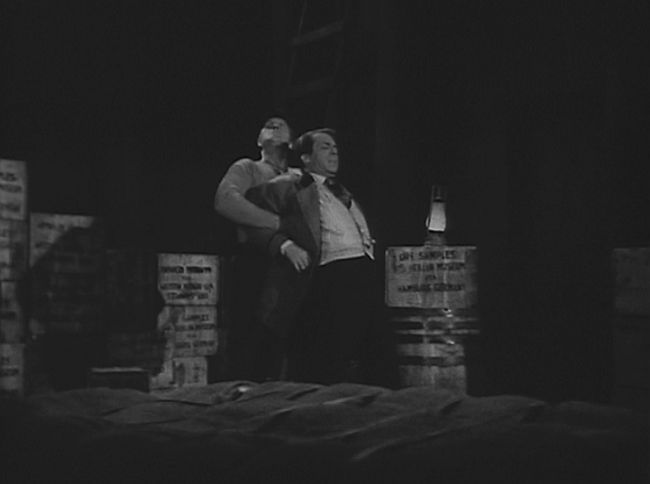 Trina leaves, thinking Steve is dead, and Rackerby quickly decides to question Steve before killing him, which turns out great for the bad guys because it gives Steve time to beat the sailor, plus some government agents show up, I assume sent by chinbeards, the same ones who had never heard of Rackerb but apparently know all about him now. 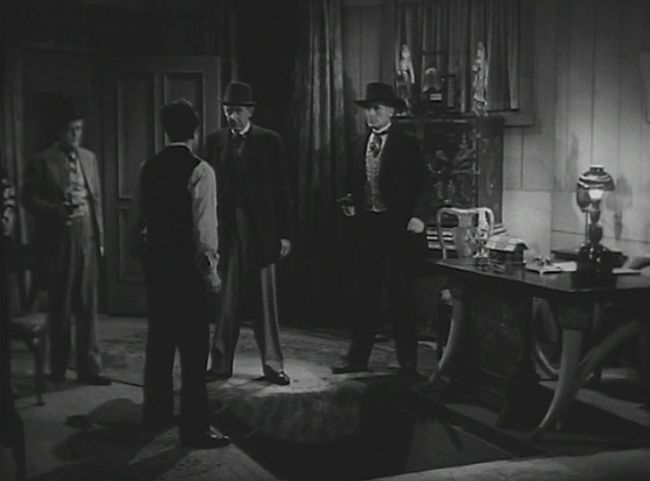 Just look at that: The throw rug wasn’t even covering the trapdoor! How could Steve have fallen for that? The guy must be as dull as a unassembled particle board furniture. The Feds take Rackerby out while Steve comes out of his hole and starts rifling through Rackerby’s desk, because that is all he does, rifle through the belongings of the recently deceased. He and a Fed find more 1752 coins and the code book and finally figure out the bad guys are Prussians. 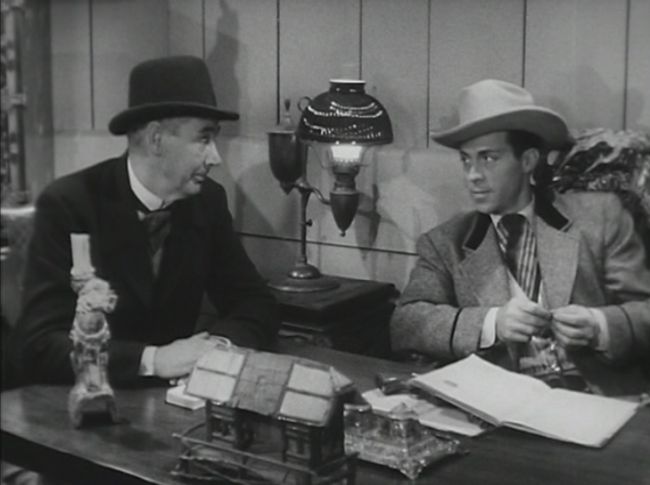 “Hey, did you know these guys were Prussians?”
“Not a clue, Steve. Not a fucking clue.”

So the writers crack open their seventh grade history books again and lay some sweet European trivia on us: In 1752, Prussian King Frederick the Great composed his political testament, which Raiders tells us outlines his plan to take over the world. In truth, it was more about the reunification of Prussia after the Partitions. What’s important to note, however, is Frederick makes some clear antisemitic remarks in his Testament politique, thus it’s invoked here as another example of Prussians being used as stand-ins for modern day Nazis. Whether this is deliberate studio-funded propaganda or not, I don’t know, though the fact that the Testament politique wasn’t published until 1920, over 50 years after the events shown in Raiders, makes me concerned that it’s some deliberate retconning on the part of Universal in an effort to push forward the “See, Germans was always evil, they was” trope.

When Steve returns to Oro Grande, Alex sees them and knows something is up, what with Steve not being dead and all. He pulls Trina from the saloon to ask about what happened, and she shrugs it off, as we all do when someone we’re sure is dead comes walking back into our lives. She assures him Steve couldn’t have gotten any information from Rackerby’s, though we know that’s not true, but the bad guys don’t realize it yet. 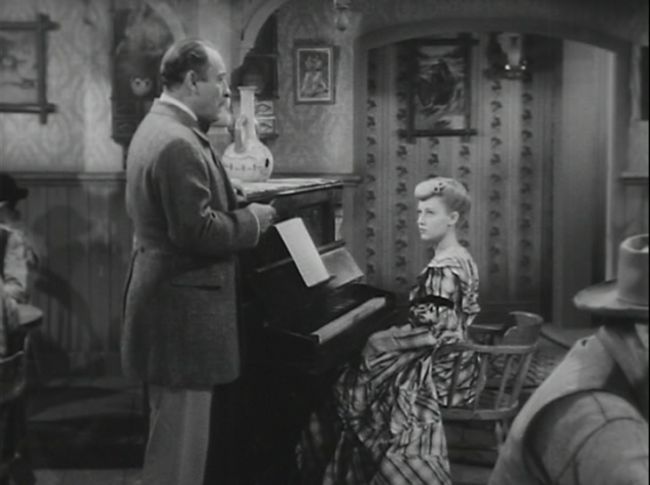 The discussions between Trina, Alex and assorted Prussian bad guys are always the same: Someone comes into the saloon where Trina is playing piano, they sneak off together to Alex’s office in the back, and either talk there or go down the secret door to the Lair of the Telegraph Monster and talk. Their discussion is usually recaps of what we already know. It’s boring. It’s the same camera set up, same blocking, Trina even has the same plaid dress most of the time, and most of all it completely undermines any menace the bad guys could possibly have had.

Back at the Wells Fargo, the Union Colonel Sewell has returned to help Steve, perhaps under the orders of the chinbeards, but we do not know. Steve is sure there is a mole in the Wells Fargo office, and the suspects are the only two people it could possibly be: Statler and/or Waldorf. 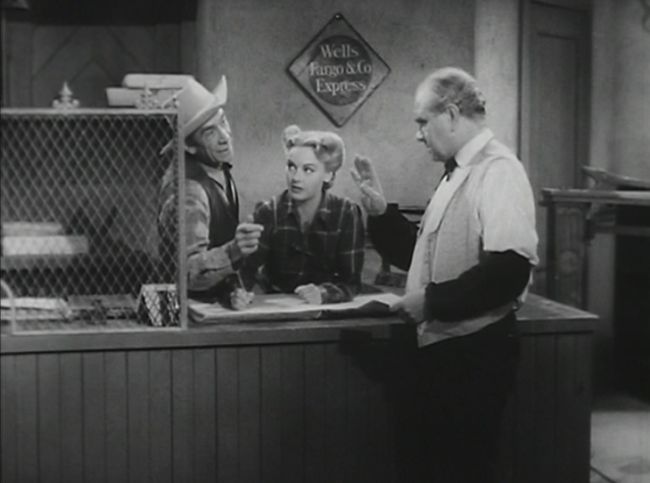 These two are actually Bill (Ernie Adams), a stagecoach driver, seen on the left and Dan (Joel Friedkin), a telegraph operator, the one on the right. Steve has planned ahead and set up a trap where he goes into the back room, pretends to reveal a secret while talking to the colonel and Idaho, then they jump out of the door to see which one is listening to their discussion. 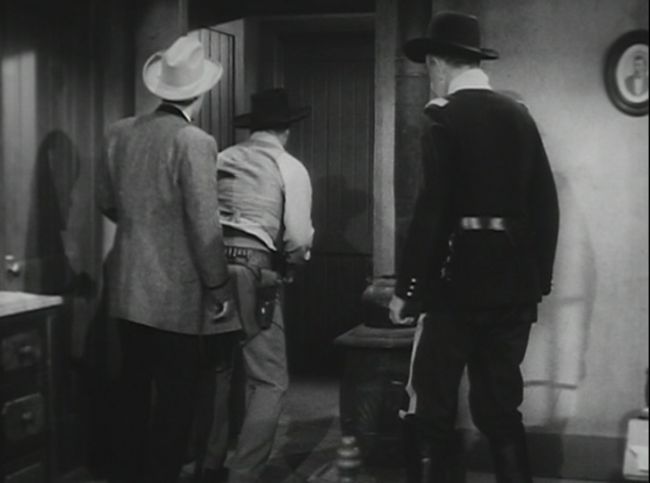 We then spend time following this mystery traitor around town but only seeing his feet, you know, to keep the mystery mysterious. Unfortunately for all of us, it’s painfully obvious who owns those feet. 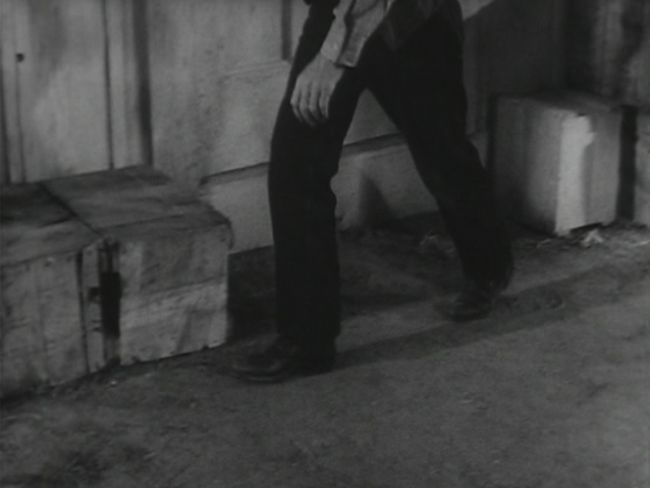 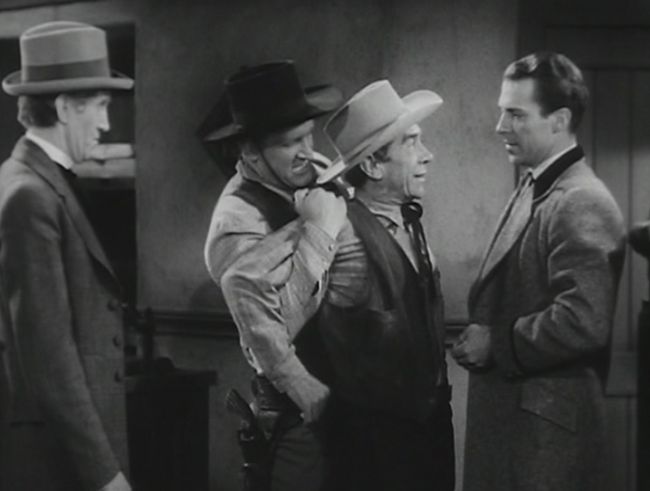 It’s Bill! Wait, we already figured that out because hurrrr.

Trina sets an ingenious plan into action to try to kill Bill (ha!) before he can talk. 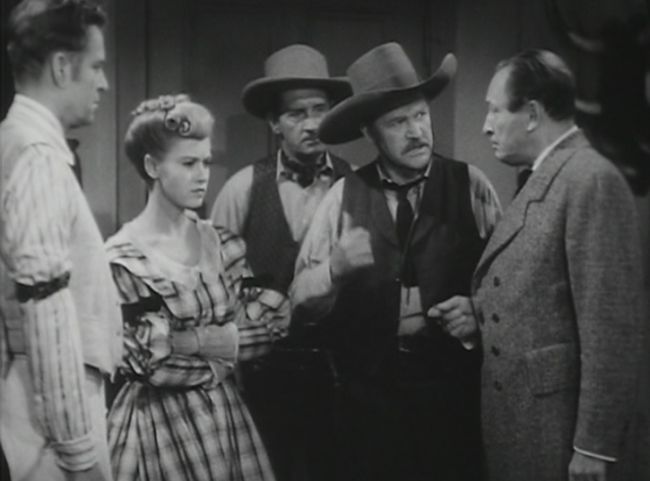 She sends Braddock out to Rock Ridge Rim Rock, then instructs her evil Prussian telegraph operator to pass on a message to Dr. Blair saying that old Mrs. Carmody wants him to stop by. Mrs. Carmody is apparently known for being more lonely than sick, so Doc takes Cathy with him, exactly as Trina had planned. On their way to Mrs. Carmody, Cathy is kidnapped! 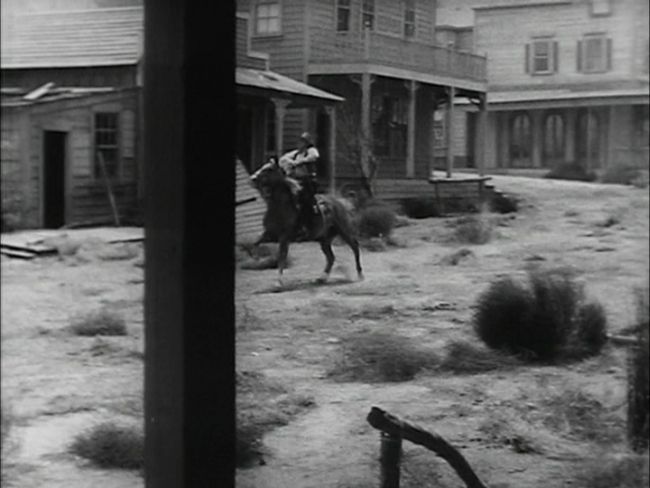 Meanwhile, Idaho is off investigating Ghost City, and I only mention this now because it’s the first time we’ve seen Ghost City in quite a while. Raiders of Ghost City, you say?

Doc comes shuffling back to the Wells Fargo to tell Steve that Cathy has been kidnapped, and if you have a moment, I highly recommend watching these few seconds starting here. Doc’s walk is hilarious, Steve’s yelp sounds like genuine “you are so stupid” irritation, and if you watch closely, you can see Dennis Moore’s lips move as Doc says his lines. 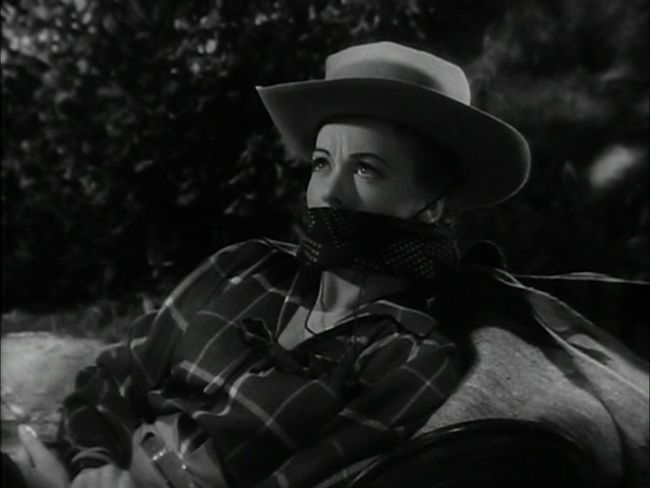 Cathy is bound and gagged and kept at an outdoor camp, because what else would you do with a female character other than make her a damsel in distress? Steve sets out and finds her quickly, though while he’s untying her, the henchmen see him. Slowly they all get out their guns without either Steve or Cathy realizing, except this guy, who is the henchman my husband has been waiting nine episodes to see: The guy who brought a knife to a gunfight. 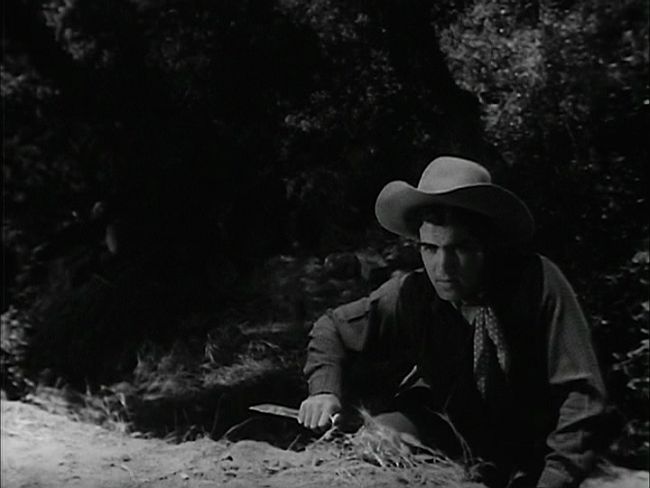 You can see his caricature in the upper left corner of the poster. We end Chapter Nine with this fellow stabbing down at an unaware Steve and Cathy. Will they survive? What will happen next? Are we about to learn the true meaning of fear? Tune in next week to find out!