Last week on Raiders of Ghost City! The lead bad guy, Count Manfried von Rinkton, gets killed dead by Idaho Jones, and after the dude only had a half dozen lines and four minutes of screen time, tops. I’m pretty upset that von Rinkton died so quickly, not because it’s indicative of the half-assed screenwriting on this fershlugginer serial, but because I had come up with the great new nickname “Der Dinkerplatz,” and now I won’t get a chance to use it. After Der Dinkerplatz (ha!) dies in a humiliating crumple on the cold cave floor, Idaho fishes Captain Steve “Bland” Clark out of the torture tub, who immediately rifles through some pockets and finds another 1752 coin (the same one used in previous episodes, but we’re not supposed to notice) and a business card leading to San Francisco. Meanwhile, the race is on to get Der Dinkerplatz’s (hahaha!) luggage and all the super amazing secrets everyone assumes are held within. Idaho and Steve get the luggage, but are pursued by Braddock and Rawhide, fresh after 26 hours of rest thanks to the doctor — on the side of the good guys, mind you — tricking him into swallowing a family size bottle of sleeping pills. When we last left our heroes and villains, they were holed up on one of the picturesque movie ranches of the California plains, shooting blanks at each other and peeking up over rocks like curious, sun-lazy lizards.

As always, feel free to follow along on zee YouTubez here.

Generally speaking, the recaps for Raiders are pretty well done, but lately Alex, Trina and whoever this telegraph code crackin’ guy is have been given scenes without any purpose other than to recite some stilted exposition for the benefit of a drowsy audience. Because how else can one create tension unless one completely undermines the threat by turning the bad guys into background characters, right? 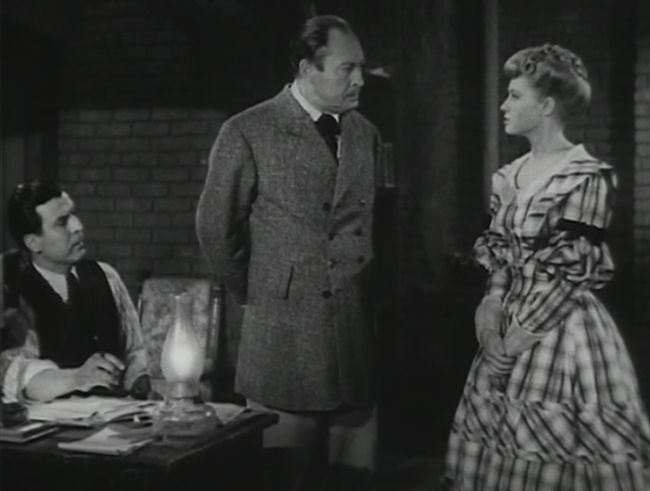 Maybe if those opening blurbs actually had anything to do with the serial, we wouldn’t need to relegate Alex and Trina to Exposition Town, and they could come back to Oro Grande and be menacing.

Out in the plains, Braddock and Rawhide start an avalanche to try to bury Idaho and Steve, who have von Rankin’s suitcase. What our little henchmen do not realize is that (a) that is a decoy bag, not the one they want, and (b) if they bury our heroes they’ll also bury the bag that they so desperately want. So it’s for the best that the avalanche does nothing but make Capt. Bland dusty and whiny. 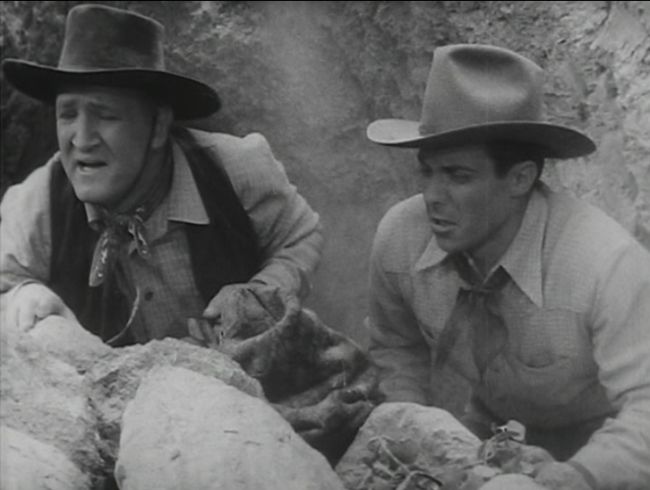 It looks like I caught Idaho in the middle of speaking, but I assure you he stands there with his mouth open like that for several seconds, because that is how he looks when he has to think things.

Last week I noted that I thought these scenes were filmed at Corrigan Movie Ranch. This week I know better: They were filmed near a rock dubbed “Doglips” by Electric Dylan Lad at the amazing Iverson Movie Ranch blog. He has matched up locations from numerous films to dozens of distinctive rocks and formations on what used to be the Iverson Movie Ranch. Every post is amazing: He’s found camera track from The Harvey Girls still lying in place, enormous rocks cemented together for a little movie magic, plus the tomb of Christ with some bonus Regis Toomey content. 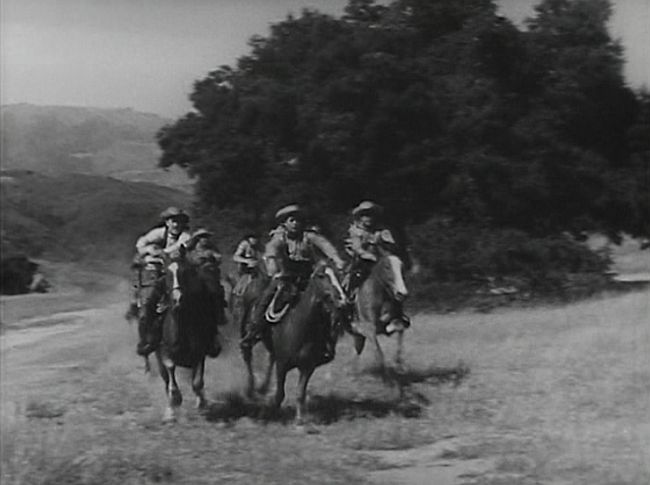 Idaho rides off with the decoy bag as the henchmen give chase. One of the more egregious attempts at killing time in Raiders are the excessive chase scenes; if I’ve learned anything from this serial, it’s that there is only so much exciting royalty-free orchestral scores accompanied by cowboys tearing through the plains on horseback that I can handle. That said, I am impressed that many of the actors do their own riding, though during more complicated stunts the stuntmen used are never the same size or even in the same color of clothing that the actors are. Great for snark, not so great for the movie’s integrity. 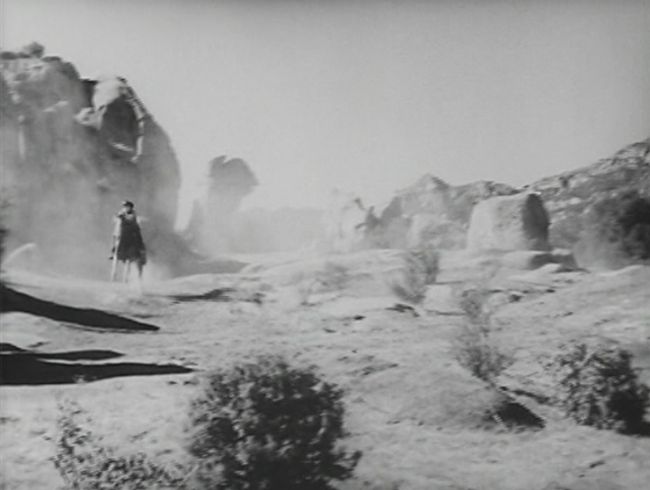 The chase takes Idaho right past this distinctive rock, just to the left of center above, the same one you can see used for the header of the Iverson Movie Ranch blog. Electric Dylan Lad has called the rock Wrench Rock or, in the early days of his investigations on the ranch, “Bobby.”

Idaho and his stunt double eventually get away from the henchmen, so he returns to the Wells Fargo, where Steve and Cathy are going through von Rinkton’s real suitcase. 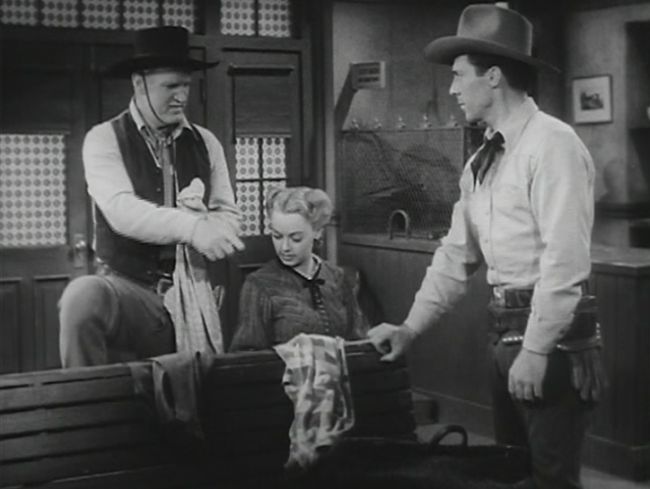 Idaho is briefly confused by clothing.

After approximately 62 hours of horseback riding, stock music and almost-avalanches, our intrepid trio discover von Rinkton wasn’t stupid enough to keep important Prussian papers in a suitcase entrusted to a series of Statlers and/or Waldorfs. You remember the resident Oro Grande Statler and/or Waldorf, the guys laughing over Rawhide’s near overdose in last week’s episode. Every Wells Fargo was issued a pair of these yuksters by law, thanks to legislation President Pierce forced through Congress in the spring of 1856 after enduring far too much competence and civility while traveling home after one of William L. Marcy’s legendary ragers. “No one could throw a party like a New York Whig,” Pierce famously told the Sacramento Union shortly before his election.

But enough of the history lesson. Steve decides that since his only clew is the business card for a coffee company in San Francisco that von Rinkton was carrying, he will visit San Fran. Thanks to some spies roaming around town, Braddock finds out about this trip and alerts Trina and Alex. Trina is sent to San Francisco immediately in an effort to beat Steve there, and we all try not to remember that Cathy owns the Wells Fargo and would know if and when Trina left town, and alert Idaho and Steve about the suspicious travel. 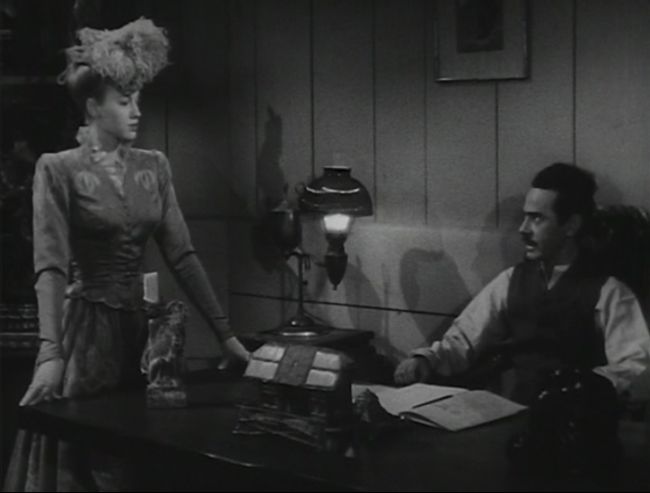 Since everyone in this serial is exactly as stupid or as smart as the plot requires them to be, Trina does indeed get to San Francisco first, and alerts the Prussian disguised as an American at the Rackerby Coffee Company that Captain Bland will be arriving forthwith. 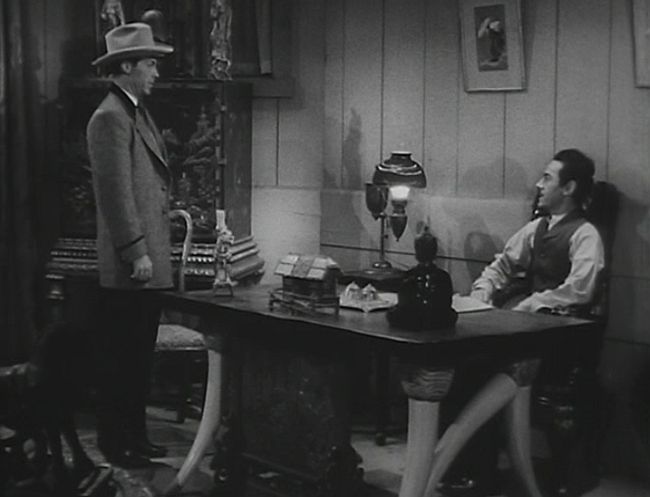 And arrive he does, where he stands straight as a board made out of straightwood imported from the highlands of Straightenstein, in front of this Rackerby guy’s resplendent tusk-adorned desk. Because when you think coffee, you think elephants. Steve pretends to be a member of the gold raider gang and gives Rackerby one of the 1752 coins he’s found on some corpse or other, and Rackerby opens the coin. They can open! The coins contain secret codes! Rackerby looks up the code in his codebook and we learn each coin code is paired up with a spies’ real identity. This is the most exciting thing that has happened since poor Regis kicked it while surrounded by a bevy of uninterested supporting players.

Immediately to the front of the desk is a trap door, which Blandy Straighterson obligingly steps onto at a key moment, just as he figures out Rackerby is involved in the gold thefts. 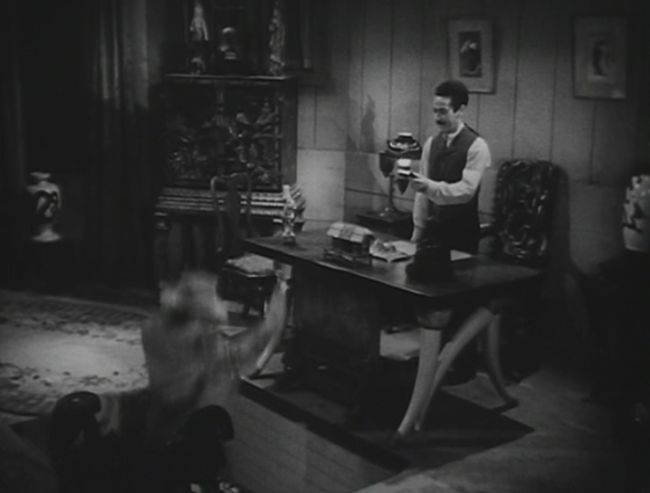 “Ooh, so that’s why there was a trapdoor-sized area of floorboards right here.”

Tune in next week to see something-something-Prussian-something!