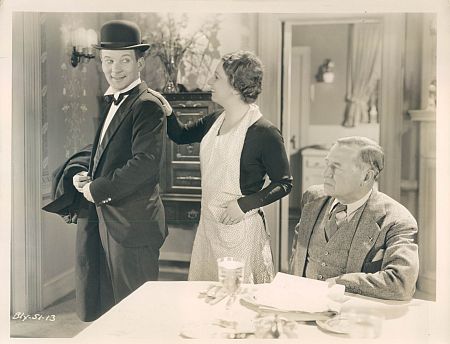 Welcome to a long overdue State of the Blog. What’s new for SBBN? Glad you asked.

The thought of doing another serial right now gives me the kind of headache Robert Urich used to talk about on the TV machine. However, I do have a plan for a new Thursday series, not recaps of a serial but a classic film series, which I hope you will enjoy. Er, look, let me be honest with you: I hope I enjoy it first, and secondarily, I hope you will, too.

I’ve been spending quite a bit of time on the Tumblr at Flashbulb Moment. It’s the same Tumblr I had before, repurposed into a random mishmash of all manner of things I like with a very vague Lester Bangs theme. There’s still some Old Hollywood posted over there, but also music, comic books, quotes, cheesecake, NSFW naughtiness, pretty much everything you can think of. It’s heavy on the Mountain Goats content right now because… guys, I think you’re old enough to know this about me: I get obsessed with things. Frequently. And whatever I’m obsessed with ends up on Flashbulb Moment. Check it out if you don’t mind the occasional nudity (not related to the Mountain Goats, probably) and randomness and Neil Diamond, because I am really starting to get my Neil Diamond on over there.

The picture to the up and to the over-there is El Brendel and a couple of people I was too lazy to look up (but I’ll feel guilty about it and come back to add their names in later, I’m sure) in the elusive Mr. Lemon of Orange. Thus, I have, for the first time on record, mentioned El Brendel and Lester Bangs in the same article. It’s a proud moment for me.

The Twitter widget I was so fond of on the SBBN sidebar is gone, probably for the duration of time as we know and can ever possibly comprehend it. Twitter changed their API for a blog widget and the result is… well, nothing available right now is even remotely acceptable for any webpage that wants to look professional. If you want to read my Twitter, you’ll have to do it the hard way.

And finally, the standard blah-blah-blahness applies to content on SBBN. I’ve been in a state of blergh (that’s the scientific term) for a while which I think I’m slowly coming out of, maybe, but this blergh (seriously I have a prescription and everything) is manifesting itself as reading and watching and consuming but not really producing that much. Also, work for Spectrum and a second outlet which hasn’t gone live yet always come first, but I love my blog and want to stop neglecting it, and if health and time and luck permits, I’ll do so.

I also love you guys, which I don’t say enough, or when I do say it no one believes me because I can only verbalize my thoughts through sarcasm or “Futurama” quotes, but I mean it. Thank you all for reading, and for the great comments I’ve gotten recently, and everything else. You’re wonderful.