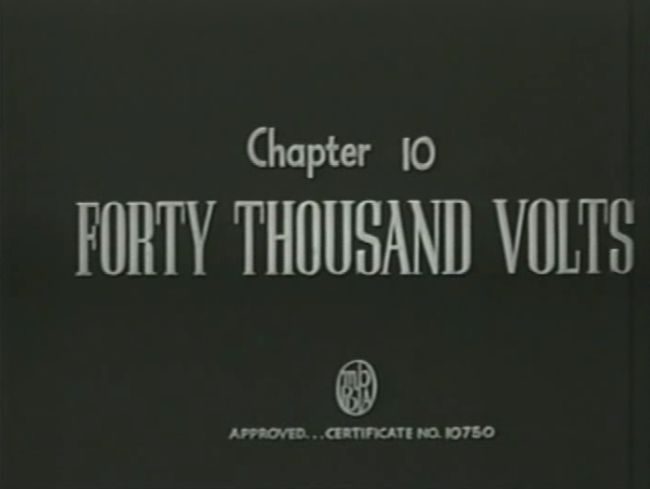 The Monster and the Ape #10
Forty Thousand Volts

For those of you playing The Monster and the Ape home game, I have some sad news: OV Guide’s website has been updated and they no longer host the serial, and I can find no free streaming sites for it. Also, I like you folks, you’re good people, which is why I don’t recommend you buy this, even if the places that sell it are also run by good people. Buy something else from them, something that’s not The Monster and the Ape.

Update: Blog buddy James Vance notes that the serial is available on YouTube with Spanish subtitles! You can find Chapter 10 here. Not that I would recommend it, but for you completists, there it is.
This is a short one, my friends, not because of the holidays, but because we’re in the midst of the most boring, ennui-inducing tedium known to mankind: the middle episodes of a crappy movie serial. Even our usually over-caffeinated recap narrator can’t muster a full sentence before sending us into the recap, which is exactly what we saw last week: Ken finding henchmen digging more tunnel at the end of an already-dug tunnel, using the Metalogen Man, and attempting to get the metalogen disk off the robot. A henchman remotely directs M-Bot to thonk Ken on the noggin (and the crowd goes wild) while a second henchman slams the handle of a detonator down, hoping to explodiate Ken with what appears to be about a tenth of a stick of dynamite. 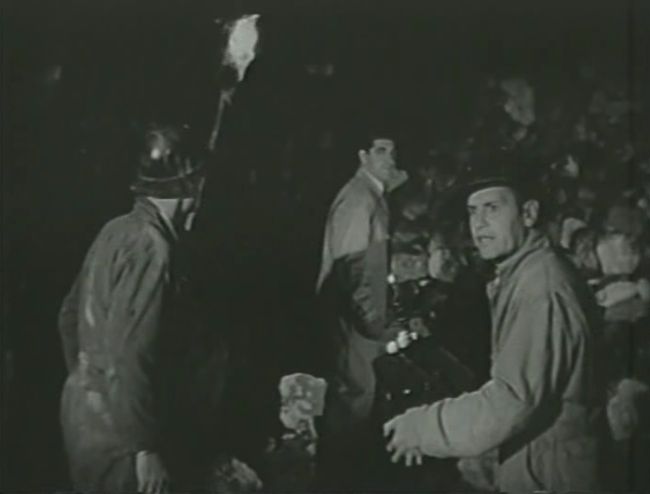 Flummoxed by a cave-in.

But the serial lied again, because Ken, as we see this week, got up and ran off 30 seconds before the tiny little explosion. The henchmorons are caught behind a cave-in, while Ken miraculously ran in the exact right direction to allow him to climb back out of the tunnel, and with the metalogcen disk as well an interesting rock in his pocket, too. As he tells Flash to start up the car, he remarks that he needs to call the police.

Lest you think Ken is starting to show some intelligence by calling the authorities, you should know that Ken spends his entire time with the police ordering them around, leading their searches, and being a smug know-it-all asshole.

By the time the cops arrive back at the paint factory and climb into the tunnel, the henchdips have taken the deactivated robot and hied themselves right the hell outta there, into a secret room that’s below the boarding house we saw in the last two episodes. They may keep the boarding house in the dark and dress the set differently, but it’s the same set as Ernst’s house. 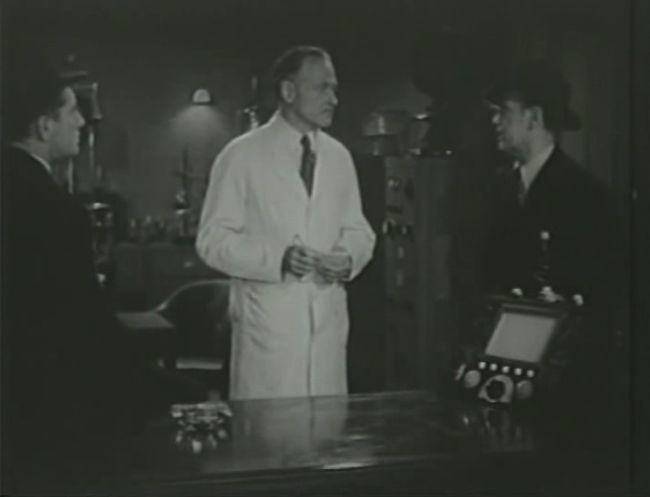 After returning to Ernst’s, the trio of henchduds have to explain why the robot is deactivated, why there is no metalogen disk, and why Ken is still alive. The script can’t even get the scenario straight, because when Ernst asks if the tunnel caved in, Flint says no, despite having just dug himself out of the cave-in earlier that day.

Ernst’s big plan is to let Ken and his comrades dig out the metalogen in the tunnel — that’s why they’re digging in the sewers, by the way, because metalogen is in there, which is a hilarious metaphor that I’m 100% sure no one in the writer’s room would have understood. Once Ken gets the metalogen, Ernst will just steal it from him. Yes, kids, Raiders of the Lost Ark was based on old serials. 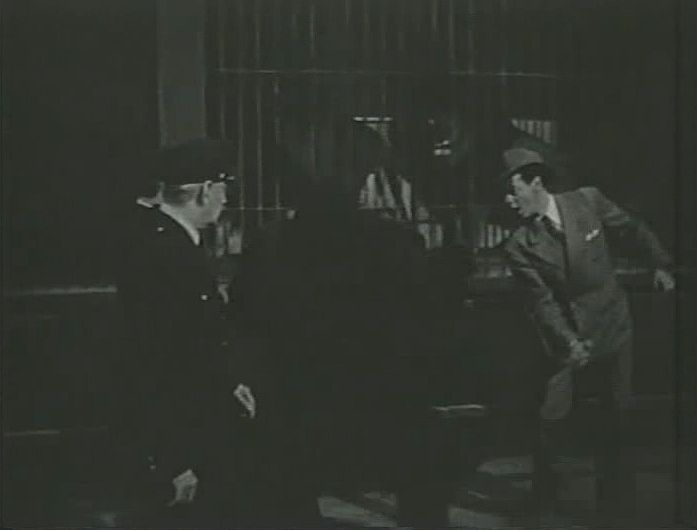 Robert Lowery in the midst of a rampage against Ray “Crash” Corrigan that looks decidedly unscripted.

Meanwhile, Ken’s brilliant damn idea is to condescend to the cops, who are still holding Thor the gorilla in the lock-up, by the way, and demand they put a leash on the monkey and follow him to see where he leads. He leads, of course, to the zoo, and it becomes clear very early on that actor Robert Lowery has no time in his day for Crash Corrigan’s antics. Crash, however, gets to beat Ken up a couple times before they finally drag him into his cage, and as irritating as Crash has been, I’m Team Monkey as long as he kicks Ken’s ass.

Ken then decides to drop by Ernst’s place, since he lives near the zoo, and he just strolls on into the house while the cops watch him break and enter. 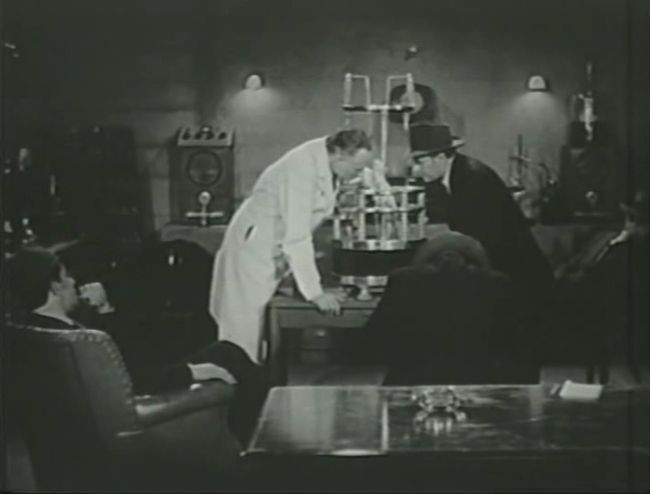 The baddies are in the midst of a really intense game of Parcheesi when they hear Ken break in.

They find him in the room with the Pit O’ Sparks, and a fistfight ensues. 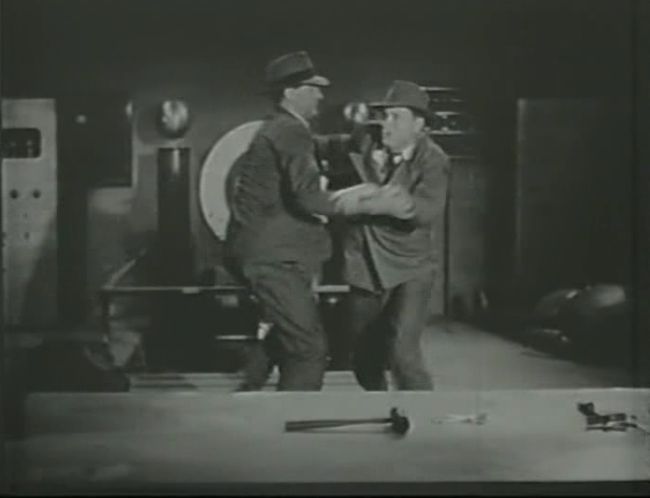 The stunt double on the left looks a lot like the double used for Bela in The Phantom Creeps.

Ken is knocked out and left laying next to the robot, and as the baddies leave, they turn on the Pit O’ Sparks and hope he’ll be zarked to death. 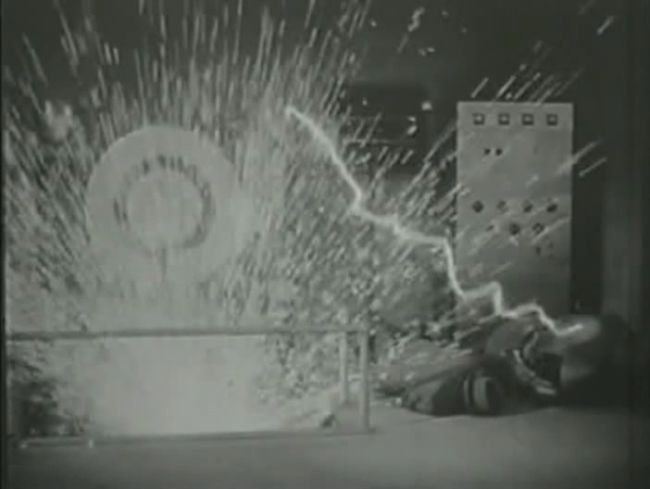 That’s it. I’m sure we’ll find Ken wasn’t near the sparks at all even though we see him, right there, covered in sparks. There is something so lazy and contemptuous about this serial, and I’m having a really tough time dealing with it this week. 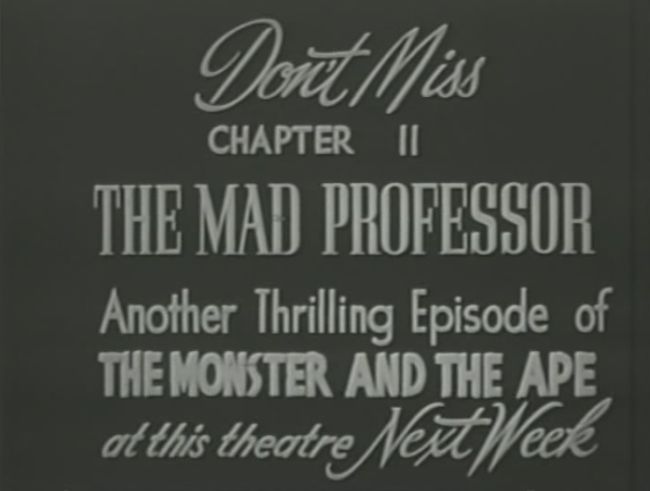 Do not promise me more Ernst and then fail to deliver, movie serial.