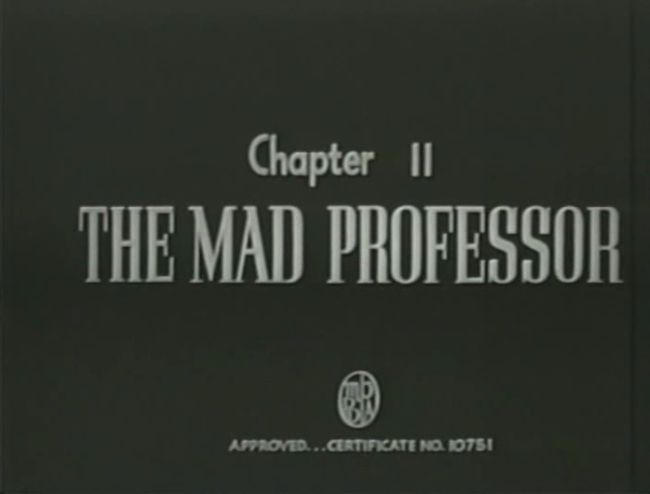 The Monster and the Ape #11
The Mad Professor

For those of you playing The Monster and the Ape home game, the Spanish-subtitled version can be found here.

Though we are finally on the downslope of this serial when the excitement is ostensibly about to get more, well, exciting, this chapter’s recap is a snooze. Our formerly excited narrator, who is now not just downtrodden but downtrodden squared, as Bill Hicks probably said first before the joke was stolen by Denis Leary, manages one sentence and sends us directly into the fistfight that concluded our last chapter. This time, however, we see some of the terrific film production in action: 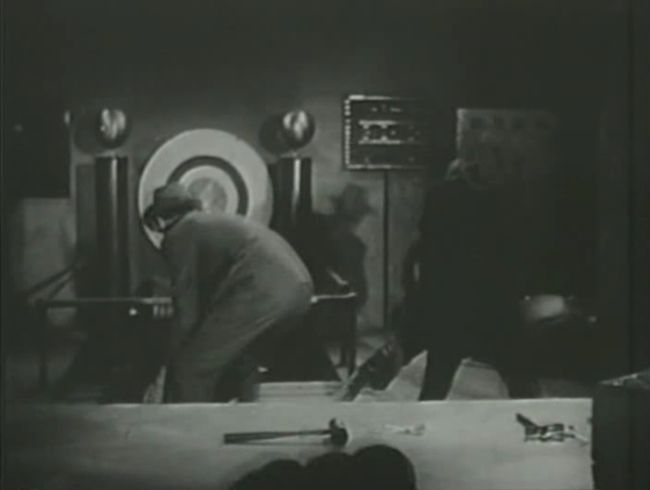 It’s hard to tell from this screen grab, but that black lump at the bottom is a stunt man who is supposed to be hiding underneath the table in the foreground. At least two stunt men can be seen scrambling in and out of the area under the table, switching places with the actors as needed, and even though it’s so obvious as to be distracting, a second take wasn’t done. Because why would it? That would have cost 37¢, far too much money to be spent on something like this.

During the fistfight, you can also briefly catch a glimpse of Ken’s striped boxers as he’s dragged across the floor. It’s a fight scene and you’d think he would wear briefs for… well, you know, but he’s in those baggy boxers that are so useless that he might as well be going commando. 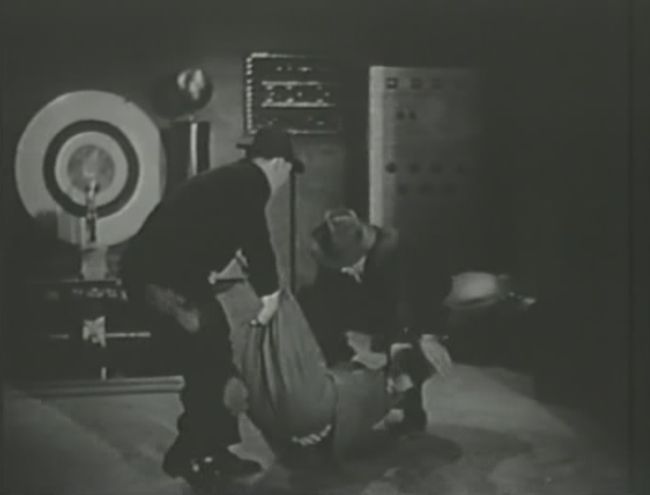 You’re welcome for that image, world.

As we saw last week, Ken was pommeled by henchmen and left to lay near — not in, just near — the Pit O’ Sparks ™ by the baddies, who were certain that would be enough to kill Ken off. And on a normal day, they’d probably be right; the guy doesn’t seem smart enough to not get his ass burned to a crisp by a cheap fountain firework that doesn’t even make cool sounds as it goes off. Luckily for him, the cops happen by and rescue him. 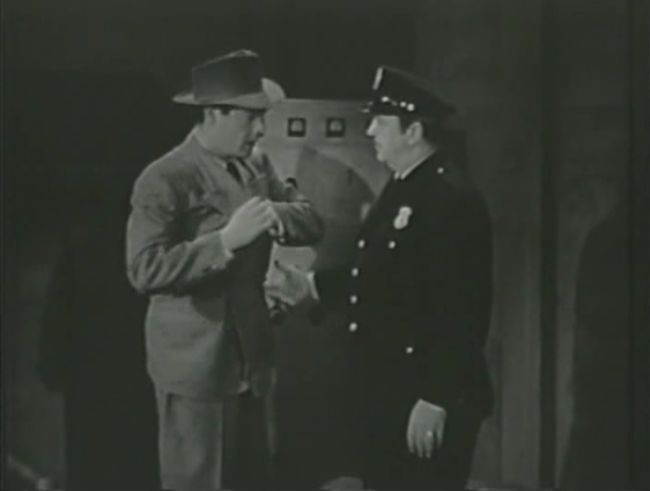 The officer is character actor Charles King, who appeared in hundreds of Westerns, quickie silents, shorts, and TV shows in his career. You might remember him as the reporter who gets sick at the execution in the pre-Code fave Picture Snatcher (1932), the alleged comic relief Sir Bors in the serial The Adventures of Sir Galahad, and he’s also a cop in (DUN Dun dunnn) The Phantom Creeps.

Ken starts ordering the cops around again and leaves them behind while he heads back to the lab, and makes arrangements to take the robot back with him. There is a secret door in the lab from which Ernst observes all this, so he knows exactly where M-Bot will be. Also, Ernst still has the controller, so having the robot isn’t really a huge score for Ken.

Back at the lab, Prof. Arnold mopes and Babs just stands there, neither of them even bothering to try to take the plot away from Sir Smugface. While there, Ken finds Flash with a stack of books he plans to put in his library (very obviously pronounced “libarry,” ugh) once he becomes a famous inventor. Interestingly, when asked about the robot, Flash tells Ken, “The rabbit is in his hutch,” which turns the rabbit-robot mispronunciation into a running gag rather than another joke about how people of color can’t pronounce words properly. But I have to take these moments as accidental; there is no way that the incompetents behind TMatA realized everyone regardless of color was pronouncing “robot” differently and decided to change directions with the joke.

Ken applies to the city for permission to dig in that tunnel, thinking Ernst’s men must have been there looking for metalogen. Ken’s presence keeps the bad guys from digging on their own. This is where we discover why actor Stanley Price all of a sudden showed up as Mead, a new lead henchman, a couple of episodes back: 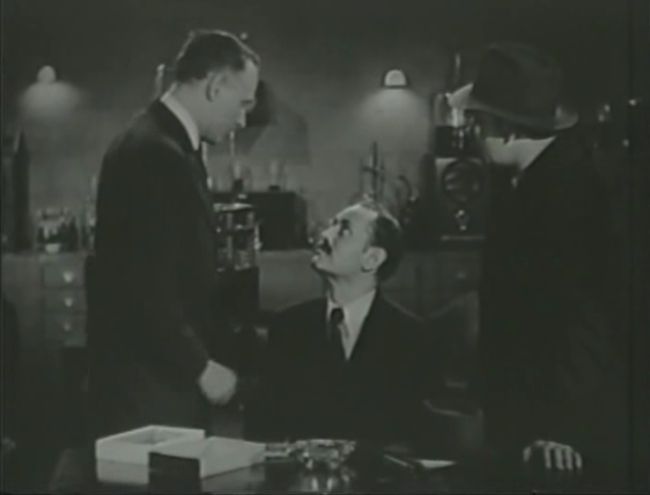 To have someone Ken hasn’t seen several times already, who can be disguised by Ernst to infiltrate the dig. Now, despite this episode being called “The Mad Professor,” the recap and this short scene of Ernst playing with his fake moustaches is the only time he even appears. Ernst plasters faux facial hair on Mead and gives him an eyepatch, calls him “Sam Nelson” and sends him on his way.

I should note that I’ve been saying Mead was played by Eddie Parker for a few episodes, mainly because I can’t see this serial well enough to discern the difference between two character actors with the same bland faces, and the IMDb can’t be definitively relied on. Once the actor took off his hat in this chapter, though, I confirmed Mead was Stanley Price, so I’ll be going back to correct that in previous recaps.

Mead as Fake Sam Nelson gets a job from Ken without any trouble at all, and Ken immediately directs Fake Sam to the blasting powder. Now, I am not a professional dinkbrain like Ken, so perhaps I do not know how these things work in the real world, but a guy without references and wearing an eyepatch doesn’t seem like the kind of person you’d want to hire as an explosives expert. Even if he has experience, it’s experience that left him without an eyeball. To no one’s surprise, the newly-hired Fake Sam tries to blow Ken up, misses, and a fistfight ensues. 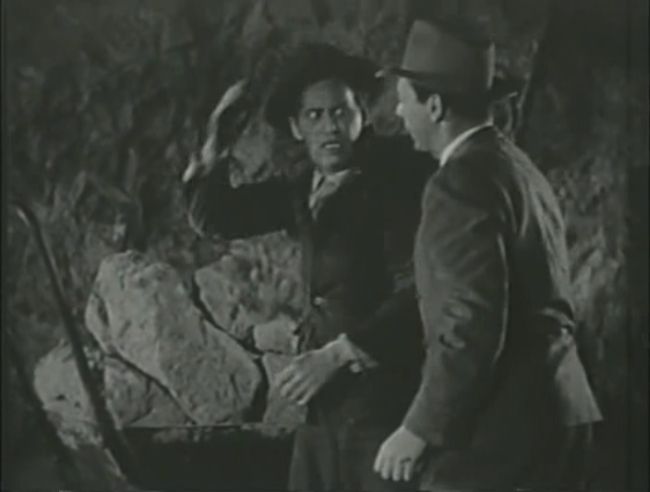 The best part is Mead’s obvious “ssshhhhiit” as Ken drags him off to the cops. It’s at 14:48 if you want to hear it for yourself. The audio on my version is better than the YT version, but it’s still unquestionably in the take, and it sounds like Price realized what he was saying in mid-word and tried to pull the punch, so to speak.

Let’s just think about this for a second: The studio was so disinterested, the director so lazy, the budget so small and the censors so unwilling to even watch this cinematic disaster that profanity completely unknown to film in 1945 got through, and no one even noticed. Best I can tell, no one has noticed since then, either. I’m assuming everyone dismisses it as more of a grunt than an actual word, but I hear the “t” in it, and I don’t think it’s just because I’m a foul-mouthed broad.

Mead promises Ken info in exchange for leniency, but Ken’s pretty pissed off, what with a bunch of workers lying unconscious thanks to Mead and all. But when he promises to give up Ernst’s location, Ken softens, and Mead leads Ken into the secret tunnels of Ernst’s home… and right to a trapdoor on top of a water pit. 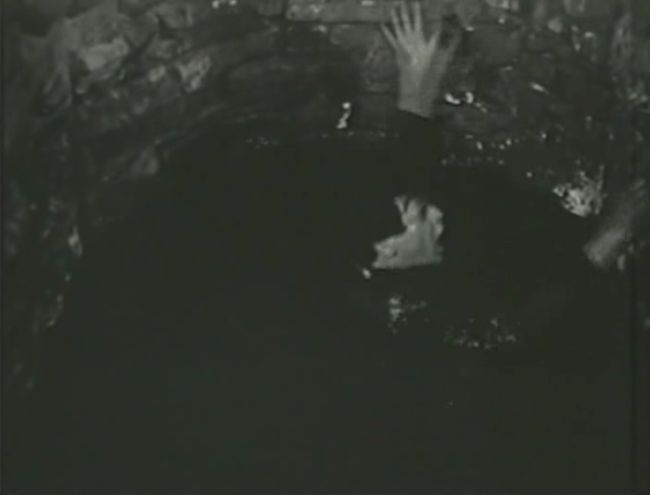 It puts the lotion on its skin. It does this whenever it’s told.

Last we see, Ken is glugging underwater, unable to climb out of the pit. Gasp. Oh my gosh. Will he survive. 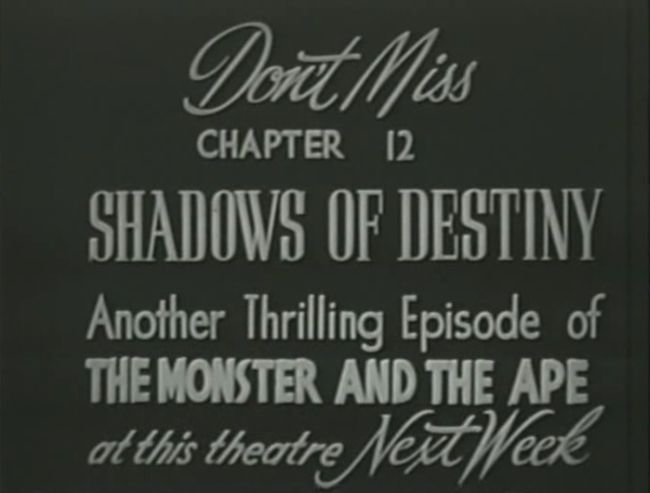 Tune in next week when maybe someone besides Ken has something to do.