The Monster and the Ape
Episode 2: The Edge of Doom

When we last left everyone who bothered to show up for the first day of shooting on The Monster and the Ape, Ken was laying face down in a pit of sparks, Babs was stuck behind a false wall, Prof. Arnold was lying mostly unconscious on the floor, and Prof. Ernst was driving away with the remote control for the robot. Nobody else was paying any attention. 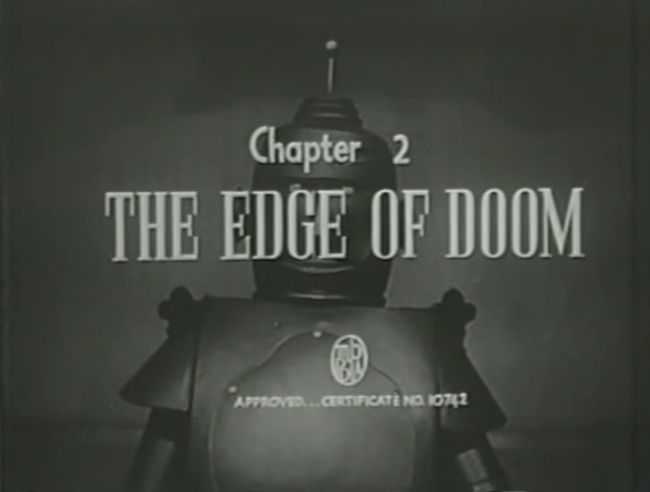 Each episode begins and ends with a recap featuring an overwrought narrator accompanied by organ music, so I always expect another episode of Veterinarian’s Hospital (“The continuing story of a quack who’s gone to the dogs!”) but am always disappointed (“Oh, wow, Dr. Bob!”)

Yeah, and now you wish you were watching The Muppet Show too, doncha? Haha. Suckers.

Worry McNarrator segues us into a prelude that consists of nearly five full minutes of last week’s episode. Fortunately, this scene was shot all at once, thus the break between the two episodes is achieved with fluid editing, rather than by just turning the camera off in the midst of a punch and shouting, “Come back tomorrow!” That makes for a more pleasant segue experience than either Phantom Creeps or Raiders of Ghost City could provide, though I maintain Monster and the Ape including five damn minutes from last week’s show is four damn minutes too many. 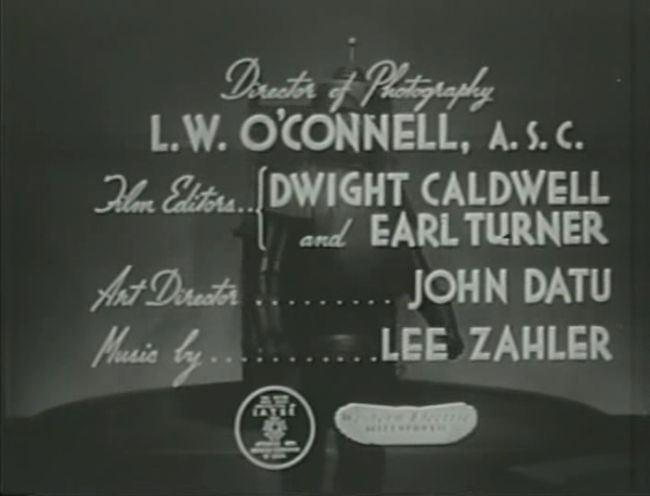 Still, this serial is competent; director Howard Bretherton spent most of his career doing B Westerns, though he did direct the Stanwyck pre-Code Ladies They Talk About, which has achieved some notoriety in recent years. Writers Royal K. Cole and Sherman L. Lowe worked together frequently, usually on crap with titles like Valley of the Zombies (1946). And that’s it for the behind the screen talent, guys. That this serial isn’t just a bunch of starlets standing in front of a blank blue screen is the most minor of miracles. 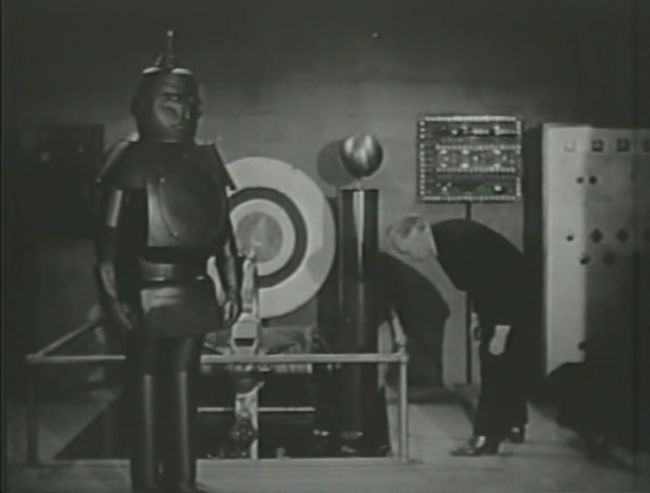 Finally, our five-minute wait is over — on to the new footage! Professor Arnold sees Ken in the Spark-O-Matic 2000 and turns off the sparks, while the robot… does nothing. It apparently cannot move at all without someone at the remote controls. Meanwhile, Babs shoots her way out of the secret room behind the shelves… 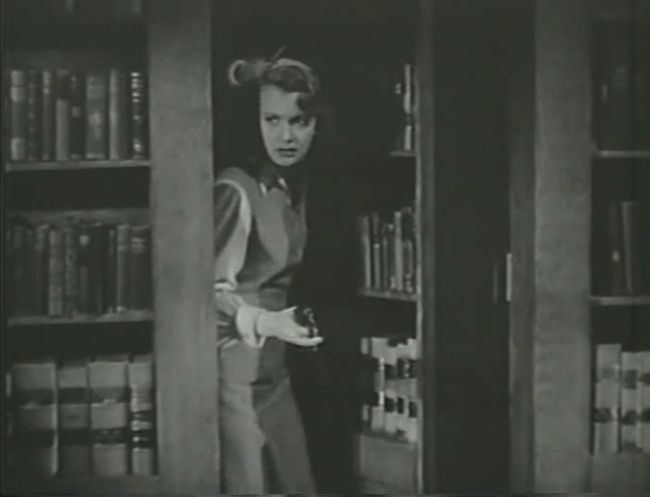 While Ken goes back to get his fedora from the spark pit. 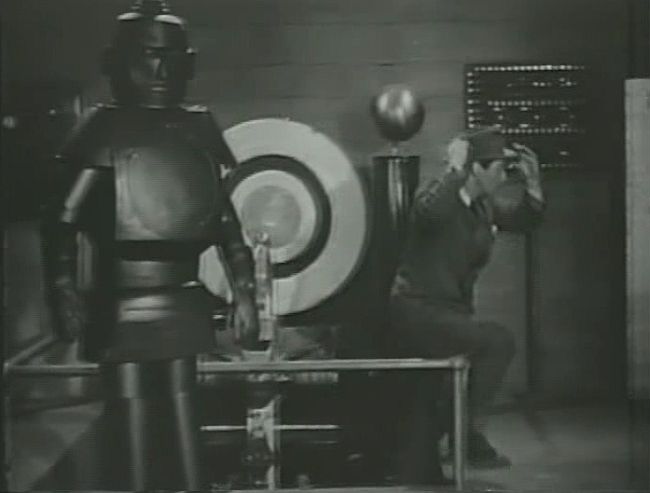 Compare and contrast, if you will, the fair damsel’s pluck versus our alleged hero’s love of hats.

After a quick search, Arnold and the gang discover the robot is still there in Prof. Ernst’s house, but the control unit has been taken by Ernst and his henchmen, which means they can’t control M-Bot. 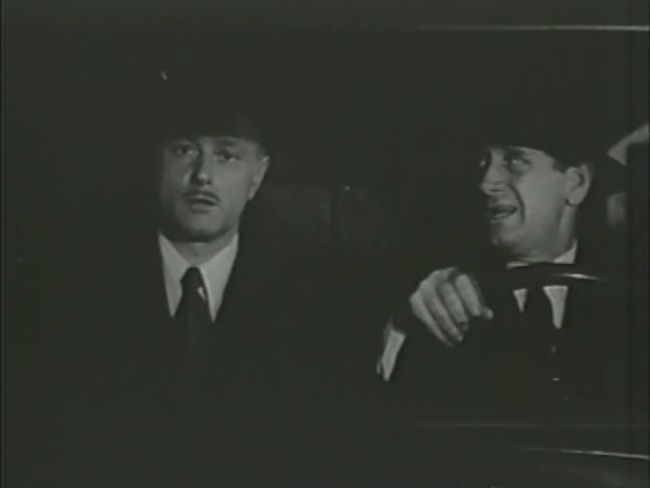 Another quality Columbia Pictures production, ladies and gentlemen. MacReady can be caught looking into the camera quite a bit in this serial, almost as often as Joe Sawyer closed his eyes during Raiders of Ghost City and Regis Toomey took a damn nap in The Phantom Creeps. In Monster, it’s too early to tell whether this is a legit thematic device or major incompetence. Jack Ingram’s face tells you what he thinks about it. 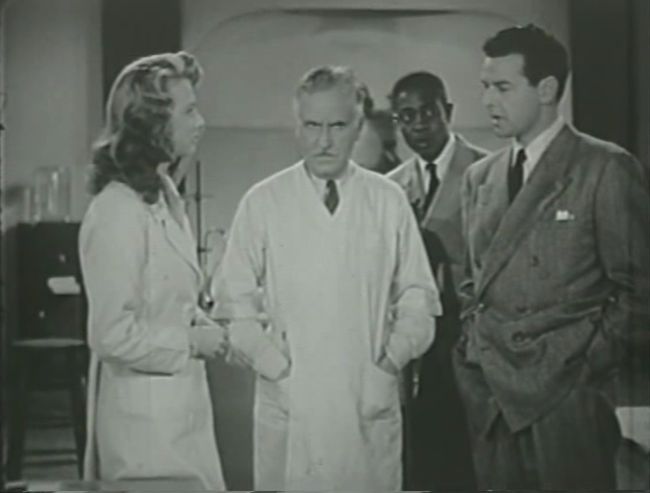 Our good pals the scientists somehow get M-Bot back to their lab despite not having the control unit, and start tinkering with the feller while Ernst, back at his evil evil lair of evil, informs henchman Dick Nordik that he’s placed a secret transmitter inside the robot so he can spy on the good guys. 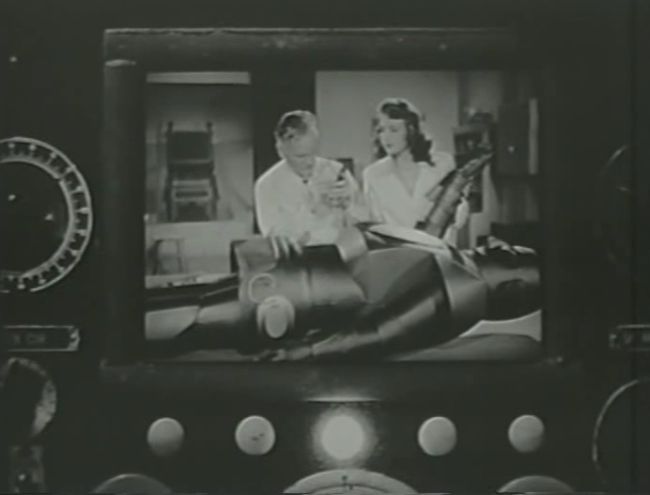 Now, why this transmitter films from 10 feet outside the robot when it’s been implanted inside the robot is a puzzle best left to theologians to decipher.

After a meeting of the minds at Scientifico de la Roboto, a plan is hatched to find more of the non-reactive metal obtained from meteorites, as used in M-Bot. A robot made out of a meteor? My, that does sound familiar. The only metalogen left on earth is coincidentally in a museum just down the road, so Ken decides to check on it. (We don’t see him, but I imagine him at the museum, nose pressed into a display case, staring intently at a chunk of pyrite.) And finally, Flash (Willie Best) has a decent line: A joke about how he got his best girl some “non-reactive” perfume but it didn’t work. Ha ha, she resisted his advances! I think. Guys, I don’t get that joke.

Ernst, overhearing the location of the metalogen, grabs his henchmen and his monkey and heads on out. Ken has returned to his own lab by then, claiming the meteor is safe and sound, because he doesn’t realize Ernst has bugged M-Bot. Arnold finally realizes it, though: 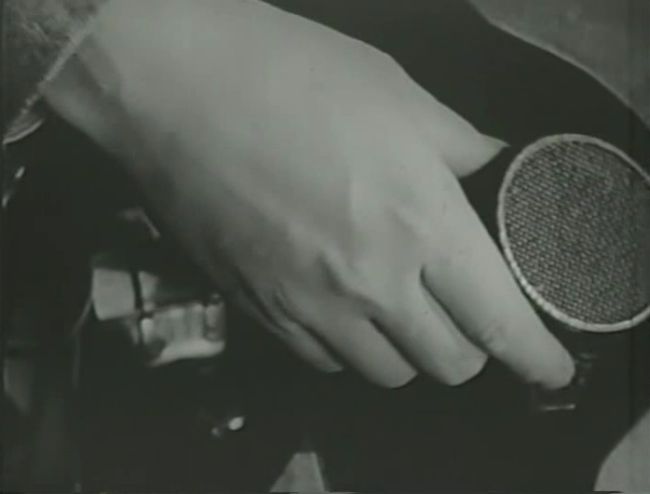 Yes, my friends, it took them three hours of tinkering inside the only cavity this robot possesses to find a cat-sized transmitter that had been laying on top of the wiring all along. Ken jumps into the laboratory car, Flash the chauffeur already in the driver’s seat, and they race back to the museum just in time to find Ernst, henchmen, and our best friend Thor the Gorilla stealing the metalogen. 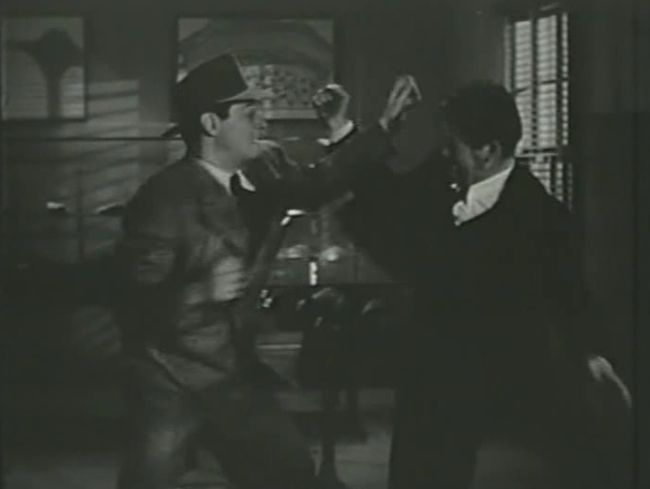 Flash overhears a gunshot, so digs out a razor from his pocket and goes quietly into the museum, intent on helping Ken. Instead, he gets grabbed from behind by Thor! 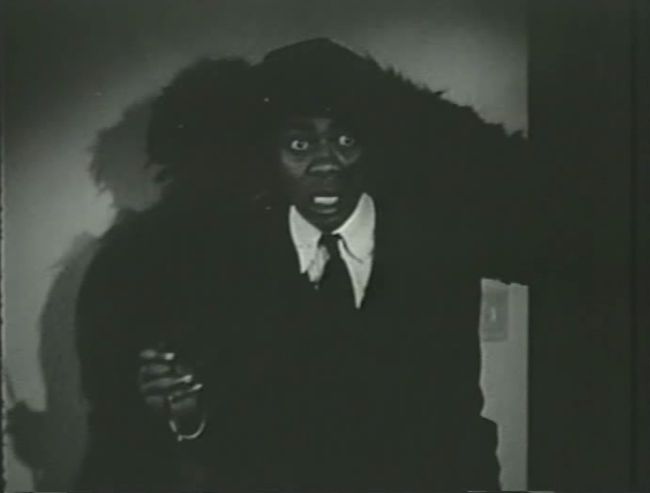 The initial look on Willie Best’s face turns into that racist wide-eyed thing one would sadly expect from this serial, but a split second later his eyes roll entirely into the back of his head, then they cross, then he’s struggling and looking so scared that I was a bit freaked out. No one would blame Best for having a fear of stuntmen in gorilla suits made of human hair, is all I’m saying. 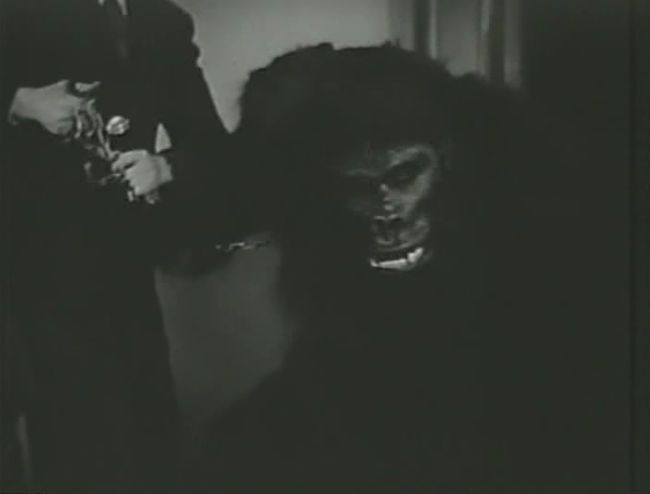 Our best monkey pal here is played by none other than Ray “Crash” Corrigan, of Undersea Kingdom fame. He began his Hollywood career in monkey suits — the furry kind, not the Cary Grant kind — and had a brief bit of success playing his Crash Corrigan persona in serials and films. Soon he was back in a gorilla suit, though he apparently made most of his money from renting out his Corriganville Movie Ranch to films, TV shows and reenactments. He owned his own suit, tailored to fit him, made out of human hair and with a flexible face that was more realistic than other suits of the day. (“Of the day?” Like gorilla suits in 2013 are super realistic? What am I saying?)

The bad guys get their meteor and their monkey and make a clean getaway. Ken drags his beaten-up ass off the floor and sees Flash unconscious nearby, and tries to wake him up. Before Flash completely comes to, Ken tells him to stay there, he’ll be back for him later. Ken then jumps into the car and gives chase after the baddies.

Then shit gets real, my friends. Just as Flash wakes up, the police arrive and see a black man alone in a trashed museum with a razor, and arrest the hell out of him. “You can’t do this to me!” protests an innocent Flash, to which the cop replies, “Oh, yes we can,” and carts him off to jail. 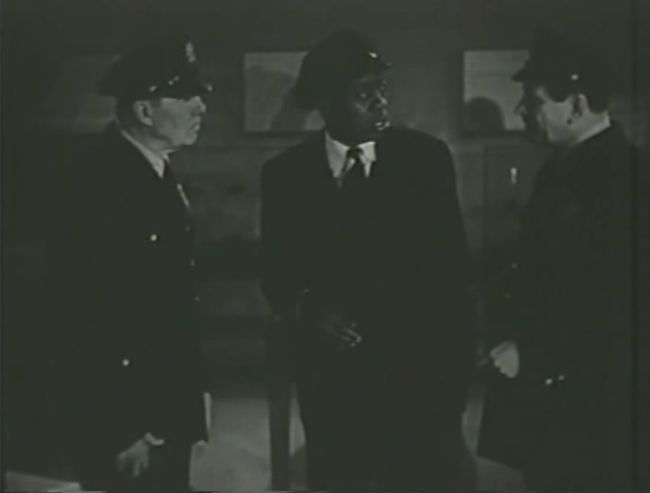 Ken, who is supposed to come back for Flash, instead drives off a cliff after being momentarily surprised by the sight of the car he was chasing after. 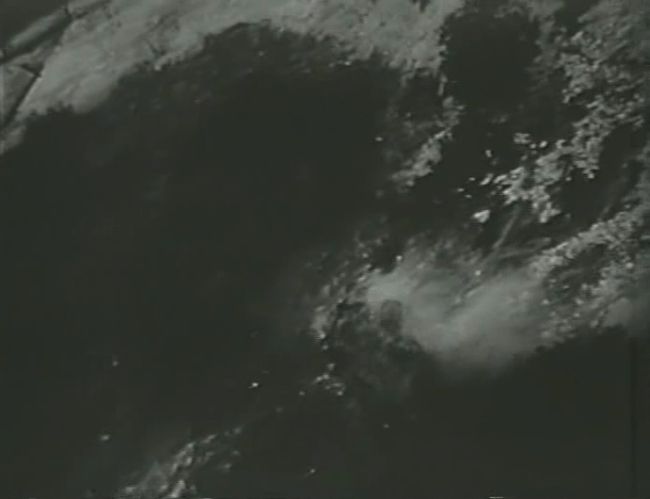 I promise you, there is a car in that screencap. Look inside the cloud of dust for four little tires up in the air like a cat that wants its tummy rubbed. The bigger point we should be taking away from this, however, is that Ken has the driving skills of a ‘possum without thumbs. He deserves to be at the bottom of that cliff.

In our exciting concluding summary, no mention is made of Flash’s predicament, which leads me to believe it will be played as a knowing joke: “Ha ha, yes, of course,” the audience will say as they puff on their pipes, “Black men are arrested all the time. This is funny because it is true.” 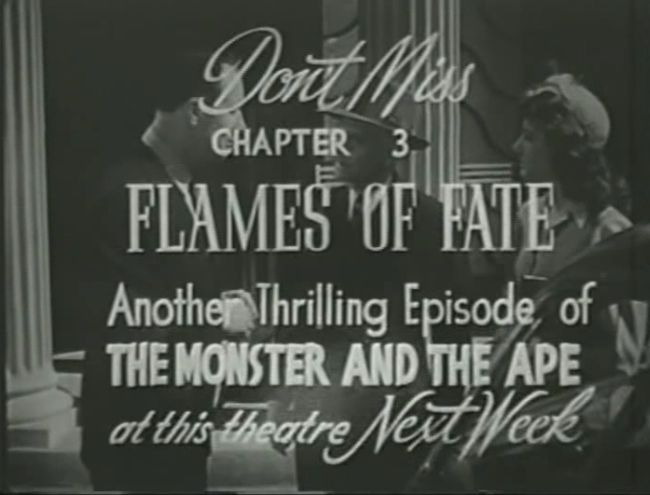 Tune in next week when I probably decide to full-on hate the shit out of this serial, and blog accordingly. Bring your helmets.

Update 10/13/13: Duplicate picture removed. Thanks for telling me about that, guys. OH WAIT. (Sheesh, minions these days.)