The Monster and the Ape #5
Rocks of Doom 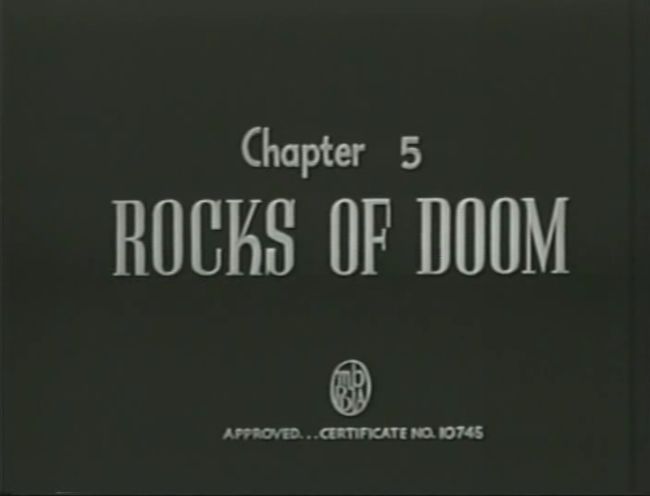 Sorry for the skipped week, and thank you all for your patience! Today’s chapter is one filler-ific episode. So much filler. All potatoes and no meat, if you will. For those masochists among you who are following along with the OV Guide version, this episode starts at about 1 hour 27 minutes in. 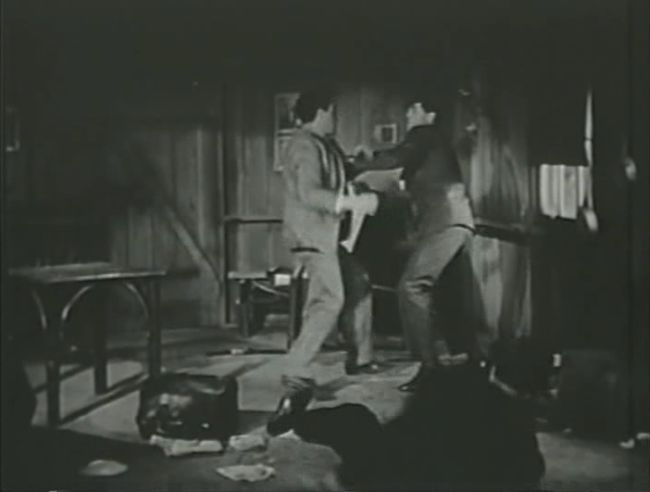 We pick up very near where we left off, which was immediately post fistfight, moments before Ken was allegedly obliterated by an explosion. There’s nothing particularly interesting about the fistfight, except our excitable recap narrator announces his usual, “Suddenly!” about 45 seconds into the fight already in progress, which is a type of “suddenly” I was not previously familiar with.

Anyway, as predicted, Ken actually left the cabin before it blew up, contrary to what we saw the week before. Not only that, Ken jumps out a window without even losing his hat — Raiders of the Lost Ark was not conceived out of thin air — and after the explosion, Dr. Arnold just saunters over with mild concern. Debris would be falling everywhere, the remains of the cabin with its now-dead henchmen would be burning furiously, the Metalogen inside setting off small explosions, but do we see this? Nope. Instead, we get a nice day, bit of a breeze, Ken unmussed save for his tie slightly askew.

You know what? I’m not going to show this. Not even going to waste time on this fuckery. But I will tell you one thing: Chapter four’s cliffhanger may have been bad, but the end of this week’s episode is just completely audacious. It is straight-up fucking with our minds at this point… but I get ahead of myself.

Our genius heroes realize the Metalogen was in the cabin and it, as they also assume of the two henchmen inside, have been blown to dust. Do they alert any authorities? Do they even glance over at the building with any sort of concern over the two human beings trapped inside? Do they perhaps concern themselves with the threat of forest fire? 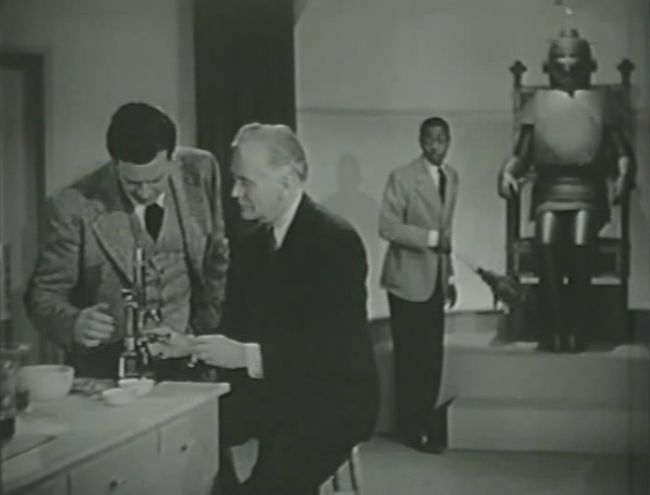 Ha ha, no, of course not. They go back to their lab and look at stuff through a microscope. What are they looking at? No man can say.

Meanwhile, their butler-slash-chauffeur Flash dusts the robot, which he insists on calling a “rabbit” because racism. What’s curious about these scenarios is Ralph Morgan never gets in on making fun of Willie Best. The other two nitwits chuckle with condescension, but Ralph always delivers his lines straight; when he says Flash is merely scared of the robot as usual, he’s just telling the damn truth, nothing more. It’s unclear whether this is characterization, low-key and inattentive acting, or a deliberate statement.

As a data point toward the “inattentive acting” theory, Morgan as Prof. Arnold is also completely unfazed by famous geologist Dr. Draper and his very cranky attitude. Dr. Draper was introduced last week in a brief preview clip for this episode, and he was also on the promotional material for last week’s show, so clearly we’re supposed to be very impressed with this man. 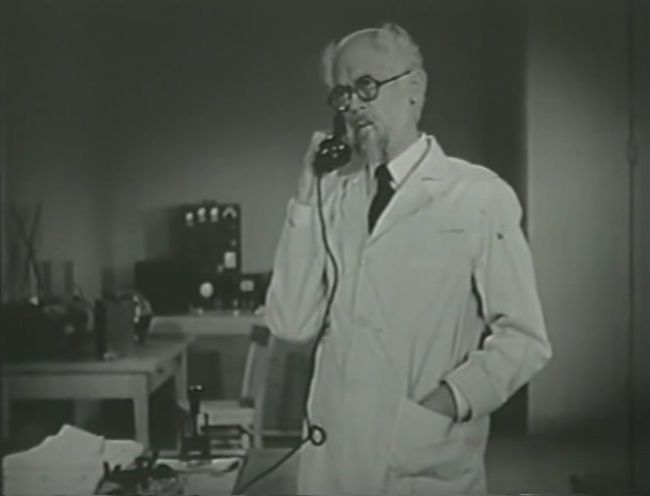 This man, however, is a whiny little science diva. Through nine excruciating minutes, half the run time of this episode, Dr. Arnold and Ken fuss about their lab until Babs arrives with the paper and informs them of Dr. Draper’s new invention which can detect the presence of meteorite amongst the workaday rocks that litter our puny Earth landscape. Because when Metalogen from a meteorite is the most important thing in your life, you don’t keep up on the news about it, you rely on friends and relatives to casually inform you whenever they get a free moment to drop by. This newspaper business takes up four minutes; Dr. Arnold calls Dr. Draper, who grouses incessantly but finally agrees to meet at their laboratory, which takes up two more. 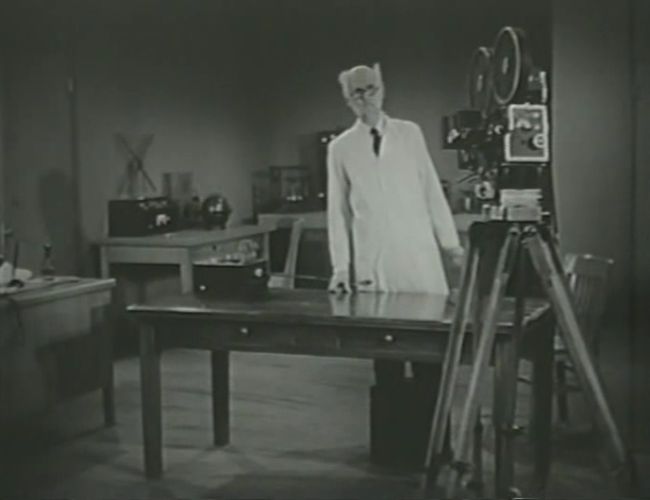 During these final three minutes of cinematic purgatory, we’re treated to Dr. Draper faffing about in a soundless sequence, where he does little more than turn on a camera and almost fall over for no reason. Inner ear problem, perhaps, or not enough vodka in his bloodstream. This interminable scene ends when Professor Ernst shows up and conks Dr. Science Diva on his head, shoves him in a closet and takes the detection device, all the while not knowing the camera is recording everything.

Ernst disguises himself as Draper and heads out to Prof. Arnold’s place, where he pulls a diva ‘tude as part of his disguise, yet doesn’t manage to change his accent. Because who could possibly recognize George MacReady’s voice, right? It’s so bland and unexceptional. 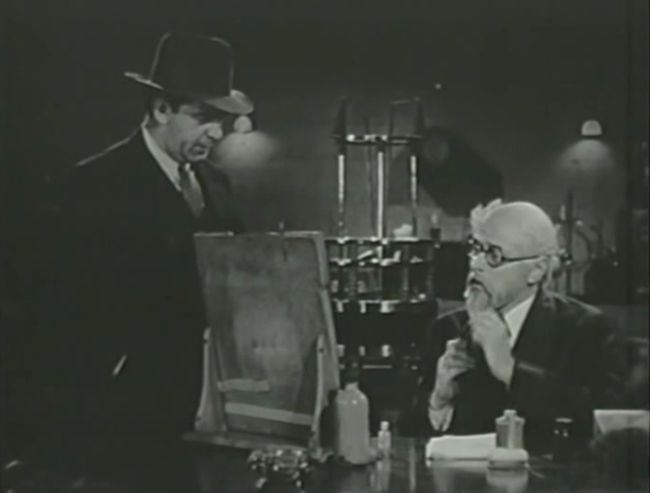 George MacReady surrounds himself with a half dozen bottles of high-grade pharmaceuticals to get himself through this scene.

The interesting thing, for a really low value of interesting, is that the guy playing the real Dr. Draper is not credited. I have no idea who he is, and apparently no one else does, either. There is not a book, blog nor newspaper article that mentions this character, everyone apparently assuming the original Dr. Draper was MacReady, when he wasn’t. That’s unfortunate. The least someone should get when they end up in The Monster and the Ape is credit. Jeez, did this dude at least get a paycheck?

Ernst as Fake Draper travels to Prof. Arnold’s, divas about a bit, then settles into a private laboratory and immediately calls Dick Nordik, telling him to take that giant sassy ape of his to a pre-arranged location near a quarry. ETA: My BBFF Ivan informs me that tomorrow would have been actor Jack Ingram’s birthday! Happy birthday, Jack… 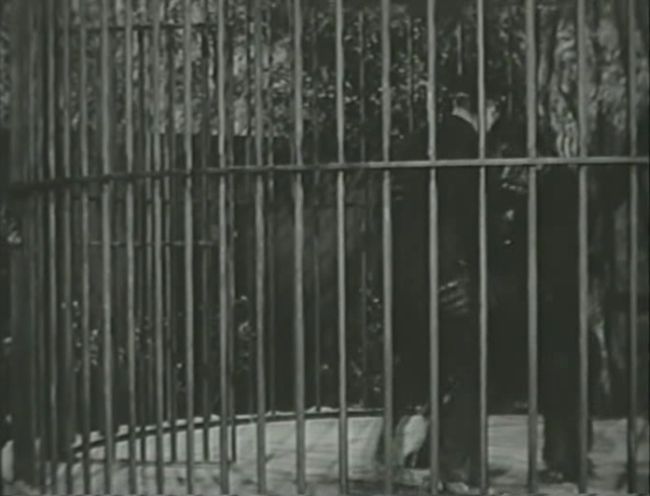 …and sorry you  have to put up with this cray-cray guy in a monkey suit. In more scene-stealing shenanigans, Crash Corrigan grabs Dick Nordik’s ass. Ugh, every time I see Corrigan fucking around in that ape suit I want to punch him, but as my husband says, why bother, that suit will just absorb the blow.

Ernst tricks Ken and Prof. Arnold to go out to the quarry, promising to demonstrate his Metalogen detection device, while Nordik drags the ape out of the zoo, telling everyone he has to go to the vet for his asthma shot. That made me laugh, but I suspect it wasn’t meant as a joke. Crash tries to steal the scene by smacking the single-line bit player who, in what I am positive was an unscripted moment, comes perilously close to whacking him with a rake. I’ll bet that would penetrate fake monkey fur.

The wrap part for Monster and the Ape must have been as uncomfortable as the one for Oklahoma!, where Gloria Grahame had stepped on lines and literally shoved and punched people out of the way so often during filming that not a single person would speak to her anymore. 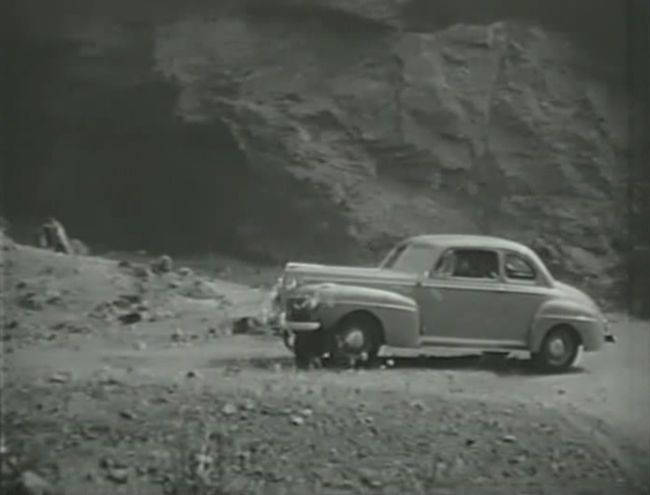 I’m not great with locations, but this looks like Bronson Canyon to me. There is a touch of spliced-in stock footage that seems like Iverson Ranch, or somewhere similar, too.

As Prof. Arnold, Ken and Fake Draper stand near some shrubbery while fiddling with their detectors, Nordik drags the ape up a nearby hill, which somehow no one notices. Why would anyone notice a fussy, ill-tempered giant ape in the middle of a quarry, anyway? Those places are just crawling with apes. 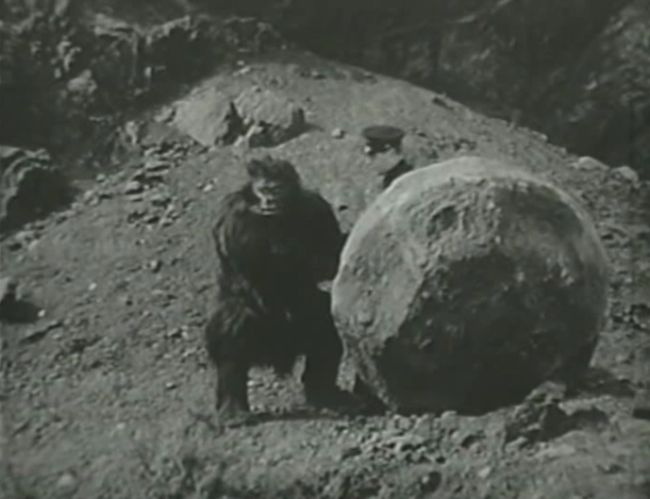 This rock is so round. I wonder what will happen with this rock, which is very round, and poised precariously on the edge of a steep slope.

Ernst leaves Arnold and Ken as he goes to get a missing part for his detector, and the ape shoves the rock down the hill. Arnold gets away but Ken falls, I guess because he was having trouble running in a short skirt and high heels. Here is Ken as the rock is making its way toward him: 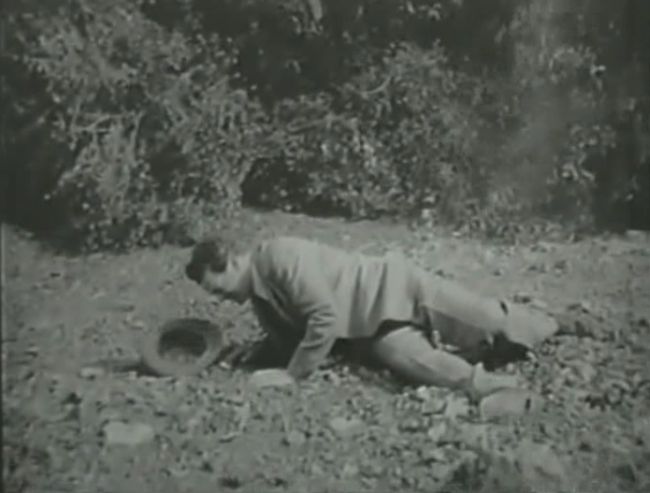 And here he is as the rock falls: 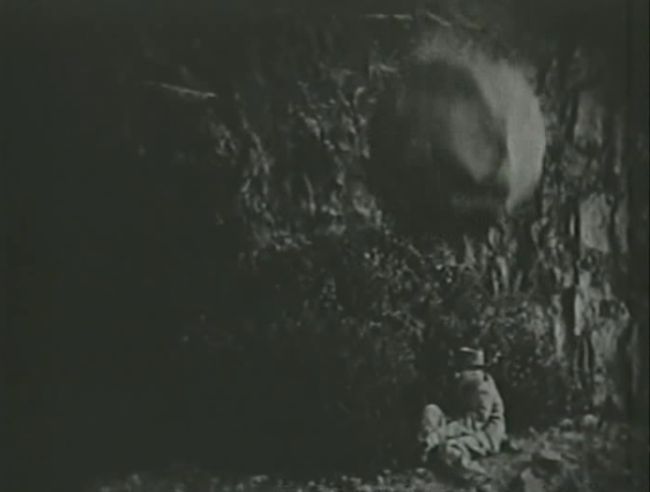 What’s more hilarious than the obvious dummy whose hands are taped to his ankle to simulate Ken’s injury is that rock just full-on hits the hell out of his head, breaking into a dozen pieces as it smashes the shit out of the dummy. 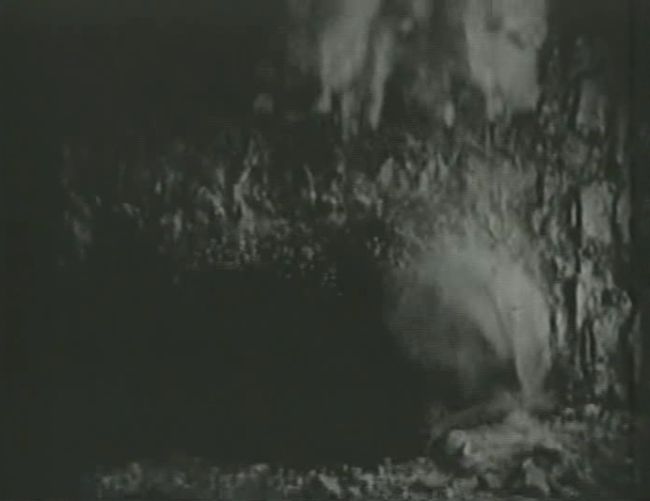 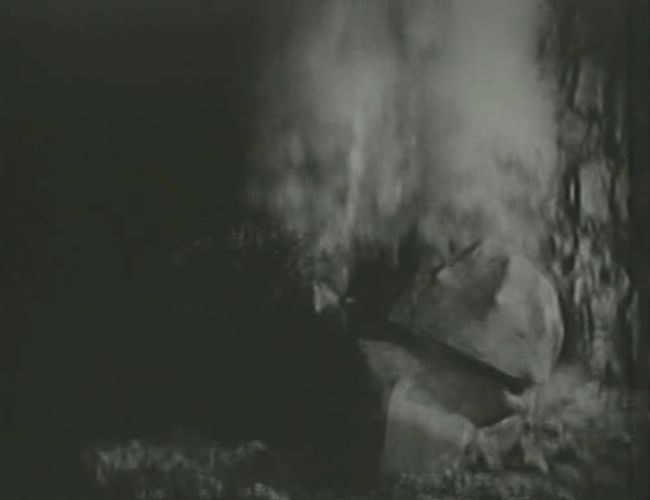 And Ken is going to come away from this without a scratch, goddammit. At least Regis got wounded in The Phantom Creeps. That was fun, and it also made him a total badass. This guy gets killed in every finale and then the serial just cheats by using footage in the cliffhanger that, the next week, they pretend never existed. There’s no fun in that, it’s just cynical. 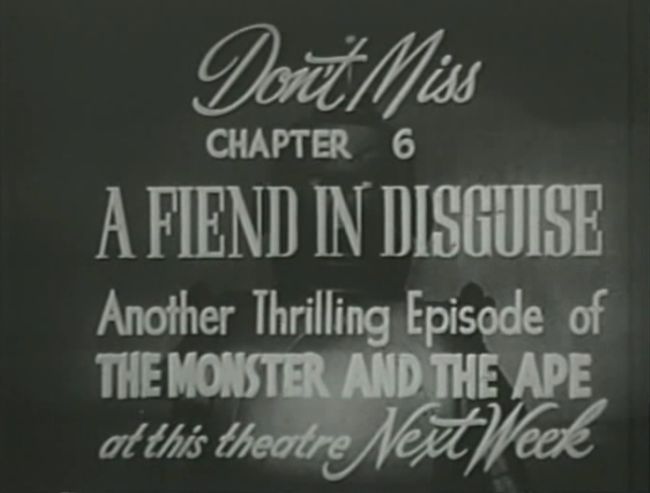 Oh look, “A Fiend in Disguise.” Clever title, considering we’ve known now for two chapters that Dr. Draper was some dude in disguise.