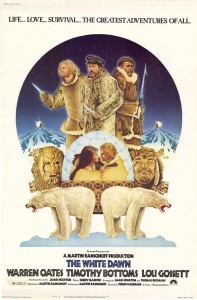 In 1971, James Huston published The White Dawn: An Eskimo Saga, the story of three sailors from Massachusetts, lost at sea and rescued by native inhabitants of the Baffin Island area in 1896. In press releases of the day, accompanied by photos of Huston looking startlingly like Stewart Granger, Huston is praised for his “expertise” in the topic, having “lived with the Eskimo” for 12 years. It would take a 1990 Sports Illustrated article to fully flesh out those 12 years: Huston, a bon vivant who had studied art in Paris, decided to travel to the Baffin Island area in the late 1940s, with the idea to sketch wildlife and the native inhabitants. Once there, he would trade his own art for their carvings, then submit them to the Canadian Handicrafts Guild who put on a show; curiously, it appears the Inuit themselves were not involved in this gallery exhibition. 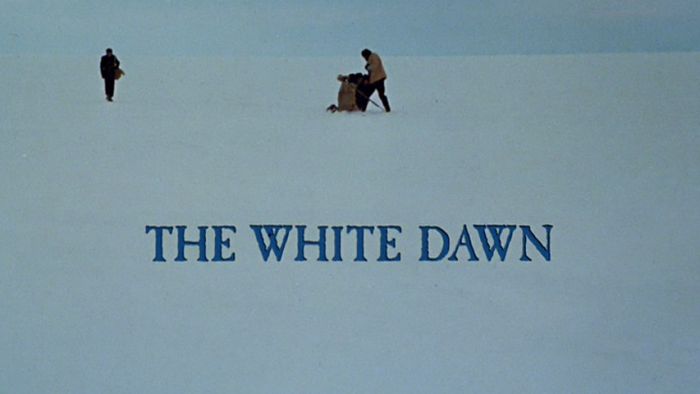 From Houston’s novel came the 1974 film directed by Philip Kaufman, which, given the details of the book, surprisingly treats the Inuit with respect. It’s part culture clash, part cautionary tale, part indictment of the casual colonialism our Western society is based on. In The White Dawn, white interlopers attempt to bring their own supposedly superior culture to the native inhabitants, assuming their sports, art, living arrangements and such were the product of savages. Though Kaufman provides a commentary and introduction to the film on the Warner Archive release, it’s unclear whether he realized the irony that the author himself was guilty of many of the things the three Massachusetts sailors were.

This 30th anniversary MOD-DVD from Warner Archive is quite a treat, a really lovely presentation of a film that has rarely been seen. Warren Oates, Lou Gossett, Timothy Bottoms and his unconvincing blonde hair star as the sailors who are rescued by the Inuit, then immediately set to changing their ways. Though the sailors develop different degrees of comfort with their surroundings, their plan is always to escape, which they attempt once with unfortunate consequences. Oates and Gossett give fine performances, while Bottoms is his usual slack-jawed self. The native actors are terrific, especially Joanasie Salamonie, who gives a heartbreaking performance, and Simonie Kopapik as the tribe’s leader, a nuanced and complicated character. 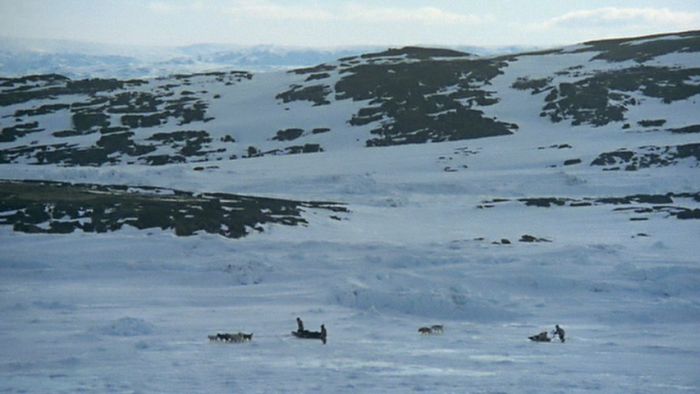 There are moments when the film veers into travelogue territory, but the gorgeous scenery, especially the amazing blue of the sky and rarely-seen arctic landscapes are delightful regardless. It should be noted that The White Dawn may not be suitable for kids. Originally rated R — Vincent Canby of The New York Times complained bitterly about the unfair rating — it has been changed to PG for brief upper body nudity and the actual, non-simulated killing of animals. This is not gratuitous killing, as the meat and fur are used by the locals, but it may be upsetting to some viewers.

Our second 1974 Lou Gossett film today is Sidekicks, a made-for-TV sequel to the 1971 classic Skin Game. Intended as the pilot for a television series that never came to be, Gossett reprises his film role, while Larry Hagman takes over the part originated by James Garner. (Garner was already busy with pre-production on The Rockford Files and had no interest in Sidekicks.) Co-starring in Sidekicks is a terrific cast including Blythe Danner, Jack Elam, Harry Morgan, Noah Beery Jr., Denver Pyle in what I assume is a cameo, and character actor Gene Evans in a small role that made me laugh more than anything else in the film. 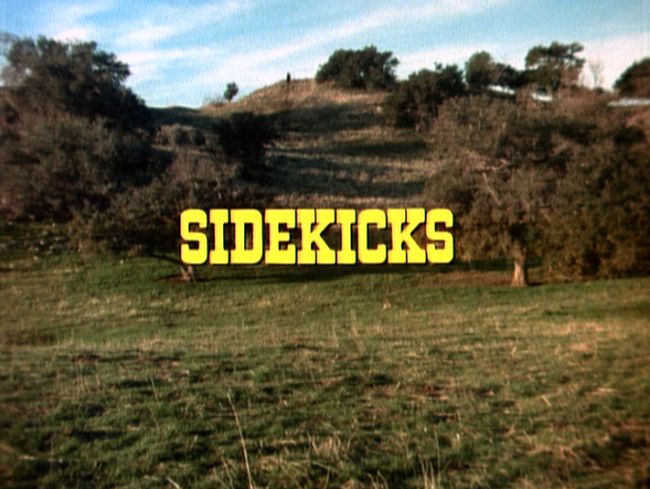 Unfortunately, the script for Sidekicks was obviously written by people convinced that a television audience needed everything explained to them. Twice. Not since the Hanna-Barbera cartoons of the late 1960s have characters uttered such obvious dialogue. Gossett is relegated to lines describing things we have just seen happen, or explaining that which we have already figured out for ourselves. Hagman, just off cancellation of his show Here We Go Again, does a poor James Garner impression, which is a very strange thing to see. 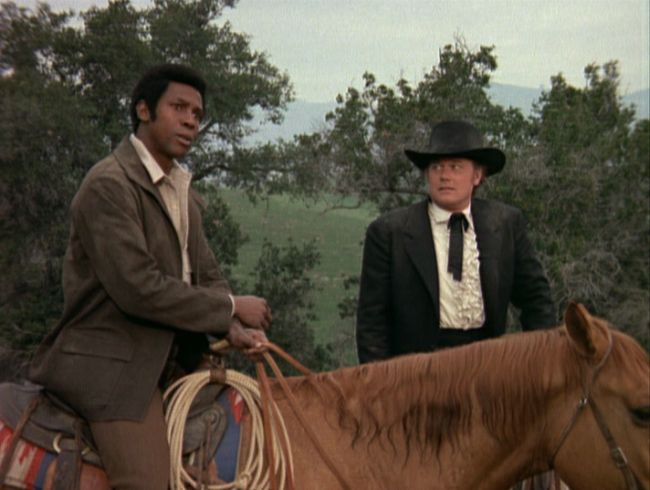 Blythe Danner, however, is a delight as Prudy, even though she was given the thankless role of playing the exact same part Joan Hackett did in the Garner movie Support Your Local Sheriff! (1969), complete with Harry Morgan as her father. In fact, the script for Sidekicks is a slightly reworked Sheriff!, though I found Danner and Morgan to be better in Sidekicks than Hackett and Morgan were in the original. That may be sacrilegious to say, but I do not care. I am a rebel.

Warner Archives offers this MOD DVD in a pretty nice print, though it hasn’t been fully restored, and there is occasional damage or contrast issues, but for a 1974 made-for-TV movie, it looks fine. As a sequel to Skin Game, you will be disappointed, I guarantee. As a vintage TV movie, though, I think you’ll be pleasantly surprised.

Speaking of James Garner (I swear, these posts just write themselves!), the might-as-well-have-been-lost TV show Nichols is now out on Warner Archive in a stellar six-disc set. 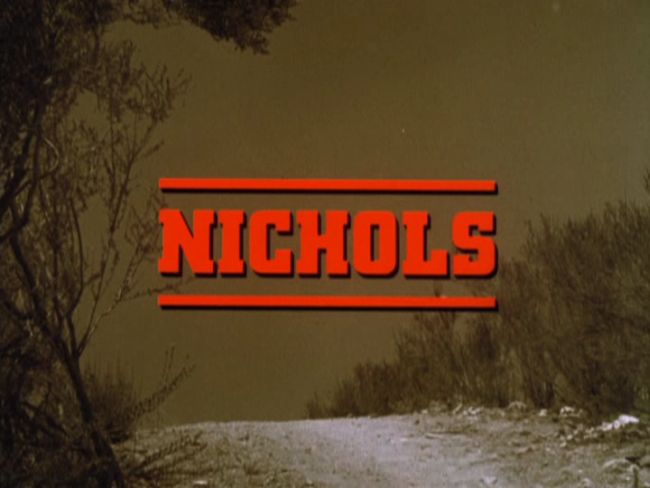 Years after being embroiled in a lawsuit with Warner Bros., Garner was forgiven — or perhaps he forgave the studio — and his concept for a somewhat modern Western was given the go-ahead. Warner had high hopes for Garner’s new show Nichols, but sadly, it lasted just one season; Garner, for his part, blamed the “wife of an executive” who was narrow-minded and silly, but I take his story with a grain of salt, because how many times have we heard that the men in power were waylaid by a nagging wife, only to find the story wasn’t true? Many, many times.

Nichols, a man with no first name, returns to his hometown of Nichols, Arizona, in 1914, to find his family no longer runs the place. Instead, the Ketchams have taken over, and they hoodwink Nichols into becoming the town sheriff, which means very little since they hold all the power and give none to the police force. It does mean he has to deal with gunslingers and other assorted dangerous types, which apparently the Ketchams are delighted with.

Nichols is an antihero in some respects, a scamp with occasionally iffy motivations but a good heart underneath. He notably does not wear a gun, rides a motorcycle instead of a horse, and is interested in a relatively liberated barmaid (Margo Kidder). Stuart Margolin, who would go on to play Angel in The Rockford Files, co-stars as an idiot deputy. Not coincidentally, many of the same people who guested on Nichols ended up in Sidekicks a few years later, as the pilot was trying quite hard to invoke James Garner without actually having James Garner in their film. 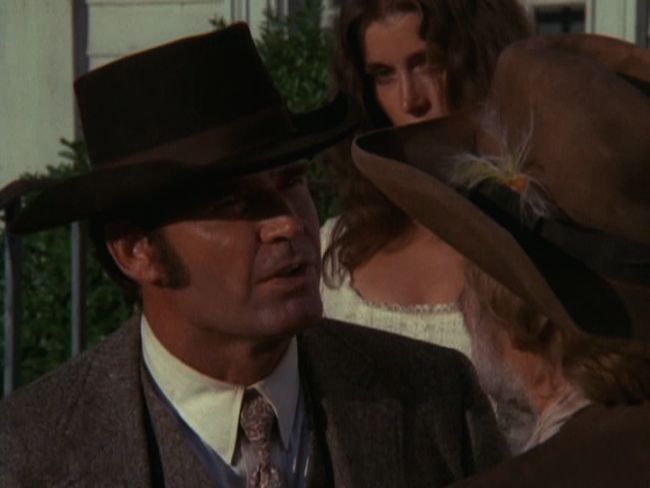 If you’ll forgive me being so vague about the show, I am hoping to use Nichols for a series on the blog in the upcoming months, plus a fellow blogger friend has the series and may be planning on blogging about it himself, so I don’t want to give many spoilers away. But I do want to mention that the set is exceptionally nice, and the quality of the film is good for something that was barely seen while it aired, lasted one season and has languished for longer than I have been alive. There is some softness to the picture, that brown tint that comes from film of this era aging, and some fading in a few spots. But as I mentioned before, Nichols was essentially lost until Warners released this MOD DVD set, and fans who remember seeing the show in its original run will be happy with this presentation.