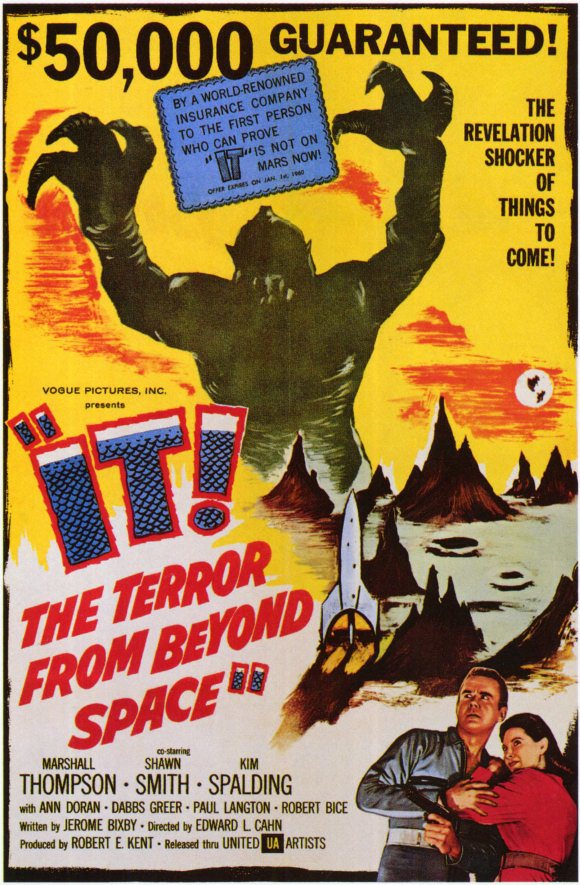 It! The Terror From Beyond Space (1958) is your standard, teen-oriented, low-budget space flick with its narrative roots firmly implanted in the paranoia of the Cold War. It’s the kind of film where all the strings and zippers show, yet still manages to be not only entertaining, but effective. Helmed by Edward L. Cahn, the same director behind The She-Creature (1956), Creature with the Atom Brain (1955) and Invasion of the Saucer Men (1957), It! has come to be known as more than just an old-school science fiction classic, but as the inspiration behind Alien (1979), one of the most important science fiction films in recent history.

That said, as much as Alien “borrowed” from the plot, It! seems to have been conceived as a knock-off of The Thing from Another World (1951), right down to the title. Further, It! wasn’t the sole inspiration for Alien, as Planet of the Vampires (1965) also provides quite a bit of the story that ultimately ended up in Ridley Scott’s film. That Alien was just a big-budget version of an old B-movie is no surprise, given so many films of that era, including Star Wars (1977) and Jaws (1975), were as well.

In It! The Terror From Beyond Space, it’s 15 years in the future, and the United States has sent its first manned rocket ship to Mars. But as we learn in a press conference, held in the standard bare grey-walled room so familiar to fans of 1950s low-budget cinema, everyone in the ten-person crew has died, except for the captain of the ship, Colonel Edward Carruthers (Marshall Thompson). Carruthers is being retrieved by a rescue team intent on bringing him back… to his own court marshall for the murder of the other nine members.

Carruthers, however, insists that they all died at the hands of a large monster. No one believes him, of course, especially not the captain of the rescue team, Colonel Van Huesen (Kim Spalding). As they fly back to Earth, Ann Anderson (Shawn Smith) begins to fall for Carruthers, and everyone else seems to like him well enough, too, especially once It (Ray “Crash” Corrigan in a Paul Blaisdell monster suit) turns out to have stowed away on the ship and is now nabbing and sucking the fluids out of crew members.

Being a 1950s sci-fi flick, It! is, of course, full of the kind of things we make fun of nowadays. Mary Royce (Ann Doran) is a doctor, but we see her waiting on the male crew members, making them coffee and feeding them, before we even realize she has a role beyond being a space waitress. There are a lot of specious science-y statements made, knobs glued to random pieces of wood, and iffy spacesuits. 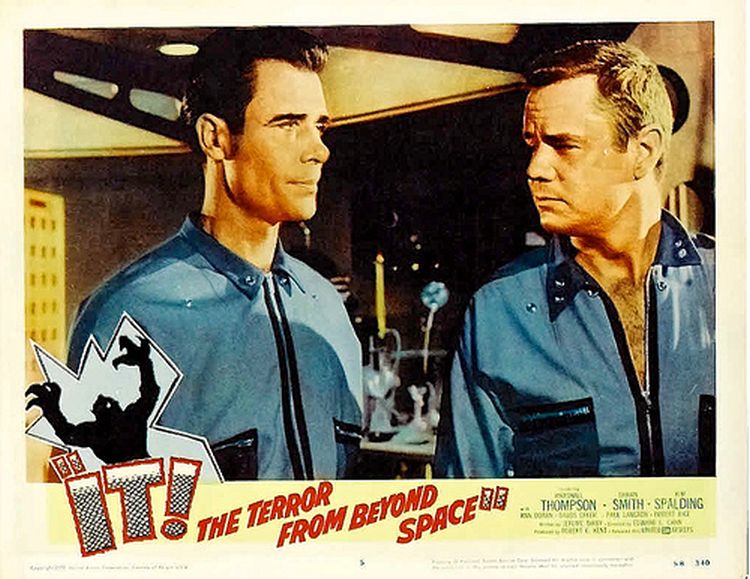 In the super futuristic year of 1973, Americans had somehow fallen behind in their undershirt technology. Bet the Russians had undershirts. How could this undershirt gap be allowed to continue?

Worse, there are a hundred times where just a little bit of thought could have turned an awkward and silly situation into something great. All of the quickie films in this genre suffer from that to some extent, but It! is particularly egregious. A hatch that is the only thing which separates the crew from this monster what cain’t be kilt is opened willy-nilly, causing all kind of havoc, yet without even some kind of weak explanation for this poor decision. There’s also a strange moment when some of the crew left on an upper level are talking loudly in order to distract It, but their talking is obviously a recording; in fact, some of the characters heard are already dead in the film. No one involved thought to change the script to have someone flip a few buttons and play back some audio from earlier in the voyage and pipe it into an empty room, which is a shame. 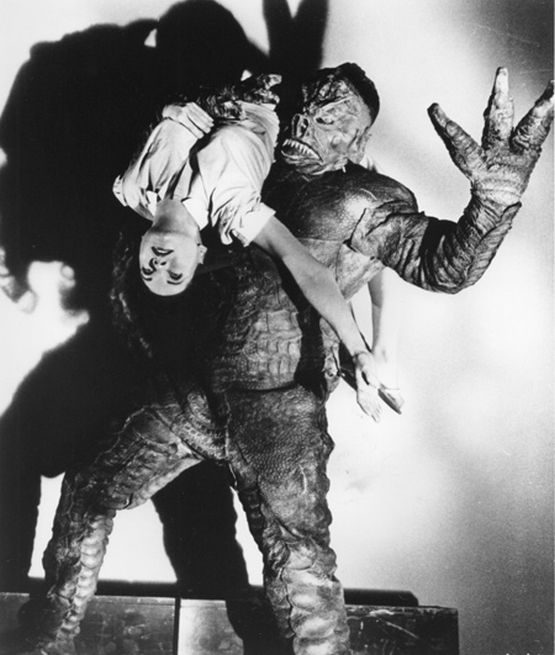 Long-time readers of SBBN will remember the weekly recaps of The Monster and the Ape (1945), a bad movie serial made badder by the antics of one Ray “Crash” Corrigan, who would don his homemade ape suit and pester actors during their scenes, hitting them on the head or grabbing their butts.

Crash is at it again in It! The Terror from Beyond Space. Master monster maker Paul Blaisdell created the suit for the film with the understanding that he would be wearing it, and only later did he discover Corrigan had been hired instead. Corrigan, significantly smaller than Blaisdell, doesn’t fill out the suit at all. According to Blaisdell’s assistant Bob Burns, Corrigan refused to be fitted for the suit, instead sending over a pair of long johns and forcing Blaisdell to stuff them and try to make a costume around that.

In some of the better-lit scenes, it doesn’t seem like this long john situation worked out well, though author and historian Randy Palmer notes that the long johns took the “guesswork” out of sizing, and that those wrinkles and obvious empty spaces in the suit that can be seen when the creature walks around were done specifically for comfort. Further, the detailed scales all over the suit were attached to that pair of long johns; a similar method had been used for Blaisdell’s infamous Mammary Monster, better known as The She-Creature.

According to Bob Burns, assistant to Paul Blaisdell, even if the suit was semi-fitted to some of Corrigan’s clothes, the mask for the costume wasn’t fitted at all, and production told Blaisdell to not worry about anything, it would fit Crash just fine. It didn’t: Crash’s chin pokes out of the mouth hole. To fix this problem, the chin was painted red and passed off as a tongue. Make-up artist Layne Britton had come up with the idea in a brainstorming session, but once the chin was made up, she said what everyone was thinking: “Kinda looks like he’s saying ‘d-uh.’” 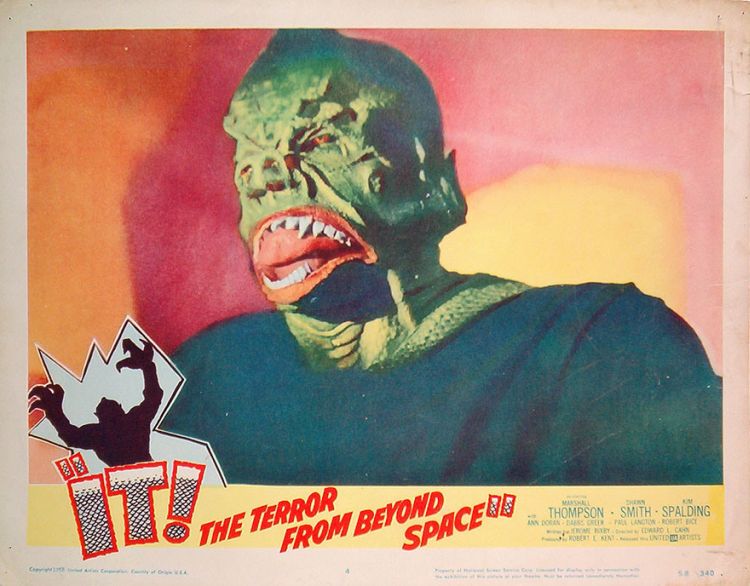 Still, the filmmakers were so proud of this workaround that it appears in lobby cards and promotionals, spruced up, of course.

But that chin-mouth situation caused a problem when the monster’s head was meant to move. As quoted in this terrific article at Tor (from where much of my information comes), Crash “had at this particular point in his life yielded to the deprivations of acute alcoholism,” and his performance was marked by “passive-aggressive behavior and difficulties in navigating around the set in costume while intoxicated.” Crash, apparently hired on thanks to a producer friend wanting to get him some work, would often just not follow directions, and his stubborn mistakes made it into the film. One notable moment is when he’s meant to look up through an open hatch, and instead, Crash just adjusts the monster mask head with his hands:

He’d been in the suit about an hour, and with his chin actually sticking out, when he would move that mouth at all it would start to pull the eyeholes away from his eyes. Eddie [Cahn] shouted out to him, “Lift your head. I can’t see your eyes, lift your head up!” Corrigan took it literally and you suddenly see this big claw come up and he lifts the [monster mask’s] head up! They just left it in the film! – Bob Burns

Earlier in the film, when all we see of the monster is its shadow, it appears to have a very human head. That turns out to not be a continuity error but a Crash Corrigan Brand Hissy Fit: he didn’t want to put the costume head on, so he just refused, and they were forced to film the monster’s shadow with the actor wearing an incomplete suit. Later in filming, his drunken tumbles were causing scales to fall off, and Blaisdell, whom production had essentially shooed off the set once he delivered the costume, was called back in a panic. He spent his time hanging around, in part to repair the suit, and sometimes, just to keep Crash company.

An anonymous member of the cast later reported that Crash wasn’t the only problem child on set. Shawn Smith, for reasons unknown, was deeply unhappy during filming. “All we knew is that she was a real snit,” this anonymous co-worker said, and noted that everyone stayed far away from her. Smith, who started out her career as a starlet by the name of Shirley Patterson, had quite an active social life before marrying Alfred Smith, a businessman. When married, she took a few years’ sabbatical, though returned to films with a new name and new hair color in the early 1950s. Even odder, she has been known for decades as having been Miss California of 1940, but researchers have noted that they can find no evidence of her even being in the pageant, and she certainly didn’t win it.

Her performance is adequate, which is all that can be said for anyone’s perf in It! The Terror from Beyond Space. Everyone is either bored or, er, really bored, at least for the first half of the film. At some point around the time Lt. Calder (Paul Langton) gets trapped behind some enormous ventilation pipes and is forced to fend off the monster with a tiny little welding torch, things get interesting. Tension builds and real danger seems imminent. The dialogue is still very silly — watch for Dabbs Greer’s response to Calder’s panicked intercom reports as he lays injured and trapped — but Doran and Spalding start really bringing their A games to the film.

It! has a bad reputation, but like so many films, its reputation is overstated to an extent. For instance, there’s a funny moment when a crew member snots off to Carruthers, back when everyone thought he was nuts for claiming some monster ate all his crew mates: “Mars is almost as big as Texas,” he smirks. “Maybe it’s got monsters.” This is clearly a joke, but more than one writer and reviewer has taken it as an error, claiming that the screenwriters truly thought the state of Texas was bigger than a planet.

It seems inconceivable that multiple Americans in the business of writing about film would forget the long-standing trope of Texans exaggerating their great state’s attributes, but it seems that some people really need to prove that this is a terrible film. It! The Terror from Beyond Space is not a terrible film, but it’s not a great one, either. As Variety said in 1957, “It’s old stuff, with only a slight twist.”

Inspired by one classic and the inspiration for another, though, It! is an important film, and soon to be released by Olive Films on DVD and Blu-ray on May 19, 2015. The Blu-ray looks amazing, retaining much of the “old film” feel with plenty of grain and only a moderate cleaning of the film sources. The audio is very good, clear and well mixed while being that comforting mono mix that fans of old films love. For more specs and screencaps, see blu-ray.com here.