The Monster and the Ape #8
Death in the Dark

Previously! Everyone finally figured out Ernst was disguised as Dr. Draper all along! Ken gets smug about it! A giant gorilla tosses Babs around a little! And that’s about it!

For those of you playing The Monster and the Ape home game, this episode starts about 2:24:25 on the OV Guide version. 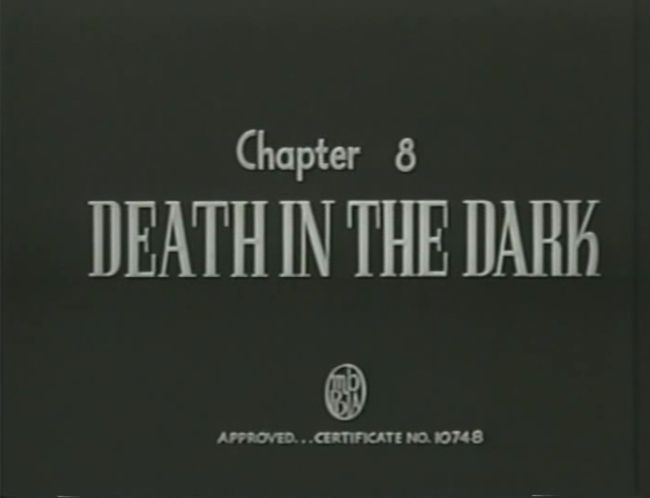 Just gonna get this out of the way: There is no death in this episode.

We learn in the recap that Babs was left alone while Ken and Prof. Arnold go to the police with that film showing Ernst was the one who attacked Dr. Draper. Also in the recap, we see Babs clearly hears something going on in the lab, but for whatever reason, doesn’t do anything about it. 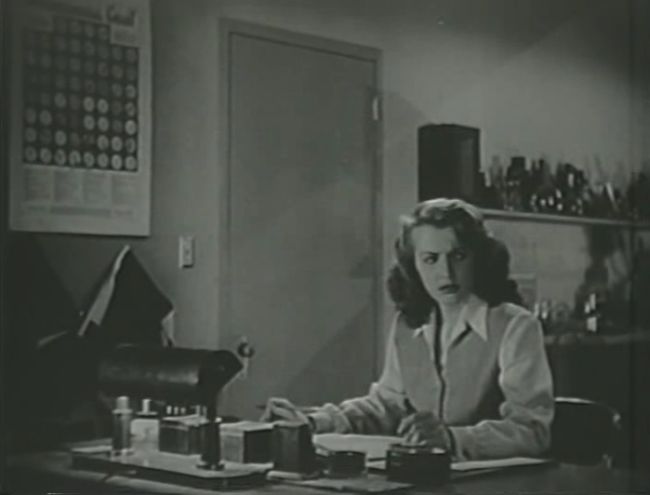 The henchmen send Thor the gorilla into the lab, apparently without realizing Babs is in there. Thor tosses her around a bit, but once they hear her screams, the henchmen run in and pry Thor off of her. They direct him instead toward the Metalogen Man, which he was supposed to pick up and load into their unmarked van of criminality, before he got distracted by a girl in the lab. 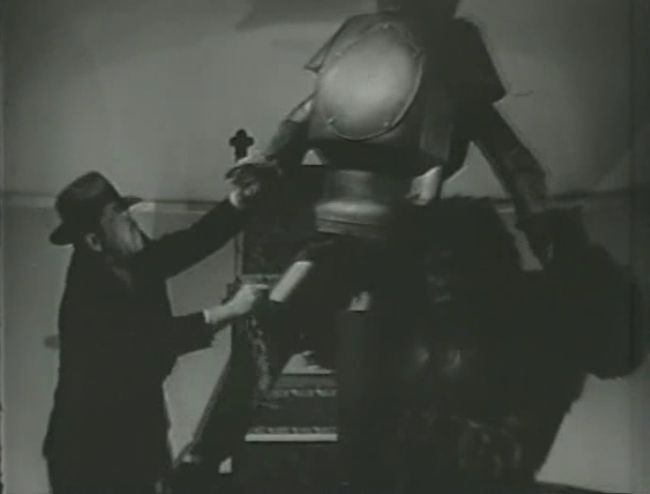 Take note: This moment where the gorilla is fumbling with an obvious cardboard shell of a robot is the first time the Monster and the Ape are seen together. Thrill! to this action packed episode!

Speaking of the robot: The thrilling publicity material which shows him in possession of a pair of fucking-fucking laser eyes, so why didn’t he light that pit of mystery liquid in the middle of the paint factory up himself last week? That would have been terrific. Instead, the worst actor in this mishmash group of henchmen takes a lighter to the want ads and drops them into a puddle. Borrr-innnng.

Back to the serial: Before the henchmen leave the lab, they also grab the metalogen disk which allows the robot to operate. It’s this disk that people like Ken are looking for when they grab M-Bot inappropriately, by the way, because the disk is situated on M-Bot’s sidebutt. Eh, it’s a living.

Prof. Arnold and Ken return just after the henchmen leave, and when they discover what has happened, they have a great idea: Call the police! This is notable because, as you all are painfully aware, they haven’t bothered calling the police even once during this ordeal, not when buildings were blown up, cars were run off the road, or people died. Say… weren’t they just at the police station? What did they do there, play pinochle?

Meanwhile, the henchmen take M-Bot to a woman named Nora’s boarding house, which looks like a lovely townhome from the outside because the location scout for this shindig was asleep on the job. She’s unimpressed with the sight of the enormous metal man, but has a creepy cave-like basement he can be hidden in. ‘Sgot secret doors and ev’rything, it does. 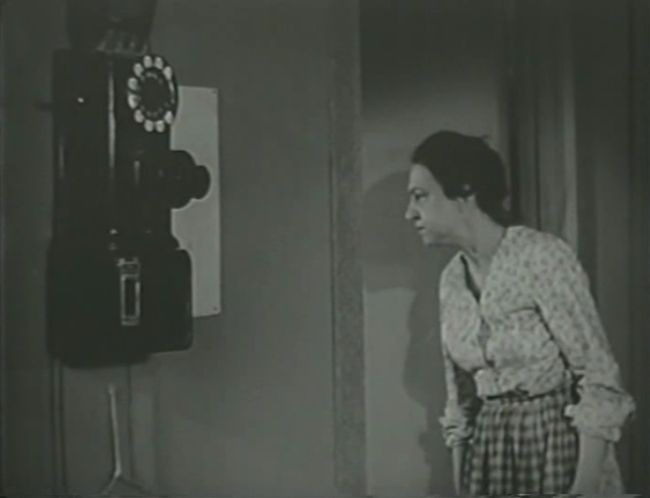 Nora, unimpressed as ever, watches as two henchmen drag what must be a 2,000 pound robot into the basement.

As they rassle with a deactivated M-Bot, Ernst is still back at his lair, listening to the police scanner. The news of Thor’s attack on Babs goes out over the wires, and we learn Thor is a world-famous gorilla. Which, on the one hand, makes sense, because he’s certainly unique. On the other hand, he’s just in some nondescript cage at the zoo, which isn’t how you’d expect an internationally beloved simian to be treated, and it seems to me that absconding with a famous gorilla every few days just to have him throw a boulder here or there would be a really bad idea. Surely an unknown gorilla, perhaps a gorilla intern, would not only be cheaper but less likely to be noticed by random zoo employees? 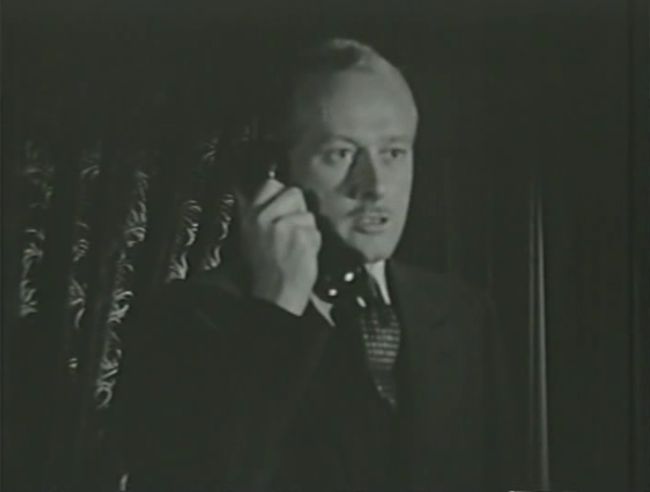 Ernst is one tightly-wrapped evil scientist.

Ernst gets hold of Dick Nordik and informs him that the police are looking for Thor, so Nordik grabs the ape and heads to Ernst’s home, per instructions. Once they get there, though, the monkey loses his damn mind and knocks Nordik right out, then moseys off into the neighborhood.

Back at Prof. Arnold’s lab, a police inspector has arrived to investigate the case. 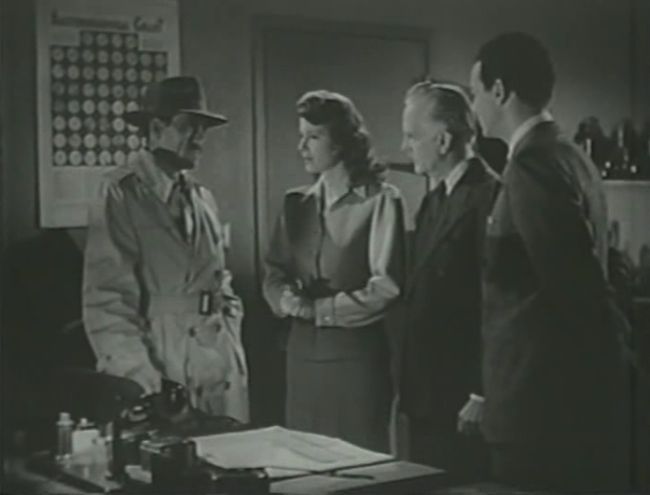 The guy who plays the inspector has such a soft, deliberate, strange voice. He must have gone into sudden existential crisis on a film noir set, wandered off in a state of epic ennui, and awoken in the middle of The Monster and the Ape a couple of hours later.

The inspector, along with a few police officers and Ken, arrives at the zoo, looking for Thor. He’s not there at first, but within moments, he appears behind hem, heading back to his cage. Ken takes this opportunity to walk up to this 75,000 pound lost, angry gorilla and attempt to grab him by the fur and drag him into the cage. Thor beats the shit out of him, and we all cheer. 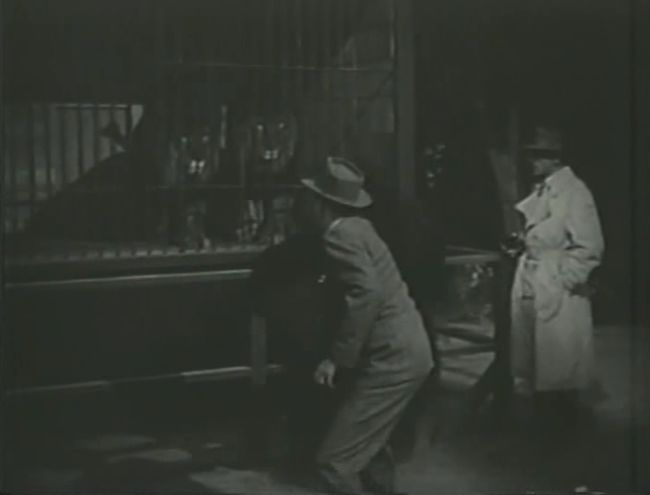 Meanwhile, Dark Inspector of the Soul over there fires off a couple of warning shots, and Thor, for reasons only known to the scriptwriters (ha ha, I’m silly enough to think there was a script involved in this thing), knows exactly what that means, so he sheepishly behaves himself and walks into his cage. It should be noted that those poor lions kept nearby for “authenticity” don’t seem to notice the gunshots on the set at all.

Ken comes to and, turns out, the guy is even dumber now than he was before he was monkeyhandled, and suggests to Inspector Camus that they secretly put Thor in the county lock-up while announcing on the news that he’s being kept at Prof. Arnold’s lab. That way, the people looking for the monkey will be tricked into going to Prof. Arnold’s, thus can be identified. Inspector Schopenhauer agrees because why not, reason is feminine in nature after all, and Ken’s got lovely eyelashes. 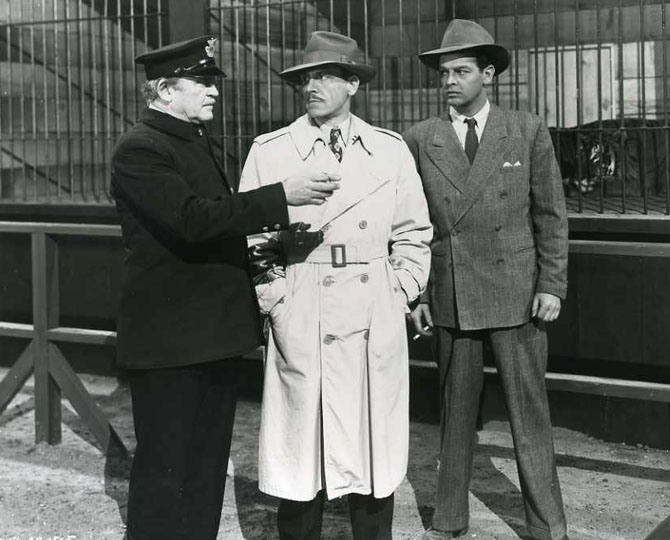 Publicity photo of Bud Osborne as a watchman at the zoo, Kenneth MacDonald as the police inspector, and Robert Lowery as Ken.

Back at the evil lair, a henchman says, “Herp, let’s go get Thor at Prof. Arnold’s lab, derp derp,” and Ernst informs the poor guy that it’s probably a trap… but if it would make him feel better, he can go ahead and check it out. Dammit, Ernst! You’re too soft! A little discipline is what your henchmen need, not apologies and indulgence!

So they’re spotted while idling outside Arnold’s lab, and as they drive off, Babs tells a taxi driver to follow them. She ends up at the boarding house and pretends to be interested in a room to get in and snoop around. What she doesn’t know is Nora was expecting her, thus shoves her into an unoccupied room and locks the door.

As eagle-eyed viewer James notes below, Babs had told her cabbie to go back to the lab and get Ken and bring him to the boarding house immediately. Moments later, Ken shows up and tries to pull off the “a friend of mine called me to pick her up” line, like Nora isn’t going to remember literally kidnapping Babs. She pulls a gun on him as two henchmen sneak up behind and… 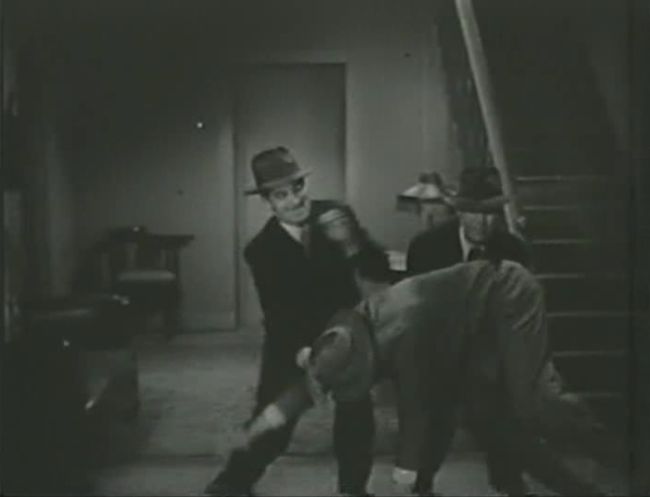 fistfight! It began with Ken throwing himself sideways at the henchmen in a move that is as hilarious as it is deadly. Ken is overwhelmed because of course he is, the man loves a fistfight but has only a 2-6 record thus far. They throw him into that wacky pit underneath the boarding house, and the walls slowly start to close in on him. 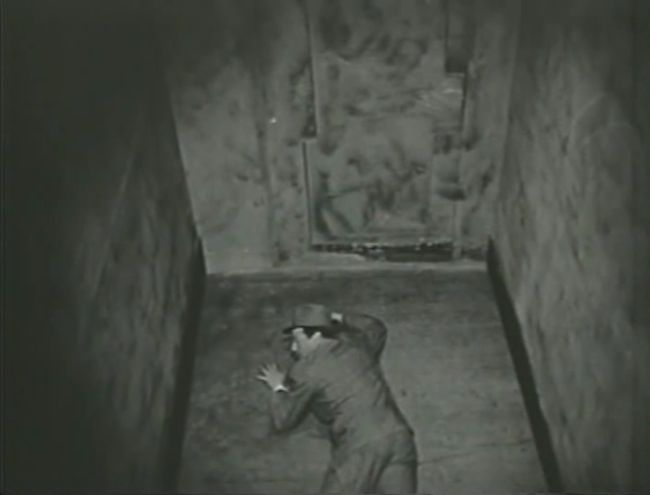 Who designs these rooms, anyway?

The stinger at the end asks us how a whole bunch of stuff that didn’t even happen in this episode will resolve; that’s how we know the stingers and intros were filmed first, and the studio was too cheap to re-edit them before release. 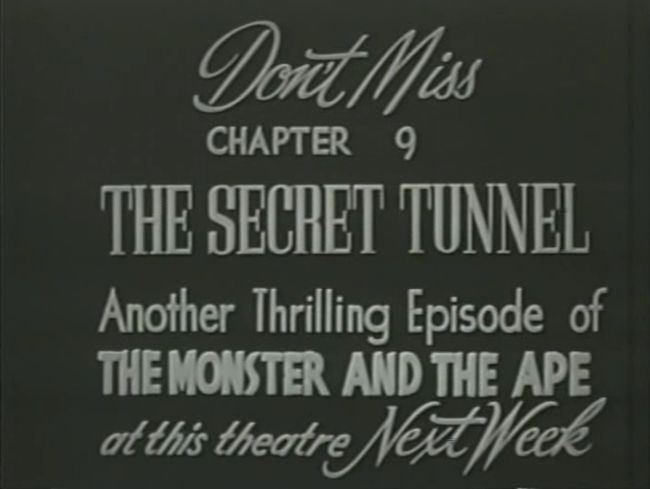 I’ll be there. Will you?