The Monster and the Ape #6
A Fiend in Disguise

Last week, I tweeted my usual announcement of the recap going live, calling the serial “The Monkey and the Ape,” in reference to my Chapter 4 recap where I complained that, with so little robot combined with so much gorilla, the serial might as well just take the “Monster” out of the title altogether. No one said anything, so I tweeted again, and still no reply. No one noticed! Or maybe this serial has sucked the soul out of everyone within a 100-internet-distance-unit radius, and if so… er, sorry, I guess. 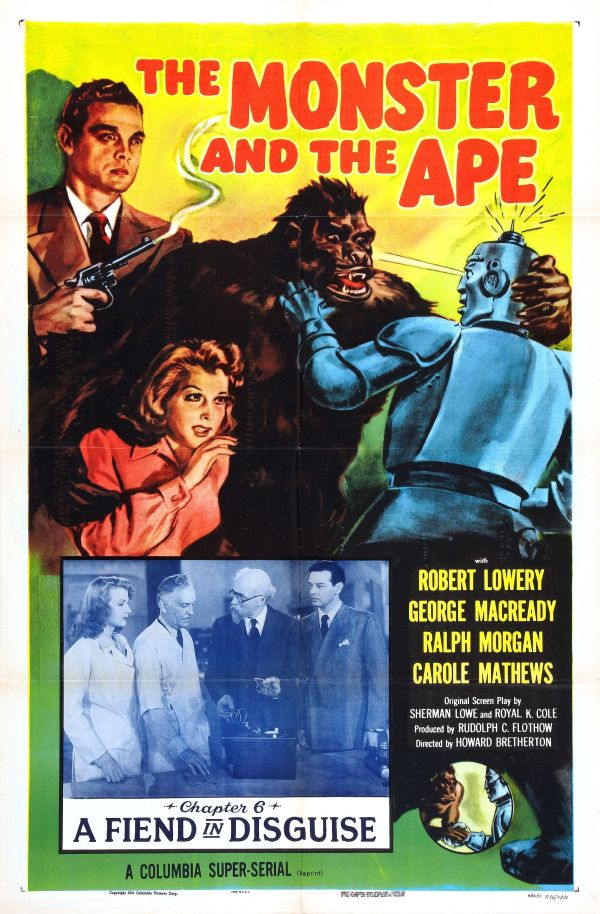 The story thus far: Prof. Arnold (Ralph Morgan) and a group of scientists, including Prof. Ernst (George MacReady), invent a robot powered by the fictitious but apparently awesome element Metalogen, which is derived from meteors that have survived the descent through Earth’s atmosphere. Almost immediately after demonstrating their magnificent robot to the press, a giant ape goes from house to house to car, killing all the inventors save Arnold and Ernst. We learn Ernst feels he’s the rightful sole creator of the robot, thus he and his henchmen and his enormous attention whore ape attempt to steal, at various times, the robot itself, the Metalogen, and/or the remote controller. Meanwhile, epic salesdink Ken Morgan (Robert Lowery) arrives to help Arnold by getting into a lot of fistfights, while Arnold’s daughter Babs (Carole Mathews) and his chauffeur-slash-butler Flash (Willie Best) interject a few things here and there, but why bother when there’s all sorts of white guys who could be getting the attention instead, amirite?

Last episode, Ernst — a name our excitable narrator pronounces as though he’s Ren Hoek suffering from chronic constipation — conked the real Dr. Draper on the noggin and, because he had Lon Chaney Sr.’s makeup kit in his trunk, made himself up to look like Draper to infiltrate Arnold’s lab. He’s going to far too much trouble, since all it would take is a couple of Pop Tarts and the proper application of duct tape to take their lab over.

Thus we begin this episode with Ernst tricking Arnold and Ken into hanging around in a quarry as the monkey sneaks (pfft) onto a hill and rolls a boulder onto them. Arnold gets out of the way but Ken is clearly and unmistakably crushed by the boulder in the finale of the last chapter.

For those of you playing The Monster and the Ape home game, this episode should start about 1 hour 47 minutes in, here at The OV Guide. 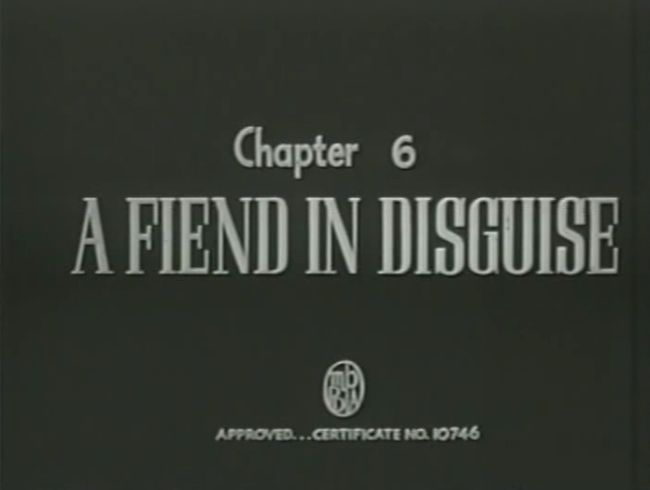 Before we find out how Ken survived being crushed into a fine carbon dust, a brief note: Starting with Chapter 5, the filmmakers just threw up their hands and shouted that they no longer save a single solitary fuck, and stopped using footage of the robot behind the title of each episode. I’m dead serious when I say I call this serial “The Monkey and the Ape,” because right about Chapter 3, they just straight-up forgot there was even a robot in this thing at all. He sits around getting dusted all the time, that’s it.

And now, the resolution to the cliffhanger! 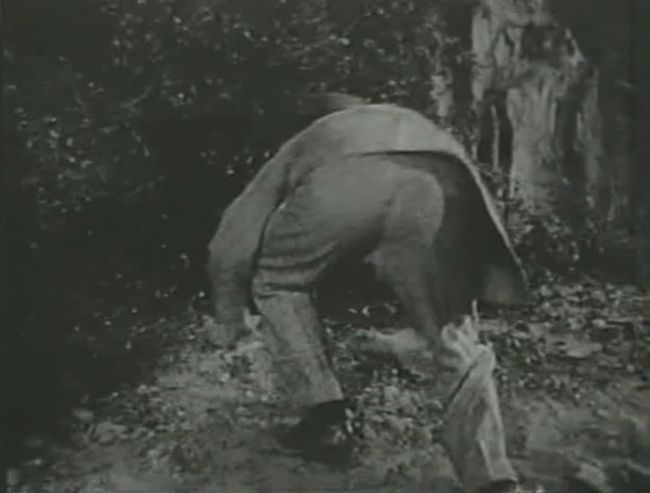 Yeah, Ken just throws his ass into some shrubbery which protects him from the rock we already saw him get flattened by. Are we not entertained?

Fake Draper continues with the demonstration once Ken dusts off and straightens his tie, because why bother leaving an area where you could get crushed by random ape-induced avalanches? Fake Draper shows them that his doodad — stolen from the real Draper, of course — works and can detect Metalogen. Previously, he insisted that if Ken and Arnold wanted the doodad, they would have to sign over all their profits from the robots to him, and today they agree, with Ken saying the robot would be such an extraordinary hit with buyers that it would generate enough profit for them all to become rich. 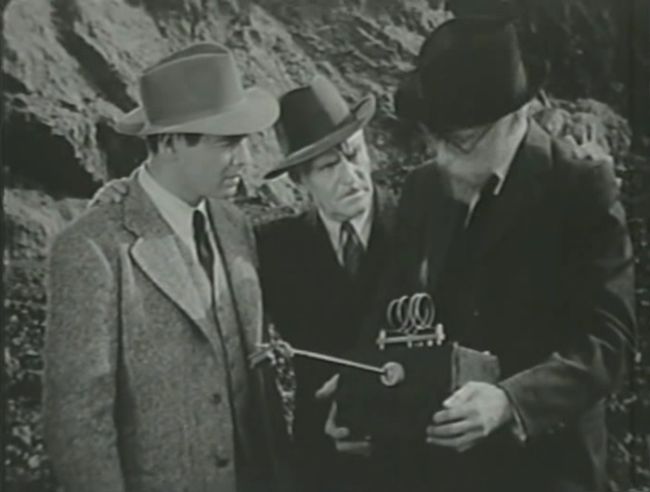 Ken, apparently the top salesman at Cleveland Amalgamated Robot Distributors, LLC, believes that you will still get profits even after signing a contract that gives all your profits to someone else. 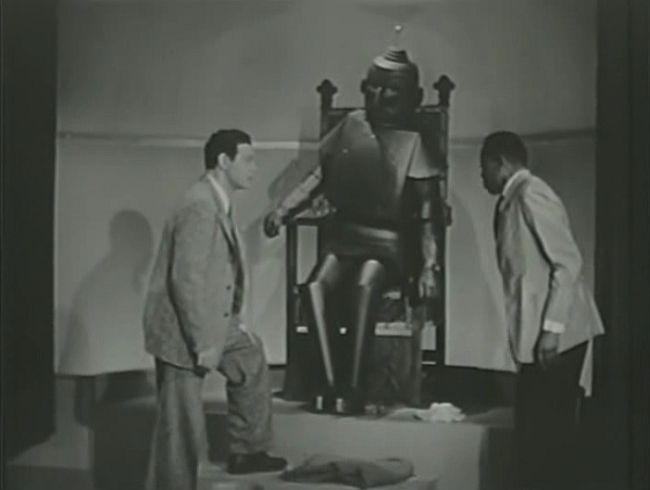 Back at the lab, Flash is, once again, cleaning the robot, and many jokes are had at his expense because he is scared of it, and pronounces it “rabbit”. This sets my teeth on edge for a few specific reasons beyond the racism: (a) the robot is dangerous, which is why it is referred to as a goddamned monster in the title of this serial, and since when has it been stupid to be afraid of actual danger, and (b) the white folks pronounce “robot” in myriad ways, including “row-bitt,” “row-bott” and, my favorite from Ralph Morgan, “Robert.” 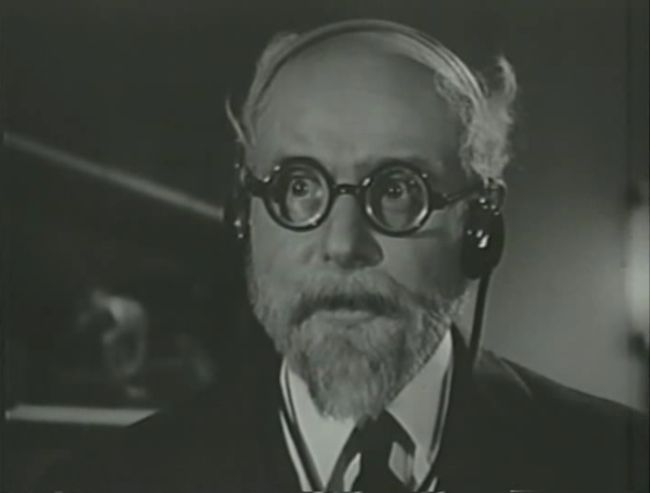 Meanwhile, we get a little insight into Ernst’s psyche when he goes on at length about how women and science do not mix, and he wouldn’t be caught dead with a woman in his laboratory.

After he has his little girls-are-icky temper tantrum, fake Draper and Ken drive around town with the doodad, looking for Metalogen, and I notice the town looks suspiciously like the one used on the Warner lot, as you can see in this old screencap of mine from God’s Country and the Woman. In fact, I would swear the Star Drug we see in MatA can be seen in God’s Country, but it’s not like I’m about to get up off my fat ass and go dig out the disc and look for it or anything. 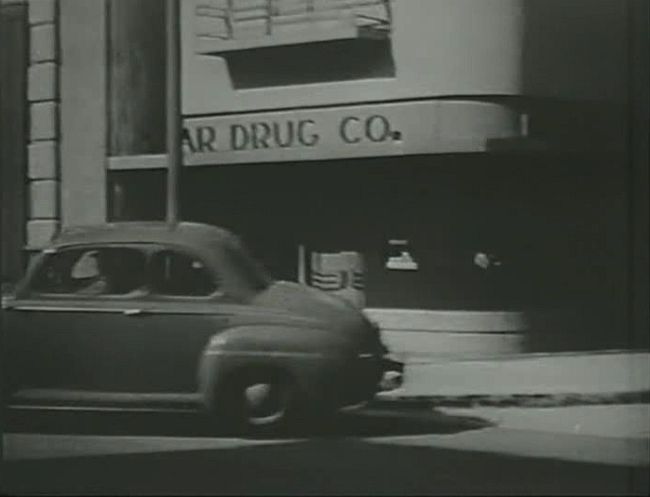 Okay, that was the most interesting part of the serial. Sorry, guys.

Everyone seems to enjoy driving around town looking for Metalogen, but this raises a lot of questions: Where would bits of meteorite be in the center of a dense urban area anyway? Once the detector goes off, what are they going to do, knock on doors and demand all the metal in the household? Dig through everyone’s coal bin hoping for a stray speck of Metalogen? Eh, I’m comforted by the fact that they don’t know what they would do, either. 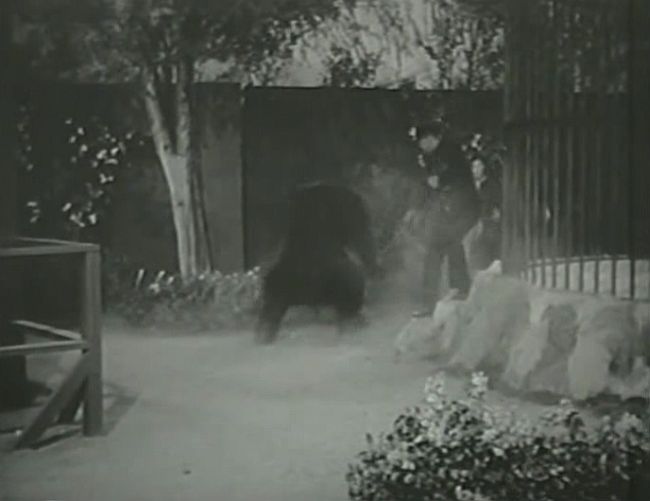 Back at the zoo, as virile, handsome Dick Nordik returns Thor to his cage, Ray “Crash” Corrigan acts out again, scaring a bunch of extras meant to be walking near his cage. You can just barely see them behind Nordik, and I get the impression from their reactions, which includes some screams and glancing directly at the camera, that Crash went off script again.

Ernst, prior to driving around town, called the lusty, reliable Dick Nordik to tell him to place their stolen Metalogen in the industrial area of town, so when he and Ken drive there, the doodad will go off like a car alarm. Then Ernst as Fake Draper tells Ken it’s nothing, just detecting industrial background radiation, or maybe some swamp gas, maybe some interference from a flaming hubcap dangling on some fishing wire. He does this knowing Ken will suspect him of lying and go back to this industrial area of town on his own to look for Metalogen himself. 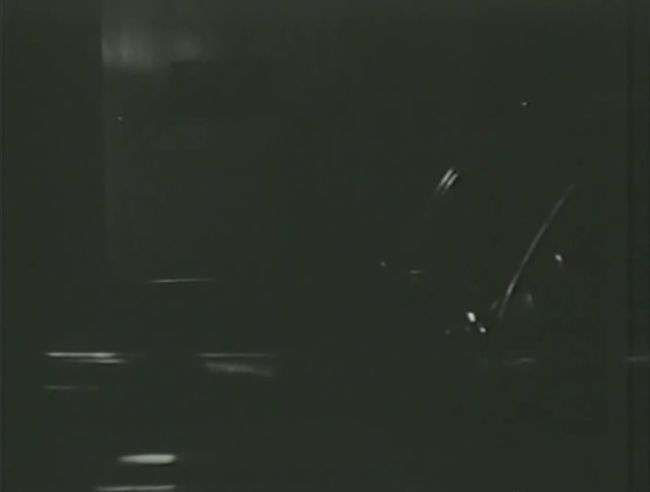 I’d love to show you what’s going on, but most of the footage looks like this.

Because Ken is very, very dim, he falls for Ernst’s weak plan. Ken has Flash drive him back to the area at night, while using Fake Draper’s doodad to detect Metalogen. As he snoops around, henchmen kidnap Flash and break the doodad; meanwhile, back at his own lab, Ernst activates the robot. 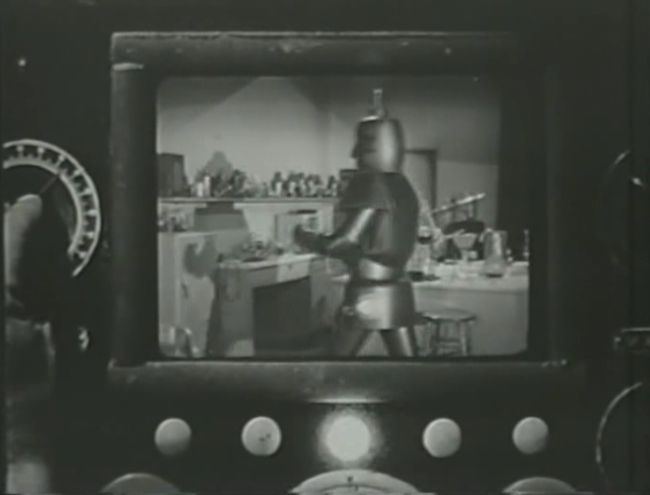 The robot has been outfitted with a kicky little skirt. Strange, for a man who doesn’t want women in the lab…

When Ken returns to the car, he finds Flash missing, and after a search discovers him unconscious in one of the buildings. Just then, he is jumped by the henchmen and a fistfight breaks out. This is notable because it’s been nearly 27 minutes in serial time between fistfights, the longest we’ve gone thus far. 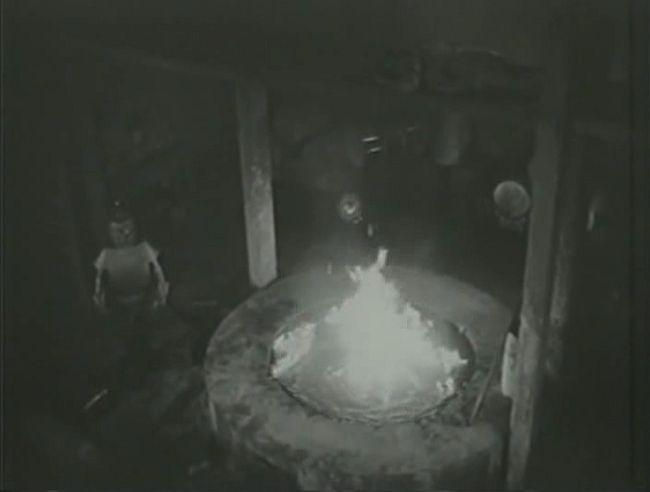 Suddenly, it’s a goddamned Christmas miracle: The robot does something! He starts trashing this tiny paint factory with a rickety walkway that goes right over a pit of fire — what? all tiny locally-owned paint shops have pits of fire in the middle of them — and Ken is left dangling, in danger of getting his butt hairs singed off. 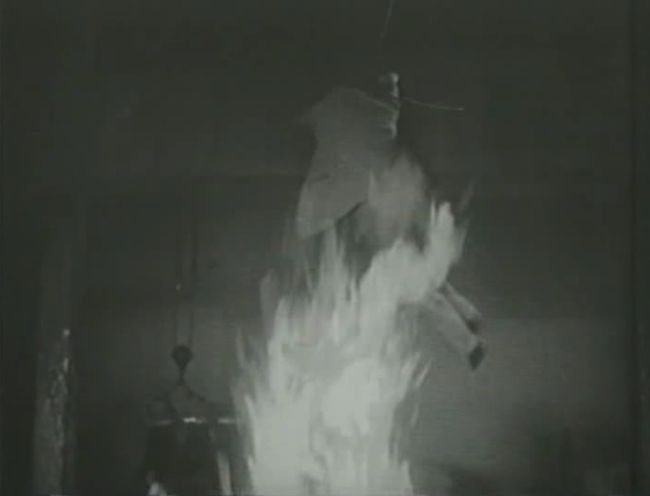 Stay tuned for next week’s episodes when things might happen to people we pretty much do not care about. 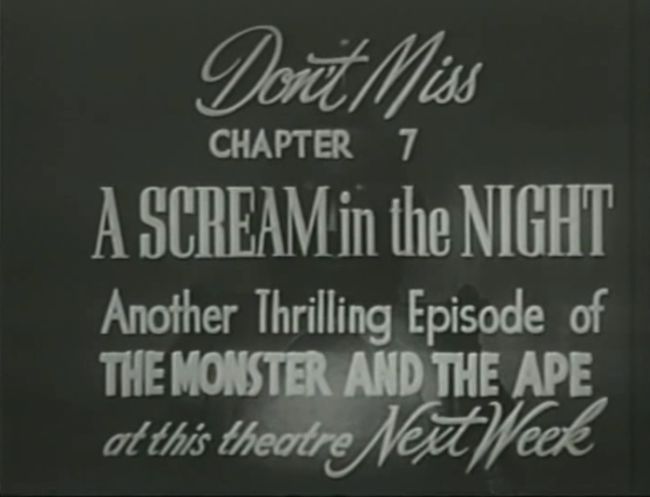