Dan Brooks (Bing Crosby) is a disenchanted junior executive, the kind of guy expected to marry the boss’ eldest daughter and lead a staid, white collar life. But his true passion is racing, so he runs off with his horse Broadway Bill and his good friend, horse trainer Whitey (Clarence Muse), with plans to enter Bill into a national derby. They get into musical hijinks along they way as they try to raise the entrance fee, while the boss’ youngest daughter Alice (Colleen Gray), who has a crush on Dan, joins in on the scheme.

Frank Capra’s Riding High (1950) is a musical remake of his own Broadway Bill, the 1934 romantic comedy starring Warner Baxter and Myrna Loy. Beyond the old stories about Riding High being an inside joke about Bing’s oft-rumored love of the leafy stuff, the film is best known for using significant footage from the original film in the 1950 version. Eleven of the supporting players in Broadway Bill return for brief scenes in Riding High. Those who were still alive did a few re-shoots, those who had passed on appear in archive footage, and they even put William Demarest in a 15-year-old suit so he would match shots of the late Lynne Overman from the 1934 footage.

It’s all somewhat jarring, especially in the beginning when the film opens with 1934 scenes in what should have been a modern-day bank. 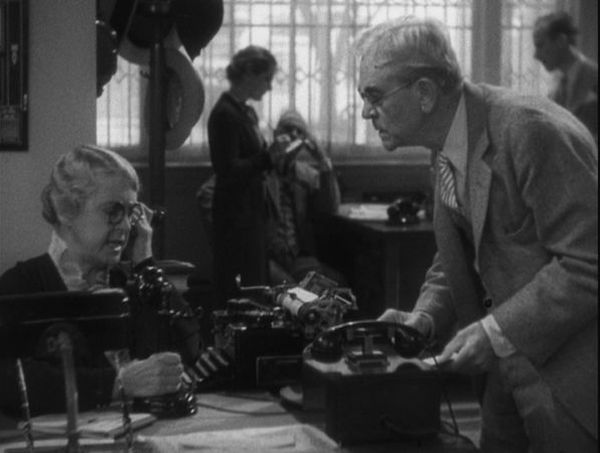 Just look at that phone, that typewriter, those fashions. Even the film grain is obviously early 1930s and doesn’t match the new footage, as you can see here, in a 1950 scene intercut with the 1934 film. This Frances Gifford in 1950, who is talking to the older woman from 1934: 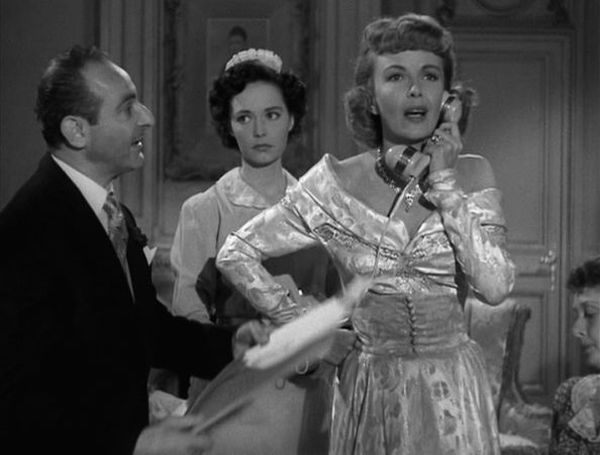 This was the first film Frances was in after a serious car crash two years earlier that almost claimed her life. Her head injuries were so severe she was hospitalized off and on for nearly 25 years, and had to leave the film business. As odd as it sounds, her obituary in The Independent in 1994 was terrific, and is highly recommended reading.

Frances is really quite good in Riding High, a musical with enough star power and quality that I cannot for the life of me figure out why they decided to use so much old footage. Bosley Crowther of the New York Times raved about the film in his 1950 review, yet doesn’t mention the re-used scenes once. Craig Butler of Rovi more recently reported that Capra wanted to prove to Paramount that he could do an A-list picture with a B-list budget, in an effort to stay viable in the 1950s film industry. 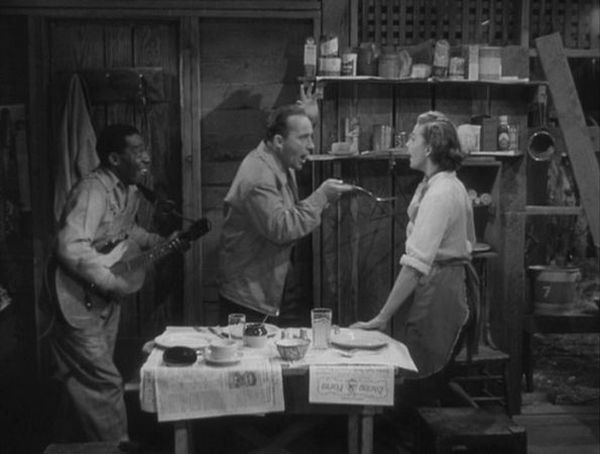 In the future, everyone should probably should keep Bing away from the spoons.

Capra’s frugality must have impressed the right people, because he was given another film with the studio, Here Comes the Groom, which went on to win an Oscar for Best Original Song. And though it comes toward the end of his career and has more than a few signs of desperation, Riding High is a nice little film. The music is well done, and there’s a sharp edge to it all, especially with a rather surprising ending. As a personal note, I can assure you that, even for those of us with a low Bing Crosby tolerance, it’s a very enjoyable flick.

Riding High is available from Warner Archive in a MOD DVD.