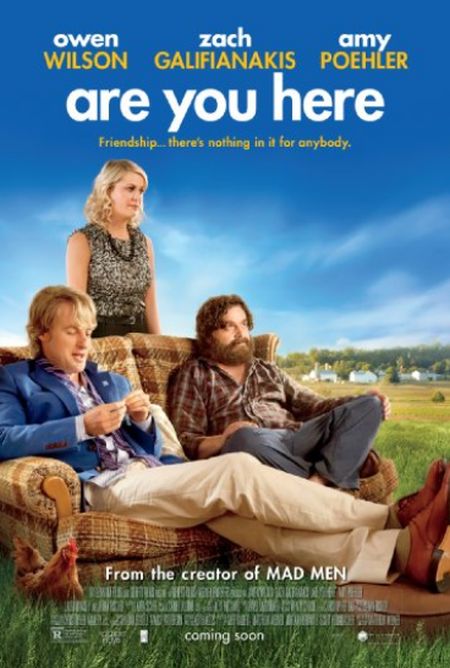 Quirky comedy Are You Here (2013) is a tale of the most bourgeois of bromances, two pals in a bizarre, yet strangely dull, codependent relationship. This is the first feature-length outing from Matthew Weiner, a writer-director with one hell of a pedigree. Despite his stellar writing on the iconic “Mad Men,” Are You Here reflects none of the nuance or introspection audiences have come to expect from his work.

Owen Wilson plays the inexplicably named Steve Dallas, an Annapolis weatherman and womanizer whose loyalty to buddy Ben (Zach Galifianakis) is based not just on a lifetime of friendship, but copious weed and the fact that only an emotionally askew person like Ben would put up with Dallas in the first place. Ben is not an easy person to love, either; his passions, while noble, turn hostile at whim. When Ben’s estranged father dies, he returns to his hometown with Steve in tow. The situation is as uncomfortable as expected: his sister Terri (Amy Poehler) is perpetually angry, especially at their dad’s young widow (Laura Ramsey), and when Ben is left the bulk of the large estate, the situation becomes critical.

Though ostensibly about Ben’s family, the film’s real focus is on Steve, whom a rakish Wilson portrays as the exact kind of rakish character he’s played for well over a decade. Steve spends his days trolling for sex and peeping into neighbor’s windows, things that, in Are You Here, are just good fun. He objectifies women, of course, but there’s a peculiar angle to it: the parade of nude women in and out of his life are nearly identical. Perhaps the audience is meant to see these women as interchangeable objects in the same way Steve does, but the film sees them as interchangeable, too; it’s juvenile and sad, especially in a film that surely must, at some point, have had some good ideas attached to it.

Still, it’s easy to be lulled into complacency with the bright, mediocre cinematography, episodic structure and pleasant atmosphere of Are You Here. The perfs are solid and competent, if uninspired. Poehler’s portrayal of a woman ambivalent about her role in society is spot-on, her roiling anger understandable considering her life is controlled by a series of men, from her father to her brother’s jerk friend, none of them seeing her as anything but an obstacle to overcome. Sadly, the script spends too much time trying to turn Terri into a generic, ball-busting harpy in a bid for laughs. And yes, there are laughs to be had in Are You Here, though they’re as scattered and uneven as the film’s morality.

Not a single character in Are You Here is likable, and that’s as it should be. But the film sticks these characters into a flat story peppered with unconvincing moments, such as Terri’s lawsuit, or perhaps injunction — details are vague in Are You Here — that somehow makes its way to court less than a week after papers were filed. This brief courtroom tangent encapsulates both the best and the worst aspects of the film: Peter Bogdanovich’s cameo as the judge is charming and effortless, while the punchline to this episode is ham-handed though, impressively, one of the best examples of a “kill your darlings” moment to ever appear in a professional screenplay.

Angela, the young widow who styles herself as a prize for men who get their shit together in a shallow, middlebrow way, is interesting on the surface, a hippie archetype who encourages people toward conformity. This could have been a fun twist were Laura Ramsey at all concerned with portraying anything but a cheesy, thoughtless romcom trope. Her Angela is all stereotype and no substance, dispensing silly nuggets of what’s supposed to be wisdom while clad in a crunchy, earthy dress. Her wardrobe includes a slew of these dresses, appropriate for any occasion, yet she wears a see-through shift to her husband’s funeral and a crocheted bikini top to the reading of his will. Is it an act of misguided, stickin’-it-to-the-man rebellion? Just an excuse for Are You Here to show a woman in skimpy clothing?

You’ll never know, because the film itself doesn’t know, either. As entertaining as it sometimes feels, Are You Here is a whirling mess of a film, with a finale that hints at some larger, thought-provoking issues which are completely unearned.  Are You Here is pleasant enough if you let it wash over you, but collapses under even the tiniest bit of scrutiny.