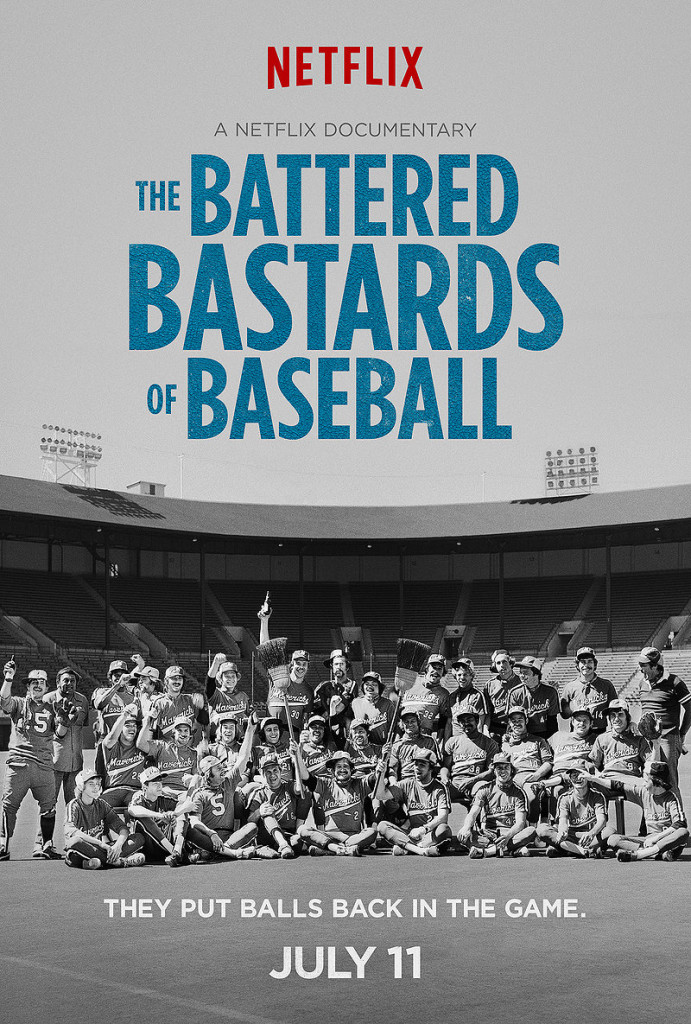 The Portland Mavericks were the most popular minor league baseball team in the country through much of the 1970s. They were the WKRP of sports, a highly photogenic, ragtag band of misfits with a host of issues and hearts of gold. The brainchild of actor Bing Russell, who formed the team when the Portland Beavers, a AAA-league team, moved to Spokane in 1973, the Mavericks were the only independent team not affiliated with any major league club. Russell’s project was considered a joke at first, but became a stunning success: not only could the Mavericks play, but they put on a damn good show. Sports writers were stunned, fans were ecstatic, but the businessmen behind the major leagues were livid. That all-too-common conflict of our modern capitalist society was sparked and battle lines were drawn as moneymakers once again tried to keep the little guy down, because the little guy always eats into the profit margin.

The Battered Bastards of Baseball, the newest documentary from Netflix, follows Bing Russell, best known to audiences as Deputy Clem Foster on “Bonanza” — the more discerning cinephile will recognize him as Red from Billy the Kid vs. Dracula (1966) — as he dreams up, then manages, the Portland Mavericks. Bing grew up working with New York Yankees legends such as Lefty Gomez and Joe DiMaggio, but a pro baseball career wasn’t in his cards, so he went to Hollywood and became one of the most recognizable character actors of the 1950s and 1960s. But his passion was always baseball, everything from the play to the business to the philosophy of it, and after years of hanging on the periphery of professional sports, Bing jumped right in when opportunity arose.

Featuring an extensive library of archival footage, all faded in that instantly-recognizable pinkish-brown way, Battered Bastards is a lot of fun to watch and as comfortable as an old pair of sneakers. Those were heady summer days in the 1970s, perfect afternoons spent watching A-league players goof around, get into fights and occasionally hit a ball past the Hair Barn and Royal Crown Cola ads. The Mavericks were crazy and rebellious and cool, bringing a real love to the game missing in corporate baseball; interviews from those who were there, including actor-director Todd Field, batboy for the team, and actor Kurt Russell, son of Bing and a Mavericks player in the first season, paint a delightful picture of an era we’ll never see again.

Yet, there is something missing. It’s all a little too pat, just a little too clean. A voiceover late in the film by legendary pitcher Jim Bouton and a handful of comments from interviewees hint at a much bigger story to be told. That larger story of the Mavericks, one that involves guns and fist fights and incarceration, is arguably more interesting, yet was almost completely set aside in the name of a more populist and crowd-pleasing narrative.

Though taken from the famous nickname earned by the 101st Airborne Division after the Siege of Bastogne, The Battered Bastards of Baseball never fully lives up to the hyperbole of its title. The Mavericks were a group of good-natured deviants, vagabonds who gave up good homes and steady jobs for one last chance at their Hall of Fame ambitions and became the embodiment of a peculiarly 1970s version of the American Dream, and certainly must have provoked emotions that extended far beyond the irritation of a few profit-minded suits. What of the fans in neighboring cities whose home teams had to play the Mavericks? Or of the summertime girls and the little kids who idolized these unlikely rebels? As Bing’s dreams starts to fade, he slurs his words, desperation in his voice and eyes unable to look anywhere but at his own feet; you feel for him, and wonder why no one in the film ever comments on it.

Any criticism of the Mavericks is all but side-stepped, too. Only the most positive of newspaper clips are shown, only the most sentimental of recollections told. It’s a documentary full of too-careful snipping and cropping and editing meant to put forth a single-minded narrative and avoid scary, inconvenient opinions from an audience that the film seems wary of. This tentative approach to what was obviously a group of hell-raisers in the middle of a decade not known for its subtlety gives the viewer cognitive whiplash, and by the time the where-are-they-now captions roll, it’s obvious enormous chunks of the real story have been chipped away, leaving behind only a pleasing facsimile.