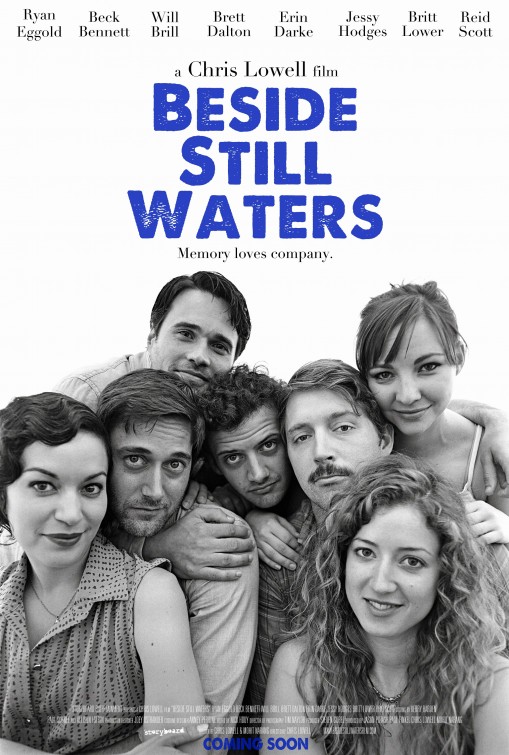 It’s The Big Chill for a new generation in Beside Still Waters, the inaugural directorial outing for actor Chris Lowell. Daniel (Ryan Eggold) gets the old gang together at his family’s lake house before it’s foreclosed upon, and soon tensions, loves and rivalries bubble to the surface, especially after it’s revealed none of them bothered to show up for his parents’ funeral just a few months prior. The friends are the usual monochromatic, Hollywood-eclectic sort: Olivia (Britt Lower), Daniel’s former girlfriend who brings her new, slightly older boyfriend with her; Charley (Jessy Hodges), the free spirit character responsible for all the drugs the plot requires; Tom (Beck Bennett), the token gay guy, and more.

Though the ensemble cast, for the most part, works well together, the characters are undeniably stereotypical. And it’s not immediately clear just how a group of people whose ages appear to span the better part of a decade are all childhood friends, or how someone who once had a significant career on the stage but is now reduced to reality shows could be the peer of a woman just beginning her master’s degree. This is a problem in a film that so blatantly compares generations: there is a thin thread of “Lost Generation” references throughout, and a hapless Gen Xer in their midst, as well as the group’s unseen parents, presumably members of the Big Chill generation, irresponsible Boomers who never taught their children the life skills they need.

That’s a lot of blame to go around, and very little of it directed at the people who truly deserve it. In Beside Still Waters, we’re treated to the antics of a group of maladjusted early 30-somethings who indulge in their precious selective nostalgia and carefully-tended indifference. Most of them have all the forced joy and spontaneity of a budding sociopath, the copious drugs and booze fueling the little hostility machines they possess where their hearts should be. It’s not as though they hide it: they play a game called “whiskey slaps” where they take a shot of whiskey, then slap someone in the face. You can’t get any more blatant than that.

It’s fascinating, but sadly, nothing comes of it. Sure, there’s the wistful, slightly ambiguous ending, and friends coming together to do one halfway decent thing before moving on with their lives, but it all rings hollow, because it seems so implausible that Daniel would have ever considered these people the kind to support him in times of need. His pathetic belief that these were good friends who had his back simply doesn’t jibe with the rest of Daniel’s character; his nostalgia and need never seem so overwhelming that they would prevent him from making more friends while at university or at work. And he certainly doesn’t seem like he would have been there for them, had someone else in the group been the first to suffer a serious loss.

Thankfully for Daniel, there’s a Gen Xer right there, some slightly older dude willing to hold his hand through his weak little Bildungsroman. Also fortunate is that all the blame can be placed on Olivia, a woman with problems that manifest in her daring to have agency over her own sex life. In fact, so much is wrapped up in who Olivia sleeps with that it causes narrative imbalance. There is nothing else in the film as stuffed with meaning and import, and comments on her behavior go far beyond the gossip of her friends and into the realm of a film declaring the sex lives of women to be a matter of public concern.

The visuals really hit the banality home in Beside Still Waters, a series of standard mid-shots, shadowy and carefully cropped nude scenes, and the hand-held faded look for video cam moments — because no one owns a smartphone, apparently — and all at a lovely cabin on the lake, the low-budget location of choice for indies in the new millennium. And the shame of it all is that there really is something interesting going on in Beside Still Waters. It’s all but invisible, deeply hidden like a scared child who doesn’t want to be found, but it’s there.