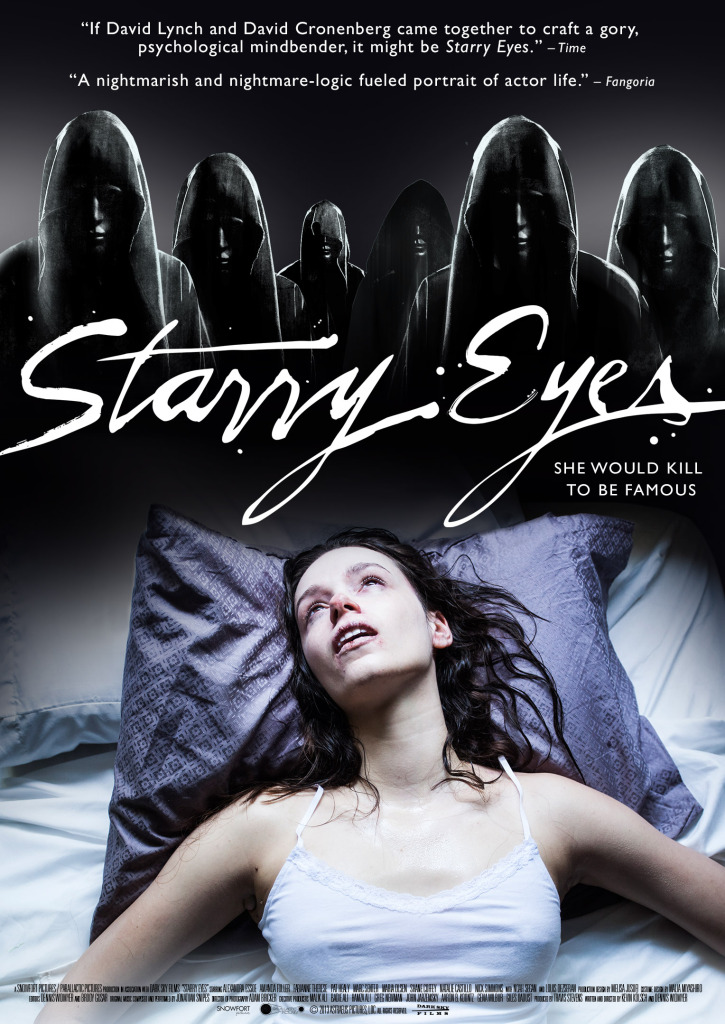 Sarah (Alexandra Essoe) is just one of thousands of struggling young actresses in Los Angeles, a nice girl stuck with crappy friends and a demeaning job, desperate for auditions and waiting for callbacks that never come. No one is more shocked than Sarah when she lands an audition with a big studio, but competitive and disbelieving friends, an inappropriate boss and her own uncontrollable insecurities wear at her. When she thinks she’s blown an audition, she falls back on a frightening habit: yanking out chunks of her own hair. It’s a gruesome act of both self punishment and self soothing, and it’s when she accidentally reveals that hidden reservoir of anger in an audition that she finally gets a chance at stardom.

In Starry Eyes, those dreams come at a grisly price. Filmed deep in Old Hollywood territory, primarily at the old Howard Hughes offices on Romaine in L.A., Starry Eyes is nestled firmly between Hollywood’s cynical, smog-filled present and its rich, glamorous past. It’s Rosemary’s Baby by way of Mulholland Drive, a grim world where success comes at a price no one should have to pay. But it’s a world where the woman in distress is, in a perversely refreshing change, less defined by her victimhood than her choices. She’s being taken advantage of from all sides, but she’s savvy enough to know that she has some control over the situation by accepting the reality others created long before she ever arrived. In Hollywood, it’s tit-for-tat for a woman like her, and she can either shake it for tips at a low-rent knockoff of a Hooters restaurant or give it up to someone who can put her in movies.

The problem, of course, is that this tit-for-tat even exists, that people in power will reward only those who they can manipulate. But the idea of taking on this long-standing system is far outside the purview of Starry Eyes. That kind of David and Goliath plot is just a Tinseltown dream, after all, and Sarah, for all her outward bright-eyed hopefulness, is a secret cynic, a woman whose grasp on reality is astonishingly tight. The look on her face when she realizes that she can give her favors to some nobody indie filmmaker for a role, or to a powerful producer at a legendary studio, tells you everything you need to know.

Starry Eyes is graced with a terrific supporting cast, featuring Maria Olsen and Marc Senter as the sinister and efficient casting directors, plus Pat Healy adding real depth to a thankless role and veteran stage actor Louis Dezseran is at his slimy, manipulative best. Alexandra Essoe is the real stand-out in Starry Eyes, giving an astonishingly controlled and nuanced performance. Her Sarah is complicated in a way damsels in distress rarely are, and much of that has to due with her subtle movements in the quieter scenes. Her interactions with Carl (Healy) in his office are sublime and darkly humorous, and in her interview with the producer, Essoe gives Sarah her best Veda Pierce smile: glowing, practiced and unnerving.

That’s not to say Sarah is not plagued with insecurities, because it’s those very insecurities that brought her to the attention of Astraeus Pictures in the first place. Caught ripping her own hair out in bloody chunks after what she imagined was a failed audition, Sarah is encouraged by the hilariously upsetting casting director (Olsen) to go through a series of soul- and body-baring auditions. She so impresses the casting director that she finds herself summoned to a late-night meeting with the producer, a heavily tanned, slick-haired guy with the kind of light-blue eyes no one should ever trust. “Ambition,” he tells Sarah, “is the blackest of human desires.”

It’s that desire that powers the Hollywood Sarah lives in, a Hollywood full of bland neighborhoods, unkempt back yards and nothing to look at in the night sky save some haze and a whole lot of ugly power lines. And what happens to Sarah is even uglier: under the inexplicable control of Astraeus Pictures, she transforms from budding ingenue to murderous psychopath. As Sarah transforms, so does Starry Eyes, into a relentless gore fest with plenty of blood and screams for even the most hardened horror fan. It’s a chilling ride, a grotesque Cinderella tale in a world where you have to kill to live your dream.