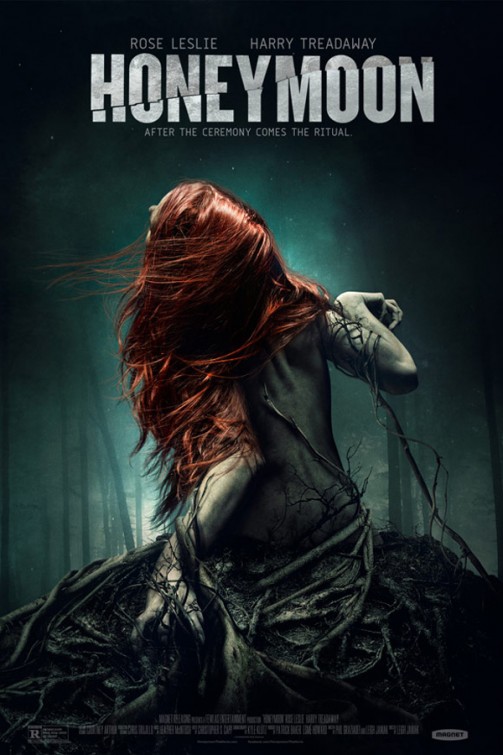 “Amongst all the savage beasts, none is found so harmful as woman.”
John Chrysostom, as quoted in The Bridal Bed (Joseph Braddock, 1961)

Newlyweds Bea (Rose Leslie) and Paul (Harry Treadaway), suffering from acute hipsterism and chronic adorableness, make their way to a belated honeymoon at her family’s vacation home, a cabin located, as they say, in the woods. It’s a silly premise, and it’s to first-time director Leigh Janiak’s credit that Honeymoon overcomes such a dire opening to become an intriguing, tight little film. Once the newlyweds arrive at the lakeside cabin, their enthusiasm unsurprisingly turns into an awkward period of adjustment, each revealing some slightly off-kilter habits and weird turns of phrase. When the couple run into Bea’s childhood friend Will (Ben Huber) and his sickly wife Annie (Hanna Brown), things turn from awkward to uncomfortable.

Paul is responsible for most of this attitude change. Very early on, he seems to be experiencing a perverse kind of buyer’s remorse, marriage triggering some very unappealing and base behaviors in him. His wife’s physicality unsettles him; her self-reliance baffles him. By the time Bea is found in the middle of the night, naked and freezing in the woods after an episode of sleepwalking, he only briefly considers she may be in trouble, and instead suspects she had been hooking up with Will. Clearly, it took precious little for Paul to assume his new wife, like the femmes fatales of old, was a duplicitous seduction machine, unable to even wait until the honeymoon was over before putting on her prettiest lingerie and cheating with the only other male human being within a 20-mile radius.

It’s the fear of the feminine that powers this no-budget horror flick: Bea’s strength, free will, her sexual past, her bleeding and even her lack of skill in the kitchen all pointing, in Paul’s mind, toward something ominous and frightening. Unfortunately, Honeymoon shares Paul’s perspective, but not intentionally. The film plays toward ambiguity to an extent, suggesting the husband’s paranoia and self-absorption are masking a more sinister problem, but all this is undermined by some very early scenes that point toward external, possibly even paranormal, explanations. These unexplained moments are unfortunately framed in the dullest way possible, ripped straight from Paranormal Activity and all its hangers-on, which is a shame as the cinematography is otherwise very solid. A few missteps aside, it’s a visually evocative and troubling film, with bloody, gruesome moments made more unsettling against the sunny, wish-you-were-here postcard aesthetic of the lakeside cabin.

There’s a nuance to the way Honeymoon unfolds that makes it incredibly compelling. Just enough is kept from the audience, and the newlyweds, though frustrating, hold our attention. Rose Leslie gives a remarkable turn as Bea, subtly navigating personality changes without losing the audience’s interest or compassion. Her performance does more to flesh out the film’s idea of personal memory as identity than the script ever could, and both she and Treadaway manage to sell some almost impossible dialogue. It’s thanks to their authenticity and humanity that what seems like the inevitability of an implausible shock ending is not so inevitable after all.