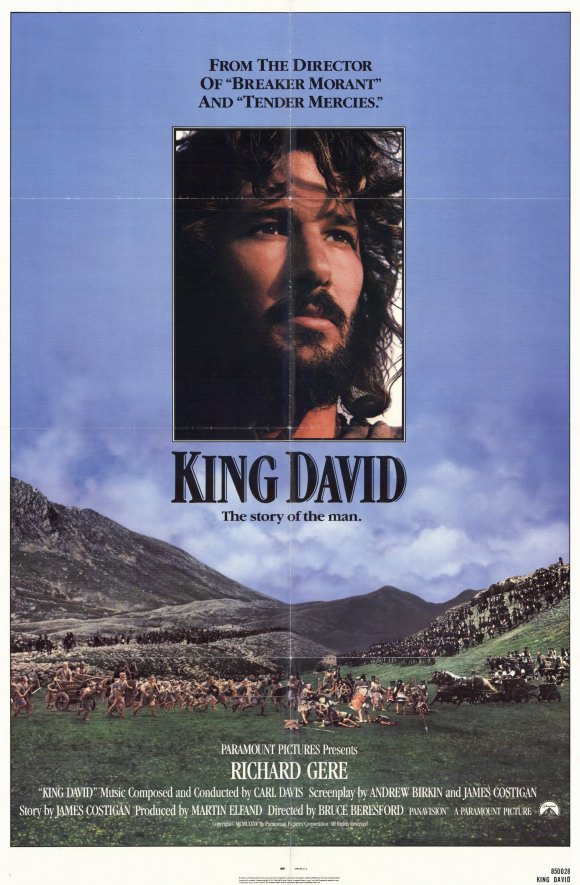 There is no shame in watching a movie because it’s aesthetically beautiful. King David, the 1985 Biblical epic directed by Bruce Beresford, is just such a beautiful film, exciting and epic in scope. But, as Vincent Canby wrote in the New York Times, it is not a good film. The Australian Beresford, whose Breaker Morant (1980) and Tender Mercies (1983) had made his name in the United States, imbues his films with a quiet, almost intellectual tone, an underlying civility amongst cultural chaos. It’s a terrific way to approach the story of David, the second king of Israel and Judah, alternating a light philosophical touch with the fire and brimstone of the Old Testament tales.

It’s not, however, the best way to approach the story if one means to be historically accurate. The prophet Samuel (Denis Quilley) opens the film with some rather startling pronouncements that come straight from the man upstairs, and he seems almost immediately out of place amongst the gentle souls around him. The same goes for King Saul (Edward Woodward), who at first is scolded by Samuel for ignoring the word of God, but then becomes the absolute embodiment of Godly wrath. Woodward is terrific, the apotheosis of a character actor whose sole presence ties an entire film together. But he does not blend in amongst a cast comprised of 99.44% young brunette men made up to look like members of a mid-80s corporate rock band.

Speaking of gorgeous young brunettes, Richard Gere plays the title role, his lone American accent hardly meshing with the Biblical British around him. With all the trouble taken to secure terrific location shots, to use classical Judeo-Christian paintings as templates for some of the more spectacular framing, and to use the words of the Bible to tell David’s life story, a little time could have been spent on creating a King David who was believable. Neither Gere nor Ian Sears as young David are convincing, especially when the film attempts historical accuracy with song and dance. The few moments that attempt authentic early civilization look very silly against the sleek, dazzling veneer of the 1980s.

Gere is too inherently gentle — dare I say meek? — to convincingly play a complicated man like David. Despite the Biblical theme of David being in God’s favor because of his gentle nature, David falters as he gets older and his power becomes greater. Gere tries to achieve this complexity, and he’s effective at times, but it’s impossible to forget how out of place he is in this film. What is pretty nice, and I say this without irony, is how his David becomes progressively more gorgeous as he falls from his earthly grace. Like Keanu Reeves’ surfer accent getting stronger and more obnoxious as Point Blank goes on, it’s alternately wonderful and ridiculous.

There are approximately six hundred and ninety-five baquillion extras in King David, which means you are in for a real treat when it comes to the battle scenes. The location shots are simply beautiful, featuring a lot of right angles and classically symmetrical shots. As anachronistic as they are, you cannot complain about the costumes, because they are lovely. And Gere is just distractingly sexy in this film, so much so that he is often framed in medium-long and long shots to try to tamp that sexy down, but you cannot, because it is Richard Gere and this is 1985.

Like all good Biblical epics, King David sports some terrific character actors, such as John Castle and Hurd Hatfield, as well as Alice Krige as Bathsheba. There is drama and incest and war and a whole hell of a lot of people die. The rather stereotypical approach to David the man, however, the attempt to make him seem special because he is so effortlessly strong without overt displays of machismo, takes a kind of acting finesse Gere just can’t quite handle. A decade more acting experience and he would have been fantastic in the role, but King David was made during his eye candy days. But again, as we have already established, there is no harm in watching a film because it is beautiful.

The Warner Archive DVD is a re-release of the prior, now out of print, Paramount version.