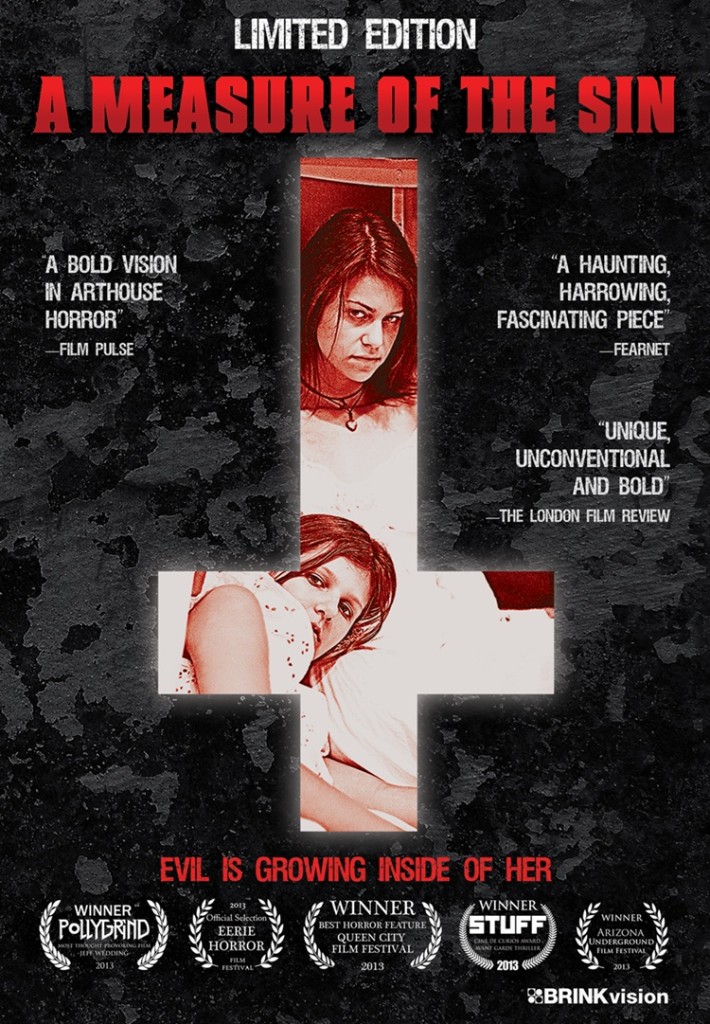 A childhood spent in the safety of a mother’s care becomes a nightmare straight out of the Old Testament in Jeff Wedding’s A Measure of the Sin. This chilling underground horror film follows the life of 20-something Meredith (Katie Groshong), one in a trio of beautiful young women living with The Man (Stephen Jackson) in a dilapidated farm house, away from civilization. This nameless, almost-elderly patriarch of what must surely be a cult essentially owns the women who, just like a bad joke from the 1970s, are comprised of one brunette — Meredith — as well as the blonde Alicia (Starina Johnson) and the redhead Ruth (Dale Rainey).

Alicia and Ruth are content to spend their days bathing together, brushing each others’ hair, giggling and standing around nude. The two court the audience’s gaze, their allure less provocation than a blatant accusation. But Meredith demurs, wanting no part of their frolic but only to leave The Man, the isolation, and the enormous black bear that torments her at night. It’s a bear only she can see, and she believes it to be the father of her child. Despite the pregnancy, Meredith makes her plans to escape. We see her childhood education must have been truncated when she and her mother embarked on a trek through a world rich with the bounty of the land, yet full of snakes. An even more distant flashback shows her mother meeting The Man when he was young; perhaps her mother already knew of those snakes, and chose to leave anyway.

A Measure of the Sin, based heavily on the works of Kristy Nielsen, who also co-wrote the screenplay, is brutal and thought-provoking. The film examines the high emotional cost of freedom for the individual, and the price society pays when choice is denied to those who by all rights deserve it. There is also a tough examination of sacrifices one must make to prevent the atrocities of the past from being repeated.

This ultra-low budget flick has a palpable vintage feel, reminiscent of the grindhouse and exploitation horror of the 1970s. Shot on 16mm, the whir of the cameras is almost comforting, as is the easily-recognizable aging of the film stock; some colors have disintegrated, while others have become impossibly bright and thick. Despite the almost expected uneven performances common to low-budget films and obvious cost-cutting measures such as an overreliance on narration, A Measure of the Sin boasts an impressive tonal consistency and direct, unapologetic artistic vision.

A Measure of the Sin has been screened at a host of film festivals around the country, and is now available in a limited-edition DVD via Brink Vision, as well as for rental on Vimeo and Amazon.