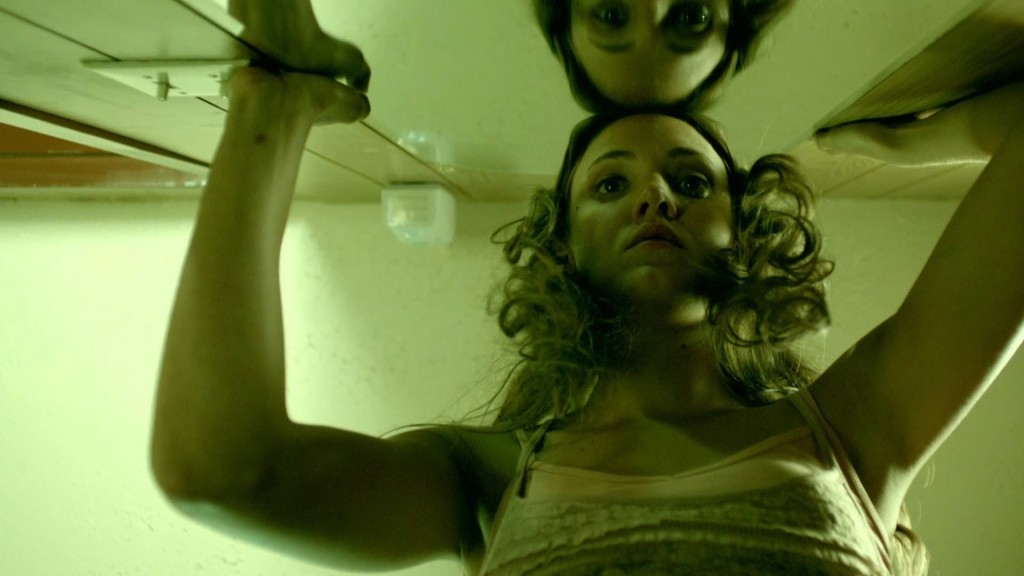 Esther (Alexia Rasmussen), a heavily pregnant woman on her way home from a routine ultrasound, is jumped by an assailant, knocked unconscious, her abdomen repeatedly smashed with a brick. It’s an attack more on her unborn child than on her, and despite an emergency Caesarian, shown in graphic detail, the baby doesn’t survive. A meeting with a curt hospital counselor leads Esther to a support group and fellow grieving mom Melanie (Alexa Havins). With no one else to talk to, Esther finds herself drawn to Melanie, more so after catching her in a bizarre scam at a local mall. Their relationship escalates into a symbiotic nightmare, tragedy feeding on tragedy, with truly frightening results.

Director Zack Parker’s Proxy (2013) is a psychological thriller with moments of heavy gore and vulgar, dark humor. Despite an interesting premise and deft handling of several shocking plot twists, this is a film without much bite, thanks to being far too concerned with imitating director Brian De Palma’s signature style. There is no reason or purpose, no homage is intended; rather, the film inexplicably and randomly interrupts itself to indulge in moments of crude, tone-deaf mimicry of De Palma’s early works, a cynical gimmick in a film that certainly didn’t need one.

Proxy, despite the missteps, contains some solid sociocultural commentary running underneath its shiny indie-horror facade. It’s heavily implied that Esther became pregnant for bizarre and troubling reasons, and hopes to do so again, despite her recent trauma. She has a complicated relationship with her girlfriend Anika (an amazing Kristina Klebe) and even more complicated friendship with Melanie. When Melanie and her husband Pat (Joe Swanberg) suffer a tragedy, their lives become inextricably tangled with Esther’s and Anika’s.

The film makes some interesting observations, especially regarding heterosexuality and the so-called nuclear family, which allows people to pretend to normalcy and get away with terrible things, while non-hetero couples have no such luxury. It’s no coincidence the lesbians in this story are the ones who are jailed, shot, shrugged off by those who are meant to help them, isolated and alone, while the straight couple wallows in tragedies of their own making.

Also no coincidence is Pat’s ultra-violent behavior that, in a world of Stand Your Ground laws and “acceptable torture,” is sadly tolerated in the real world, not just by audiences. Proxy is ultimately about what harms society as a whole, how the future is disrupted — interrupted — by antisocial behavior, even if that behavior is technically protected by law. But by tying all this so heavily into motherhood, Proxy flies a little too close to the “bitches be crazy” cliché. Swanberg’s uneven, unintentionally funny performance reinforces that idea as well, erasing all intended menace to his character.

Again, it’s a case of the film getting in its own way and not allowing itself to fully explore its own themes, as though it were afraid of being seen as serious or, heaven forbid, earnest. Despite this occasional undercutting of itself, Proxy contains some fine performances and moments of shockingly good special effects. Unnerving and truly surprising, Proxy is a fascinating film.