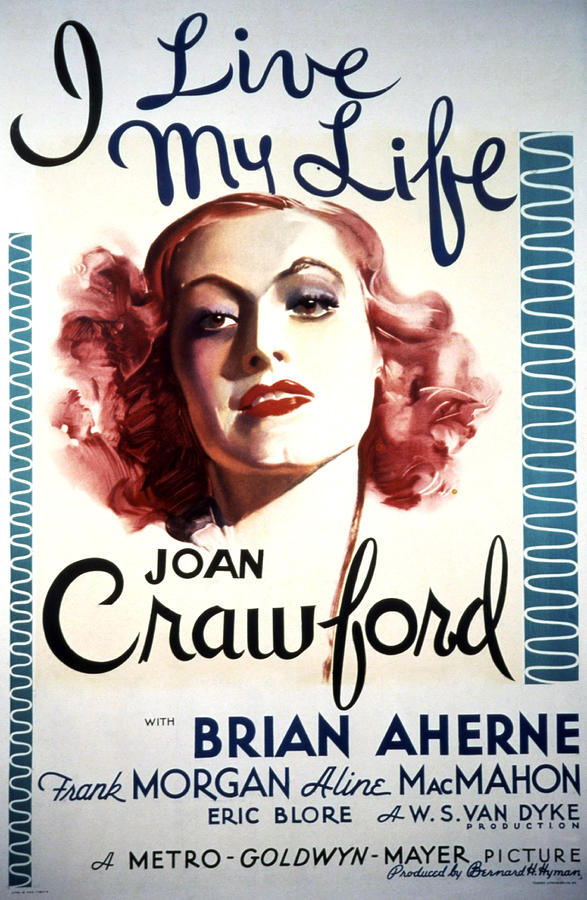 Spunky, beautiful heiress Kay Bentley (Joan Crawford) decides to go ashore when her father’s yacht docks in the Greek Islands. While there, she meets handsome Irish archaeologist Terry O’Neill (Brian Aherne) on an important dig, and after the standard debutante flirtation-via-irritation method doesn’t work, she decides to try again the next day. Discovering he has no time for useless rich party people, she pretends to be her father’s secretary. It works, and the two spend a romantic day together. 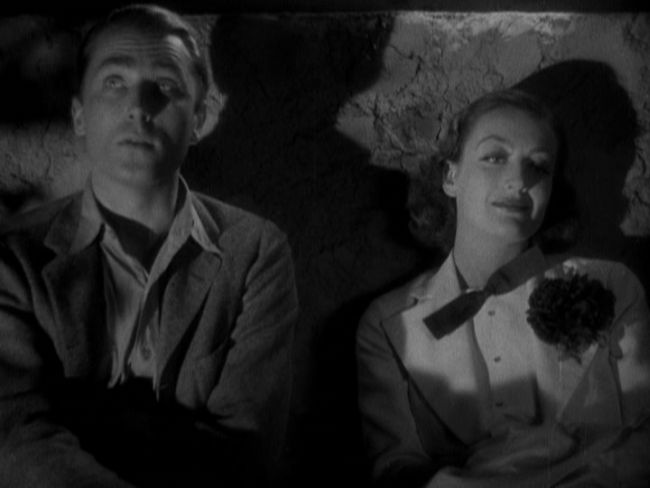 He promises to travel to New York City to meet her, but because Kay is a spoiled brat, she has no intention of following through; besides, she never told him her real name. Terry tells his fellow professors and archaeologists, including one Betty Collins, played by a woefully underused Aline MacMahon, that he’s going to New York to get married. Unfortunately, he discovers the woman he has been writing all these months really was the secretary of millionaire industrialist G.P. Bentley (Frank Morgan), and not Kay at all. But in no time Terry discovers Kay’s true identity, that she’s a typical trustafarian with a few dozen upper class twits as friends. A few pointed words later, Terry leaves, and Kay starts to wonder if she really did care about him after all. 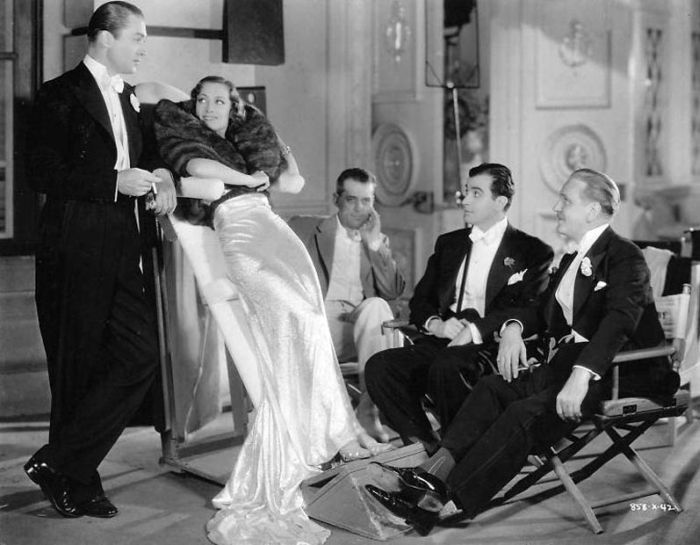 Joan on a leaning board, with Brian Aherne, W.S. Van Dyke, Fred Keating and Frank Morgan during filming of I Live My Life, courtesy A Certain Cinema.

Kay is meant to be your typical young debutante, the kind of role tailor-made for a young ingenue, not a woman pushing 30. Joan is really too old for the part, and it shows, mostly in her inability to act perky and flighty. But she is stellar in the more sophisticated scenes set in New York, and has terrific chemistry with Frank Morgan, who plays her father, making this one of the best father-daughter relationships of any 1930s film. Brian Aherne is also exceptional, one of those lesser-used male leads like Ian Hunter and Colin Clive in The Girl From 10th Ave (1935) who puts in an actual performance, rather than just walking through and collecting a paycheck. I’m lookin’ at you, George Brent. 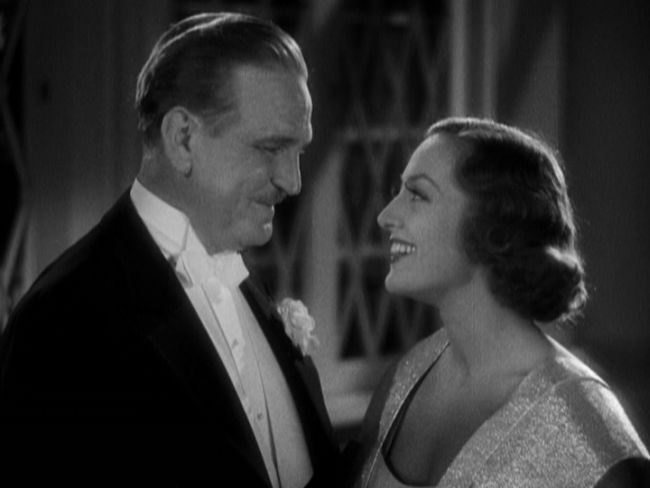 A few sets are surprisingly dull, which I imagine, despite having no proof whatsoever,  is due to the rest of the sets that MGM obviously splurged for. And if you know MGM, you know that when they splurged, they splurged, probably leaving only about six cents and some lint left over for the remaining scenes. The outdoor scenes in Greece are lovely without exception, even if it is California-as-Greece-plus-bluescreens. There is also one museum set in particular that is very nice.

But there’s this a strange moment in a ballroom where, though this is an MGM film, the set looks so much like a re-dressed Warner Bros. Stage 28 that it’s startling. This is I Live My Life: 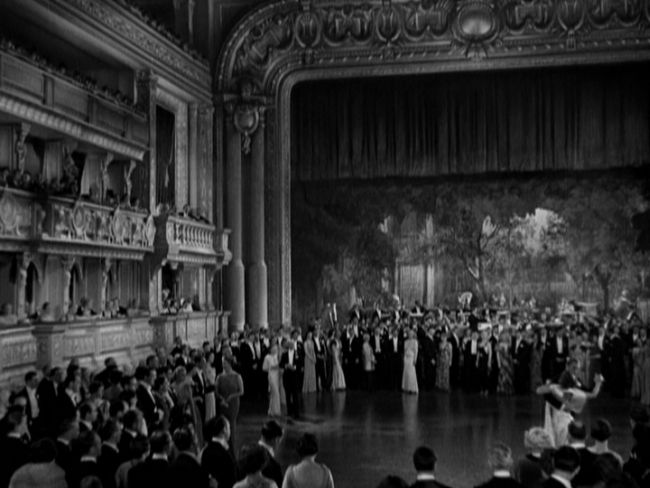 Now, compare with a Phantom of the Opera-era photo of the Warner Bros. set: 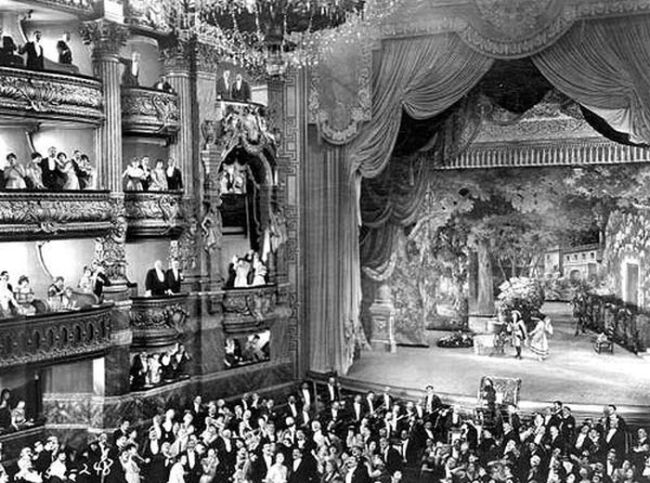 I can’t imagine that the ballroom used for I Live My Life is the famous Studio 28, but I think it’s safe to say the MGM set was based on it.

Fans of Joan’s mid-30s fashion plate period will love I Live My Life, which features her in ultra wide collars, Adrian gowns and eyelashes for days. In this period, audiences cared more about her gowns and studio portraits and Hollywood lifestyle pieces than her acting. It’s easy to see why the prickly Bette Davis would scoff at the idea that Joan was her competitor; strictly speaking, Bette had deposed Joan’s true peer, Kay Francis, as “Queen of Warners,” but the two actresses were in no way comparable, not until a bit later in their careers. 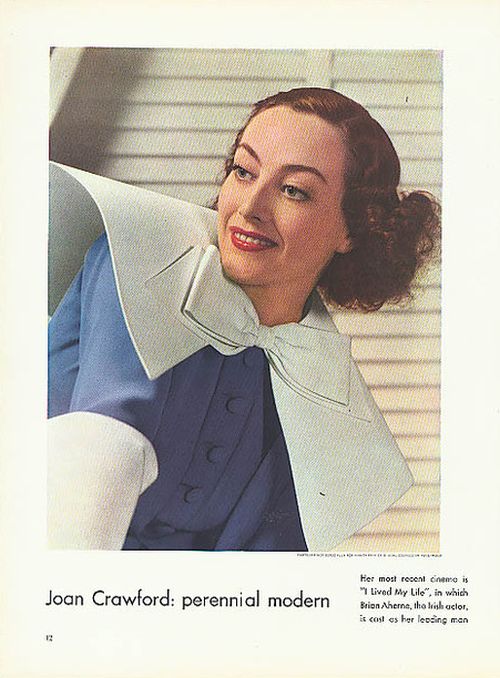 A photo from Vanity Fair’s scientific report on the dangers of Joan Crawford’s collars, “Unsafe at Any Width.”

Speaking of Adrian and glamour and advertising and Joan, there were literally dozens of photos taken as promotionals for I Live My Life. Here are a few in some of the Adrian gowns from the film: 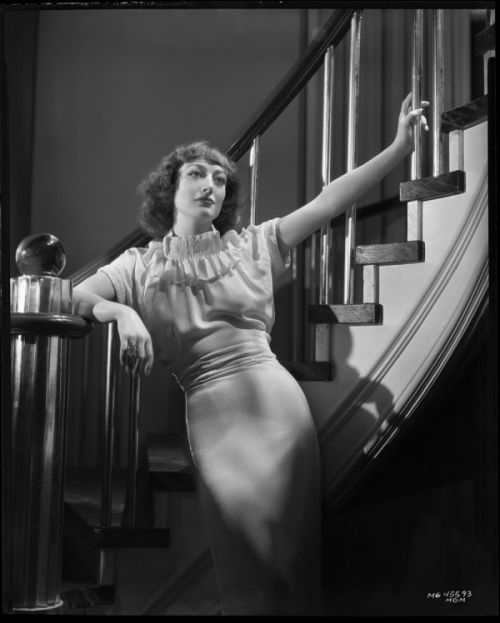 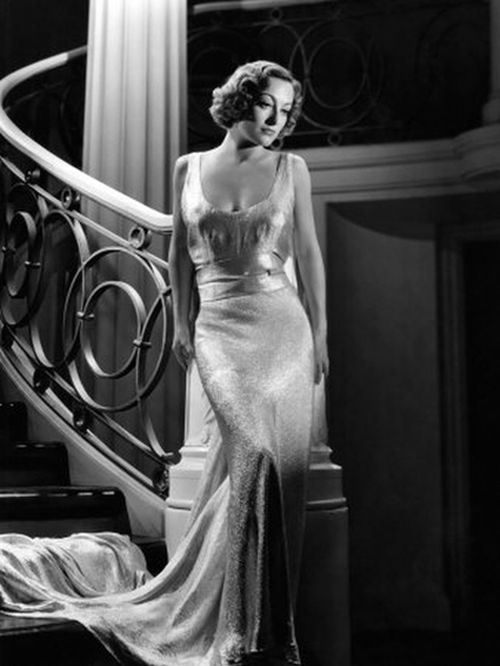 I’m unsure if the wedding dress — well, one of them, anyway — from I Live My Life was an Adrian creation or not. There must be some nice studio promo pics of the dress out there, but I of course could not find them, so you’ll have to make do with a blurry screencap: 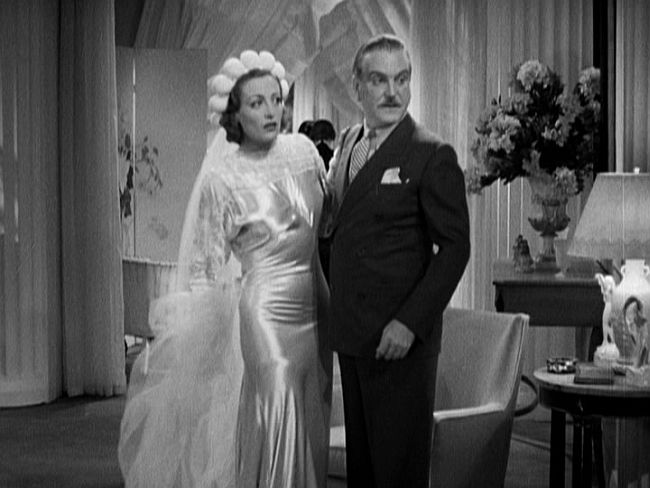 The dress as it looks today, courtesy Joan Crawford Best. 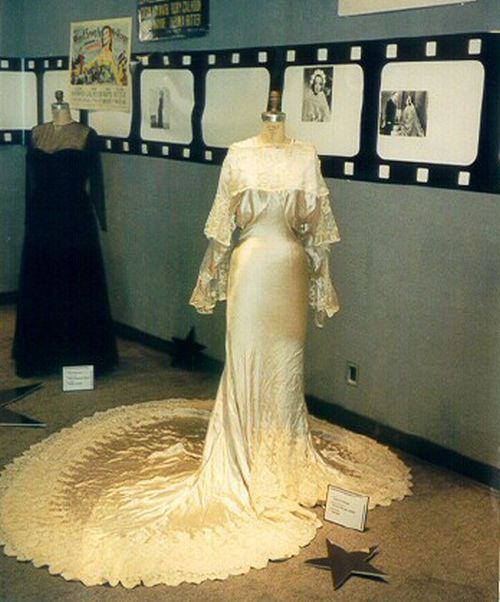 I was surprised to see this dress still existed because… well, watch the movie.

Besides the dozens of portraits of Joan in gorgeous gowns, there was also a series of stunning close-ups from famed portraitist George Hurrell: 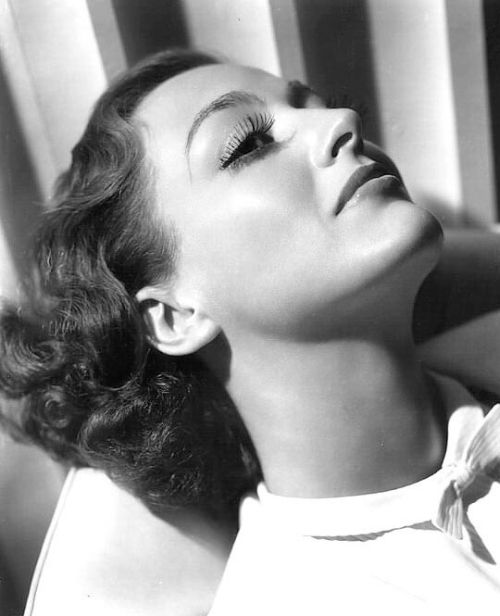 You can see this picture and more at Joan Crawford Best.

Warner Archive didn’t use the iconic poster for their DVD cover, for reasons that I’m sure seemed logical at the time, and honestly, if it gets the terrific Brian Aherne on the cover, then I’m okay with their choice. But the iconic flame-haired portrait is fabulous, all glamorous and wild, and has absolutely nothing to do with the film, which makes it perfect.

A while back, this original canvas by the artist — with Joan’s photo still attached — made the rounds on the internet, but today this was the only photo I could find: 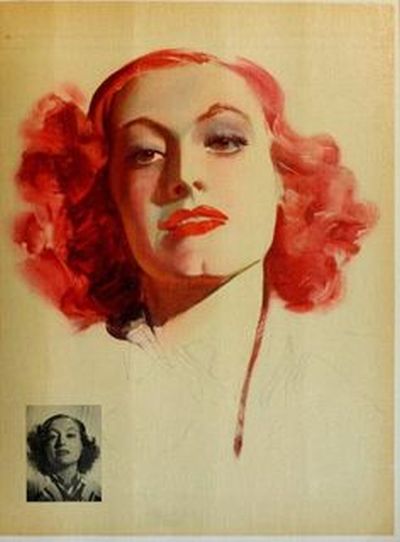 Would it surprise you to know that the poster was based on yet another Hurrell portrait? 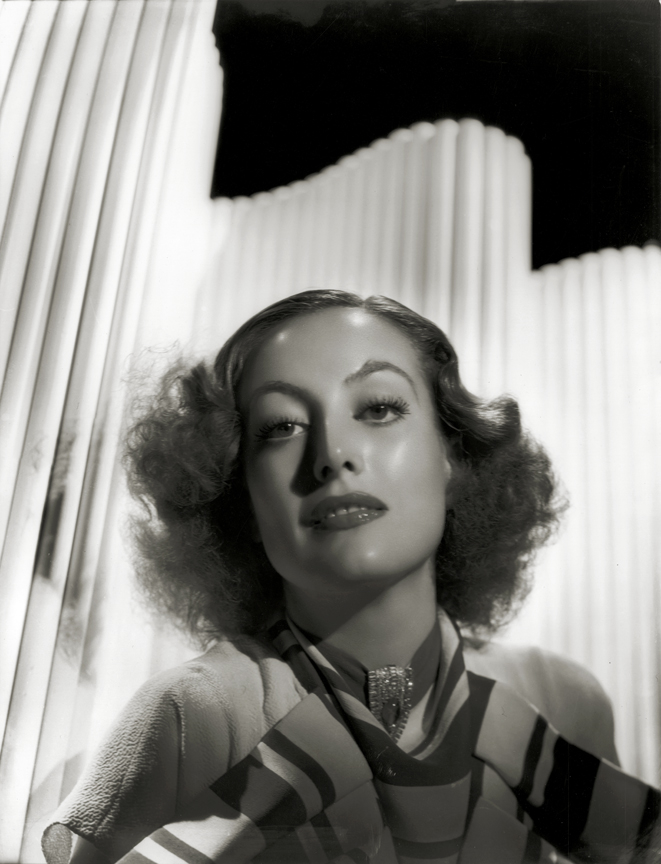 This was taken as one of the publicity portraits for the 1934 film Forsaking All Others.

I Live My Life was intended as your standard MGM programmer, but nothing Joan Crawford ever did could truly be called “standard.” It’s a fun little flick, currently available at Warner Archives on a MOD DVD.