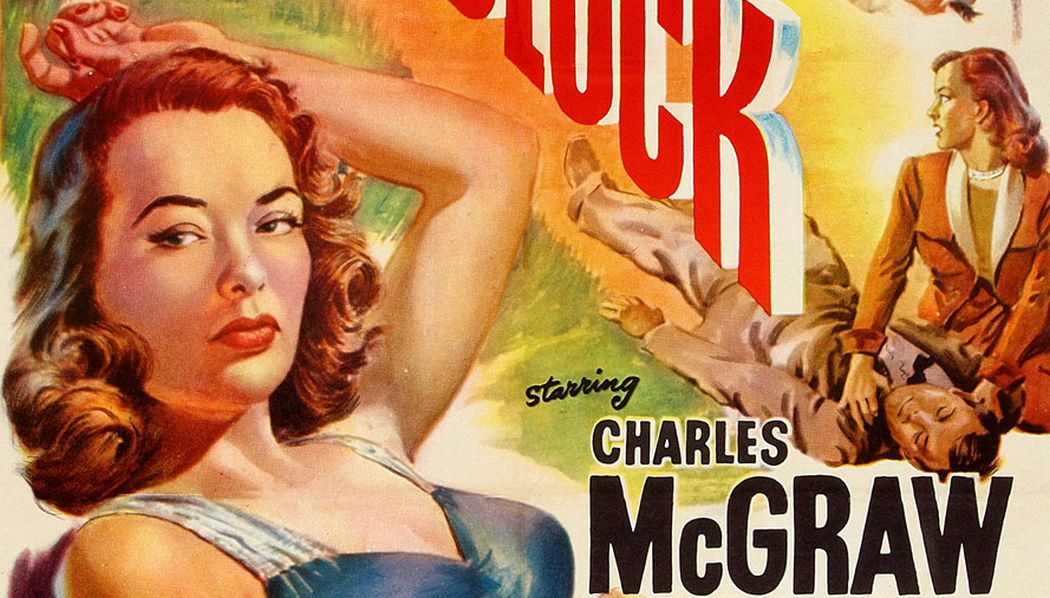 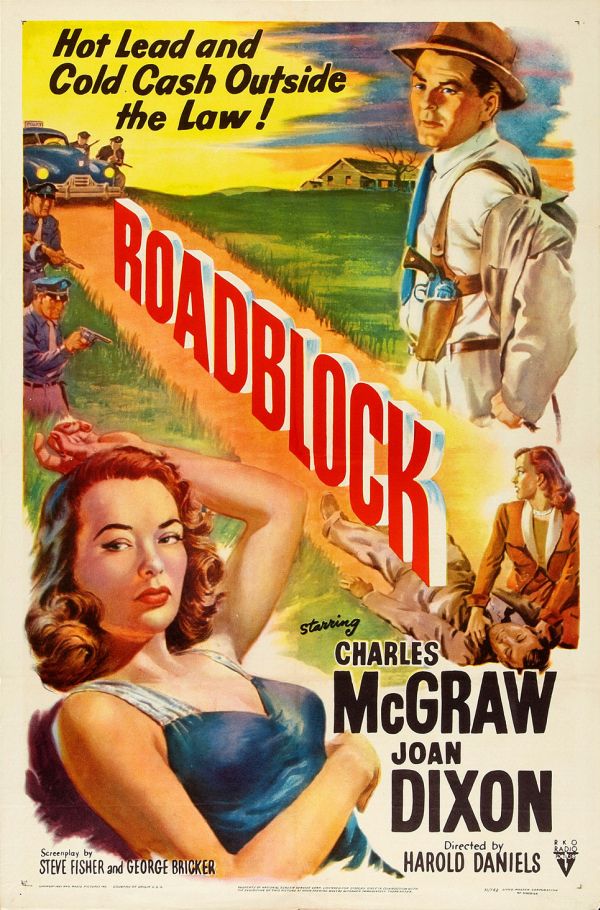 There’s probably no such thing as a nice, quiet little film noir, but Roadblock is as close as you can get. It’s likely that director Harold Daniels just stumbled into this low-key style that works so nicely within the genre — Daniels was known for very little except television and those terrible horror flicks that inevitably starred a Chaney or a Carradine — but we’re all thankful, however he arrived at his subdued style, because Roadblock is a real gem of a film. 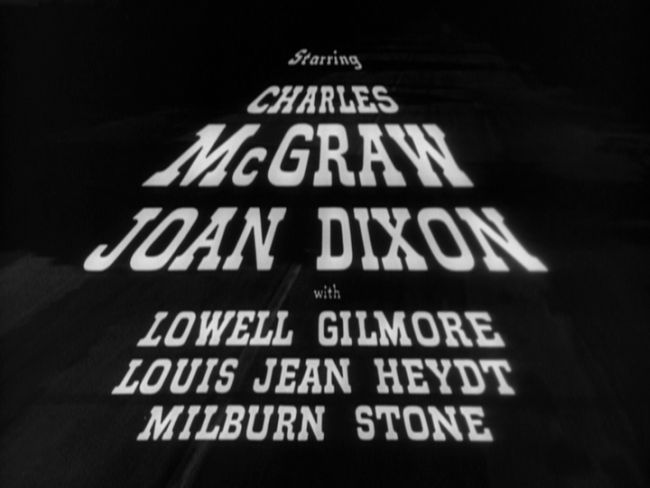 Joe Peters and Harry Miller are two hard-hitting insurance investigators, the old-fashioned P.I. type that became a staple of the noir genre in the late 1940s, who aren’t just partners but pals. When flying home after a job, Joe (Charles McGraw) finds himself as a patsy for the beautiful Diane (Joan Dixon), who uses him to get a discount married rate — and to have another name — on her plane ticket. Irritated but intrigued, Joe lets himself fall for Diane after the plane is forced to land in a small town, where poor Canadian actor John Butler as the hotel manager tries for a down-home Southern Missouri accent but achieves some weird dialect that sounds like Appalachia by way of Brooklyn.

Even after Diane tells him that she’s looking for a man with money, the kind of guy who will set her up in a nice place with nice clothes, Joe can’t get her out of his mind. Days later, as Joe follows notorious hood Kendall Webb (Lowell Gilmore) in his investigation of a fur robbery, he discovers Diane is Webb’s new moll… and positively dripping with furs. None of her duds are the stolen items, but Webb remains under heavy suspicion and Joe remains obsessed with Diane. Out of the blue, he comes up with a plan: Use his insider insurance company information to sell secrets to Webb about important shipments, allowing Webb to steal the items and giving Joe a cut, and a big enough salary to entice Diane. 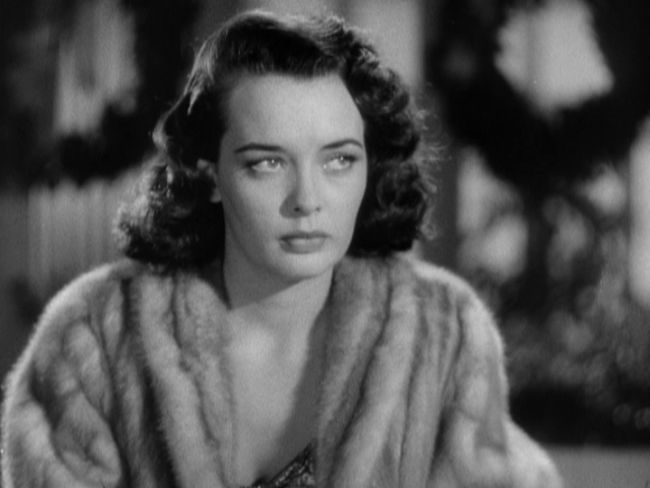 Alone at Christmas, Diane begins to realize she has made a serious vocational error.

But this is a noir, and there’s a snag in the plan: Diane has changed. She drops the ice princess act and learns love really does conquer all, and runs to Joe, happy and willing to be his wife no matter what his salary is. Joe considers getting out of the racket with Webb, but his insecurities start to mount. His worries about Diane becoming stifled and bored with a lower middle class life are obviously based on a much deeper, entrenched insecurity on Joe’s part, the usual concern of not being enough of a man who can provide his wife with what she needs, and that’s on any level, not just financial. So Joe stays with the scheme, and though Diane tries to talk him out of it, she’s strangely acquiescent about his decision.

These unspoken emotions are the real attractions of Roadblock, McGraw absolutely nailing the conflict and insecurity underneath Joe’s professional exterior. We already know Joe and his partner are willing to bend the rules when needed, and for a while, his scheme doesn’t seem all that far removed from the tactics he uses when on the right side of the law. Joan Dixon as Diane has what we politely refer to as having a limited range, but in Roadblock, it works. There’s so much going on with Diane that we can only guess at, and Dixon’s singular facial expression keeps us interested despite ourselves. 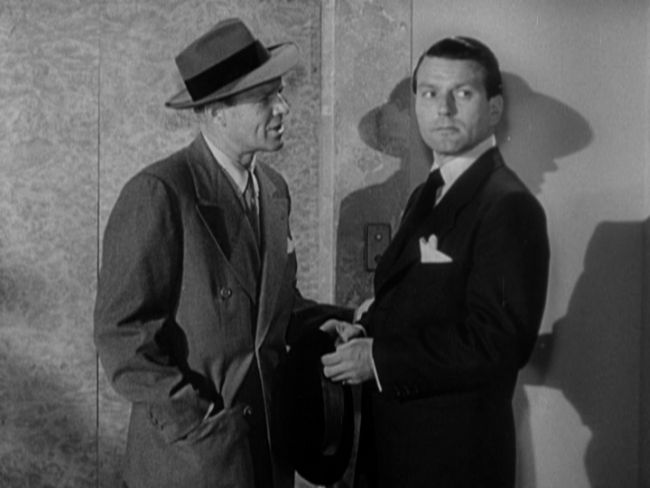 The situation runs the gamut from complicated to disastrous in quick order, thanks to a straightforward plot and a tight running time of 73 minutes. The finale filmed in the dry L.A. river bed is spectacular, and the best I can tell, it’s one of the earliest films to have used the aqueduct for a car chase scene. Roadblock is one of the best lesser-known noirs out there, a great little B movie from RKO that’s definitely worth the watch.

Roadblock is out on MOD DVD from Warner Archive in a print that looks really lovely, though there are no extra features and some sound issues in the back half, primarily that low hum that those of us who used to watch old films on late-night local TV will recognize all too well. It sounds best when out of TV speakers and not through headphones, and isn’t distracting, but is noticeable.