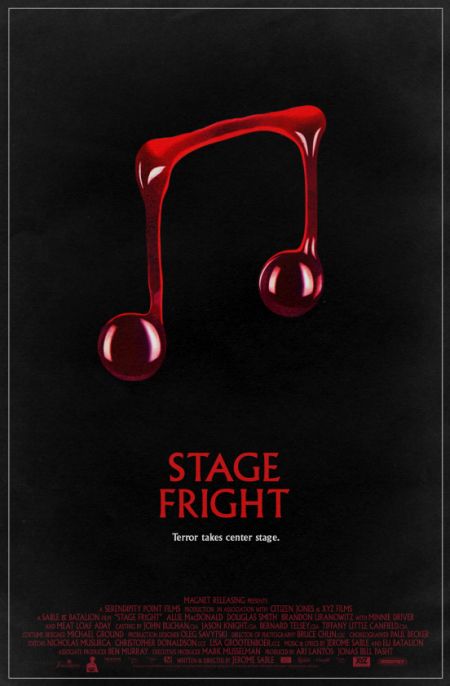 It’s too late to deny that the indie horror genre has been weighed down under what can only be described as a full-blown glut of Brian De Palma imitators. A few years ago, if you saw a De Palma rip-off, you could at least think, “Thank God it’s not Lynch.” But the tipping point has been reached, my friends. No longer are indie aficionados forced to endure movies containing a minimum of 70% content stolen from Lost Highway, but rather horror spoofs covered in Karo and red food coloring and so full of smug self-referentiality that, per Einstein’s theory of special relativity, these films are seeing themselves passing the other way before they even get there.

Stage Fright, the latest film from writer-director Jerome Sable, is sadly part of this trend. A horror-rock opera that wishes it was “Glee,” Stage Fright concerns two children whose beautiful mother was brutally murdered the night she became a star in a Broadway production of “The Haunting of the Opera.” A gruesome and highly effective opening sequence set in flashback tells that tale, then we segue into modern day, where her children, now teens, are forced to work long hours in a kitchen for their cruel… well, not step-father, exactly, but their dead mother’s boyfriend, Roger McCall (Meat Loaf). He’s no longer a Broadway player, now reduced to running a summer theater camp known as Center Stage.

It’s a fairy tale beginning to what unfortunately becomes a lifeless drudge. Kids from ages six to eighteen, all sporting a litany of bad outfits and specious haircuts, arrive at Center Stage hoping to become a star; one background student is dressed like Liza Minnelli, for no discernible reason other than it’s a recognizable look. Camilla (Allie MacDonald) dreams of being a famous singer just like her slain mother, while her brother Buddy (Douglas Smith) disapproves, hoping Camilla will come with him to open their own restaurant.

When Camilla hears that McCall has decided to produce “The Haunting of the Opera” at Center Stage, she finagles an audition and wins a chance at the lead role. But she has to compete against the ruthless Liz Silver (a terrific Melanie Leishman), who is willing to do absolutely anything to the director to guarantee her place on opening night. Complicating matters is a mysterious hard rocker living underneath the theater, determined to ruin this production of “Haunting,” just as its first performance many years ago was ruined by the star’s untimely demise.

There’s not a lot to be said about a Phantom who is a heavy metal enthusiast; the general concept was done by De Palma and — it has to be said — KISS decades ago, and the fact that this masked Phantom sounds exactly like the Antichrist character from “American Dad” is only one of many examples of the film quoting from a variety of sources without any real purpose. There’s a creepy caretaker, a beautiful young ingenue with a troubled past, a series of poorly-thought-out ideas and a moustache on Meat Loaf that was surely stolen from an old Mack Sennett prop box. They missed out on a great opportunity by not having his character don a top hat and tie Camilla to the railroad tracks.

The songs in Stage Fright are often quite good, especially when farce is avoided, but there’s an unfortunate reliance on the upper register in songs spoofing the Broadway version of “Phantom of the Opera,” and it just doesn’t play. The singers strain and miss by half a tone; in a spoof, one can’t be sure if this is bad singing or done by design, but as the rest of the song in question plays straight, one has to assume the latter. Many of the Phantom’s rock songs are solid both musically and as vehicles for satire, however, and are certainly the film’s strong points.

Ultimately, Stage Fright suffers from the dreaded tonal inconsistency and a fatal case of boring. Opening with a fine and genuinely creepy flashback that segues into a broad spoof works well, but once the final bars of “I’m Gay (But Not That Way)” fade out, the film is concerned with nothing except setting up for the camp’s production of “Haunting.” It’s bland and tedious and, worst of all, rushed, all in the service of making the entire third act the payoff. Stage Fright is a big old jumble of a mess, never committed, rarely entertaining, and occasionally incoherent.