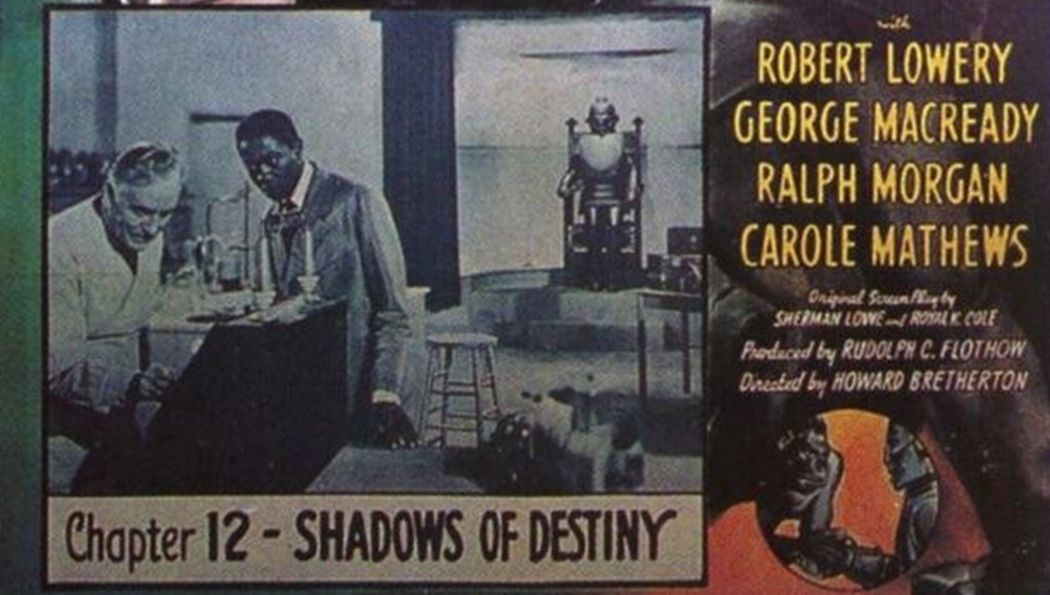 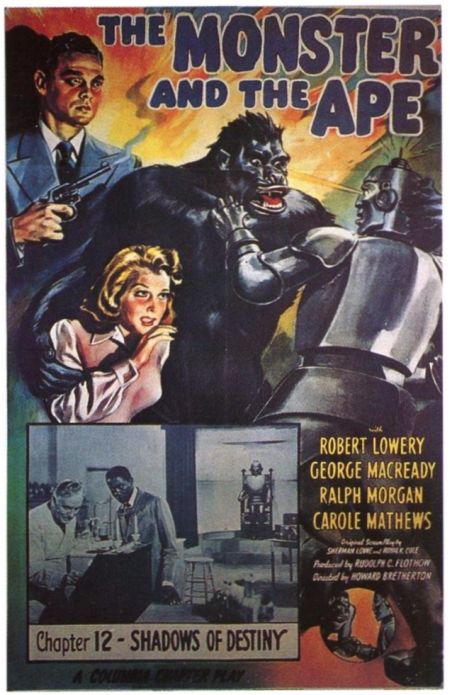 The Monster and the Ape #12
The Shadow of Destiny

Our excitable narrator has apparently fueled up with a quick snack between the last chapter and this one, as he manages three or four sentences during the recap, which is not only more than usual, but actually helpful, considering the footage of the first third of this chapter looks like this: 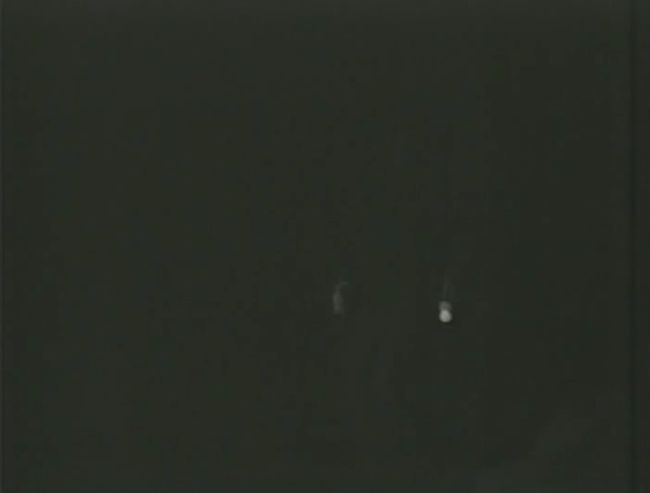 I question how visible this footage was when it was new.

As you will recall, Ken caught Ernst’s henchman Mead trying to infiltrate his dig in the sewer tunnels, hoping to discover if Ken had discovered the Metalogen buried within. Ken found Mead out, beat him so hard he said a dirty word in a kids’ serial, then believed him when he promised to show Ken the location of the Metalogen disk. Or Ernst’s control for the robot, I’m honestly not sure. This time in our recap, when Mead tricks Ken into standing on a trap door, we see Mead close the lid and scurry off to brag to his co-workers. They all pile out of their secret hidden room to look at the funny Ken drowning to death, but the cops arrive, so they scurry back. 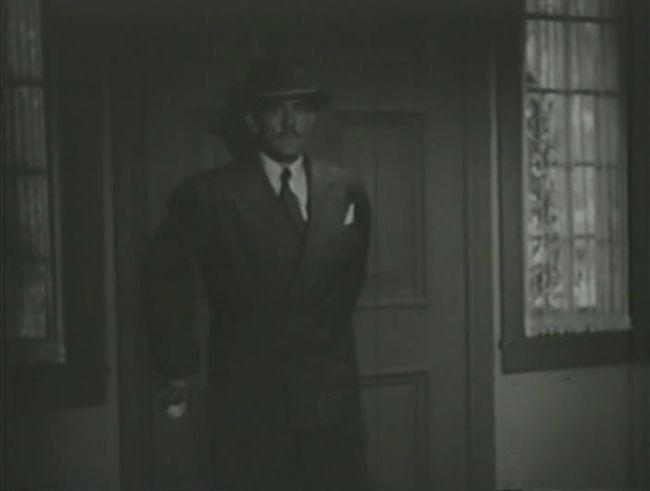 It’s the return of the Existential Detective! And he’s looking right at us!

Ken has climbed out to the edge of the pit just under the door and, despite having no way to see or hear the detective, nor any idea of what specific mechanism controls the trapdoor, tells him to find the lever and switch it to “open” so he can get out of there. The detective, completely unfamiliar with this underground Phantom-esque lair, finds the lever immediately and rescues Ken, then sends him home for dry clothes. And Ken finds his way out of the place without a flashlight.

That’s how this whole fershlugginer episode goes, folks. I honestly thought this week would be chapter 13; when I saw I was only on chapter 12, I’m not going to lie, there were tears.

At this point we’re already several minutes into the chapter, by the way, because a lot of footage of walking is used to pad this out. It’s not as bad as that parking lot walking from Hot Rods to Hell I frequently mention, but it’s close.

Ken makes it back to the lab in the exact same tweedy suit he’s been wearing for the entire serial, and yes, even when he was dunked in a well — that thing must be pretty ripe by now — and brings Professor Arnold up to date. Arnold is his usual downtrodden self, saying that continuing to look for Metalogen is useless. Ken disagrees vehemently and smugly, and literally less than two seconds after his little chewing out of Prof. Downtrodden, a worker from the tunnel arrives with… 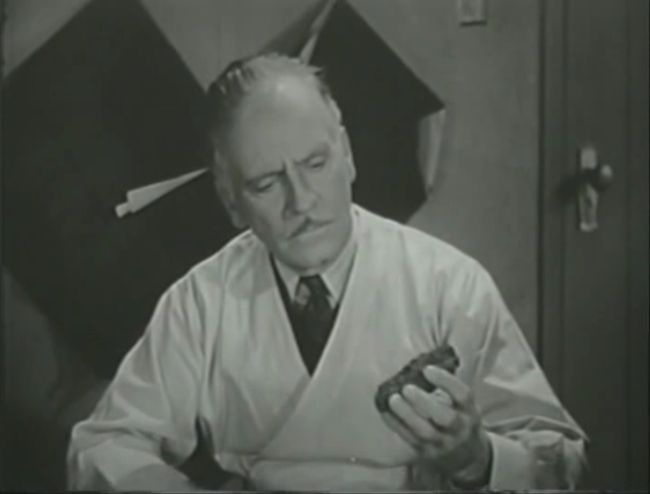 Metalogen! The look on Arnold’s face is absolute gold. Just try and tell me that is not the face of a man who is mentally calling Ken a smug son of a bitch.

Anyway, Arnold proves it’s Metalogen by liquifying the rock and jamming the resulting fluid into a machine that is used to control the robot. The Prof lets Flash control M-bot for a bit in an effort to teach Flash that the robot is harmless. When he leaves, he tells Flash to put the robot’s Metalogen buttdisk into a safe, but Flash decides to take his new big metal best friend for one more spin. 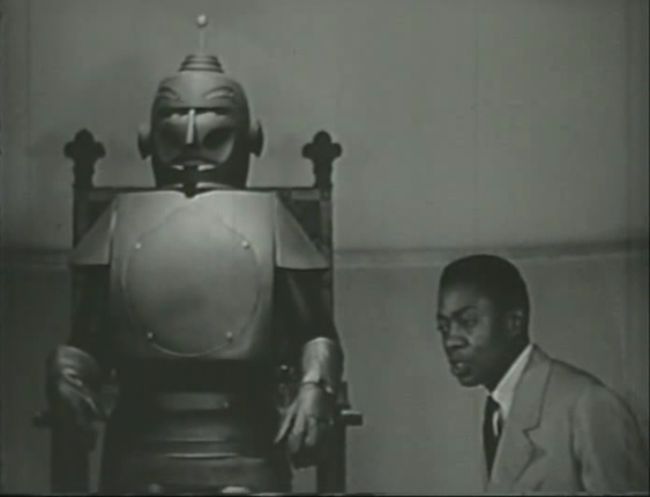 Unfortunately, Ernst also has a control device, as you may remember. Once the baddies see their device light up, they realize the robot is working in Arnold’s lab, meaning he’s obtained Metalogen. Ernst then decides to be El Dicko Ultimo and remotely controls M-bot, trashing the lab and scaring the hell out of Flash. Note that these M-bot scenes comprise more walking around doing nothing filler for the serial. About six minutes of this episode is taken up by walking, no joke. 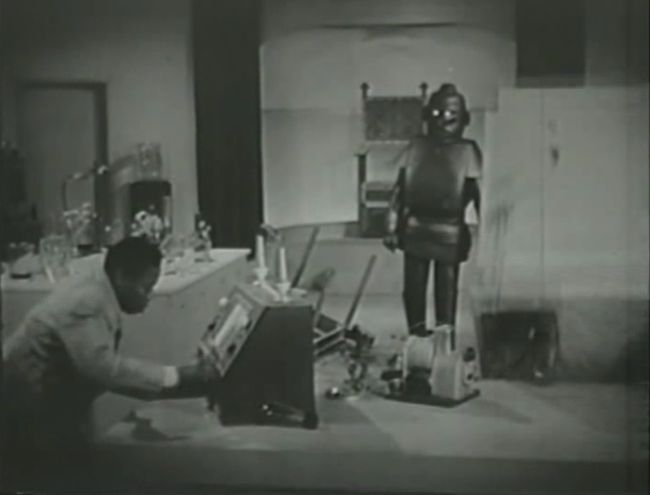 As M-bot rampages, Babs arrives and pulls the Metalogen buttdisk off, and we leave the scene as she’s gearing up to yell at Flash for daring to commit a little robot science in a robot laboratory.

Ernst knows that there’s only one place in town that can liquify/smelt/whatever the hell they’re doing to the meteor rocks to extract Metalogen, and one of his henchmen knows a guy who knows a guy, so they plan on waiting until they hear Arnold has sent a load of meteor rocks to the local Dü Smëlt franchise (“We Smelt Your Bits In Under An Hour!”). Okay, seriously, I have no idea what exactly is going on, but I suspect that big rock pit of molten something-or-other from the abandoned paint factory will be involved. 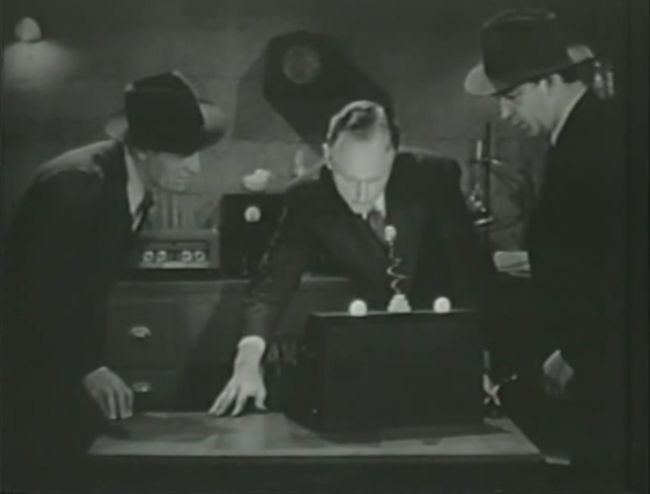 Learning that Arnold has dropped his load off at Dü Smëlt (I am not even remotely sorry for anything in this sentence), Ernst arranges to pretend to be the bank vault manager, an unseen character whose name is John Gilbert; they make sure to mention his name prominently and frequently. What does this even mean?

Ernst jams the frequencies of the armored truck that is bringing the rendered Metalogen to Arnold’s bank for safe keeping and pretends to be… John Gilbert. He directs them to an abandoned brick factory, which they fall for, because serial. But Ken realizes the truck hasn’t arrived on time, so he goes to hop in a car to search for them; Babs, unfortunately, has put her car in the shop, and Ken is forced to take a cab.

And why did she send her car to the shop in the middle of such an important day? So this pilfered stock footage could be used to represent Ken’s taxi being T-boned by the truck carrying the Metalogen. 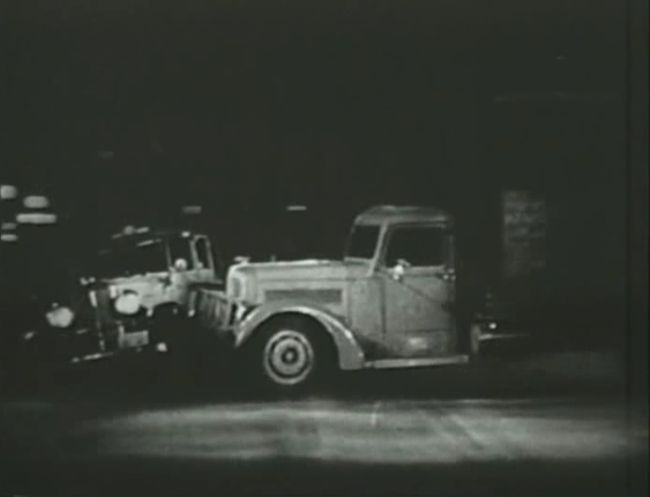 Please don’t ask me how this happened. I’ve worked through this a dozen times and it does not make any sense. 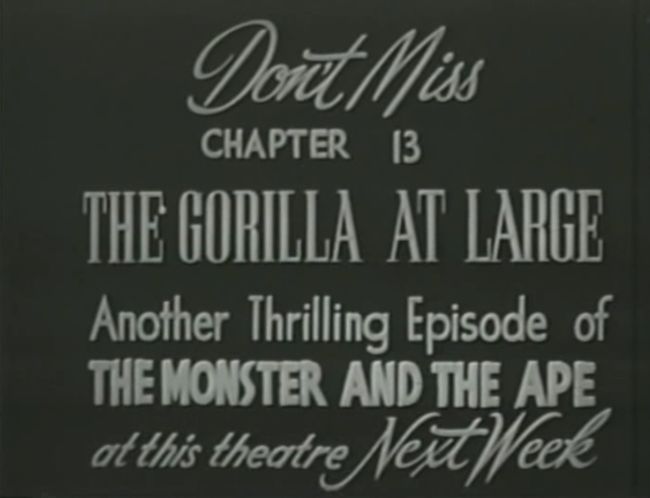