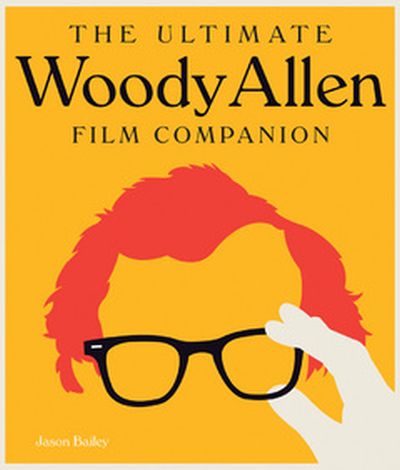 Jason Bailey’s The Ultimate Woody Allen Film Companion is a handsome book, solid and oversized, perfect for the coffee table with its striking Brad Norr Designs cover art and clever use of That Font. You know the one: EF Windsor Elongated, Allen’s typeface of choice for the majority of his films. Or maybe it’s EF Windsor Light Condensed. It’s a font; therefore, it’s complicated. But it’s unmistakable, just like Woody Allen himself, one of the most recognizable and important auteurs of American cinema.

The Companion is a delightful, comprehensive and indispensable guide Allen’s oeuvre. It’s organized chronologically, each of the director’s films getting from two to five pages devoted to it exclusively, with fast facts in a sidebar on the left, a few pictures, some trivia and film quotes, and a little box on the right where Woody bitches incessantly about his own movies. Those quotes alone are worth the price of admission; as funny as Woody Allen is, he’s funniest when he’s not trying to be funny. On Deconstructing Harry (1997): “I didn’t dislike it.”

Coming just a year after the release of his excellent book on Pulp Fiction, Bailey’s writing has taken on a more mature, confident tone. There’s an efficiency that remains entertaining, with a playfulness that shows in some light puns and a few little callbacks here and there that display a solid knowledge of Allen’s work and influences. Bailey has a terrific way of putting complex concepts into perspective in just a few words, without the dryness or self-importance that sadly affects far too many film books.

The Companion also features plenty of photos and promotional items you’re guaranteed to have never seen before, many that come from the Voyageur Press Collection. The pictures are a little small, though, and it would have been trivial but very, very nice had Voyageur added, say, eight more pages to the book, all dedicated to larger copies of some of the best photos of the lot.

There are charts and lists galore, plus several lengthy essays by Bailey included amidst the film facts and summaries, as well as guest pieces by David Detmer, Ezra Glinter and others. Jason Gubbels’ piece on the music that appears in Allen’s films is tantalizing but far too short, given the expansive nature of the topic, and inadvertently only heightens Allen’s puzzling jazz choices. Let’s just say that, for a man who knows who James “Bubber” Miley is, he sure does rely on a lot more Benny Goodman, Tommy Dorsey and Bix Beiderbecke than one would expect.

On the issue of that elephant sitting in the corner, the one that will always be in the room when Woody Allen is mentioned: The Companion says from the introduction that the “scandals and accusations” will not be discussed in depth. Yet the book promises in the same introduction to dig into the biographical elements of Woody’s films, and as such, the Companion cannot entirely ignore the biggest scandals and troubles that inform both his public persona and his art. The essay, “Woody the Actor, the Character, the Persona,” plus lists of surrogate Woody characters in his films and numerous quotes, make it clear that Allen’s films are indeed autobiographical to a large degree.

As such, the sections on Manhattan (1979) and Husbands and Wives (1992), unsurprisingly, go the deepest regarding the molestation accusations against Allen, and his affair and later marriage to Soon-Yi Allen (née Previn). Mia Farrow, Diane Keaton and Louise Lasser are mentioned regularly both as colleagues and as romantic partners, though regretfully, Farrow and Lasser are treated more harshly than anyone else. There are some troubling quotes about Lasser’s mental health, and claims made about Farrow that may not be outright lies, but because of careful wording or a certain vagueness, paint her as vindictive.

Life is complicated, humans more so, and it’s not playing fair when that complexity isn’t fully revealed, and the choice is made to approach the truth from a single, more flattering, angle. When it comes to a book like the Companion, it’s not about whose “side” you’re on regarding Allen’s scandals, but about reporting the facts with the least amount of bias possible. Analysis and understanding of art should not be influenced by politics or public relations. That said, we are, perhaps, not far enough away from these scandals, and the Companion didn’t have the luxury of the distance needed to completely lack bias.

The treatment of Allen’s myriad personal issues is not flawless, but also not enough to negate the book’s worth. When it comes to the films themselves — the main focus of the book — the Companion is even-handed and honest, and there is plenty about Allen in the book that the director would probably wish would have been glossed over or outright omitted. There’s plenty here for fans, too, and those just discovering the director’s work. The Ultimate Woody Allen Film Companion is a rare thing: a solid resource that is also beautiful and fun.