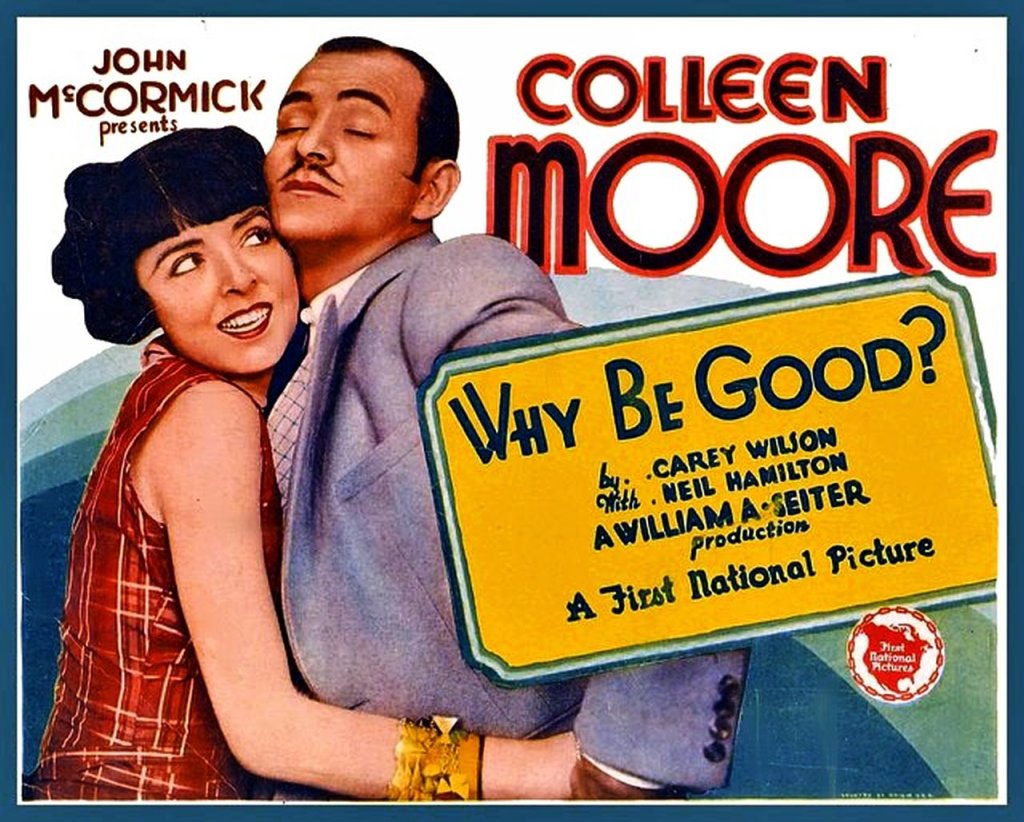 The son of a millionaire department store owner is throwing a bash on his last day of “freedom” in 1929’s Why Be Good?, the long-lost silent film, recently restored and released on DVD by Warner Archive. What this rich kid means by “freedom” is really “being almost 30 and only just now being expected to work for a living,” which is why his father’s spacious, expensive and booze-filled home is packed with partiers in various states of sobriety and humor. Despite the horrors he must endure in the morning at (gasp!) work, Peabody (Neil Hamilton, never given a first name for reasons that are unclear) trudges on, hitting a hot local night spot for some last-minute revelry.

Elsewhere in town, perky Pert Kelly (Colleen Moore) is winning a Charlston competition. She’s mouthy and arrogant and seemingly willing when it comes to swells who are interested in her, but she always seems to be making fun of the poor pomaded fool she leaves the competition with. Later, we learn it’s because she’s crafted a reputation for herself, a little sexual street cred, if you will, though it takes far too long for that to be revealed for us to really be in on the joke with her.

Still, it’s with that reputation that she meets the junior Peabody at a completely bonkers night club known as The Boiler. Our rich alleged hero falls for her as hard as she falls for him, only to later discover she’s a clerk at his department store, and fraternization with the employees is strictly prohibited by the elder Peabody. Pert is fired without Peabody’s knowledge and trouble, as they say, ensues. 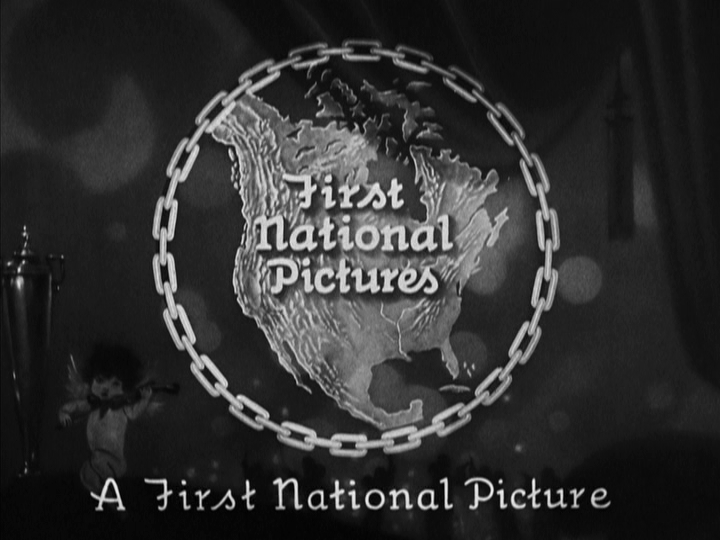 The First National opening title. Either I have never seen this particular title before or I’ve never seen one so well preserved that I could make out that creepy little cherub guy in the bottom left corner.

Why Be Good is a light romantic comedy, so light that the New York Times called it “an antedated problem play, the problem of being of such proportions that it easily could be lost on a pinhead.” They’re not lying, folks: the first half hour is nothing but dancing at night clubs or fabulously appointed art deco apartments. But these sets are marvelous to look at, with the details and sharp angles of films from the same year, such as Alibi and Night Parade, though with a much more professional look. All the common tropes are there: misunderstandings, cranky parents, good girls thought to be bad, and irritating but hilarious and drunk pals. 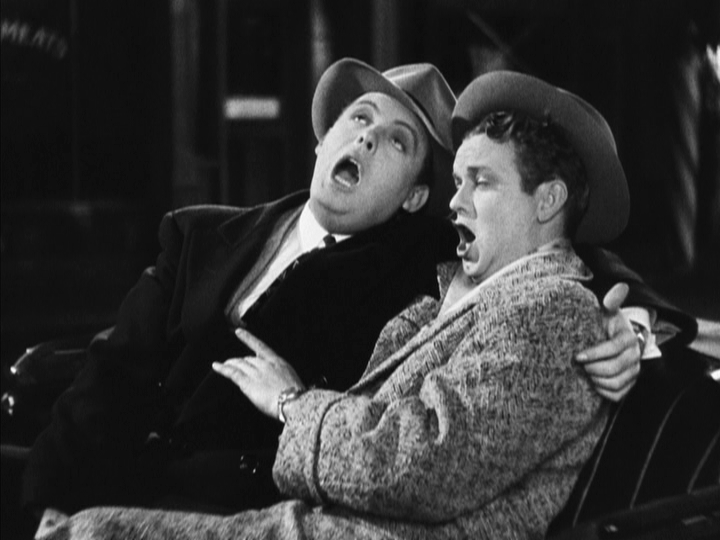 No one will ever settle who the one true cinematic flapper of the 1920s was, but on any list, Colleen Moore would have to be near the top. Flaming Youth (1923) solidified the image of the flapper in the public’s eye, but flappers had already originated in 1920 with Olive Thomas. Prior to Flaming Youth, Marie Prevost had appeared as the visual representation of flapperdom on magazine covers, including the inaugural issue of the short-lived The Flapper Magazine (“Not For Old Fogies”) in 1922. A dozen other actresses, often Bathing Beauties, portrayed flappers on screen before Moore ever did, and the same year Flaming Youth was released, Clara Bow appeared in a distinctly flapper-like role in Black Oxen (1923). 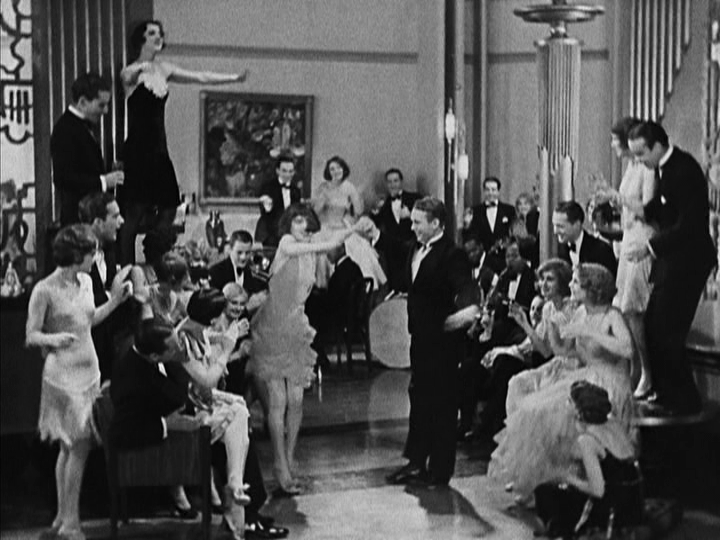 The next year, Clara Bow would become the new hot movie flapper, and she and Moore would be considered rivals for a time. When she co-starred with Colleen Moore in Painted People (1924), it became clear just how threatened Moore felt by Bow’s flapper image when she demanded Bow be given absolutely no close-ups in the film. After that incident, Bow felt she had no choice but to quit Painted People.

Moore finished Painted People and went on to do The Perfect Flapper and Flirting with Love before tackling a different and dramatic role in So Big, the first of three adaptations of Edna Ferber’s classic novel. By now reportedly feeling unable to compete with Clara Bow, who had taken America by storm, Moore announced to the Los Angeles Times in May of 1924: “No more flappers!”

But yet, here in 1929, she’s playing a flapper once again, and in a film so blatantly stolen from Clara Bow’s classic It (1927) that a Bow lookalike has been cast, and there’s even a pun referencing It early in the film. It should also be noted that at 30 years old, Moore is far too long in the tooth to be playing a girl still living at home with a curfew and all her babydolls on the dresser. If people laughed at Moore in her serious scenes in So Big, as a pseudonymous audience-goer at the time claimed, they certainly wouldn’t have been kind when Pert Kelly was threatened with reform school, a punishment reserved for girls half her age. 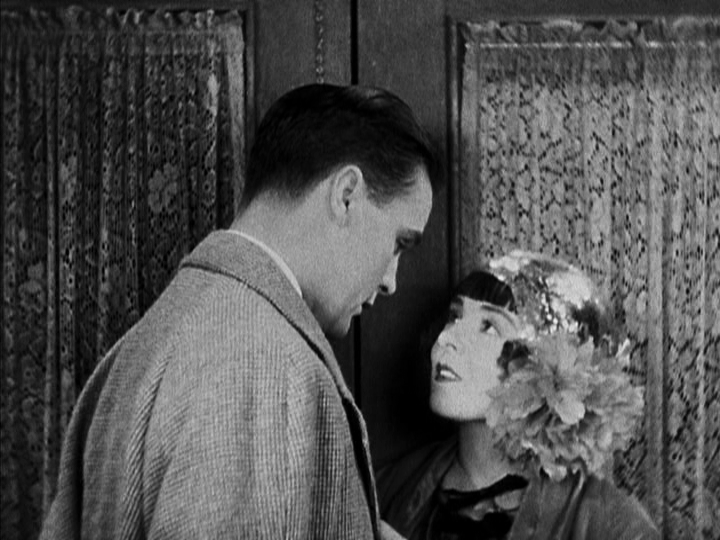 One of the reasons cinephiles have been so excited about the release of Why Be Good is the presence of Jean Harlow as what Ron Hutchinson of The Vitaphone Project writes is “a prominent dress extra.” Harlow appeared in several films as extras at this time, before moving quickly on to small but featured roles. Her looks were much commented on nearly everywhere she appeared; William Seiter reportedly told Colleen Moore, “You’ve never seen anything like it!” about Harlow on the set of Why Be Good.

But if Harlow is in the film, let alone prominently, I cannot find her. (Queries to Ron Hutchinson were met with what I will generously refer to as no response.) Given Harlow’s appearance in 1929 was pre-makeover and pre-nose job, and my notorious difficulty in recognizing actors when their faces aren’t completely clear, my inability to find her maybe isn’t such a surprise. That said, other background players like Grady Sutton, seen below in an early party scene: 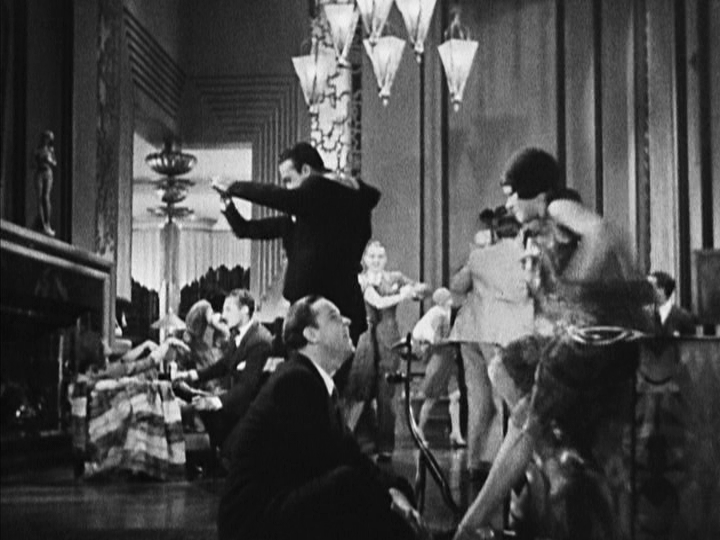 and Mischa Auer, visible several times throughout the scenes in The Boiler: 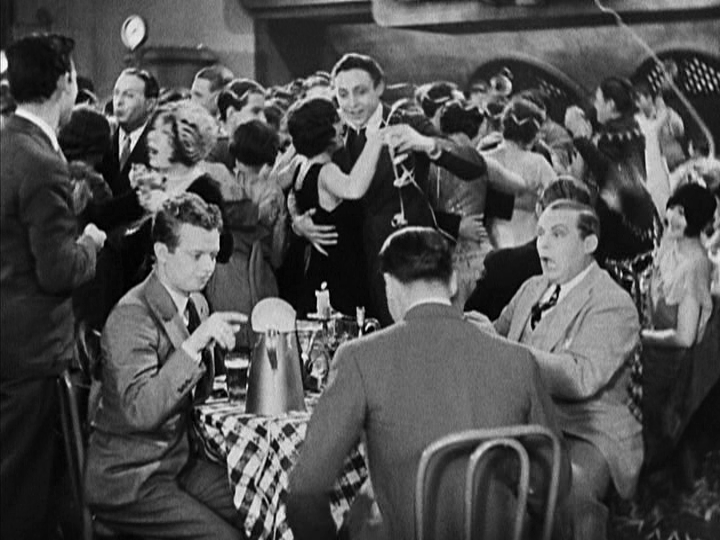 are easy to spot. Perhaps a screen shot of Harlow will surface eventually, and we’ll find her.

UPDATE 03/03/2015: A screen shot did surface, finally; here’s my own which I think has about the best view of her face you’re gonna get. Harlow is a distant background extra about 1 hour 10 minutes and 30 seconds into the film: 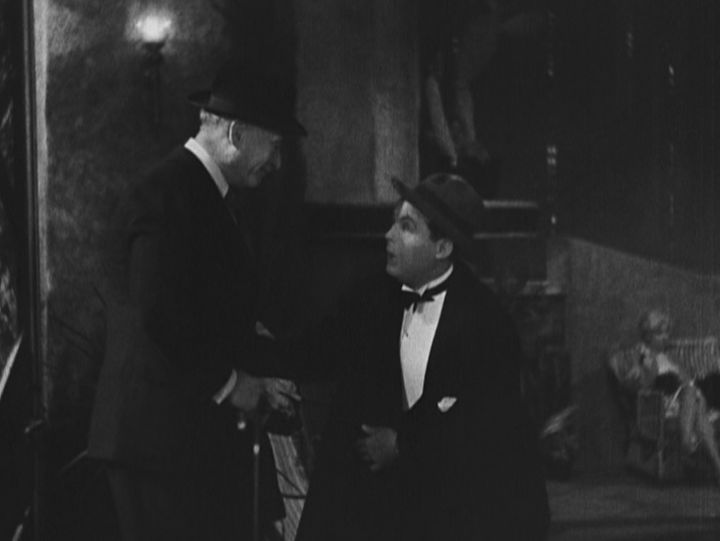 She is never any closer to the camera nor particularly visible, though once you’re told it’s Harlow, you can see it. I question how she could be considered a “prominent” dress extra or how sitting there in the background would have ever made such an impression on William Seiter that he would run to the star of the film to rave. But there she is. And now, back to the review:

Why Be Good was released in early March of 1929, very late in the silent era. To put that in a bit of perspective, David Pierce notes in his 2013 report “The Survival of American Silent Feature Films: 1912-1929” that almost all of the first-run feature films on May 16, 1929 — the date of the first Academy Award ceremonies — were talkies. The New York Times review of Why Be Good lists other films also showing that same week: Bulldog Drummond, The Broadway Melody, Alibi, and the musical The Singing Fool.

It would be accurate to say that Why Be Good was a little outdated for the time. It would also be the last silent for Colleen Moore, one of the most popular actresses of the era, beloved and the recipient of a reported 10,000 fan letters in 1926 alone. Despite her popularity, she became just one of the many actors who could not transition to talkies. Though her voice was fine — she acquits herself admirably in The Power and the Glory (1933) — she simply could not weather the cultural changes that made her, by the early 1930s, the representative of an already-bygone era. 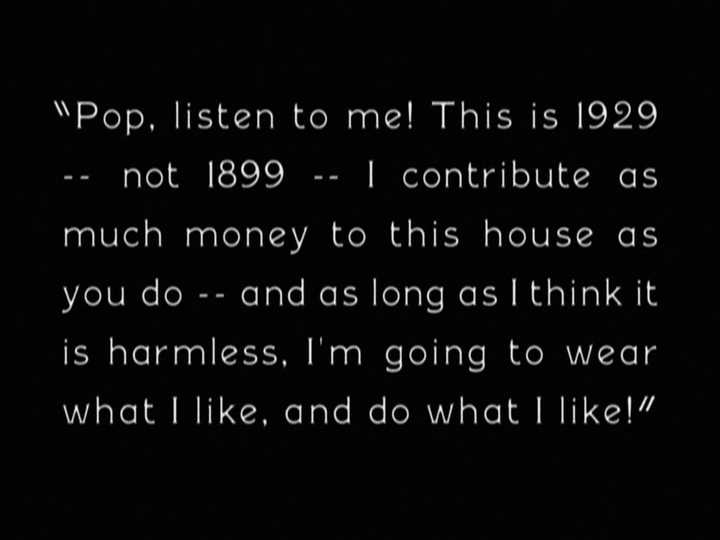 Pert has a couple of speeches along these lines which are some of the best moments in the film. They also, as you can imagine, would make certain eyebrows raise, even today. G*mergaters wouldn’t want to watch Why Be Good, is what I’m saying here.

The studio, fully aware that talkies were where it was at in 1929, added a Vitaphone score full of peppy jazz numbers and sound effects; the Vitaphone disks were available for decades before the film itself was made available to the public at large. Per The Vitaphone Project, these musical numbers have been identified as featuring Jimmy Dorsey, Phil Napoleon, Eddie Lang and others. The soundtrack is unquestionably one of the best features of Why Be Good, with fun renditions of everything from “Sweet Georgia Brown” to “Sweet Adeline” to something where a guy sings into a megaphone, probably while wearing a sporty sweater and loads of Wang Hair Pomade (“For Men Only – And Women With Short Hair”).

In fact, it was the existence of these Vitaphone disks that lead to the discovery that the film was not lost, as most had assumed. From Ron Hutchinson:

About 10 years ago while introducing one of my Vitaphone shows at NYC’s Film Forum, I mentioned I had just acquired the Vitaphone disks (music and effects) for this feature but, sadly, the film was lost. Film historian Joe Yranski was sitting in the front row and yelled out “No it’s not! I know where it is!”. The crowd cheered, and so began a decades-long effort to get the film back to American and restored. I’m happy to report that in a joint effort by Ned Price and Warner Brothers, the Bologna Archive in Italy, Joe Yranski (who knew Colleen Moore) and The Vitaphone Project, this film is now being restored.

Warner Archive has recently released Why Be Good? on a basic no-frills DVD in what is a really lovely looking print. There are some fluctuations in contrast and light that aren’t very noticeable, and seem to be the product of restoring a less-than-stellar print and making it look beautiful. There is literally nothing to complain about with this transfer. The sound from the Vitaphone discs is terrific and syncs perfectly (if you’ve seen any restored late-era silents, you’ve seen poor synching, and you know how irritating that is) and the images are crisp and gorgeous.

Why Be Good is fluff, but it was never intended as anything but. It’s a lot of fun, a great listen and a lost film now easily available on DVD. You want more? You don’t need anything more. Stop being greedy and go watch Why Be Good.

Lobby card scan “Among Sinister Shadows,” the final (and one of the best) articles on the now-defunct Vitaphone Varieties.