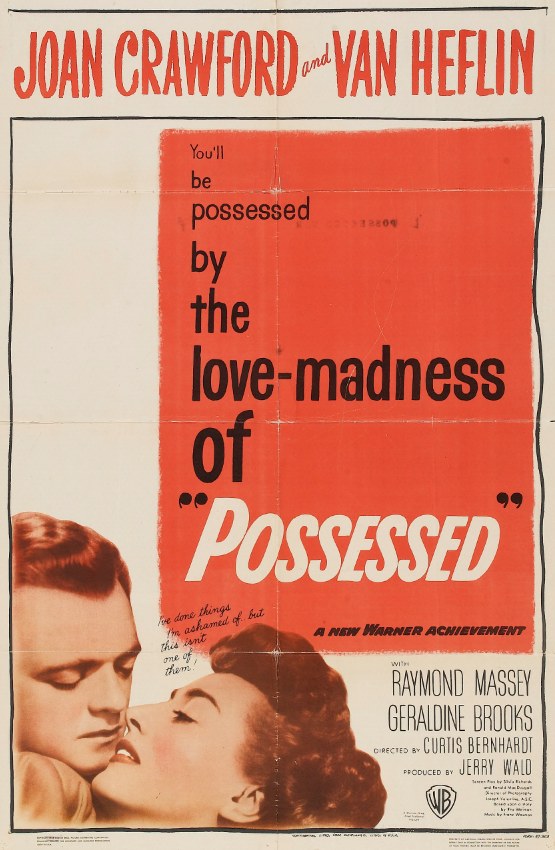 Possessed (1947) was the third of Joan Crawford’s films for Warner Bros., the studio who snapped her up when her long-time home MGM, where she had been since the silent era, decided to cut her loose. Crawford was one of the few, if not only, actresses who managed to weather a host of problems that killed others’ careers: she transitioned to talkies without incident in the late 1920s, overcame the label “box office poison” in the late 1930s, and then, in the mid-1940s, managed to survive being let go from one of the big two studios in Hollywood. And boy did she survive! Her first real film for Warner Bros. was Mildred Pierce (1945), a box office smash that won her a Best Actress Oscar.

Her next two follow-up films were terrific, too, and Crawford, for maybe the first time in her career, was shown to be capable of depth and true acting ability. Still the glamour queen in Mildred Pierce and Humoresque (1946), it’s Possessed where Crawford gives her most astonishing performance as an aging nurse with a burgeoning mental illness. She’s still Joan Crawford, and even without her false eyelashes and heavily penciled eyebrows and intricately applied lipstick, she’s glamorous. She is, in fact, the most glamorous middle-aged spinster nurse to ever appear on the big screen. But if anyone could prove that talent and glamour could go hand in hand, it was Joan Crawford.

Louise Howell (Joan Crawford) is found wandering the streets of Los Angeles, pale and disoriented and thousands of miles from home. After she falls into a catatonic state, psychiatrist (Stanley Ridges) of the L.A. Municipal Hospital attends to her until she regains consciousness, and urges her to tell her story, which she does: about a year prior, she had been having a wonderful fling with David Sutton (Van Heflin), an up-and-coming architect. But he’s more interested in his career and playing the field, and he breaks up with her, stirring in her anger and jealousy and possession that had never surfaced before. At the same time, the woman Louise had been caring for drowned under strange circumstances on Louise’s day off. The woman’s husband Dean Graham (Raymond Massey) encourages Louise to stay on with the household, which she does, hoping to run into David again, as he is now working with Graham on several projects. But as the months go on, Louise begins to lose herself in violent reveries, torn between the older Dean, who truly loves her, and her own love for David, who is equal parts handsome, charming, selfish and callous.

Warner Archive has just released Possessed on Blu-ray, a new print that, by all accounts, is of exceptional quality. I qualify my statement because this is the first pre-1970 black and white film I’ve ever owned on Blu-ray, and I had some concerns about the image quality, while Blu-ray.com and Hi-Def Digest both indicate that the image quality — 1080p, AVC-encoded — was quite good. (For reference, I have an LG LED 1080p 120Hz television.) I noticed that much of the film looked exactly like it does when I take a screengrab from a high-quality DVD and hit “sharpen” a couple of times in my photo editor. Other scenes, primarily the overlit scenes in the hospital, had so much grain — not film grain, but a layer of what almost looks like old-timey interference from analog transmissions over everything — that it was distracting.

To my everlasting shame, I’m unable to get a proper screen grab of a Blu-ray, so this one borrowed from Blu-ray.com will have to do as an illustration: 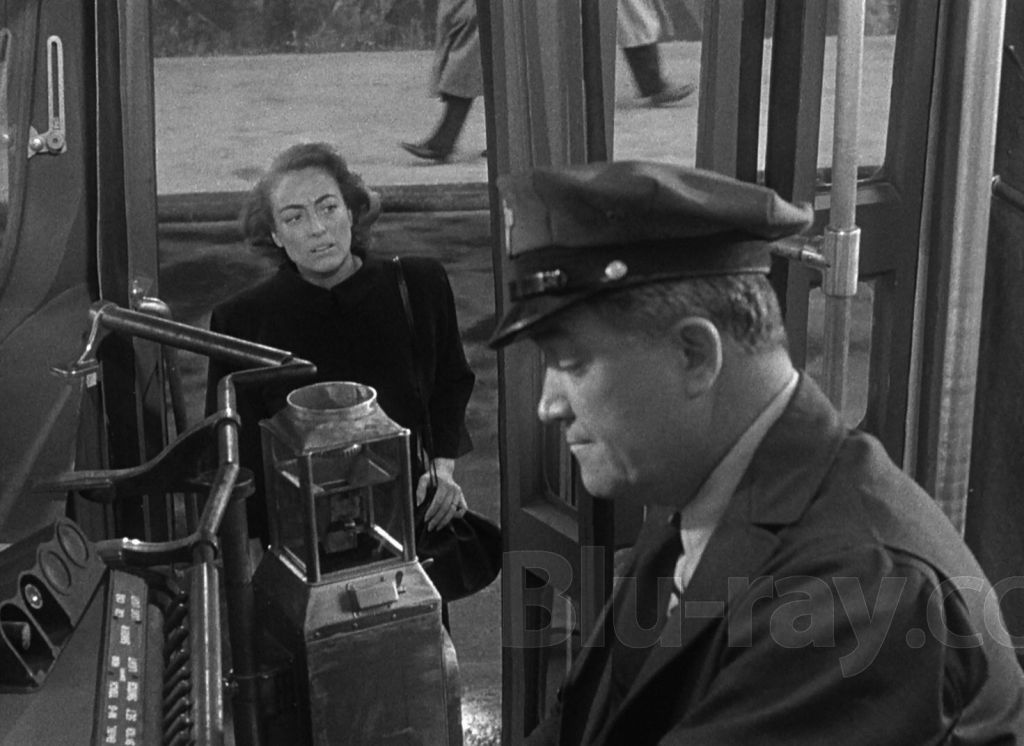 All that said, other scenes looked terrific, and I’d say 80% of the film or more was better than I’ve ever seen before. This was the first time I ever really, truly saw how worn Louise’s shoes in the opening sequence were, and I was astonished how perfect the bluescreen work in this film looked on Blu. It was tremendous, and even with the graininess and over-sharp edges on some images, there were times when it looked so clear you felt like you were right there on the set. This is not always to Van Heflin’s advantage, as he appeared to have a little assistance with his hairline, if you get my drift, but every single person on screen looked amazing.

More images are here and here, and for those interested in buying the set, I highly recommend checking them out. Those are reviews from professionals who understand high definition and Blu-ray more than I ever will, and should be considered more authoritative sources on this subject than I am.

The Blu comes with special features that are the same as the 2005 DVD release in “The Joan Crawford Collection.” Included is commentary from professor Drew Casper, who spends much of his time on a “close visual analysis” of the film. While interesting, Casper, for whatever reason, feels the need to tell you everything. EVERYTHING. Also included is the featurette “Possessed: The Quintessential Film Noir.” It’s a nice featurette and well worth the watch but, to pick a little nit, Possessed is a fine film noir but not the film noir to end all films noir. 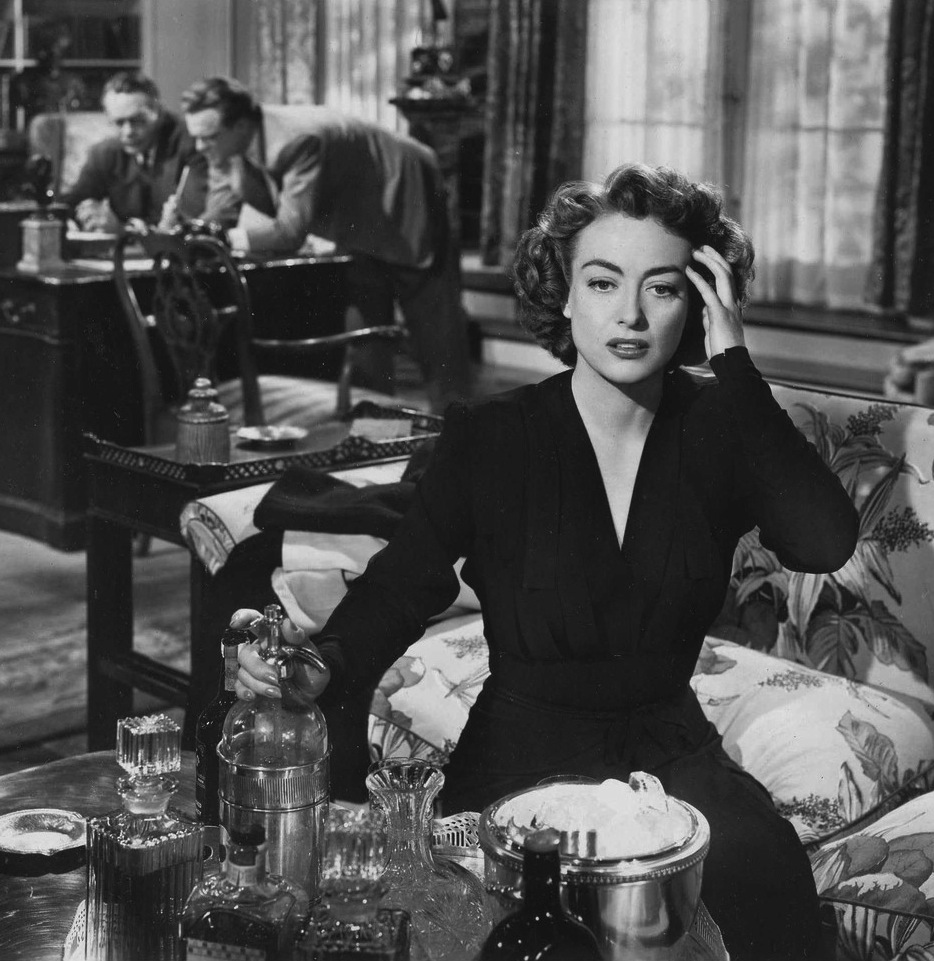 What Possessed is, is an extraordinary drama from a sadly undervalued cinematic era. It’s a transitional piece in a lot of ways, not quite classic film noir from earlier in the decade, and not nearly as melodramatic as films of the 1940s had been up until that time, but not as fully realistic as films later in the 1940s and especially the 1950s would become. It’s a terrific example of how post-war Hollywood was starting to shrug off the shackles of the Production Code, however. Given the kind of mental illness Louise suffers from and its ostensible cause, Possessed would have, just a couple years earlier, been all about hysteria and frustration. Some of that still seeps through, but this is a post-war, post-Now Voyager look at women and mental illness, and there is a sophistication and sympathy here that is hard to come by in the 1940s. Though mostly unspoken, Louise is hit just as hard by the limitations in opportunities for women in the 1940s than she is by being unceremoniously dumped.

Also of note are the films and performances Possessed anticipates. It would not be stretching things to say that Psycho (1960) was heavily influenced by the finale of Possessed, nor would it be out of line to suggest the more effective, sensitive moments in the 1960s “psycho-biddy” genre could be traced back to Possessed, as well. There are some fantastic technical moments in Possessed, too, camerawork that looks almost hand-held, some of the most unique sharp angles of light and shadow in any black and white film, and exceptional care in the sets and details. Watch for how many animals appear in background statuary and artwork, and which animals appear when, especially the horses.

Possessed is a terrific film, one that is rarely on must-see lists, but really should be. I’m particularly fond of Crawford’s mid- to late-1940s work — Daisy Kenyon, her next film, is sadly underrated — and this is one of my personal favorites. The DVD is terrific, but if you’re into Blu, you cannot go wrong with Warner Archive’s new release.